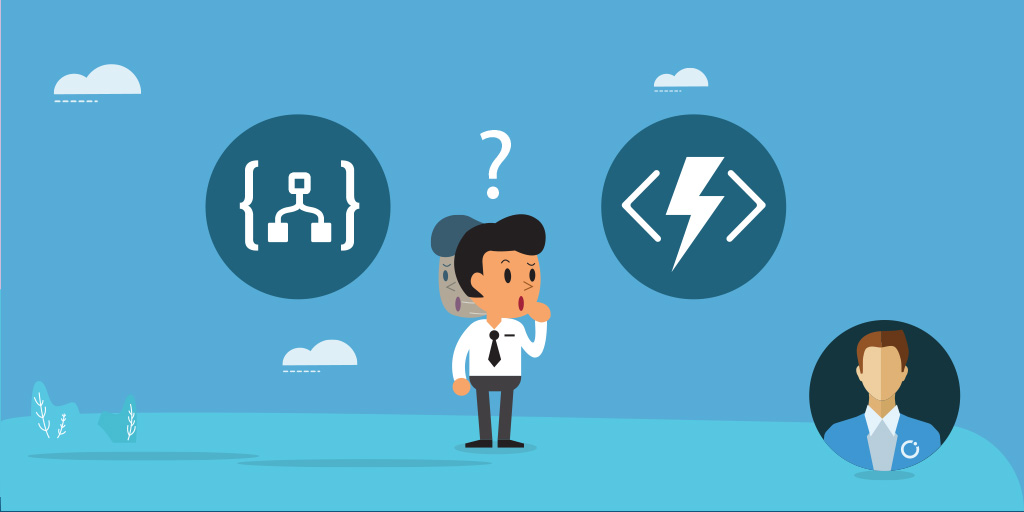 You can run a business workflow in Azure using the Logic App service. The Logic App is a logical container for one workflow you can define using triggers and actions. A trigger can instantiate a workflow, which can consist of one or many activities (actions). For instance, you can trigger a workflow by sending an HTTP request or schedule a workflow every hour to retrieve data from a public website.

A Logic App runs on the infrastructure of an Azure region (VM’s in a data center), not visible to you as it is abstracted away. By provisioning a Logic App, you leverage a bit of that infrastructure (indirectly via the Logic App Service) once you define a workflow and the flow gets triggered. Furthermore, you get billed by some trigger/actions that execute, and scaling done for you –  if the number of requests increases, so will the Logic App instances until certain boundaries are reached (see Logic App Limitations).

The Logic App service runs as said earlier on a set of infrastructure, and it consists of several components. Azure Functions are part of the Azure Web and Mobile suite of App Services and are designed to enable the creation of small pieces of meaningful, reusable methods, easily shared across services. You can build the Azure Function in various languages like Node.js, C#, F#, Python, PHP, and even Java. Followed by scripting languages, Bash, and PowerShell – and support for Command Line through a CMD or BAT file. Although an Azure Function can contain quite a bit of code. They are typically designed to serve a single purpose and respond to events in connected services.

The WebJobs SDK runtime, a framework that simplifies the task of writing background processing code that runs in Microsoft Azure, is the foundation of Azure Functions. Furthermore, Functions leverage a declarative binding and trigger mechanism, which works with several Azure services like Storage, Cosmos DB, and the Service Bus. Below you see a diagram of the components of Azure Functions.

For more information about Azure Functions read the Leveraging Functions on the Azure Platform blog post.

You can develop Logic Apps and Azure Functions in the browser and Visual Studio. The experience, however, is not the same – developing functions in Visual Studio is better than for Logic Apps – as the responsiveness of the workflow designer compared to the browser is slower. Furthermore, you generate code for a function, while you design workflow with Logic Apps. Moreover, you can view the latter as "no-code" or "low-code"  development.

With Azure Functions, you have more control and fewer limitations when you face complex scenarios or requirements as coding provides you with much flexibility, but also more responsibility. Logic Apps have predefined triggers (managed connectors) and actions. However, you can leverage variables, built-in expressions, or call-out to an API or Function (more later in working with Logic Apps and Azure Functions). Furthermore, you can build custom connectors for Logic Apps if the connector doesn’t exist. For functions, this will be harder if a binding is not available.

One of the fundamental concepts of Logic Apps is connectors – bringing connectivity to the workflow. The connectors provide a means to trigger a workflow and a payload into or out of the flow. Microsoft has built an extensive set of connectors ranging from Azure Service to popular SaaS solutions. Furthermore, Microsoft continues to invest in developing more and more connectors. In case a connector doesn’t exist you can build a connector yourself through the custom connector template in the Azure Marketplace.

Each connector you choose when defining a workflow comes with an API connection (connectors are a wrapper around an API and operations) and requires credentials stored securely. Once you have chosen a connector and done the authentication, you have what is called a managed API connection, which you will see in the resource group where your Logic App resides. Moreover, you can reuse these connections in other Logic Apps.

Azure Functions do not have connectors, yet rely on triggers and input and output bindings – like Storage, Event Hubs, Service Bus, and Cosmos DB. Bindings in Azure Functions provide a way to connect to data with code declaratively – you define them by specifying a connection string and other properties depending on the binding you choose. Furthermore, you can extend the bindings by leveraging the extensions available in the WebJob SDK.  The list of bindings is limited compared to Logic Apps.

In the previous paragraph, we mentioned authentication for Logic App connectors and connection strings for Azure Function bindings. Every connector comes with its security depending on what API it exposes, for instance, the Dynamic 365 connector requires a Dynamics Account to be able to sign in to Dynamics 365. Or to access a Logic App via an HTTP endpoint, when you use the HTTP trigger for your workflow, the client must include a so-called Shared Access Signature in the URL – generated via a secret key that can be regenerated at all time. Furthermore, you can secure the Logic App by placing Azure API Management before it. See also Protecting Azure Logic Apps with Azure API Management on the BizTalk360 blog and Middleware Friday.

With Azure Functions the security is different – you can secure accessible, public functions (HTTP and WebHook Binding) with Authorization keys. These keys are generated when you create a function and can be regenerated. Furthermore, you can leverage authentication functionality through the general setting with Azure Active Directory, Google, Facebook and others. On top of your HTTP/WebHook triggered functions you choose the lightweight Azure Functions proxies or API Management.

Since the inception Azure Functions are stateless, accept data from an input, processing it, and then handling appropriate actions, i.e. one or more outputs – the function acts as a single software switch. However, this has changed with the release of "durable functions" or what Microsoft calls “orchestrator functions.” With Durable Functions, Microsoft provides state and long-running capabilities for Azure Functions, by leveraging the Durable Task Framework. Moreover, durable functions allow sequential and parallel execution of several Functions, support long-running tasks with pre-defined timeouts, and provides stateful actors without the need for external storage. The state is automatically stored in through the belonging Azure Storage account in Storage queues, tables, and blobs, which is disaster proof. These long-running and stateful processes are inherently available in Logic Apps, except for the stateful actor model.

The consumption model for Logic Apps and Azure Functions provide a specific auto-scale capability, i.e. when your load increases the Logic App or Function can scale with it to a certain point. Logic Apps can scale depending on the connector(s) you use, for instance, the File System connector current limit of 100 calls per minute.

Having an App Service Plan instead of a consumption plan depends on your requirements for more processing power that exceeds the consumption plan, or you need to support scenarios where for instance your function apps need to run continuously.

With deployments of resources in Azure, you can think of the Azure Resource Manager (ARM) templates. This also accounts for deploying Logic Apps and Azure Functions. Both have built-in support for these templates. You can automate the deployment of Logic App through the Azure Portal leveraging the automation script or by using Visual Studio.

With Azure Functions, you can quickly set up continuous deployments through triggers from sources like Bitbucket, Dropbox, Git, GitHub, OneDrive, and VSTS (see for example Leveraging Functions on the Azure Platform blog post). Additionally, Azure Functions have deployment slots in the preview, allowing deploying and testing a vNext first, before you swap the tested deployment slot with the current version in production.

You can monitor both Logic Apps and Azure Functions with the available Azure monitoring capabilities (OMS, Application Insights, Log Analytics) and built-in features.

Logic Apps provides a run-history feature enabling you to examine specific runs in full detail. Also, you can filter this history, based on a period and the resulting run status. Furthermore, Logic Apps integrates with Operation Management Suite (OMS) in Azure – for instance, with one-button click, you can enable integration with OMS, where you can search for tracked properties.

With Azure Functions you have access to the monitor tab, here you can see the execution history. Besides that, there is a live event stream that shows the almost real-time processing statistics in graphs. Furthermore, there’s full integration with Application Insights, where you can take advantage of the powerful Analytics queries.

When comparing Logic Apps and Azure Functions, both can run under a consumption plan. That means both have a pay-per-usage billing model.

In case you leverage the integration account with your Logic Apps than you should be aware of additional costs.

Working With Logic Apps and Functions

A Logic App can call a Function, to perform, for instance, a conversion of Euro to Dollars or vice versa. Assume you’re building a Logic App that receives an order request via a public facing website selling items in local currency. Once the Logic App consumes the order request, it will need to create a consistent message for a back-end system including the currency set to USD. Currently, in Logic Apps, there are no expressions available to perform this type of conversion. Hence, you need to call a function, which performs the conversion for you.

The Logic App and Function work together to enrich a message with another currency as shown below:

The Function gets the latest exchange rates and converts the EURO amount to USD (internal currency). The Logic App picks up the message from the queue and passes on successful enrichment the message to another queue. On failure, the message ends up in the dead letter queue. When to Use Logic Apps

Logic Apps are “event-driven” meaning they run based on a trigger. That is an HTTP request, message on a queue, a blob created in a container, or schedule.

Typical scenarios for Logic Apps are:

When to Use Functions

Azure Functions like Logic Apps are “event-driven” meaning they run based on associated and configured events, or “triggers.” For example, an Azure Function could be triggered by a simple timer, such as running a process once every 24-hours, by an event in a document management system, or when a new document is uploaded to a SharePoint library. Azure Functions can also respond to Azure-specific events, such as an image added to a Storage Blob or a notification arriving in a Message Queue.

Typical scenarios for Azure Functions are:

Published at DZone with permission of Steef-Jan Wiggers. See the original article here.