Q4 2019 earnings are in for the "big three" cloud providers and you know what that means – it’s time for an AWS vs. Azure vs. Google Cloud market share comparison. Let’s take a look at all three providers side-by-side to see where they stand.

To get a sense of the cloud market share breakdown, let’s take a look at what each cloud provider’s reports shared.

Across the business, Amazon’s quarterly sales increased to $87.4 billion, beating predictions of $86.02 billion. AWS has been a huge contributor to this growth. AWS revenue made up 11% of total Amazon sales for the quarter. AWS only continues to grow, and bolster the retail giant time after time.

One thing to keep in mind: you’ll see a couple of headlines pointing out that revenue growth is down, quoting that 34% number and comparing it to previous quarters’ growth rates, which peaked at 81% in 2015. However, that metric is of questionable value as AWS continues to increase revenue at this enormous scale, dominating the market (as we’ll see below).

In media commentary, AWS’s numbers seem to speak for themselves:

While Amazon specifies AWS revenue, Microsoft only reports on Azure’s growth rate. That number is 62% revenue growth over the previous quarter. This time last year, growth was reported at 76%. As mentioned above, comparing growth rates to growth rates is interesting, but not necessarily as useful a metric as actual revenue numbers – which we don’t have for Azure alone.

Here are the revenue numbers Microsoft does report. Azure is under the “Intelligent Cloud” business, which grew 27% to $11.9 billion. The operating group also includes server products and cloud services (30% growth) and Enterprise Services (6% growth).

The lack of specificity around Azure frustrates many pundits as it simply can’t be compared directly to AWS, and inevitably raises eyebrows about how Azure is really doing. Of course, it also assumes that IaaS is the only piece of “cloud” that’s important, but then, that’s how AWS has grown to dominate the market.

A victory for the cloud provider was the October winner of the $10 billion JEDI cloud computing contract (although AWS is actively protesting the contract with claims of political interference).

Here are a few headlines on Microsoft’s reporting that caught our attention:

This quarter, Google broke out revenue reporting for its cloud business for the first time. For the fourth quarter, Google Cloud generated $2.6 billion in revenue, a growth of 53% from the previous year. For 2019 as a whole, Google Cloud brought in $8.9 billion in revenue, which is less than AWS generated in the fourth quarter alone.

Google CEO Sundar Pichai stated on the earnings report conference call, “The growth rate of GCP was meaningfully higher than that of Cloud overall, and GCP’s growth rate accelerated from 2018 to 2019.”

CFO Ruth Porat also highlighted Google Cloud Anthos, as Google leans into enabling the multi-cloud reality for its customers, something AWS and Azure have avoided.

When we originally published this blog in 2018, we included a market share breakdown from analyst Canalys, which reported AWS in the lead owning about a third of the market, Microsoft in second with about 15 percent, and Google sitting around 5 percent.

In 2019, they reported an overall growth in the cloud infrastructure market of 42%. By provider, AWS had the biggest sales gain with a $2.3 billion YOY increase, but Canalys reported Azure and Google Cloud with bigger percentage increases. 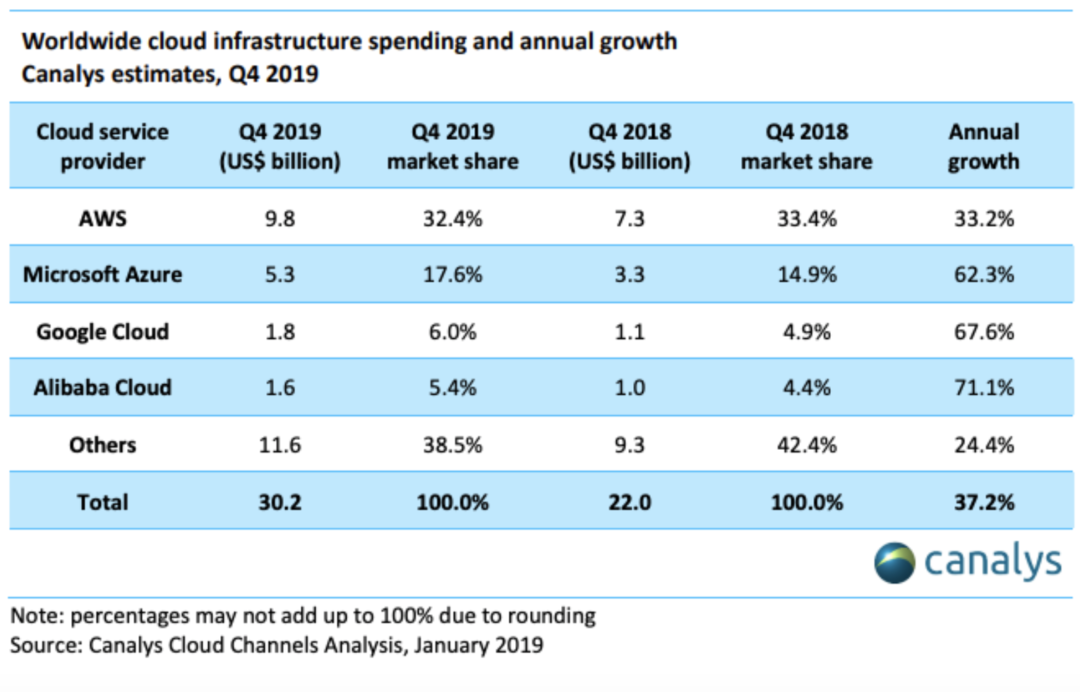 Ultimately, it seems clear that in the case of AWS vs. Azure vs. Google Cloud market share – AWS still has the lead.

Bezos has said, “AWS had the unusual advantage of a seven-year head start before facing like-minded competition. As a result, the AWS services are by far the most evolved and most functionality-rich.”

Our anecdotal experience talking to cloud customers often finds that to be true, and it says something that Microsoft isn’t breaking down their cloud numbers just yet, while Google leans into multi-cloud.

AWS remains far in the lead for now. With that said, it will be interesting to see how the actual numbers play out, especially as Alibaba catches up.

Published at DZone with permission of Jay Chapel . See the original article here.