Software development has been experiencing disruptive innovation over the last few years, and with the rising expectations of customers looking to get a superior experience, they are always searching for ways to release their products with faster time to market.

According to a Forrester study conducted in 2012, 17% of entrepreneurs need strategic IT services or software products, delivered in less than 3 months from basics to production, and a few expect the same in 3-6 months.

In this post, we will try to explain the real reasons behind this shift; both from the business and from a technology perspective, plus we will also cover the tools and processes that leading-edge companies are using to stay ahead of the competition.

It has become inevitable for all industries to deliver superior customer experience, and deliver it fast, in order to stay competitive. As well, continuous innovation is required to meet customers' expectations and the market needs. 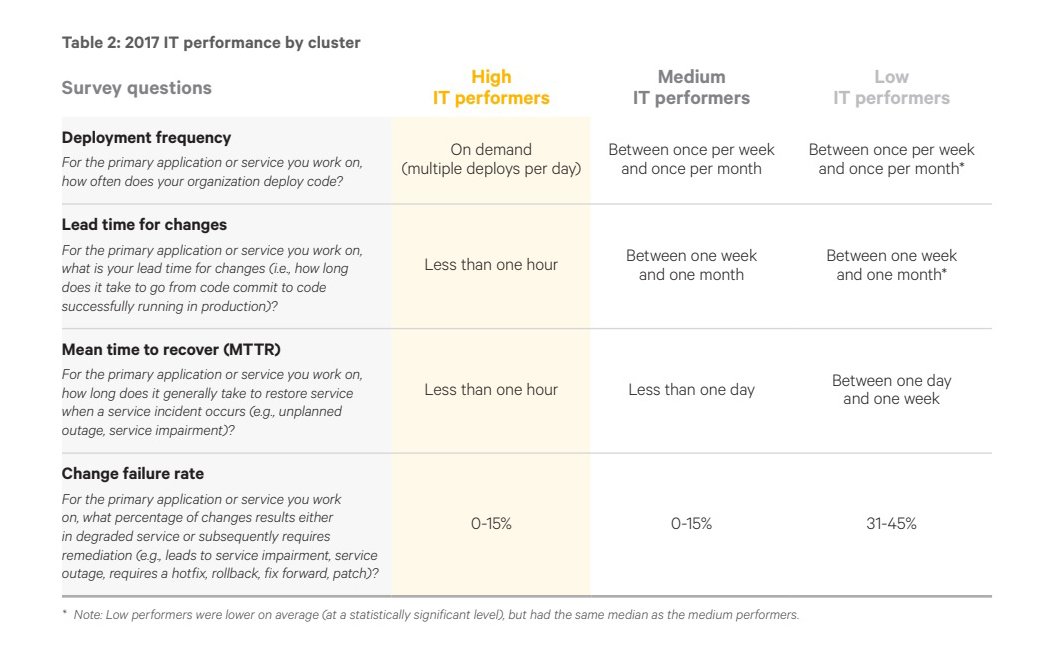 In 2017, low performers deployed their code once a week or month, as compared to once a month or every six months, in the year 2016. This proved to be a significant improvement, which was achieved by delivering the value faster, preventing failures, and releasing higher quality codes.

High performers have achieved benefits over the past year in terms of recovery of production and infrastructure outages, avoiding failures. This results in higher quality code, faster time to market, thus offering a better customer experience.

The technology has followed business and has come up with several new ways to deploy codes faster, securely, and with better quality. These efforts completely focus on methodologies such as DevOps, Agile, and test-driven development.

So, what is the main goal of these methodologies?

It is to allow developers to get their code released quickly and accurately in small, safe, and incremental steps. From a technical perspective, practices such as version control, continuous integration, trunk-based development, as well as automation, all helped in adding a focus on the structure of architecture and teams, and how they affect an organization's ability to develop and deliver software.

Some Interesting Facts and Figures

Higher frequency of releases, powers better automation. This leads to fewer errors and builds trust in the product. For example, Puppet Labs reported in its 2017 State of DevOps, that high-performing IT companies deploy codes at a 30 times higher frequency level than with 200 times shorter lead times.

The report also shows the consistent performance of high-performing IT companies, in terms of faster throughput and better stability. While low performing IT companies improved deployment frequency and lead-time for changes in comparison with the previous year, yet slower recovery times and higher failure rates were also noted. The reason being, not adhering to quality standards while building and during deployment.

Several factors can cause a failure to release new products. Companies are so focused on designing and developing, that they keep delaying the product release until the deadline arrives. According to industry reports, 75% of consumer packaged goods and retailers fail to launch products, thus earning less than what is expected in their first years. This is due to the inflexibility of consumers' shopping habits.

Listed below are companies who focus on the end-to-end journey of their product release:

Subsequent to moving to its own cloud, within a year, Amazon developers released codes every 11.7 seconds on average, thus lessening both the number and duration of outages at the same time, and resulting in increased revenue.

Facebook migrated its entire infrastructure and back-end IT to the Chef configuration management platform. Quick development lifecycle of Facebook continues to redesign consumers' expectations of the software by releasing the product bi-weekly.

Adobe uses CloudMunch's end-to-end DevOps platform to automate and manage its deployments. As it integrates with a variety of software, developers can expect faster delivery and better product management.

Etsy releases to its production servers 50 times a day, exhibiting fewer disturbances than when the company used the waterfall approach.

Netflix developers continued with its automation and open-source by releasing the code multiple times a day.

Today, customers are much more aware of the products. They choose digital products that are easy to use, safe, and accessible 24/7. These choices include a system that adjusts with their development needs. To be aware of the customers' needs, most systems require a team of developers.

To get the most out of these teams, many businesses are turning to DevOps and Agile methodologies, but with the former scaling more than the latter. Before we delve into it, let's understand the DevOps methodology, our prime reason for writing this post.

Today, businesses depend on software and IT to grow their brands and create a social benefit. This is because most companies choose DevOps in order to deliver the software faster, with minimal errors.

DevOps is designed completely with the IT mentality that empowers integration, collaboration, and automation, among the developers. IT operations are carried out to enhance the speed and quality of the product released.

DevOps teams focus on regulating the development environment and automating procedures, to improve the consistency in delivery with efficiency, maintainability, and security. The DevOps goals offer developers the opportunity to have more control and a better understanding of the production infrastructure. DevOps encourages the team to build, validate, deliver, and support the applications.

By delivering on lean and agile principles, engineering teams can deliver better system, and better business outcomes, which are important for successful DevOps; and for that, it is important to ensure good coordination between the development and operations team, to systematize the processes. IT performance is measured in two main dimensions:

With the growth of technology, DevOps has come a long way. The pillars of successful DevOps include - Continuous Integration (CI) and Continuous Delivery (CD), which help IT companies in building products of the utmost quality.

To boost the CI and CD improvement models and reap the benefits, companies should build an active pipeline to build automation, integration, and testing processes. This needs architecting CI and CD, which when combined, can be operated successfully through DevOps.

Continuous integration automates the building and testing of source code, every time a developer checks in their code. This means that each time a developer makes a change, a time-automated system enables them to identify problems early.

Listed below are the benefits of using CI:

DevOps & Agile: Which Is Better?

In Agile, software is developed in smaller iterations to adapt to customers' changing needs; while, in DevOps the software can be released multiple times through CI and CD, thus meeting customers' needs. In addition, with both the development and IT teams collaborating in DevOps, this prevents both CI and CD from becoming bottlenecked. Hence, there is an improvement in transparency, and the repetitive tasks can be automated effectively.

With Agile, on the other hand, development and IT teams exist as separate entities. Rather than working in close coordination, they function more in silos, owing to which budget goals and targets are not met most often, there is a lack of compatibility in the software components, and the new features break the old functions.

While Agile defines the values and principles required in developing software, it may only work on a developer's system or in a test environment, which is quite a limitation; but, with DevOps, the software is moved into the production infrastructure faster, and securely.

DevOps and Continuous Delivery - The Future of Software Development

Organizations can excel in two basic components of the development process - DevOps and Continuous Delivery - to retain and release software products for progress.

DevOps engineers wear several hats in supporting software and QA engineers, as per development needs. They offer help for specific projects that need a test server to be set up and designed. They are responsible for building servers that help in continuous integration, an automated build practice that merges the code mechanically multiple times a day. They help in creating custom scripts that perform a specific developmental task.

By executing DevOps effectively for your company, you can stand one-step closer to continuous delivery. It is a methodology that can be automatically rolled into production once the feature or feature set is accomplished. As per an Amazon presentation from the Velocity conference in 2011, Amazon always rolls out a feature to production for 11 seconds in the month of May, exhibiting continuous delivery at its finest.

To adopt the best practices of DevOps, here is a list of some influential people: Martin Fowler, Laurent Miltgen, John Arundel, and Eric Vanderburg, among others, who you can follow on twitter, and help make a difference to your business.

When you want to drive your business by releasing your product multiple times a day with the above methods, the end results are the following:

Product companies release software multiple times a day to increase their frequency level. This automatically boosts automation and results in more time for innovation, and a faster feedback cycle. Many companies opt for DevOps to integrate their functions with their IT roles, to build, test, release, and deploy the product quickly and more efficiently; and, if the deployment frequency of the company is multiple times per day or week, this method will expedite the product release. This further leads to shaping the landscape of businesses in the future.