In any case, the biggest bottleneck in implementing a successful DevOps framework is testing.

Smaller budgets and the desire for faster delivery have fueled the need for better approaches to development and testing. With the right testing principles, DevOps can help shorten the software development lifecycle (SDLC), but not without costly mistakes.

Many organizations are adapting their traditional sequential approach to software development to be better equipped to test earlier and at all stages.

What Is the Shift-Left Strategy?

It is part of an organizational pattern known as DevSecOps (a collaboration between development, security, and operations) that ensures application security at the earliest stages of the development lifecycle.

The term “shift left” refers to moving a process left on the traditional linear depiction of the software development lifecycle (SDLC). In DevOps, security and testing are two of the most commonly discussed topics for shifting left.

Testing applications was traditionally done at the end of development before they were sent to security teams. Applications that did not meet quality standards, did not function properly, or otherwise did not meet requirements, would be sent back into development for additional changes. It resulted in significant bottlenecks during the SDLC and was incompatible with DevOps methodologies, which emphasize development velocity.

As a result of shift left testing, defects can be identified and fixed much earlier in the software development process. This streamlines the development cycle, dramatically improves quality, and enables faster progression for security analysis and deployment to later stages.

Security testing has become a standard practice in recent years following application testing in the development cycle. At this point, various types of analysis and security testing would be conducted by security teams.

Security testing results will determine whether the application can be deployed into production or if it must be rejected and returned to developers for remediation. Due to this, long delays in development occurred, or the risk of releasing software without necessary security measures increased.

It is no secret that IT has shifted left over the last two decades. It is possible to operate development infrastructure on a self-service basis today because it is fully automated:

As a result of this shift, development productivity and velocity have increased tremendously, raising serious security concerns. The fast-paced environment leaves hardly any time for post-development security reviews or analysis of cloud infrastructure configurations. As a result, it is often too late to fix problems that are discovered before the next development sprint.

What Is the Shift-Left Testing Principle?

When developers test early in the development cycle, they can catch problems early and address them before they reach the production environment. By discovering issues earlier, developers don’t waste time applying workarounds to flawed implementations, and operations teams don’t have to maintain faulty applications. To improve the quality of an application, developers can identify the root cause of issues and modify the architecture or underlying components.

The shift left approach to testing pushes testing to the left, or the earlier stages of the pipeline. By doing this, teams can find and fix bugs as soon as possible during the development process. 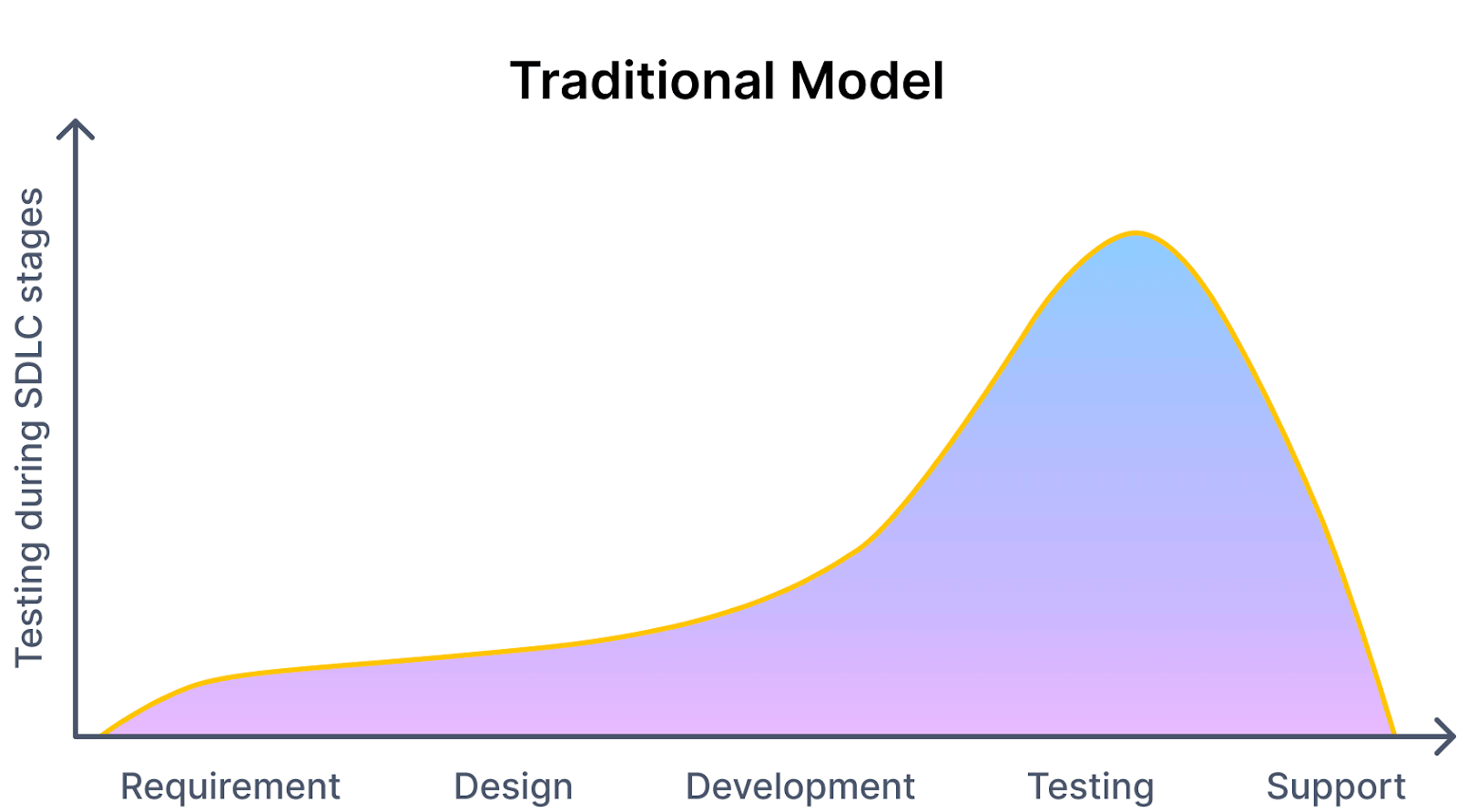 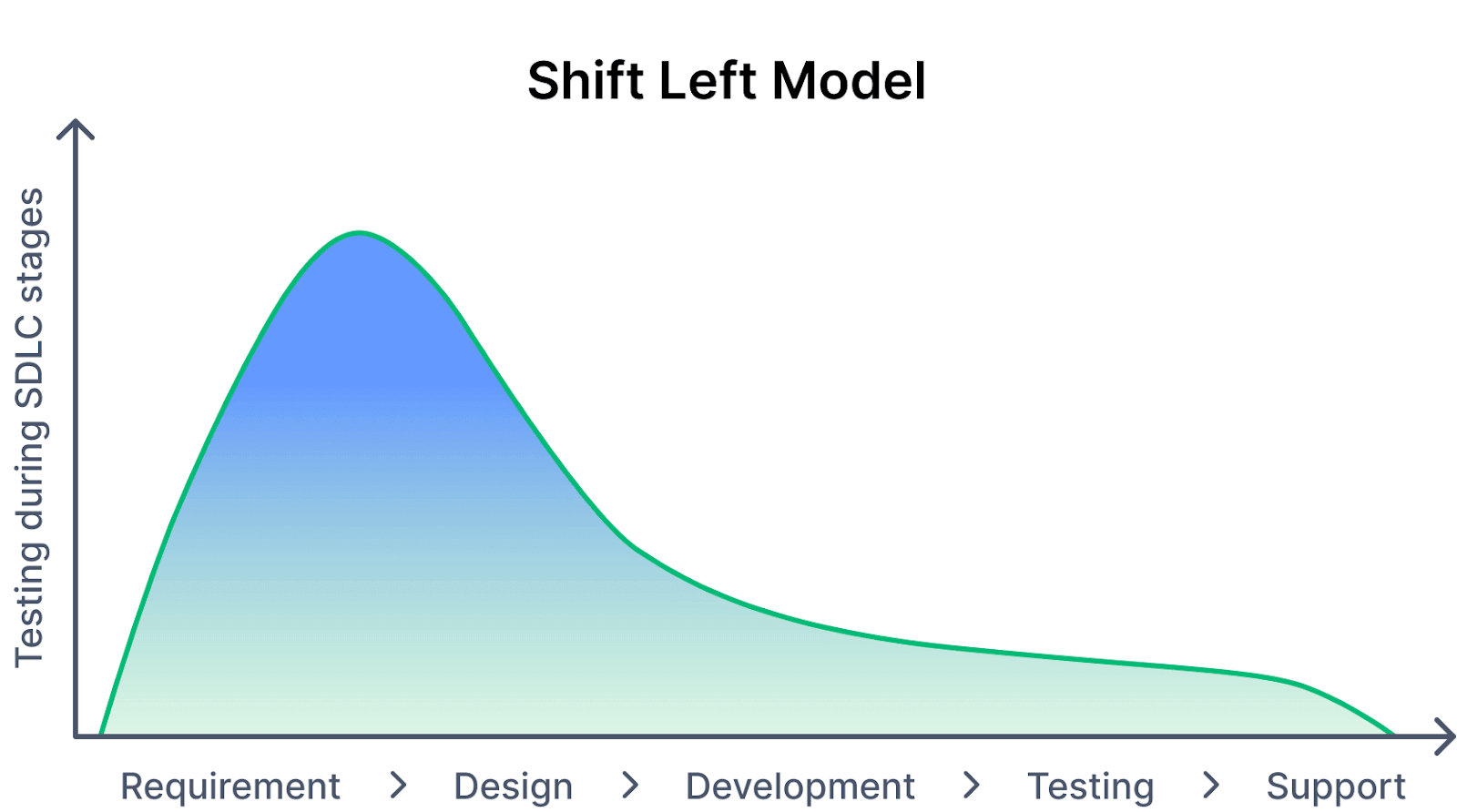 A major benefit of shifting testing is that testers are involved in the whole cycle, including the planning phase. Testing becomes part of the developer’s day-to-day activities as they become competent in automated testing technologies. Software is designed from the ground up with quality in mind when testing is part of the organization’s DNA.

A key benefit of “shift-left” testing is that it reduces overall development time. However, two key DevOps practices must be implemented to shift left: continuous testing and continuous deployment.

It’s not rocket science that the sooner you start, the sooner you finish. Therefore, identifying critical bugs early in the Software Development Cycle allows you to fix them sooner and more efficiently. The result is a significant decrease in the amount of time between releases and a faster delivery time.

Starting with the test execution right at the start of the development process, all software features, functionalities, and performance can be quickly evaluated. Test coverage percentages increase naturally when shift left testing is performed. The overall quality of the software is significantly enhanced by increased test coverage.

Ultimately, shifting left is worth the effort and time it takes to implement. This allows the QA team to go deeper into the product and implement innovative testing solutions. Furthermore, it allows the testing team to become more comfortable with the tools and techniques involved. In addition, shift left testing simplifies several aspects of software development.

Debugging is one of the most difficult aspects of software development. Usually, the cost of fixing a bug increases significantly as the software progresses in SDLC. Therefore, the earlier you find your bugs, the easier they are to fix.

Let us take the example of a payment app that discovers a security vulnerability only after the release of its latest app version. Sure, it would have cost some more if the team had found the vulnerability earlier in development. But now, the company will have to spend significantly more time, effort, and money to fix the problem. In addition, the complexity of implementing changes in a production environment makes it difficult to do anything after the fact, not to mention the associated total cost of late maintenance.
Gartner estimates the cost of network outages at $5,600 per minute – a total of over $300,000 per hour.

Once you mix Shift Left with leading DevOps practices – Continuous Testing and Continuous Development – you lay the foundation for Shift Left to win. Moreover, Shift Left is essential in a DevOps environment because.

Published at DZone with permission of Navya Manoj. See the original article here.