Google introduced cross-platform app development by introducing Flutter in 2018, and its been no looking back for Flutter since then as it is strongly taking over React-native.

Flutter is Google’s UI toolkit for building, natively compiled applications for mobile, web, and desktop from a single codebase.

Flutter is an open-source app development framework that provides faster development across all operating systems. It is staying true to its tagline ‘Build beautiful native apps in record time‘ by providing an interactive user interface that allows the developers to design applications according to the requirement of the user.

More than a framework, it is a complete SDK (software development kit) solution that provides everything needed for cross-platform mobile application development.

Flutter uses a single code base for creating Android and iOS apps, making it an ideal choice for startups and businesses that wants to invest in mobile apps. It has a reactive development architecture where UI elements are automatically updated at the time of variables in codes that are updated.

Some of the key features includes the following.

From startups to Fortune 500 companies, everyone is using Flutter app development for creating beautiful applications for their businesses. Some of them include:

Why Flutter Is Perfect for Start-Up Apps?

From startups to enterprise app development to minimum viable product development, every developer world over is embracing Flutter with open arms to develop cost-effective, robust and highly scalable  mobile applications for their business ventures.

Mobile application development is expensive, so startup companies with budget constraints can easily expand their access to all popular platforms by using Flutter apps. Flutter SDKs provide unique ways to cut costs in comparison to native android and iOS apps. Mainly, it speeds up the whole development process and reduces the  production cost with an added advantage of building beautiful apps UI with smooth animations.

Due to its advanced technology and design features, Flutter provides the freedom to work in any direction(including network, cameras, storage, geolocation, etc.) making it every developer’s darling technology for building high-performing apps. Also, app developers are getting all the best features under one roof saving a lot of precious time.

Cross-platform development is startups best friend because developers can create a powerful native experience with a single codebase(for both iOS and Android), hence reducing development costs incurred to greater extents. However, in cross-platform apps, UX and UI

Flutter offers a faster and dynamic app development process where the developer can easily make changes in the code and see them directly through its “Hot Reload”  feature.

Simply put, if there is an error during the development process the developers can immediately fix it without any recompilation and redeployment of the code and can continue from where they left. This can make the developers see their changes in real-time and quickly add on the new features, fix bugs and experiment.

Also, Hot Reload provides better collaboration between designers and developers to work in tandem on UI, improve  the design, and immediately check effects.

Hot reload increases the overall productivity of the project and allows experiments within a few seconds without long delays. 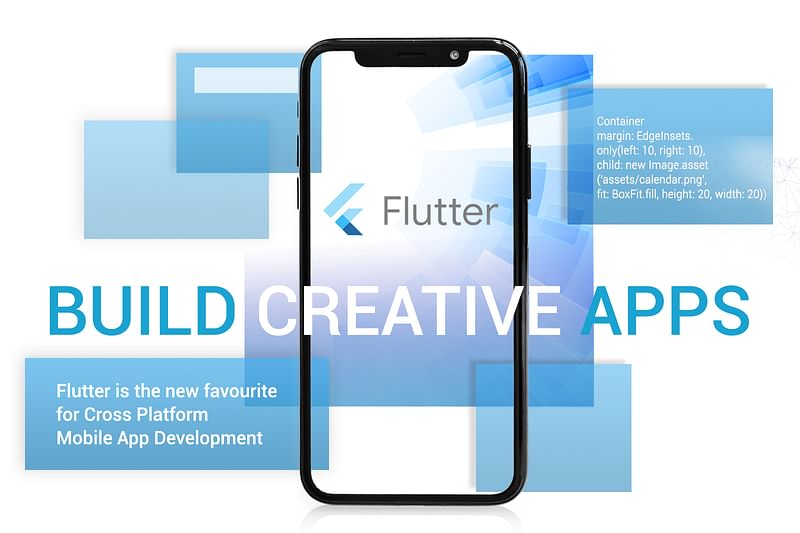 Flutter can help startups build an MVP that works on multiple platforms to showcase its full functionality, thus saving valuable time and cost. Through MVPs, startups can assess the real picture before its launch about the response their product is receiving in the market.

As it is startups are running short on budgets, so MVPs can provide a cost-effective development process by evaluating all possible shortcomings based on the feedback received and executing the required changes in time.

Faster app development is a big challenge for startups. Flutter being an open-source, cross-platform solution with a hot reload feature, can quickly build mobile apps and reach the market in a shorter duration of time.

With Flutter, developers can give an amazing eye-catching UI experience to its users by building a beautiful sleek app.

Flutter comes with customized widgets for both iOS and Android which creates a smoother user experience by providing a native feel to end-users without costing much. Its widget catalog is humongous amongst all cross-platform tools and widgets are used not only for views but also for the entire screen and even the app itself.

Additionally, Flutter has got the material design for Android and iOS widgets or Cupertino for iOS apps to create responsive apps.

Flutter seems to be the perfect answer to all the startup needs with budget constraints looking to expand their reach. This framework gives much-needed boost to your startup by providing speedy and reliable cross-platform app solutions in the following ways-

What to Look for in Flutter?

Flutter 1.7 was launched in 2019! Flutter is slowly gaining a stronger ground in app development and becoming the developer’s 1st choice in building stable apps  because of its imperative features and benefits. Flutter is strongly backed by huge community support and global leaders, who are constantly evolving the framework for the best and polishing it even more to take it ahead in 2020 and beyond.

The future of flutter seems brighter for SDK in the coming years as it doesn’t have constraints like native as well as also supports the integration of native codebase.

Flutter is surely a delight technology for developers to work upon due to its many advantages for business than risks, all set to reach the pinnacle of success in coming few years. If you’re planning to build a startup app for both iOS and android platforms, do consider Flutter app development after weighing its pros and cons as per your business needs and requirements.