Xmake is a lightweight cross-platform build tool based on Lua. A previous article provides a detailed introduction to Xmake and the build system.

If you already have a general understanding of Xmake, you will know that it is not only a build tool, but also has built-in support for C/C++ package management. We can also understand Xmake as:

After several years of continuous iteration, Xmake's support for C/C++ package management has been continuously improved, and many useful package management features have been added. Therefore, in this article, we will make some summaries of it, hoping to help everyone.

The ecology of C++ is very complex, and there are certain reasons for this. In any case, the official documentation does not provide native package management support. For our developers, it is somewhat inconvenient to use third-party C++ dependent libraries.

In fact, there are already many powerful C/C++ package managers. The most well-known and most used are Vcpkg, Conan, and Conda. Although they are very powerful, they have a common problem: the build system doesn't have built-in support for them.

Since CMake does not provide built-in support for them, it is very cumbersome to use them in CMake to integrate dependencies, and the way of integration and use is inconsistent.

To use Conan to integrate C/C++ packages in CMake, we need to provide additional CMake Wrapper scripts and inject them into our own projects in a similar way as plug-ins.

In order to integrate a package, a lot of additional scripts need to be configured.

To use the Vcpkg integration package in CMake, we also need to inject an additional toolchain script file.

In addition, there is another problem, which is that we need to call the vcpkg install [packages] command to install this package. Each of these links requires an additional exploration process for users, and it is impossible to achieve a real, one-click compilation.

When we download a CMake project that integrates the vcpkg package, and if we want to compile it, these additional things need to be done in addition to the project configuration:

CMake can also provide FetchContent to manage dependencies, but it seems to need to download source code, and all dependencies must be maintained and built based on CMake.

In addition, we need to configure various package information such as url, version, etc. for each dependency.

Meson is very powerful and also provides its own package management support. However, it is also cumbersome to use other package managers in Meson, such as vcpkg/conan, etc., and does not provide built-in support.

Xmake not only provides a built-in xmake-repo package management repository, which can be directly integrated and used, but also supports the same integration method to quickly integrate third-party dependencies such as vcpkg/conan.

We need only a few lines of configuration to integrate a built-in dependency package:

To integrate a Vcpkg package, we only need to add the corresponding package manager namespace, like this:

To integrate a Conan package, or a third-party package such as Conda, Homebrew, Pacman, Apt, clib, etc., we only need to change it to conan::zlib, and users can switch package sources at will.

In addition, Xmake will automatically call the vcpkg/conan install installation command for you to install the dependent packages, and then integrate them, without requiring the user to do anything else. Just execute xmake one-click compilation. 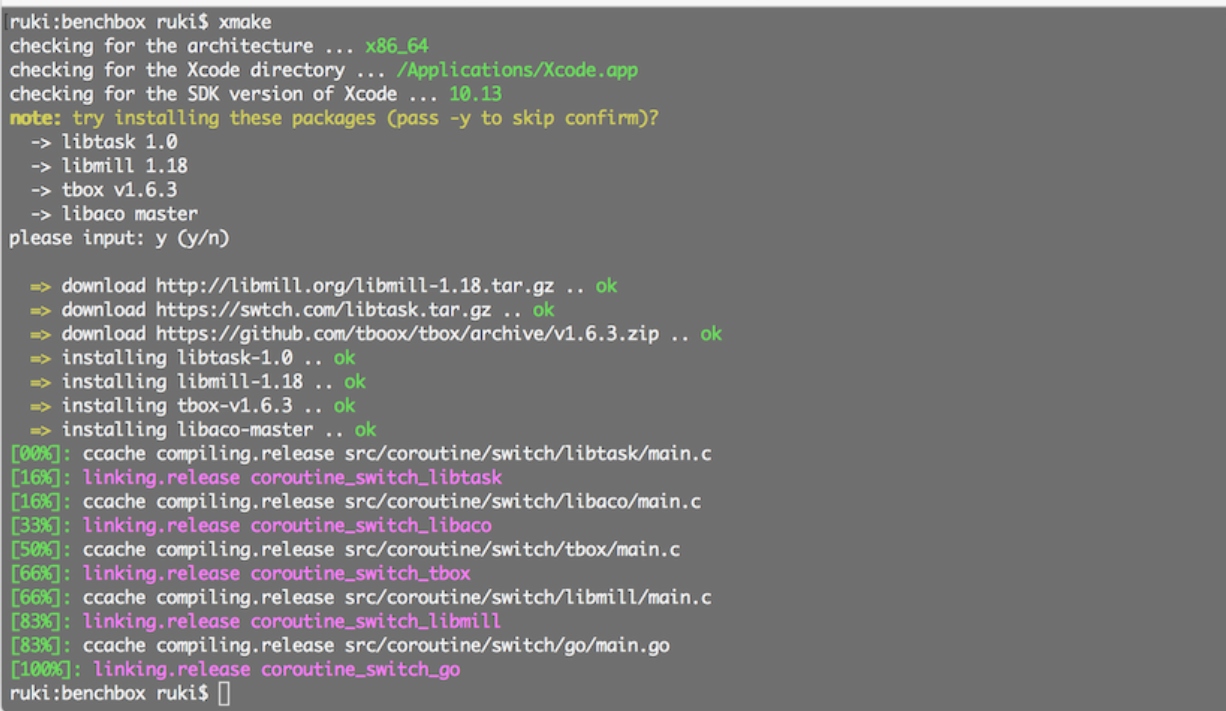 Do you think there are too few packages in the built-in package repository of Xmake? It doesn't matter at all. In theory, you can use 90% of the common dependencies in the entire C/C++ ecosystem through Xmake, because Xmake can quickly integrate packages from various other package managers to use.

The package sources currently supported by Xmake are as follows:

Basically, these repositories have basically covered all the packages that C/C++ users need on a daily basis.

We counted the number of packages in the vcpkg/conan/xmake-repo repositories:

It can be seen that the current number of packages in Xmake's built-in repository is approaching vcpkg/conan. There are quite a few, and we are constantly including new packages. However, that doesn't matter at all, because we can use packages from any package repository.

Even if C/C++ packages are not enough, packages from other languages can also be used. For example, Xmake also supports pulling packages from Dlang/Rust package managers such as dub/cargo for use in C/C++ projects.

In addition to accessing third-party package management, we also recommend using the packages provided in the integrated xmake-repo built-in repository first, and Xmake will provide more feature support. Therefore, if the package you need has not been included, you can try to submit it to xmake-repo first.

Next, we systematically introduce some features of the integrated built-in package.

For example, some semantic versions are written as follows:

Of course, if we have no special requirements for the version of the current dependency package, we can write it directly like this:

This will use the latest known version of the package, or a package compiled from the source code of the master branch. If the current package has a Git repo address, we can also specify a specific branch version:

Xmake's semantic versioning support has been well supported for a few years, and Vcpkg has barely supported it through manifest mode in the last year. Even now, Vcpkg's support for version semantics is very limited. It can only support several version modes such as >=1.0, 1.0, and you want to select any version of the package, such as >=1.0 <1.5. Vcpkg still cannot support other complex Version-conditional packages.

If the specified dependency package is not supported by the current platform, or the compilation and installation fail, Xmake will compile and report an error, which is reasonable for some projects that must depend on certain packages to work. However, if some packages are optional dependencies, they can be compiled and used normally even if they are not available. They can be set as optional packages:

By default, Xmake will firstly detect whether the system library exists (if no version requirement is set). If the user does not want to use the system library and the library provided by the third-party package management, you can set:

It just finds and uses the system library, and does not download and install it remotely. This is similar to CMake's find_package, but the integration method is simpler and more consistent.

Use Debug Builds of Packages

If we want to debug the dependency package at the same time, we can set it to use the debug version of the package (of course, the premise is that this package supports debug compilation):

Enable Optional Features of the Package

We can also install packages with specific features, such as installing the ffmpeg package with zlib and libx265 enabled.

We can also pass additional compile options to the package:

Xrepo is a cross-platform C/C++ package manager based on Xmake. It is a command program independent of Xmake, which is used to assist users to manage dependency packages, similar to vcpkg/conan, but compared with them, it has some additional practical features. We will briefly introduce some below.

Just add your own repository URL with the following command:

View the Library Usage Information of the Package

You can also import the previously exported installation package on other machines to implement package migration.

In addition, you can now search for their packages from third-party package managers such as Vcpkg, Conan, Conda, and Apt. Simply add the corresponding package namespace as in this example:

We can customize some package configurations by adding the xmake.lua file in the current directory, and then enter a specific package shell environment.

Xmake does not intend to split the C/C++ ecosystem. It can be compatible with existing projects maintained by cmake/autoconf/meson. For example, some other code libraries maintained by CMake can be directly integrated locally and participate in mixed compilation. In other words, Xmake will not force users to re-port all projects to xmake.lua, and existing CMake projects can be quickly integrated into Xmake projects.

For example, we have the following project structure:

Among them, we use set_sourcedir() to set the code directory location of the foo package, and then import the package.tools.cmake auxiliary module to call CMake to build the code. Xmake will automatically obtain the generated libfoo.a and the corresponding header document.

For local source integration only, we don't need to set additional add_urls and add_versions.

Once the package is defined, we can use it through add_requires("foo") and add_packages("foo"), just like integrating a remote package.

Also, on_test is optional. If you want strictly to check whether the compilation and installation of the package is successful, you can do some tests in it.

For a complete example, see Library with CMakeLists.

Integrate the Meson Project in Xmake

Xmake supports the integration of more third-party source code libraries maintained by other build systems, such as Meson. You just need to import and use the package.tools.meson auxiliary building module to call meson to build them.

For example, let's pick a package built with meson from the xmake-repo repository as an example:

We can also use package.tools.autoconf to natively integrate third-party codebases with autoconf maintenance.

Both package.tools.autoconf and package.tools.cmake modules can support cross-compilation platforms and toolchains such as mingw/cross/iphoneos/android. Xmake will automatically pass the corresponding toolchain into it and users do not need to do any other thing.

We can also use package.tools.gn to natively integrate third-party codebases maintained by GN.

Check out the complete script example, Skia with GN.

Now CMake is the de facto standard, so the find_package provided by CMake can already find a large number of system libraries and modules. We can also fully reuse this part of the ecology of CMake to expand Xmake's integration of packages.

Change the package namespace to cmake::similar to integrating the vcpkg/conan package.

We specify system = true to tell Xmake to force CMake to find the package from the system. If it can't find it, it will not follow the installation logic, because CMake does not provide the installation function of package managers such as vcpkg/conan, but only provides package search. characteristic.

It is equivalent to pre-define some configurations in CMakeLists.txt before calling find_package to find packages internally to control the search strategy and status of find_package.

Specify the custom directory to mydir/cmake_modules/FindFoo.cmake.

In addition to integrating CMake projects in Xmake, we can also directly integrate the packages provided by Xmake/Xrepo in CMake by using xrepo-cmake to provide CMake Wrapper.

We, too, can customize the optional features of packages, as in Xmake.

In addition to installing packages from repositories officially maintained by Xmake, we can also use it directly in CMake to install packages from third-party repositories, just by adding the repository name as a namespace; for example, vcpkg::zliband conan::pcre2.

In this way, we unify the way we integrate and use vcpkg/conan packages in CMake, provide automatic package installation features, as well as support for other package repositories such as homebrew/conda.

Published at DZone with permission of runqing wang. See the original article here.