Neural networks are the core of all AI algorithms, and today, deep neural networks are used in tasks ranging from image recognition and object detection to natural language processing and generation. After dissecting the basic building blocks that form a neural network and the principles of how they work, this Refcard delves into neural architecture types and their respective uses, neural network chips, and model optimization techniques at a high level.

A massive interconnection of computing cells, also known as neurons, comprises a neural network, which is the heart and soul of all artificial intelligence (AI) algorithms. Almost 80 years ago, in 1943, neurophysiologist Warren McCullough and mathematician Walter Pitts from the University of Illinois at Chicago first proposed the neural network. After a series of evolutions, the deep neural networks (DNNs) — which are usually those with more than two hidden layers — are now used for image recognition, image classification, object detection, speech recognition, language translation, natural language processing (NLP), and natural language generation (NLG).

The present Refcard first introduces the concept of a neural network by drawing an analogy with the biological neural network and subsequently walks readers through the essential components of neural networks, which are considered the building blocks. Common neural architectures are discussed thereafter, defining the underlying arrangement of the neurons and the specific purposes they serve.

Then we'll discuss the different AI accelerators specifically designed for the efficient processing of DNN workloads, along with the neural network optimizers that work on the learning rate to reduce overall loss and improve accuracy. Finally, we will cover various applications of DNNs across industries and explore the power of leveraging high-performance computing (HPC) with AI.

What Are Neural Networks?

This section will first illuminate the constituent components of the neural network followed by the various network architectures that illustrate how neurons are arranged. The subsequent deliberations on neural network chips and optimizers will demonstrate a seamless implementation of the network for improved accuracy and speed.

It's critical to first appreciate the nuts and bolts of a neural network, which is composed of the three layers — input, hidden, and output — as well as the perceptron, activation functions, weights, and biases.

The single input layer accepts external independent variables that help in predicting the desired outcome. All the independent variables of the model are a part of the input layer. The one-to-many interconnected hidden layers are configured based on the purpose that the neural network is going to serve, like object detection and classification through visual recognition and NLP. Hidden layers are a function of the weighted sum of the inputs/predictors. When the network contains multiple hidden layers, each hidden unit is a function of the weighted sum of the units of the previous hidden layer. The output layer, as a function of the hidden layers, contains the target (dependent) variables. For any image classification, the output layer segregates the input data into multiple nodes as per the desired objective of the model. 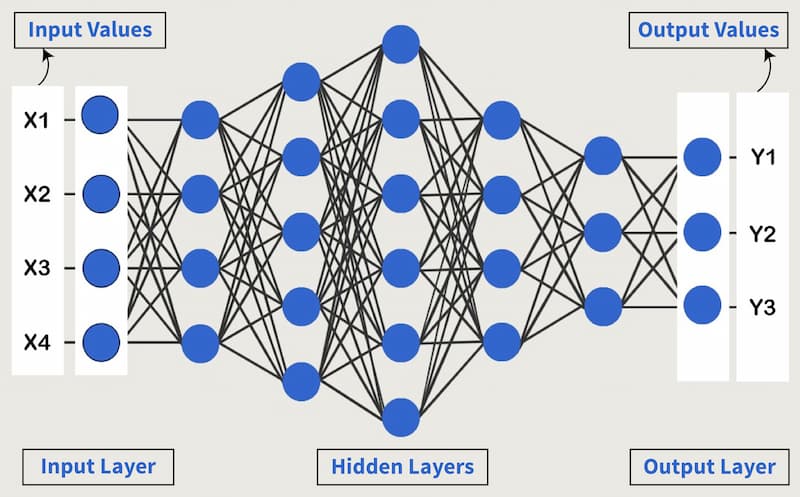 Frank Rosenblatt, an experimental psychologist from Cornell, was intrigued by the ability of neurons to learn and created a simple perceptron with multiple inputs, a single processor, and a singular output. Thus, the perceptron is a building block of a neural network that comprises a single layer. 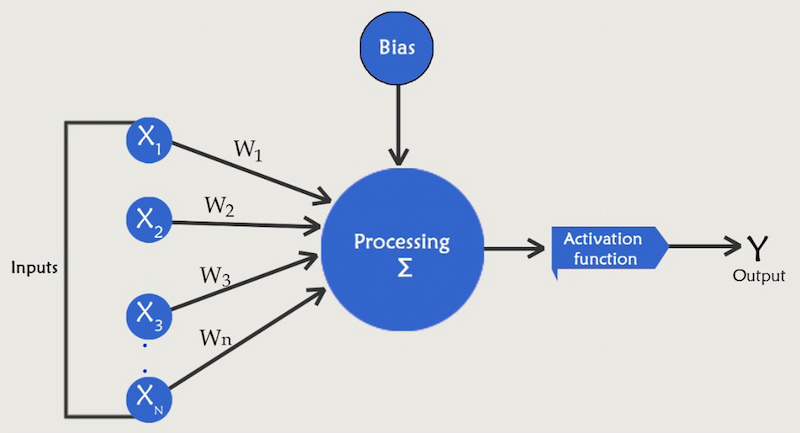 In case there is any confusion about which activation function to use that best suits your use case, it is advisable to use ReLU since it helps to overcome the vanishing gradient problem and allows the models to be better trained. 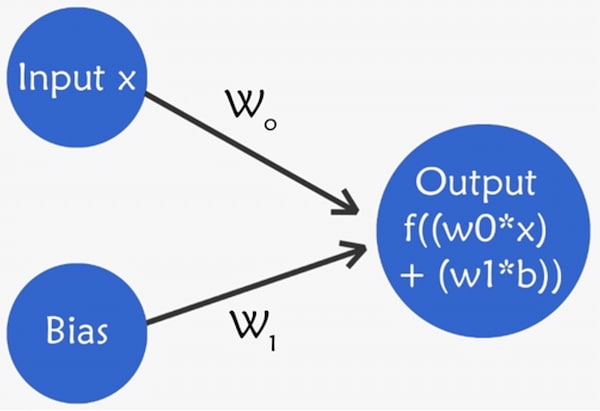 Biases are like constants in a linear function y = mx+c where m = weights and c = bias. Without a bias, the model will pass through the origin only, and such scenarios are far from the reality. Thus, the bias helps in transposing the line and makes the model more flexible.

The neural network architecture is composed of neurons, and the way these neurons are arranged creates the structure that defines how the algorithm is going to learn. The arrangements have the input and the output layers with hidden layers in between that increase the model's computational and processing power. The key architectures are discussed below.

The radial basis function (RBF) has a single non-linear hidden layer called a "feature vector," where the number of neurons in the hidden layer should be more than the number of neurons in the input layer to cast the data into a higher dimensional space. Thus, RBF increases the dimension of the feature vector to make the classification highly separable in high-dimensional space. The figure below illustrates how the inputs (x) are transformed to output (y) with through a single hidden layer (i.e., feature vector), which connects to x and y through the weights. 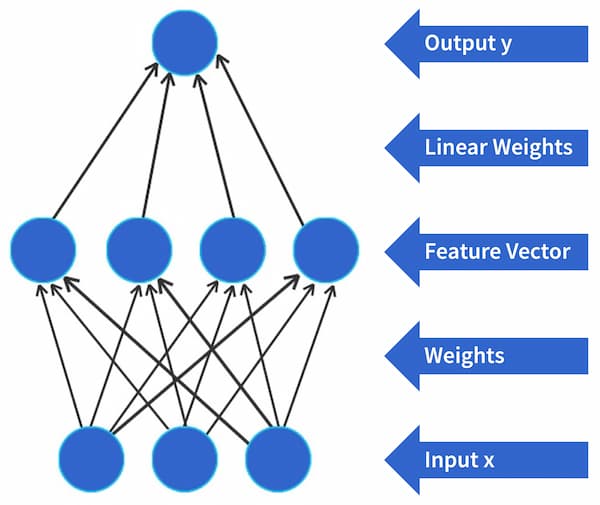 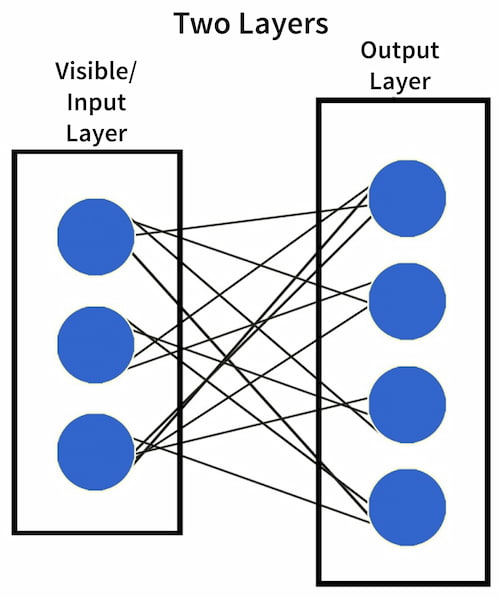 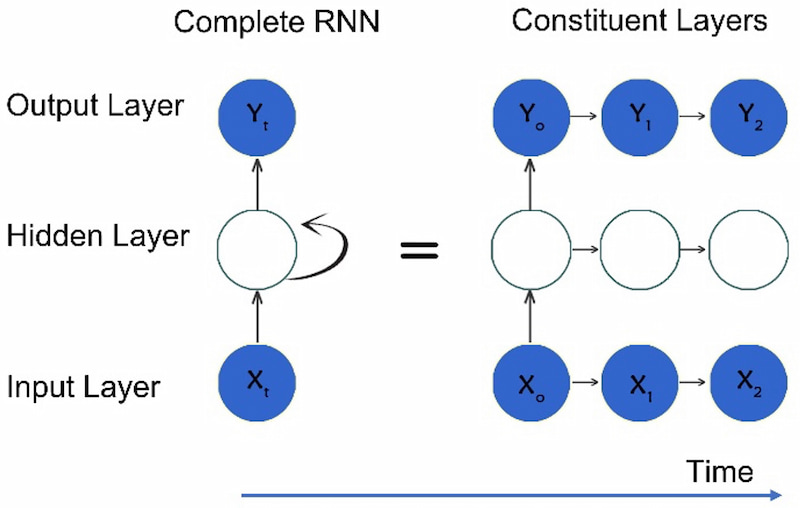 Long short-term memory (LSTM) — which is composed of forget, input, and output gates — has several applications including time series predictions and natural language understanding and generation. LSTM is primarily used to capture long-term dependencies. The forget gate decides whether to retain the information from the previous timestamp or "forget" it. A less complex variant with a smaller number of gates form the gated recurrent unit (GRU).

The GRU is a simplified variant of LSTM where forget and input gates are combined into a single update gate, and the cell state and hidden state are also combined. Thus, a GRU uses less memory and is therefore faster than LSTM.

Convolutional neural networks (CNNs) are widely popular for image classification. A CNN assigns weights and biases to objects in the image for classification purposes. An image comprising a matrix of pixel values is processed through the convolutional layer, pooling layer, and fully connected (FC) layer. The pooling layer reduces the spatial size of the convolved feature. The final output layer generates a confidence score to determine how likely it is that an image belongs to a defined class. CNNs are widely used in Facebook and other social media platforms to monitor content.

Generative adversarial networks (GANs) use two neural networks, a generator, and a discriminator. While the generator helps in generating image, voice, and video content, the discriminator classifies them as either from the domain or generated. The two models are trained for a zero-sum game until it's proven that the generator model is producing reasonable results.

Neural network chips provide the power of computing infrastructure through processing speed, storage, and networking that make the chips capable of quickly running neural network algorithms on vast amounts of data. Network chips break the tasks into multiple sub-tasks, which can run into multiple cores concurrently to increase the processing speed.

GPUs were originally developed for graphics processing and are now widely used for deep learning (DL). Their benefit is parallel processing through the following five architectures:

A GPU computes faster than a CPU as it devotes more transistors to data processing, which help to maximize the memory bandwidth for large datasets with medium-to-large models and larger effective batch sizes.

An FPGA has thousands of memory units that run parallel architectures at low power consumption. It consists of reprogrammable logic gates to create custom circuits. FPGAs are used for autonomous driving and automated spoken language recognition and search.

CPUs with MIMD architecture are brilliant in task optimization and are more suitable for applications with limited parallelism, such as sparse DNNs, RNNs that have dependency on the steps, and small models with small effective batch sizes.

A TPU is Google's custom-developed application-specific integrated circuit (ASIC) that is used to accelerate DL workloads. TPUs provide high throughput for large batch sizes and are suitable for models that train for weeks, dominated by matrix computations.

AI accelerators are required for DL inference for faster computation through parallel computational capabilities. They have high bandwidth memory that can allocate four to five times more bandwidth between processors than traditional chips. A couple of leading AI accelerators for DL inference are AWS Inferentia, a custom-designed ASIC, and Open Visual Inference and Neural Network Optimization (OpenVINO), an open-source toolkit for optimizing and deploying AI inference.

Deep learning model optimizations are used for various scenarios, including video analytics as well as computer vision. Since most of these computation-intensive analyses are done in real time, the following objectives are critical:

For example, OpenVINO provides seamless optimization of neural networks with the help of the following tools:

Industries, and across specific sectors, have wide applications of AI in the current era. Keeping that in view, in this Refcard, we delved into the roots of AI algorithms, as well as explored the fundamentals of neural networks, the architectural intricacies of DNNs, and hardware requirements for the best performance. The table below presents some of the major applications of deep neural networks across the industry:

With advances in the sophistication of AI algorithms, it's become increasingly important to look beyond AI chips to reduce time to model/time to insight and increase accuracy. Since high-performance computing is a shared resource, containerization solutions like Kubernetes pave the way to give users more control and to process data at scale. The National Center for Supercomputing Applications (NCSA) at Illinois is spearheading applications of the confluence between AI and HPC across industries ranging from genome mapping to autonomous transportation.

PyTorch is a Python package to use the power of GPUs and other accelerators built on a tape-based autograd system:

Keras is a high-level neural network application programming interface (API) written in Python for DNNs that can run on top of CNTK, TensorFlow, and Theano:

OpenVINO is an open-source toolkit for optimizing and deploying AI inference: