in part one , we captured sms messages using a broadcastreceiver. in , among a set of options, we chose to pass the needed sms information (sender, message and timestamp) as a serializable 'popmessage' object from the background to the foreground alert dialog that we constructed in : 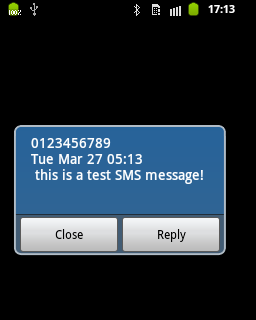 in this last section, we will complete this basic application by handling the user actions through button clicks. there are two actions the user may perform:

we used  intents  in the previous parts of this series, as  asynchronous messages  to pass data between components:

the above code uses an  explicit intent  , i.e an intent that indicates a particular class (  popsmsactivity  ) to pass data to. it is basically a direct call to another component (service, activity...). but intents can also be used to send messages to the android system so that the latter can determine what course of action to take.

implicit  intents  do not designate  a specific class  which should be called by the system, but  the  action  which we would like to be performed by the system. how does android know which component(s) to call in order to perform that action? because those applications/components that can handle the action have previously registered themselves in the system. but how did they do that? the same way we did with our custom sms receiver in our application's manifest in part one of this series:

by using an  intent-filter  , we indicated to the android system that our application was a candidate for handling the sms_received event.  intent filters  are how components declare their capabilities so that other components can use them. android will look at the action, data, and category of the intent as part of its  intent resolution  process.

a given component can declare any number of intent filters, corresponding to the number of actions it can potentially handle. if a component does not have intent-filters, it can only respond to  explicit  intents. when there are several components that have the same intent filters, android will present the user with a list to choose from.

what the  smsreply()  method below is doing, is asking android to bring up any mms-sms program it can find on the phone :

this is what it looks like on the phone, once the "reply" button is clicked and the sms program (second screen) is brought up automatically to send a response:

the gohome(), sweet home method called on closing the dialog, simply takes the user back to the phone home screen :

that's it. we now have our first working version of an sms popup application, and we can start building whatever new features we might think of on top of it.

here's  one example  of what can be done, by adding the list of phone contacts, sounds, and a settings screen.