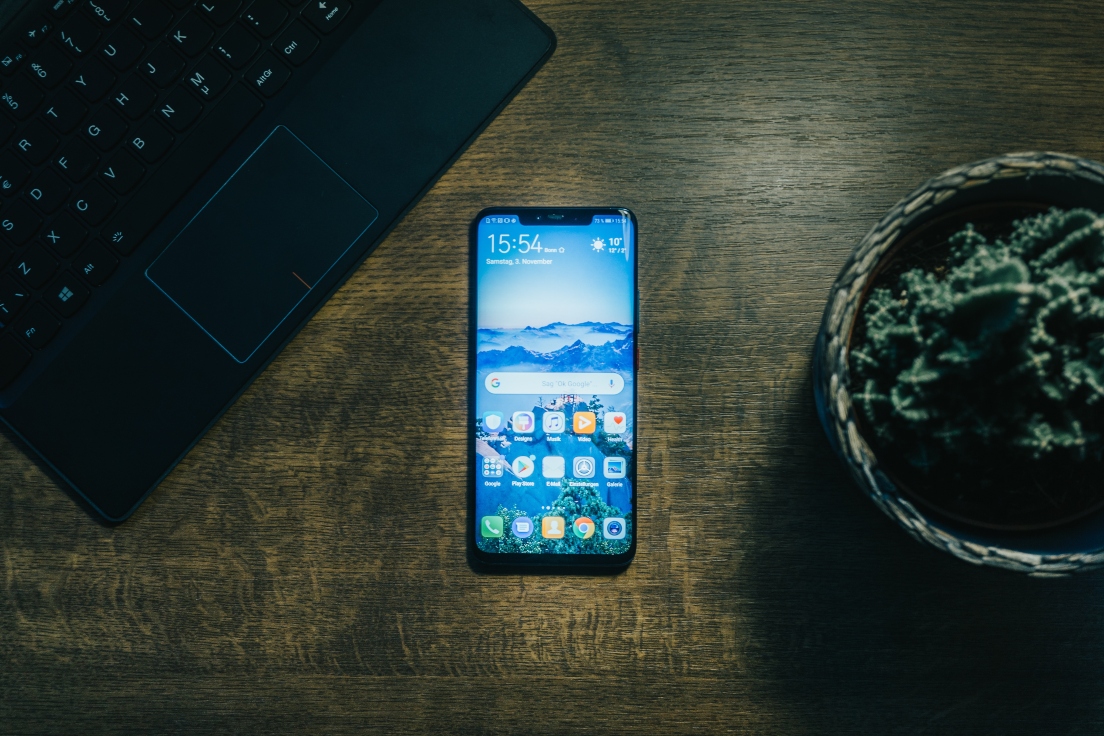 A common dilemma faced by many developers is whether to go with Android or IOS? Well, all I can say is, “it all depends on CHOICES!” To me, Android is the best bet. Why? Android today has managed to hold 88% of the global market, whereas competitors like Apple’s IOS and Windows are way behind.

In this tutorial, I will take you through an introduction to Android app development, so you can get started building your own.

You may also like: Code Gems for Android Developers.

Android is the most successful and powerful mobile operating system in the market today. Before jumping into the tutorial, let’s understand why Android is a good choice to develop applications with.

This is surely Google’s magic. Now, let’s see how Android has evolved.

Google has launched several different versions of Android. The name of these versions is in alphabetical order, such as Cupcake, Donut, Eclair, Froyo, Gingerbread, and so on. Now, the interesting fact to be noticed in these versions is the name of the operating system, which is named after desserts. Isn’t that great? Hence, the latest version i.e 7.0 is named after Nougat, which is said to be the sweetest release to date. 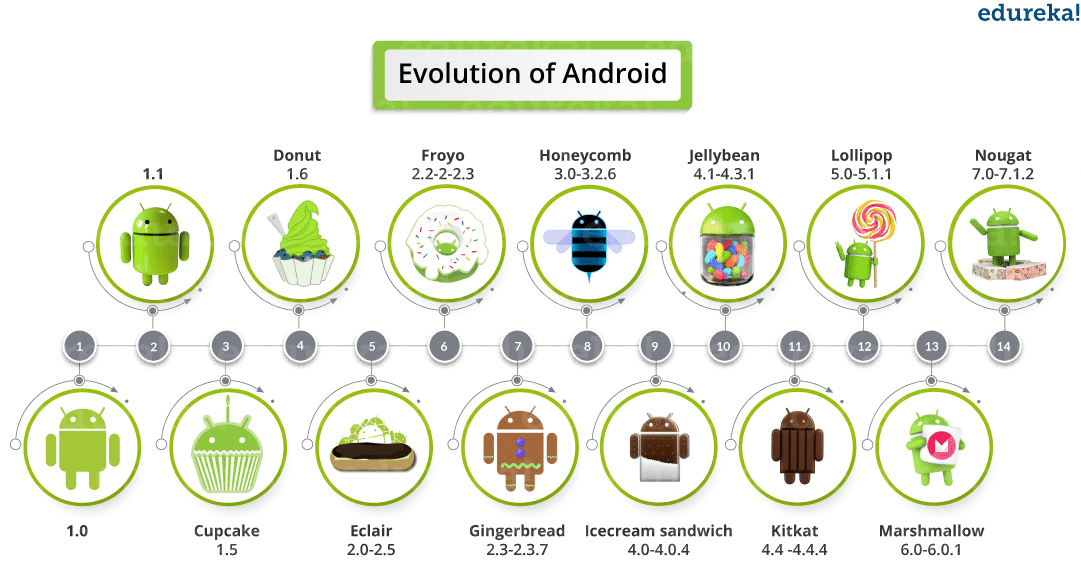 Android OS is a software stack of different layers, in which each layer is a group of some program components. It includes your operating system, middleware, and important applications. Each layer in the architecture provides different services to the layer just above it.

The f8ollowing are the different layers in the Android stack: 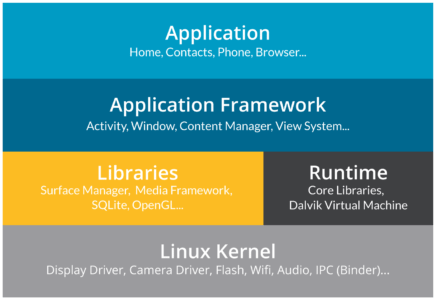 As we all know, Android has plenty of features. Some of the major features are listed below:

Apart from these, Android is used in various fields. If you open your play store, there are several categories where Android can be used. Some of them are mentioned below: 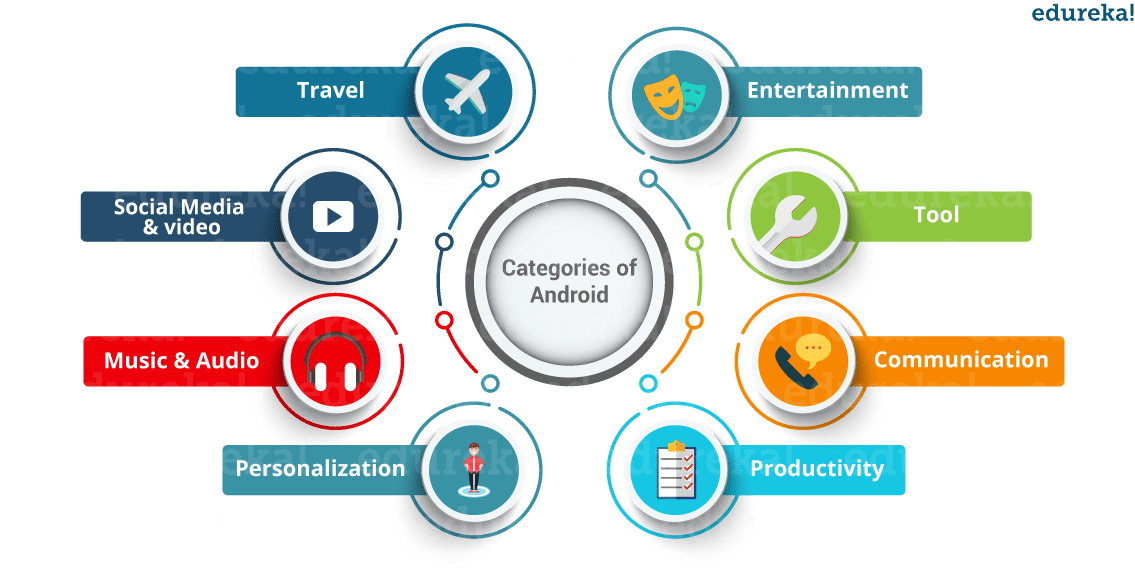 By now, you know some of the basics behind Android. Let's move forward in our Android tutorial blog and understand the core building blocks of Android!

There are five main components that are considered to be the core building blocks within an Android application:

Let’s understand them in detail.

An Activity is the screen representation of any application in Android. 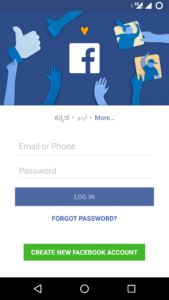 It serves as an entry point for the user’s interaction. Each activity has a layout file where you can place your UI. An application can have different activities. For example, the Facebook start page where you enter your email/phone and password to login acts as an activity.

Below are the two methods, which almost all subclasses of Activity will implement:

onCreate(Bundle): It is a method where your initialization is done. Under this, you will call  setContentView(int) with a layout resource that defines your UI. Also, you can retrieve the widgets in that UI by using findViewById(Int). These are required to interact programmatically.

onPause(): It is a method which deals with the user whenever it leaves the activity. So, any changes made by the user should be committed, which is done by the ContentProvider that holds data. An activity is implemented as a subclass of the  Activity class as follows:

Now, let’s move ahead and understand the activity life cycle.

As the user navigates between different screens or apps, it goes through different stages in their lifecycle. So, an activity lifecycle consists of seven different methods of the android.app.Activity class.

You must be aware that a program starts from a main() function in different programming languages. Similarly, Android initiates the program within an activity with a call to the onCreate() callback method. There is a sequence of callback methods that starts up an activity and then tears down that activity in different methods shown in the above Activity life cycle diagram: 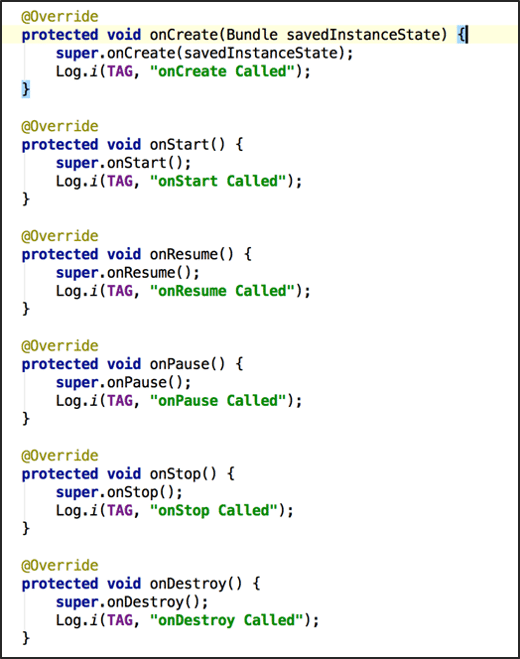 A service in Android is a background process that is used to perform long-running operations. Let’s say a service of type location is active in the background while the user is in different applications. So it does not disturb the user interaction with an activity. Now, services are classified into two types, namely:

It is implemented as a subclass of  Service as follows :

They are implemented as a subclass of  BroadcastReceiver class, and each message is broadcaster as an  Intent object.

Content Providers manage access to a structured set of data. It is the standard interface that connects data in one process with code running in other processes. They encapsulate data and provide mechanisms for defining data security. Content Providers are used to share data between different applications.

They are implemented as a subclass of ContentProvider class and must implement as a standard set of APIs that enable other applications to perform transactions.

Finally, let’s move on to our last building block in Android (i.e. Manifest).

The manifest file plays an integral role, as it provides essential information about your app to the Android system. The system must have this information before it can run any of the app’s code. Manifest files performs various tasks such as: 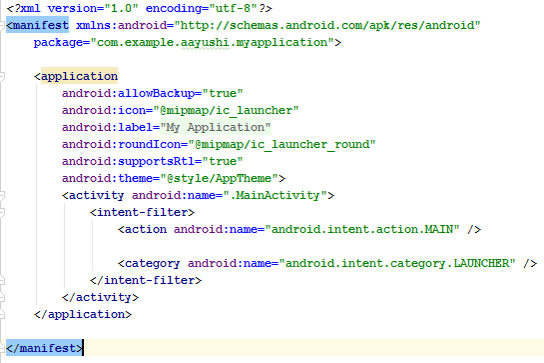 Moving ahead, let’s understand the anatomy of an android application. 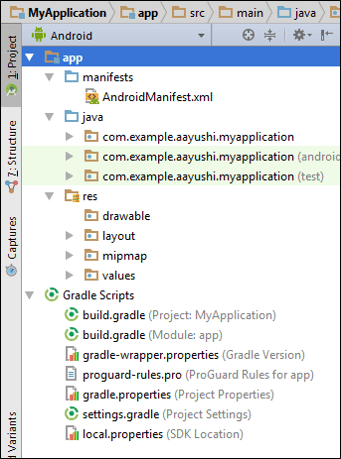 App: It describes the fundamental characteristics of the app and defines each of its components.

Res: It is a directory for files that define your app’s user interface. You can add TextView, button, etc. to build the GUI and use its various attributes, such as android:layout_width, android:layout_height, etc, which are used to set its width and height.

Now that you understand all the components in an Android app, let’s implement them!

First, let me excite you by telling that you can start developing Android applications on any operating system. It can be Microsoft Windows XP or a later version, Mac OS, or Linux.

Now, to start off with implementation, we need to install the following software:

Let’s get started by installing JDK in the system. To download it, you can follow the below steps: 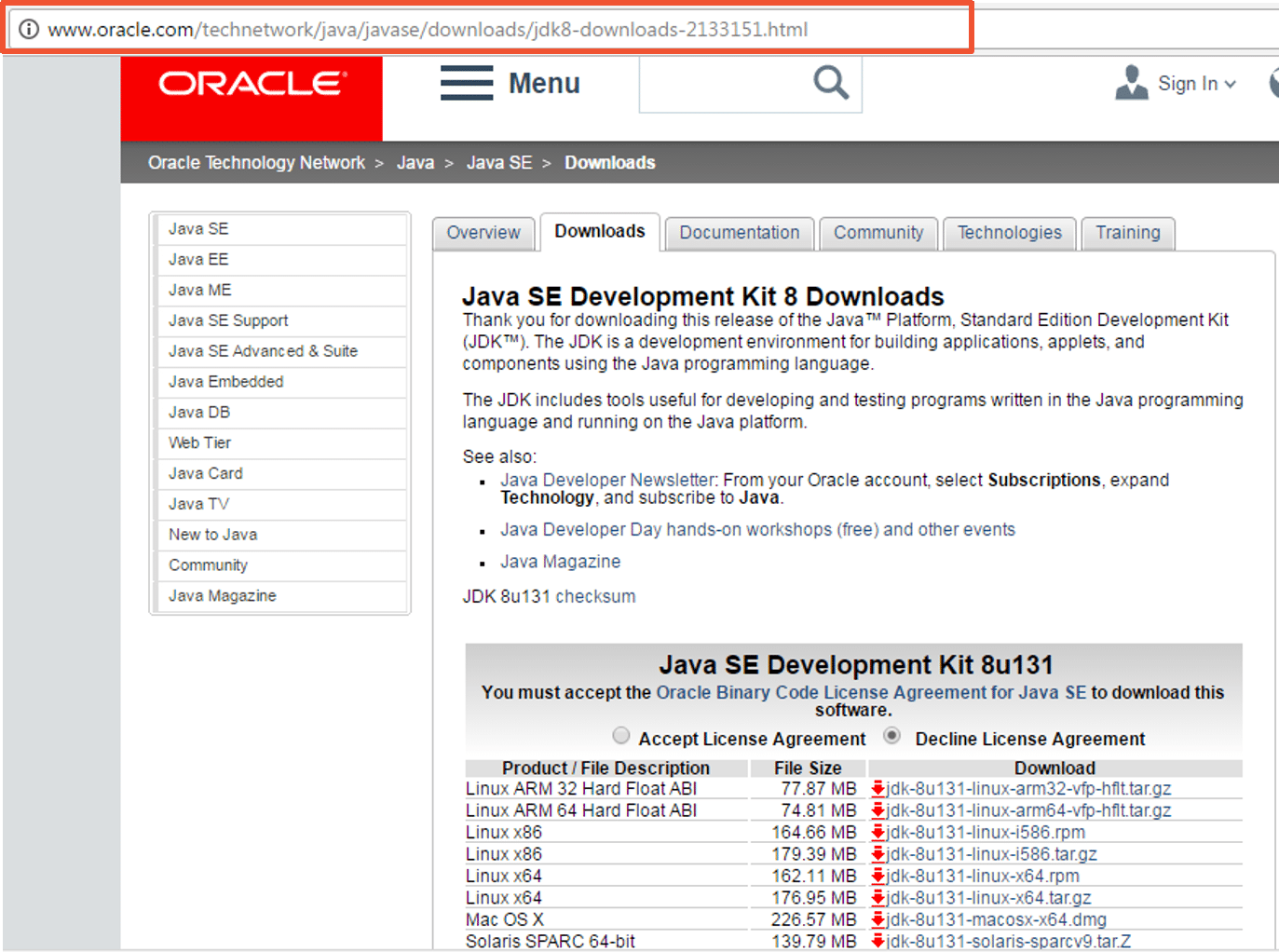 Once its there in your system, you can go ahead and follow the below process to download and install Android Studio on your system.

You can refer to the following screenshot to get a better understanding:

Let us move forward and do some hands-on coding where we will create a basic Android application. So, let’s begin coding! 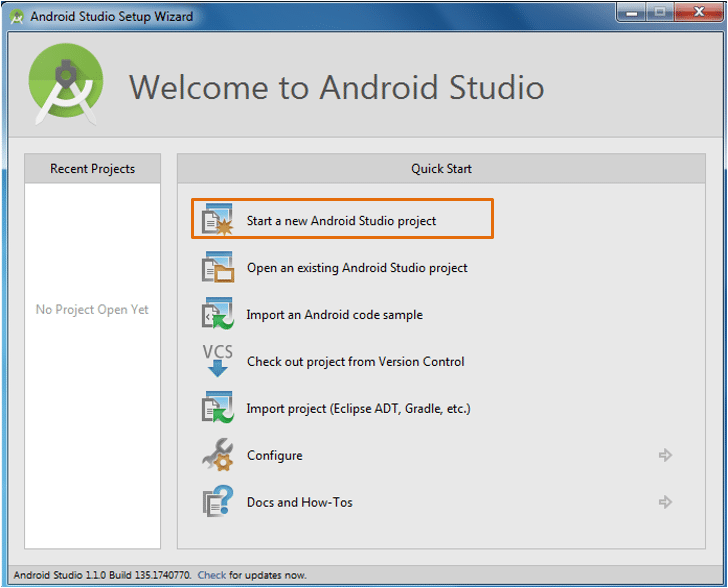 After that, you can configure your project by giving Application name > Company domain > Package Location > click Next.

Then, you have to select the form factors your app will run on. Select Phoneand Tablet. Then, select the minimum SDK as API:9 Android 2.3 (Gingerbread). 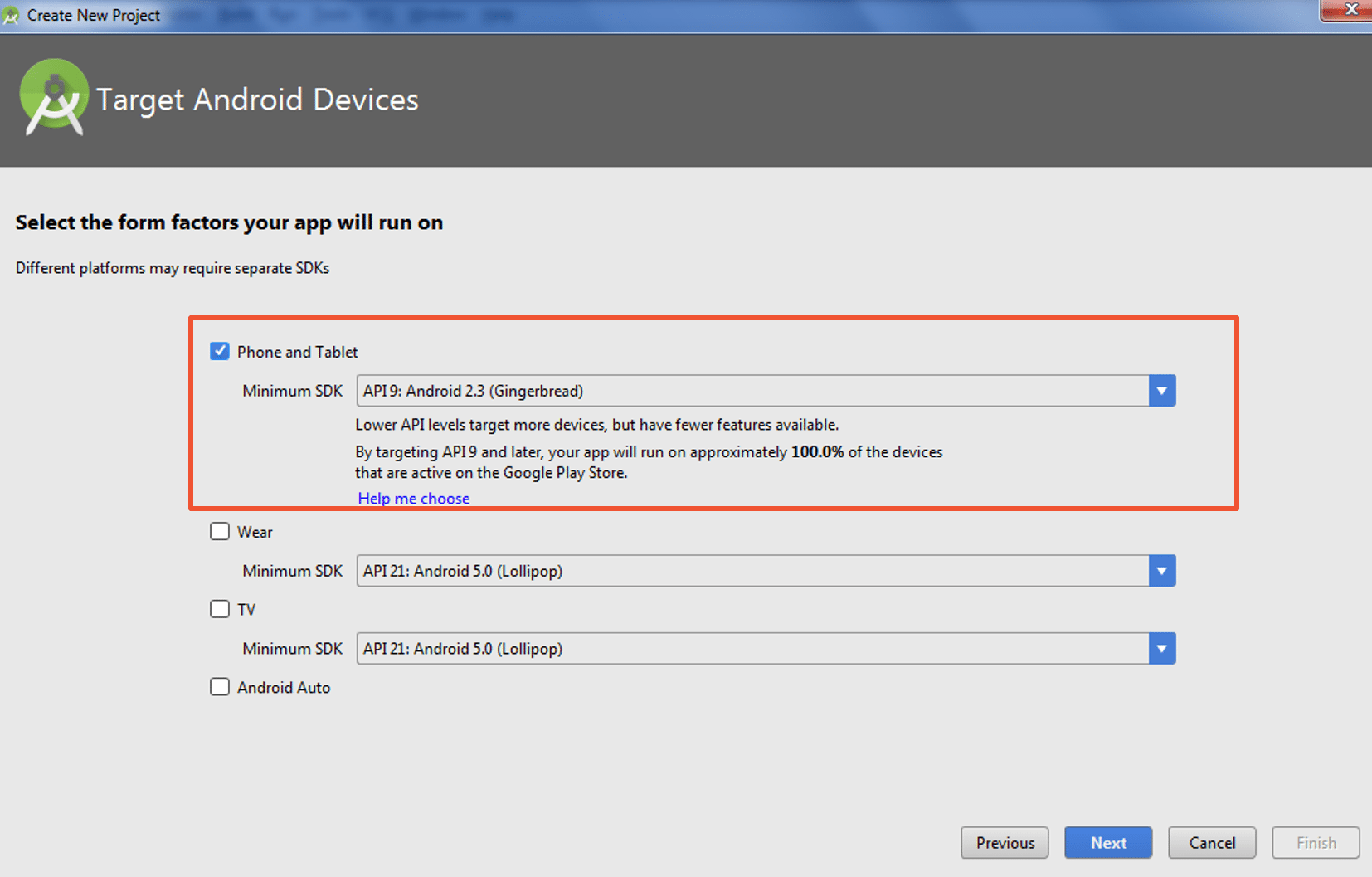 Now that the target device is set, we can add an activity to Mobile.

For starters, let’s select Empty Activity and click Next. 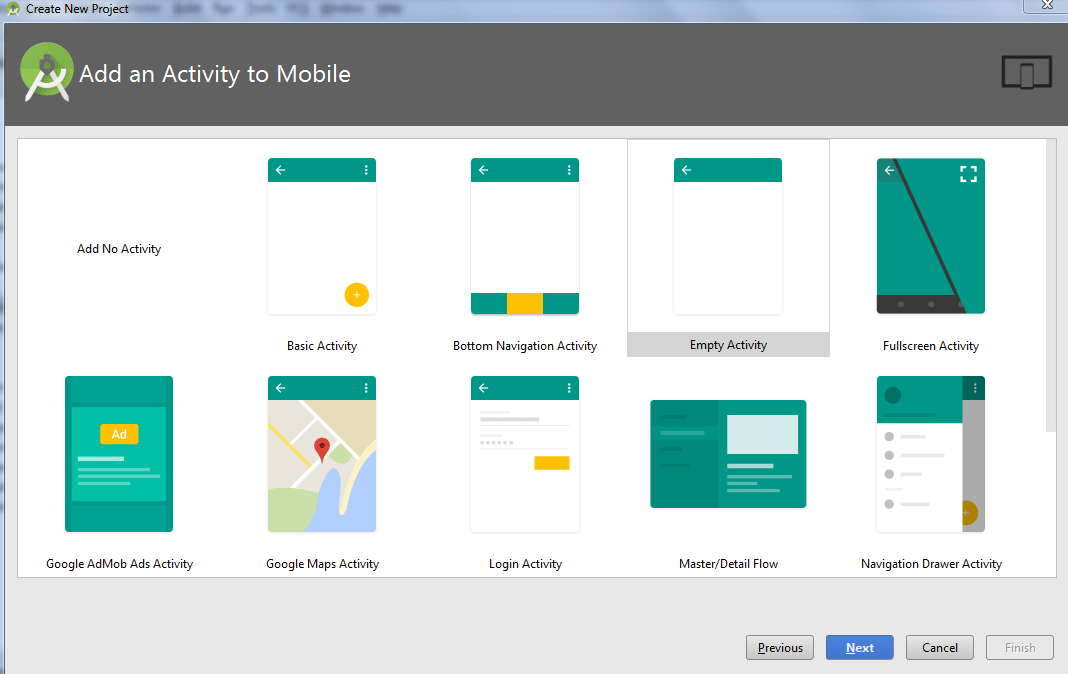 Adding an Activity to Mobile

Once you click on Next, you can customize your activity. In the “Customize the Activity” window, fill up the activity name and Layout name and click Finish.

Your project and activity have been created!

Let’s create an app that prints “Welcome to Edureka Android Tutorial”. For this, MainActivity.java file is the actual application file that will be executed first. So let’s have a look at the default code generated by the application for printing ‘Hello World’.

We’ve seen that the activities have a .java file extension. Let’s see the layout of the same activity. The activity_main.xml file is located in the res/layout folder. This file is referenced by your app when you build your UI. By default, "Hello World" printed related to the default layout. You can change the android:text=” Welcome to Edureka Android Tutorial” and size of the text in your layout file as written in the following code.

You are all done with the code. let’s run the app now!

For executing the code, you can directly Run ‘app’ or press ‘Shift+F10.’ Once you run it, it will ask you to select a deployment target. You can either connect your Android device through USB or create a virtual device. To create one virtual device, you can click Create New virtual device and choose the device according to your needs. Refer to the screenshot below: 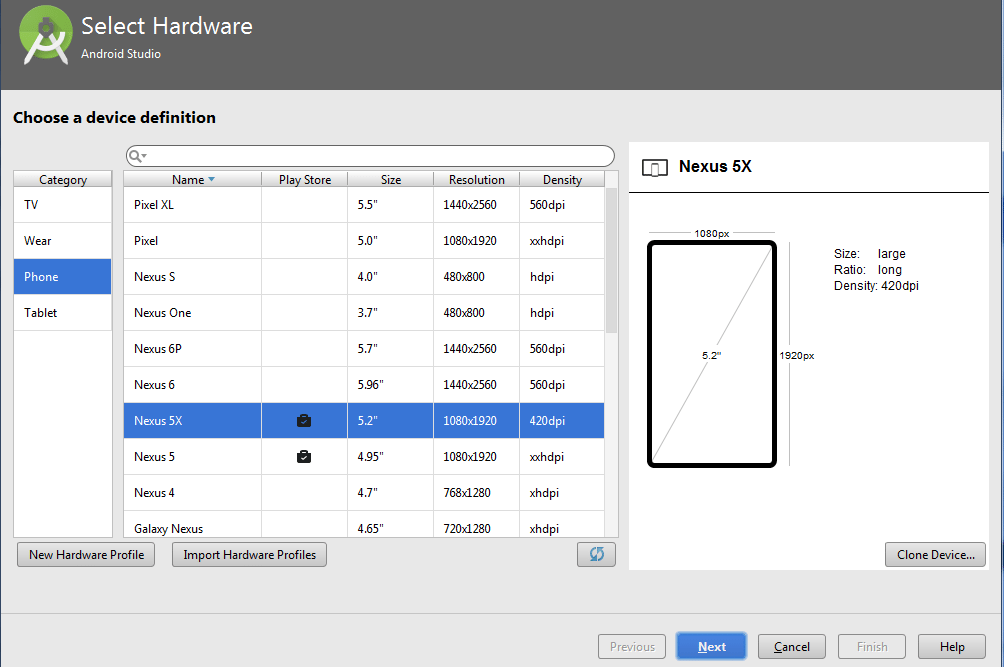 I have opted for Nexus_6 as my Android Emulator. Android Studio installs the app on your emulator, and if everything is fine with your set-up and application, the following screen will be displayed. 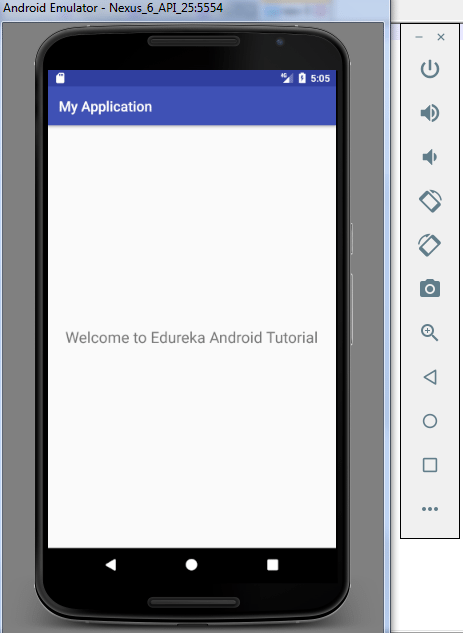 This is the end of the Android tutorial blog. I hope you guys are clear about each and every aspect that I have discussed above. Stay tuned for other blogs and good luck with your Android Development career.