This series will be arranged in different parts to discuss different services, topics, and/or technologies needed for application deployment and execution.

Databases are one of the basic building blocks of many different types of applications. They can be relational or NoSQL or both. In this post, we will cover how to set up a PostgreSQL database running on AWS EC2 in a private subnet of a VPC.

Then we will try to connect to it via a NodeJS application that will be running locally on the same machine.

I’ve recently written some posts on DZone about different Amazon Web Services. In those posts, I covered many different areas of AWS and those shall provide enough background information to help us deploy various application workloads in AWS.

Here are the Links:

If you are new to AWS or want to refresh some of the background knowledge which I will be using in this series, you can read the above-mentioned posts as needed.

I have already set up a VPC with public and private subnets, created an internet gateway, security groups, and route tables, and configured the traffic flow.

Here is how the VPC is set up. It has two subnets, an internet gateway, two custom route-tables, and few security groups:

I also configured inbound/outbound rules as shown in the diagram above.

Next, I launched two EC2 instances (one in each subnet) as shown in the diagram below:

AWS Infrastructure setup up to this will be the starting point for this series. You can learn about all the above parts needed to set up this infrastructure from the posts links mentioned above.

Now, we want to install PostgreSQL on the Ubuntu EC2 instance running in the private subnet.

Cool. installation is done and let's do a small test to confirm that it is working.

Here is the output of actions:

Next, connect to productsdb and create a products table by executing some SQL:

You can see that table is created as expected:

Next, Let’s insert some test data using SQL as follows:

And if we execute the select statement again, we can see that now we have some test data in the table: 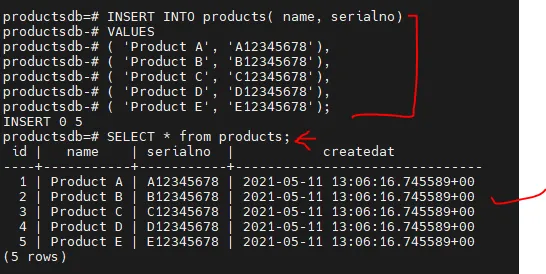 Ok, up to this point, the Postgres installation is working as expected, we also created a database with one products table and some test data.

Also, you can change the password for Postgres as follows:

So far, we are executing SQL statements locally on the EC2 instance which we are connected to via Bastian Host (aka jump-server).

Now, instead of PostgreSQL, if you want to use MySQL, you just need to execute the corresponding apt-get commands to install the relevant package on you Ubuntu machine.

Connecting with An Application Running Locally

This part is optional, you can use Java, .NET Core, Python, or any other programming language. I’ve created a very simple git repo for a Nodejs application. The application tries to read data from productsdb database and products table. I cloned the repository on the same Ubuntu instance where Postgres is installed:

Then simply run the application:

You can see that server is up and running.

If for some reason node or npm is not installed on your ubuntu machine, you can install those using the following commands:

Now, I make another SSH connection to ubuntu EC2 (via jump host) and make a curl request on port 3000 as follows:

As you can see the Node application is able to read the data from the Postgres database.

Here is the code for server.js: 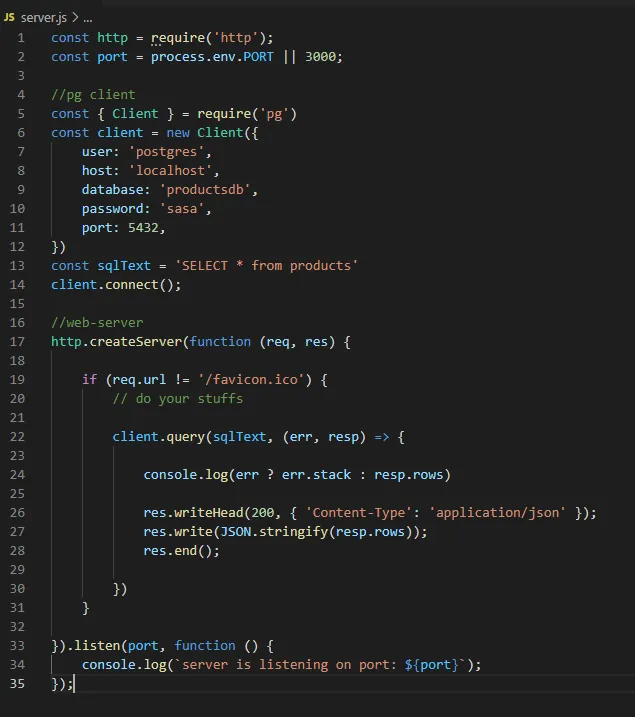 Node application is simply using pg library for the database connection and query and returning the data.

Following diagram shows the application and database running on the same EC2 instance: 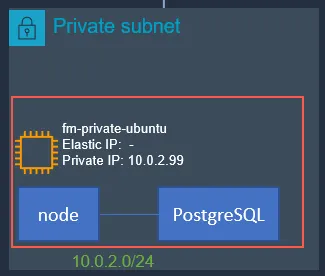 This was the first post in series about application deployments on AWS. We talked about some background information and discussed a basic VPC setup with two subnets and two EC2 instances.

We then installed PostgreSQL on an Ubuntu EC2 instance running in a private subnet with some test data. We also test the database connectivity with a locally running Nodejs application. You can download the application code from this Git repo.

Till next time, Happy coding!