Mid-January, I held a talk at Kotlin.amsterdam based on my post Migrating from Imperative to Reactive (a Spring Boot application). Because it was a Kotlin meetup, I demoed Kotlin code, and I added a step by migrating the codebase to coroutines. During Q&A, somebody asked whether coroutines implemented backpressure. I admit I was not sure of the answer, so I did a bit of research.

This post provides information on backpressure in general and how RxJava (v3), Project Reactor, and Kotlin's Coroutines handle it.

Back pressure (or backpressure) is a resistance or force opposing the desired flow of fluid through pipes, leading to friction loss and pressure drop.

In software, backpressure has a slightly related but still different meaning: considering a fast data producer and a slow data consumer, backpressure is the mechanism that 'pushes back' on the producer not to be overwhelmed by data.

Whether based on reactivestreams.org or Java's java.util.concurrent.Flow, Reactive Streams provides four building blocks:

The Subscription is at the root of backpressure via its request() method.

The specifications are pretty straightforward:

A Subscriber MUST signal demand via Subscription.request(long n) to receive onNext signals.

The intent of this rule is to establish that it is the responsibility of the Subscriber to decide when and how many elements it is able and willing to receive. To avoid signal reordering caused by reentrant Subscription methods, it is strongly RECOMMENDED for synchronous Subscriber implementations to invoke Subscription methods at the very end of any signal processing. It is RECOMMENDED that Subscribers request the upper limit of what they are able to process, as requesting only one element at a time results in an inherently inefficient "stop-and-wait" protocol.

-- Reactive Streams specifications for the JVM

But it falls outside the specifications' scope to define how to manage items emitted by the producer that cannot be handled downstream. While the problem is pretty simple, different solutions are possible. Each Reactive framework provides some options, so let's see them in turn.

Among these classes, Flowable is the only class that implements Reactive Streams — and backpressure. Yet, providing backpressure is not the only issue. As RxJava's wiki states:

Backpressure doesn’t make the problem of an overproducing Observable or an underconsuming Subscriber go away. It just moves the problem up the chain of operators to a point where it can be handled better.

To cope with that, RxJava offers two main strategies to handle 'overproduced' items:

The following diagram summarizes the different methods that implement those strategies: 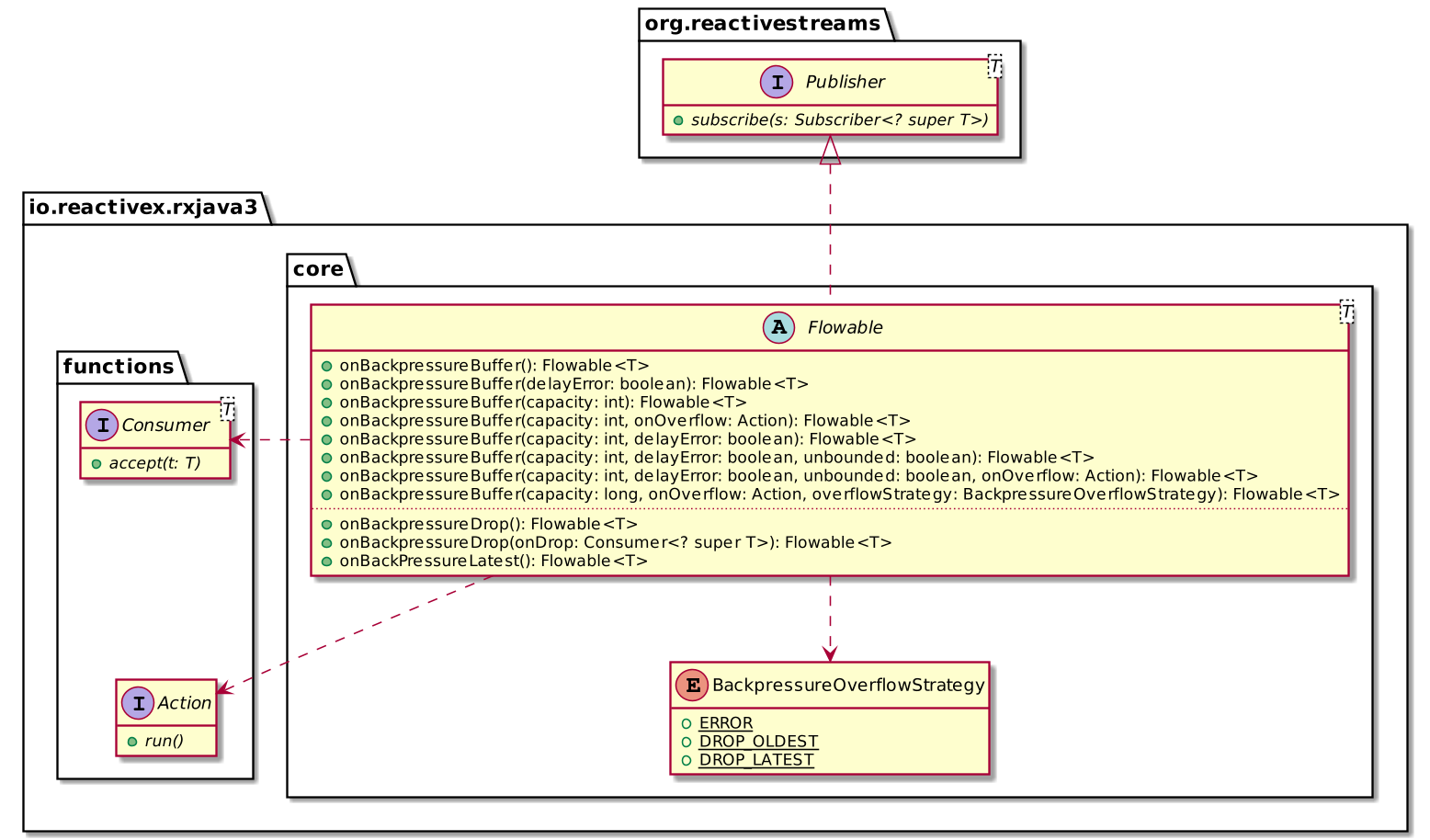 Note that the onBackPressureLatest operator is similar to using onBackpressureBuffer(1):

Note that I took the above Marble diagrams from RxJava's wiki.

Compared to other frameworks, RxJava offers methods to send an overflow exception signal after sending all items. These allow the consumer to receive items and still be notified that the producer has dropped items.

Strategies offered by Project Reactor are similar to those of RxJava's.

The APIs have some slight differences, though. For example, Project Reactor offers a convenient method to throw an exception if the producer overflows:

Compared to other frameworks, Project Reactor offers methods to set a TTL for buffered items to prevent overflowing it.

Coroutines do offer the same buffering and dropping capabilities. The base class in coroutines is Flow.

All in all, RxJava, Project Reactor, and Kotlin coroutines all provide backpressure capabilities. All cope with a producer that is faster than its subscriber by offering two strategies: either buffer items or drop them.

Thanks to my friend Oleh Dokuka for his kind review.

Originally published at A Java Geek on March 14th 2021.