This article will guide you through the creation of a JavaFX GUI barcode reading application (as shown below) using Dynamsoft Barcode Reader SDK (DBR) and vlcj.

vlcj is a Java framework to allow an instance of a native VLC media player to be embedded in a Java application. With it, we can easily capture video streams in our JavaFX application.

To get familiar with using Dynamsoft Barcode Reader SDK in JavaFX, we can create a GUI application first.

What We Will Do in This Article 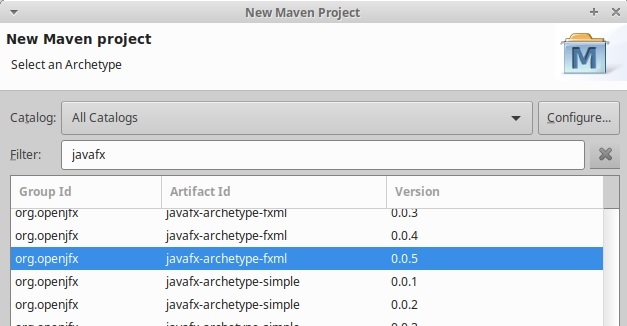 You could specify the parameters of the project in the next step. 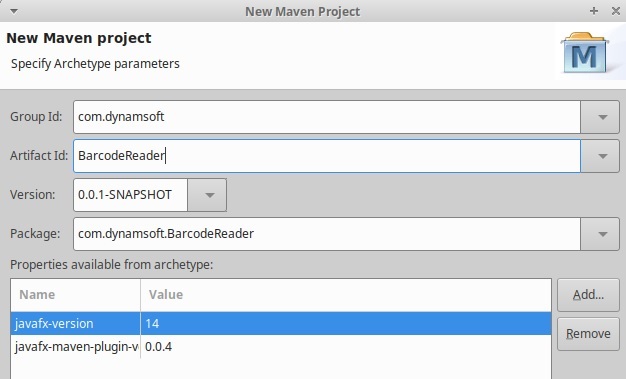 The structure of the new project is shown in the following image. 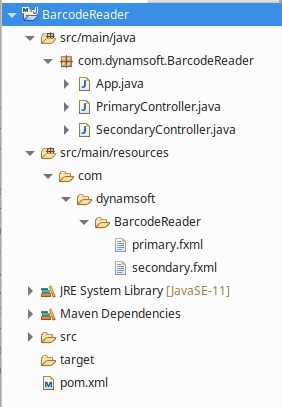 There are sample Java and FXML files in the project. Here, we just delete them.

Add dependencies of Dynamsoft Barcode Reader and vlcj in the pom.xml.

vlcj’s JavaFX library uses the latest features of JavaFX like PixelBuffer to improve performance, so the minimum version of JavaFX is 13. JavaFX Swing is used to convert JavaFX’s Image to BufferedImage for DBR to decode.

Design the Interface and Link to A Controller Class

We can create layouts by code as well as using FXML. FXML can be used in pair with Scene Builder. Here, we use FXML to create the layout.

We use AnchorPane as the root element: 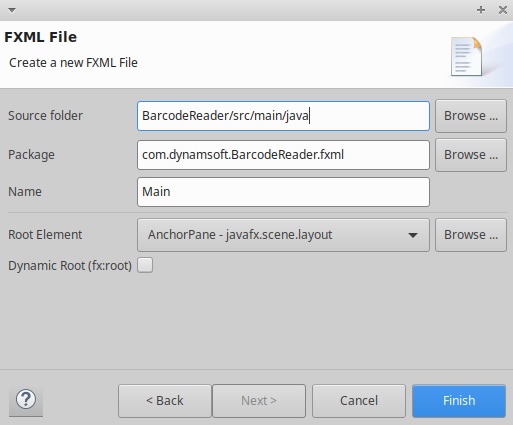 AnchorPane is a useful layout in JavaFX. It allows the edges of child nodes to be anchored to an offset from the anchor pane’s edges.

The final result is as below. 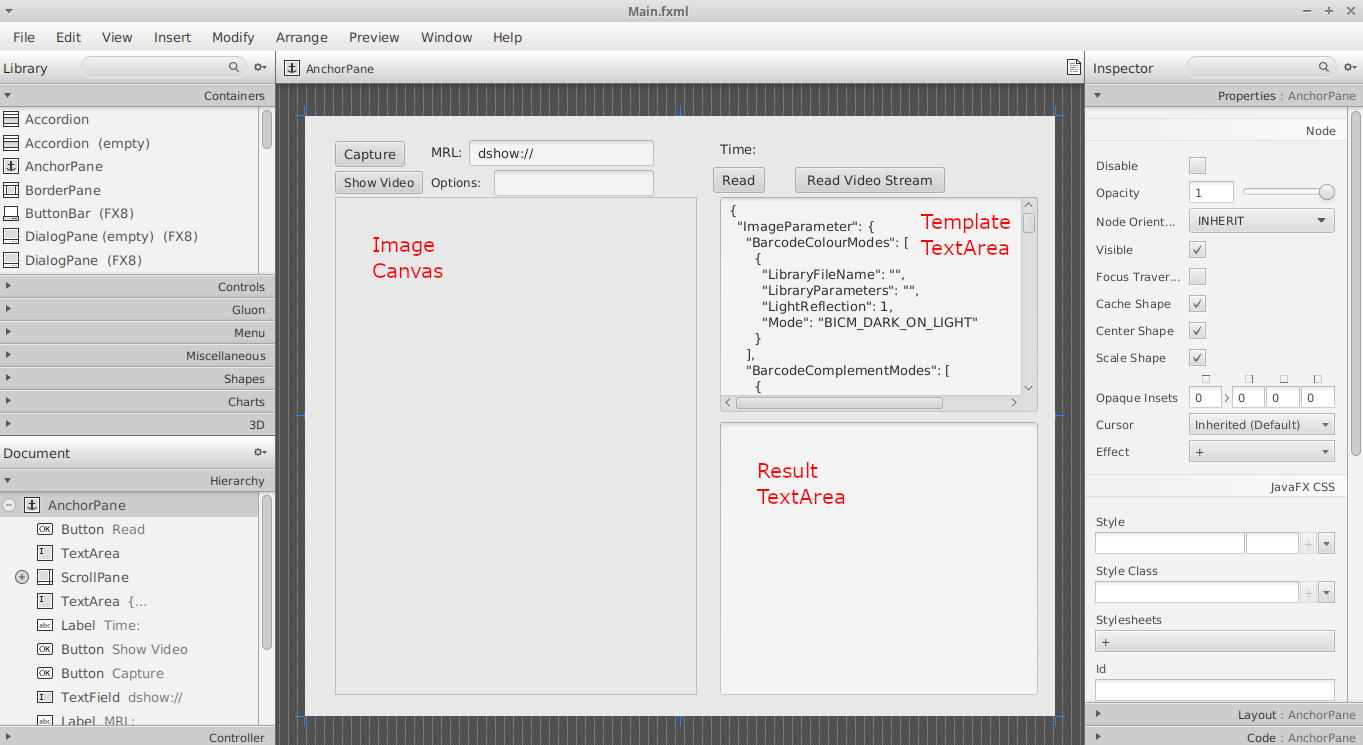 Specify the fx:id for nodes so that we can access them in the controller class.

For example, we need to access the TextField which is used to store the MRL of VLC.

Specify the events for nodes so that we can handle them in the controller class.

Create a class named Main as the main application and load the layout with it.

Read Barcodes from a Local Image

A canvas is used to show the image to decode and the detected areas of barcodes. Users can click the canvas to call FileChooser to select a local image file and then use DBR to read barcodes.

The major decoding operations lie in the decodeImg method. It will decode the current image, output the reading results and display the time elapsed.

There are some helper methods. redrawImage will reset the canvas with the new image. overlayCode will draw the outlines of detected barcodes on the canvas. unifyCoordinateReturnType is used to unify the coordinate unit to pixel. The unit of coordinate can be pixel or percentage. updateRuntimeSettings will try to init the runtime settings with the template and call unifyCoordinateReturnType.

Wrap the Decoding Process to a Thread

The decodeImg method above will block the UI thread. We can take a step further to wrap the decoding process to a Thread.

Please note that if we want to update the UI of a JavaFX application, we need to call Platform.runLater or a Not On fx application thread error will occur.

We want to read barcodes from various sources, such as local images, videos and Web/IP cameras. VLC is a good match and with vlcj, we can easily integrate it into our application.

Remember to make vlc a property to prevent it from being garbage collected, or the program will crash.

We can capture a frame and decode it manually.

It is also possible to do real-time barcode reading from the video stream with a timer.

A property found is used to store the status of whether DBR has got results from the video stream so that decoding threads still running will not overwrite the detected results.

The decoding thread has a new constructor which only requires the callback argument. It will try to get the current frame as the image to decode.

The callback method is also adapted for reading video stream.

Export to a Runnable Jar

All right! We have finished the application. We can right-click on the project and export it to a runnable jar file to run it in other places. 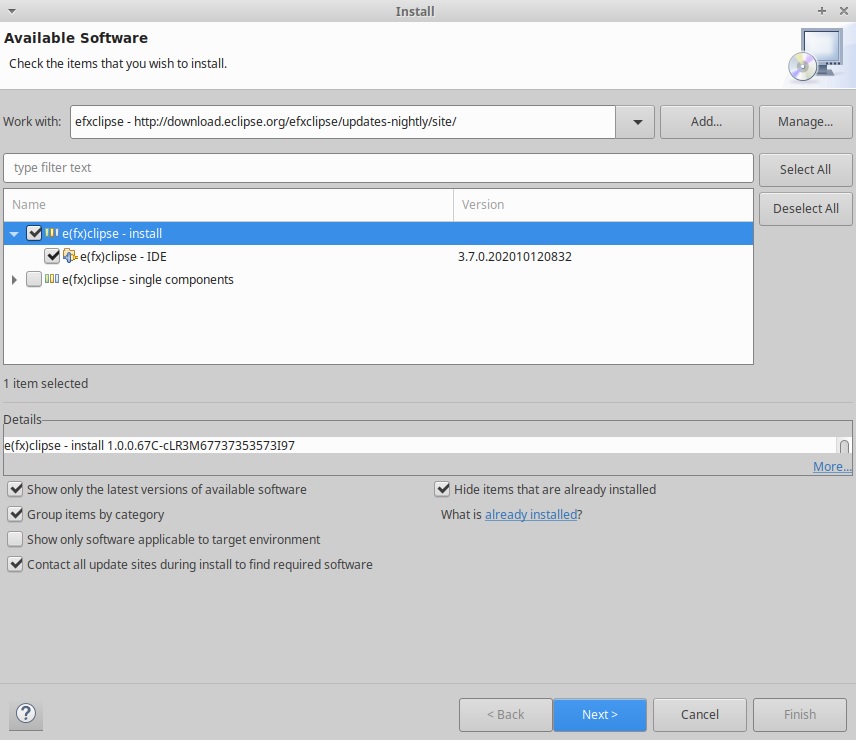 To make the Open with SceneBuilder context menu work, go to Windows > Preferences > JavaFX, set up the path to Scene Builder. 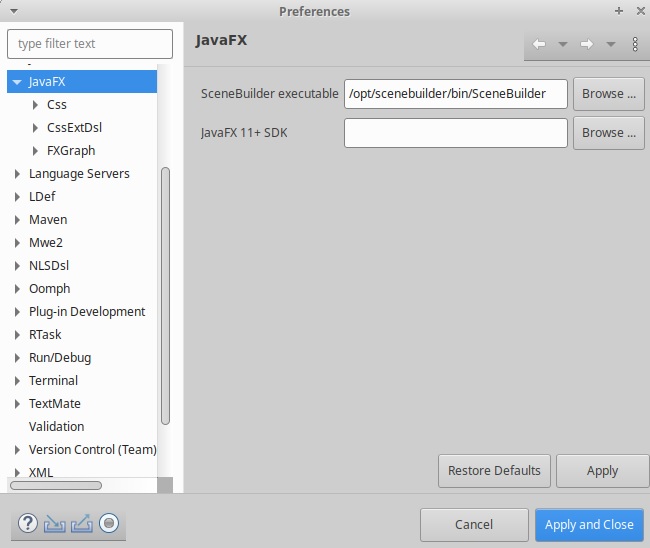 The source code of the project is available here: https://github.com/Dynamsoft/desktop-java-barcode-reader.

Published at DZone with permission of Lihang Xu. See the original article here.