today, i thought a lot about how to examine different databases. choosing a database is often a daunting task. there's a lot of confusion, a 'theorem', and more than all, the immortal proverb 'not one size fits all'. as if it helps.

one of the first things that you realize, when examining nosql distributed databases (and how could you not)is that these days databases are like cars: they're all good. old fashioned sql databases can scale in and out, horizontally sharded over several machines to achieve high availability. nosql systems claim to be consistent. what difference then does it make what database would you choose?
the availability and consistency that i mentioned comes, of course, from the misunderstood cap theorem , that - so people say - states that you can only choose 2 out of the 3
usually its depicted in a nicely equilaterl triangle, as this one from ofirm : 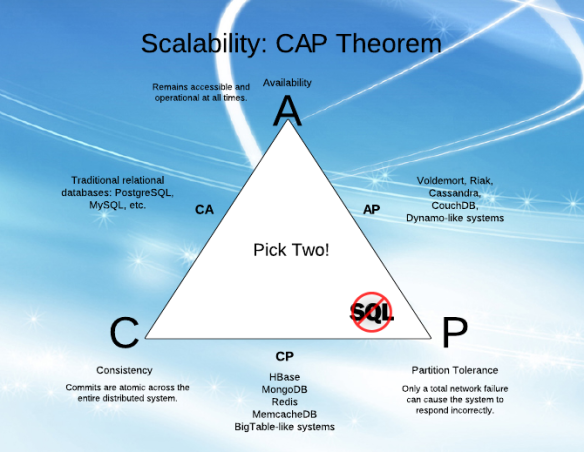 there's a nice proof and explanation of it in this 4 minute video here . but if we think about it, and also see some of brewer's (the theorem author) later remarks , we'll see that the 2 out of 3 is really 1 out of 2:

it's really just a vs c!

and this is simply because:
that's it! and since this decision is temporary, it exists only for the duration of the delay, some may say that we are really contrasting latency (another word for availability) against consistency.

by the way, there's no distributed system that wants to live with "paritioning" - if it does, it's not distributed. that is why putting sql in this triangle may lead to confusion.
Database Theorem IT Machine sql NoSQL Data (computing) Task (computing) Lock (computer science)