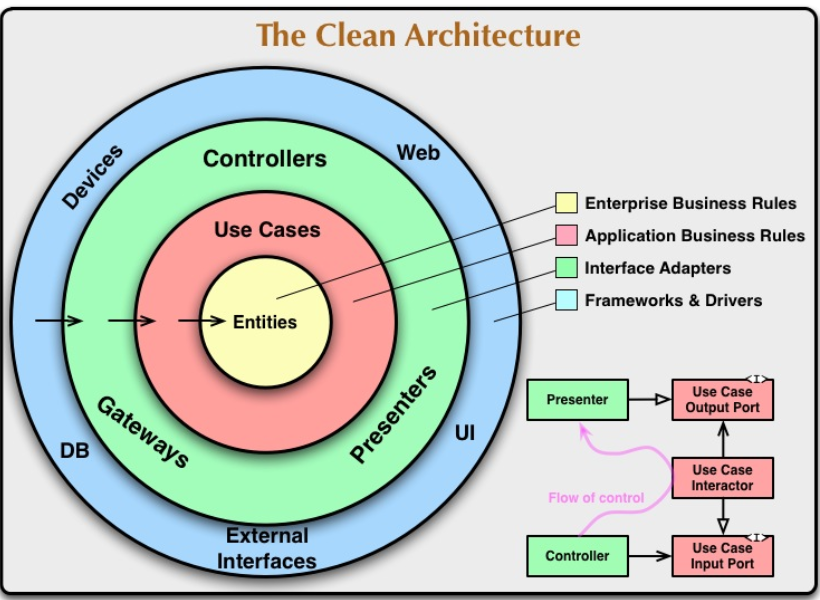 today, architectures such as the onion or hexagonal patterns play an important role in the testability and maintenance of code, its independence from external frameworks, etc. in this tutorial, i will show you how to use clean architecture, with methods and tools such as domain-driven design (ddd), test (behavior) driven development (tdd), cqrs, event sourcing, containerization, oauth2, and oidc to build a microservices architecture.

for more information on clean architecture, i suggest you read this article by robert c. martin (uncle bob).

according to uncle bob ,

"the concentric circles [in the graphic above] represent different areas of software. in general, the further in you go, the higher level the software becomes. the outer circles are mechanisms. the inner circles are policies.

"the overriding rule that makes this architecture work is the dependency rule. this rule says that source code dependencies can only point inwards. nothing in an inner circle can know anything at all about something in an outer circle. in particular, the name of something declared in an outer circle must not be mentioned by the code in an inner circle. that includes functions, classes. variables, or any other named software entity.

so, cqrs will be a very useful concept in the world of microservices by creating our application with two databases: 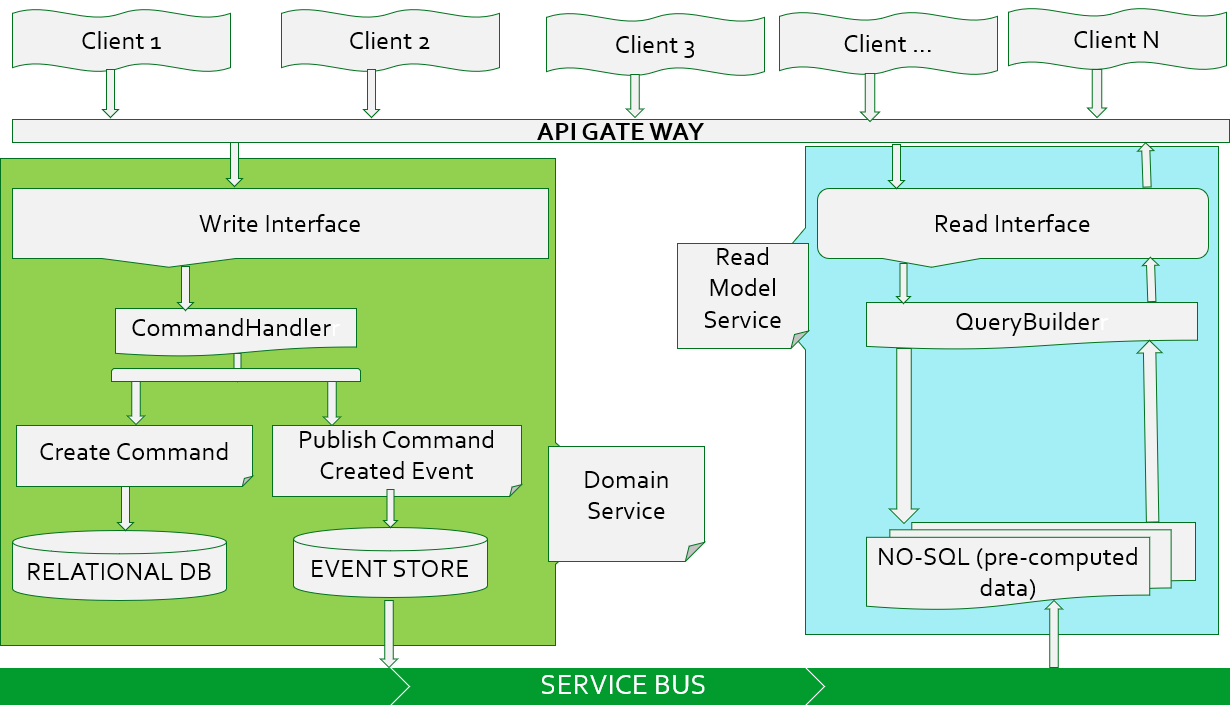 event sourcing stores all changes to an object as a series of events in an event store
https://eventstore.org/

i will use this concept to build the following:

i will build a system that helps speakers and attendees to register and follow events (conferences, talks, meetups, etc...).

my project is structured as follows:

this layer points to the core domain and contains the application-specific business rules.

the above code allows us to:

this layer holds the web, ui, and presenter concerns. in the context of our api, this means it accepts input in the form of http requests over the network (post/put/patch/delete) and returns its output as json formatted content.

in the code below, we are implementing the "speech registration" use case:

to make my tests green, the first thing i need to do is implement registerspeechusecase :

the overriding rule that makes this architecture work is the dependency rule. this rule says that, "source code dependencies can only point inwards. nothing in an inner circle can know anything at all about something in an outer circle." ( robert c. martin (uncle bob) ). 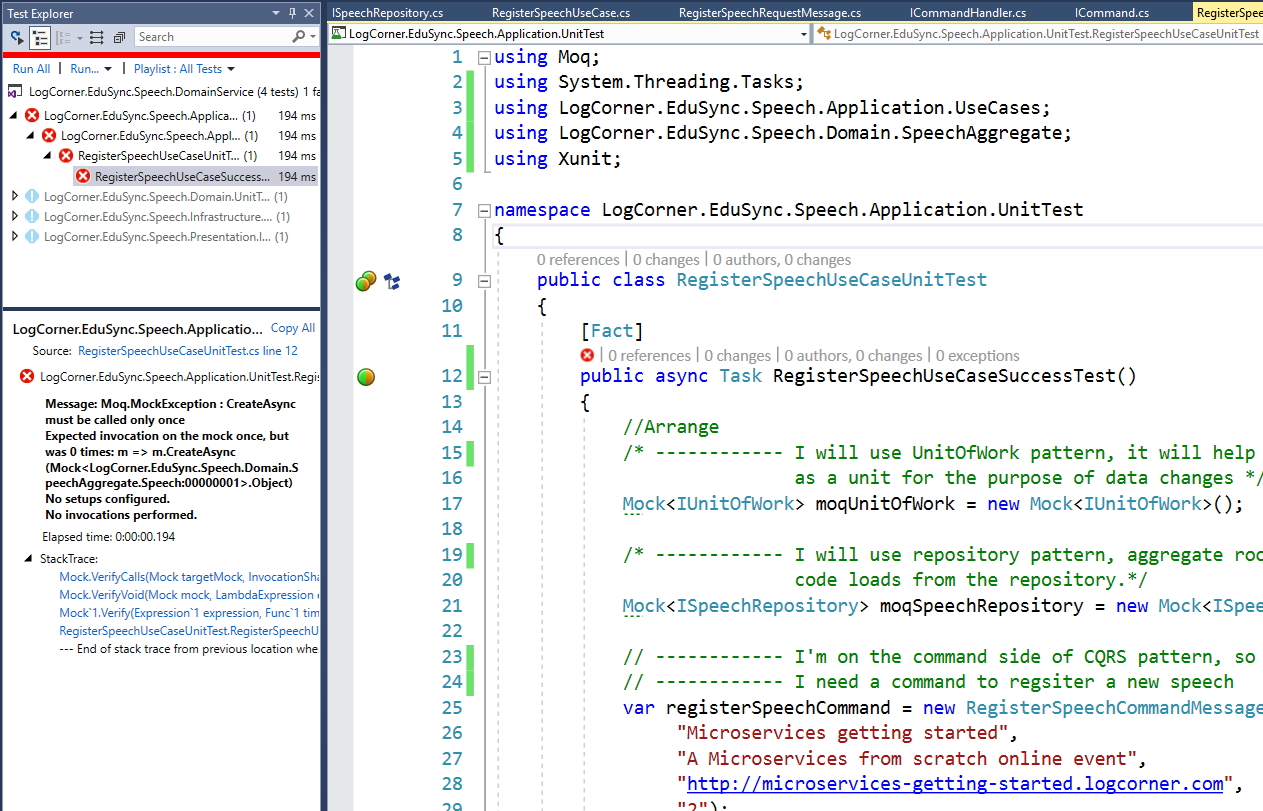 it takes an input object as a command and then renders the interface:

let us defines dependencies such as iunitofwork and ispeechrepository . these interfaces belong to the core domain and will be implemented in the infrastrucrure.

ispeechrepository needs a speech entity, so let's create it on the core domain.

in this stage, every thing compiles succesfully, but my tests failed:

as you can see, tests fails because i verify that createasync and commit are called. so, let us call:

then we create a mock of speechrepository.createasync and iunitofwork.commit on the 'arrange' section of the unit test.

at this stage, all tests are green but my code coverage is not good enough:

for example, if i comment out this block my tests will succeed but my app will crash at runtime if the command is null.

let us add a new test to fix it:

finally, the code coverage is 100% for logcorner.edusync.speech.application

but what happens if i permute values?

all tests will succeed but my application will be in an invalid state because it will insert the title instead of the url.

i can fix this using moqspeechrepository.verify in test assertions, but i'll leave it like that and fix it when implementing my domain with the introduction of the values objects:

in the next post, i will implement the domain model.