Release Automation is the cornerstone of modern Software Delivery. Well-established CI/CD pipelines are fundamental to every organization that wants to embrace DevOps/GitOps methodologies in order to achieve:

The benefits of CI/CD for businesses undoubtedly should be the first priority no matter what kind of 'Agile' or other methodology is used for project management. Articles like Benefits of Continuous Integration for Businesses and IT Teams or Why the World Needs CI/CD, explain the importance for all stakeholders.

As very well stated in Deloitte Engineering Semantic Versioning with Conventional Commits article, the deficiencies usually encountered when trying to apply CI/CD, are:

If the developers sit wondering how to do certain tasks, then the process is broken. They should know how to release a new version or how to hotfix production while the trunk (or "master" branch) has moved on. And your CI/CD processes should support these scenarios.

Nowadays, since many companies have embraced microservices architectures and there are no Application Servers managing deployments, there is a need for the proper tooling to manage the lifecycle of multiple microservices instances regardless of their technology stack. Creating and maintaining manually things like deploy scripts, static network configurations (IPs, ports, etc.) are (or rather should be) a thing of the past.

An obvious solution to meet the above requirements is to adopt Docker, Containers, and Kubernetes. However, like most things in IT, there is no 'one size fits all' approach and while Kubernetes is of course a mature and well-established solution, it is not a panacea.

In this article we will demonstrate an opinionated CI/CD approach which can be further extended and adapted to suit different needs and is based on:

Let's dive into it. We will begin by answering the question 'why Nomad?'

There are many articles out-there tackling this question coming from heterogeneous sources. Here is a short-list:

You are encouraged to check them out both for an introduction to Nomad and a comparison with Kubernetes.

For the impatient, the bottom line is that while Kubernetes has become the de-facto orchestrator in the market and might be able to meet all of your requirements, it is not the most straightforward tool to adopt. It comes with a quite large ecosystem and tooling that require experience and significant effort to select, setup, and maintain, often providing way more features than what teams might typically need. Using a managed Kubernetes service (such as those provided by Google, Amazon, and Azure) greatly simplifies the operations side of a Kubernetes cluster, but it still requires some fundamental in-house knowledge that needs to be developed.

Nomad by HashiCorp (first released in 2015) is a workload orchestrator that provides a wide variety of capabilities with one very noteworthy trait: it is straightforward to deploy. It is less intrusive by design, as Nomad only delivers the function that you might be looking for in an orchestrator — namely deploying and managing applications. Let's highlight some of its important features:

Here is a rough comparison table between Kubernetes and Nomad: 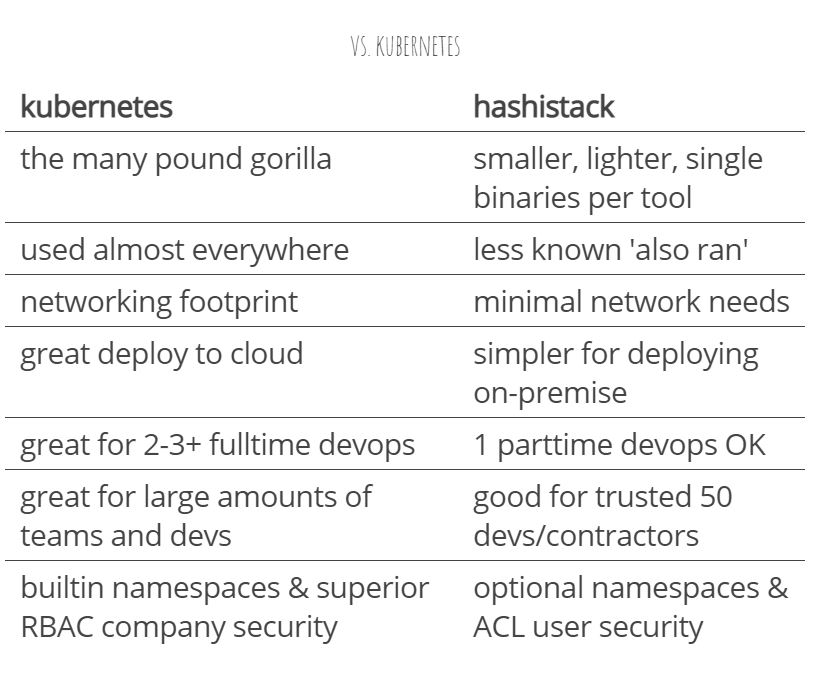 One reported Nomad 'missing' feature (compared to Kubernetes) was until recently the lack of auto-scaling capabilities. However, with the introduction of the Nomad Autoscaler, there is now support for:

Moreover, Nomad can be easily combined with other solutions of the so-called HashiStack (aka The HashiCorp Stack) like Consul for Service Discovery, Centralized Configuration Management, and Service Mesh capabilities, Vault for Secrets Management, and tools like Levant which is is an open-source templating and deployment tool for Nomad that provides real-time feedback and detailed failure messages upon deployment issues. Last but not least, Nomad comes with a rich Web-based admin console, a CLI, and a REST API thus making it easily manageable both in a manual (human operator) and in an automated fashion (CI server during the execution of CI/CD pipelines).

The key takeaway from this section is that although there are cases of companies totally switching from Kubernetes to HashiStack for their own reasons, it doesn't mean that there is such a necessity if you have everything setup and running smoothly operation-wise and cost-wise. However, for those teams which have not yet begun their Kubernetes adventures, or those who only need 10% of Kubernetes and want something with a more thriving community than what Docker Swarm provides, then Nomad is a great option.

In the following sections we will show how we can use Nomad, Levant and Consul combined with CI/CD pipelines for automated releases to 'staging' and 'production' environments.

We want to automate the deployment of 3 Java-based microservices:

We want to achieve the following automation:

Each microservice is a separate GitLab Project and has its own repository. In the root folder of each project, the following files exist:

For the shake of a demo, we have used Google Cloud Platform (GCP) and provisioned a number of VM instances:

Note: as Docker Registry we will use Docker Hub. Keep in mind that the latest versions of GitLab do support both Maven and Docker registries so it's recommended to check these out before bringing in more dependencies to your infrastructure. 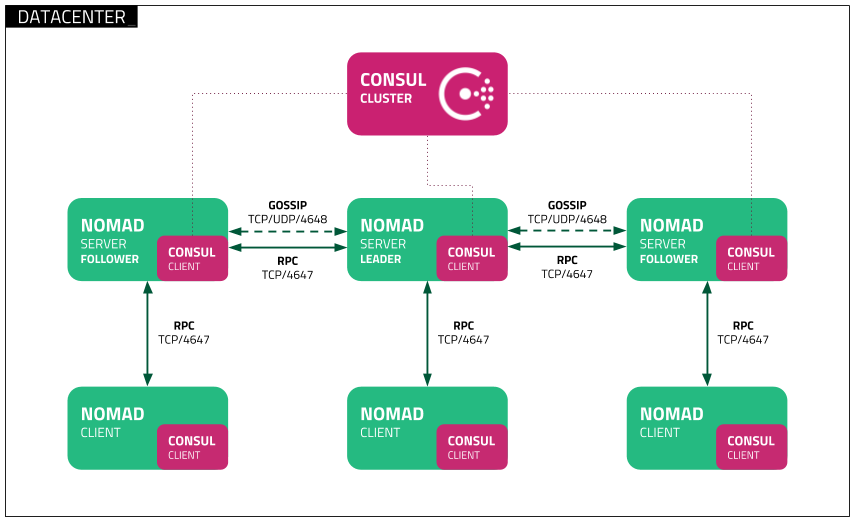 In our case, the topology is depicted in the following diagram: 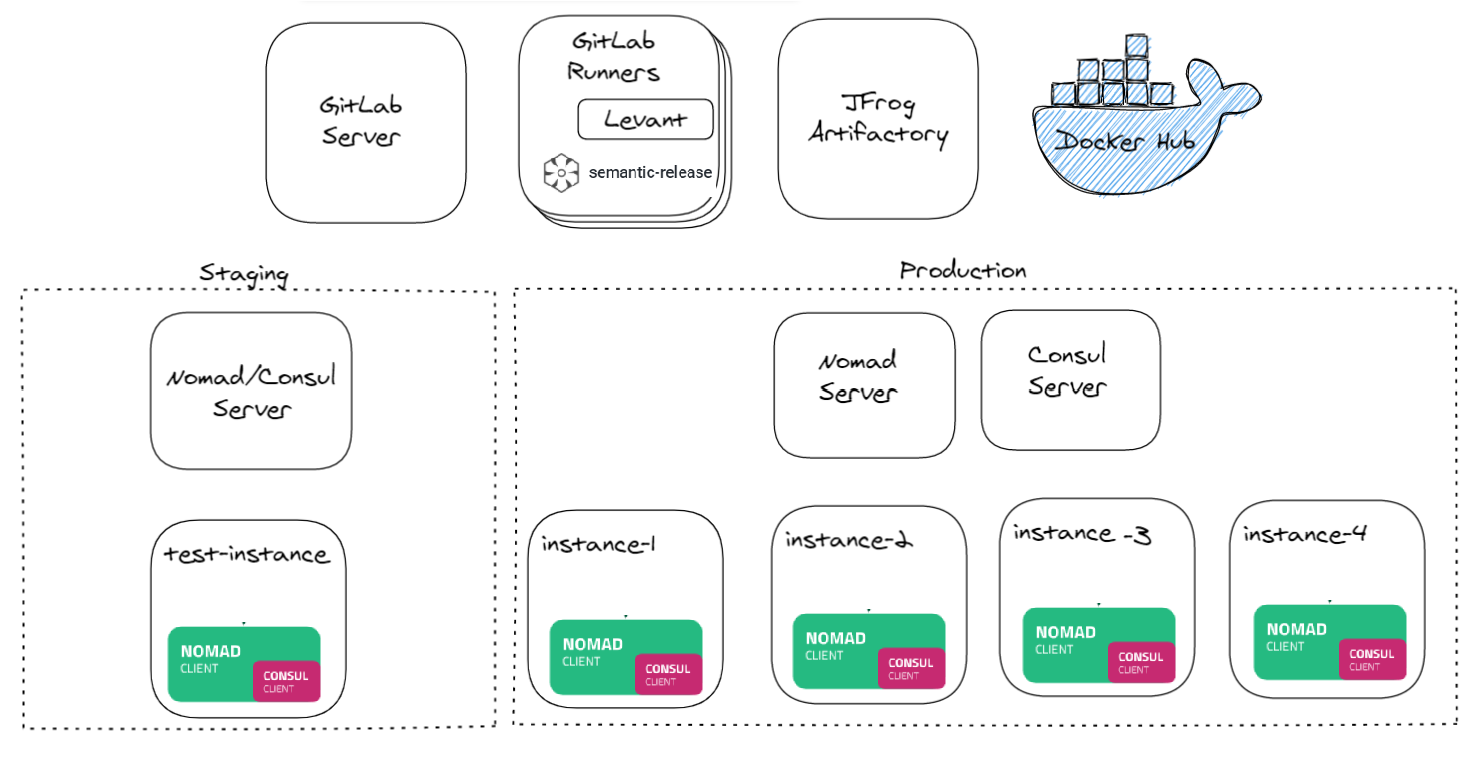 Let's see now how everything blends in, starting with a diagram of our CI/CD pipeline applicable per microservice:

First of all, we need to clarify that we go with GitLab Flow and the semantic-release recipe as described here.  You are encouraged to have a look at them if not already familiar. As mentioned above we have installed the @semantic-release/gitlab plugin. We have also authorized semantic-release (via a GITLAB_CI token) to perform actions on the repository, like creating releases and tags.

Now, let's say we have a master branch and we want to plan a new release. We create a branch named beta from the master branch. We can create other sub-branches from beta and work normally. Now, when there is a merge-request to beta and the merge is done, the following actions take place:

If everything is tested OK on the Staging server and we want to proceed to a production release, we make a merge-request from beta to master branch. Once the merge is done, a similar pipeline is executed but this time semantic-release plugin generates a proper 'release' version number (e.g., 1.0.0) and the deployment takes place on the Production environment. Moreover, semantic-release has created Release notes for us in GitLab and has created a proper Git Tag!

Let's wrap it up and watch all these in action, at the following YouTube screencast.