in this blog series, i'm going to create a small chat application using react and asp.net core, to learn more about react and to learn how react behaves in an asp.net core project during development and deployment. this series is divided into 5 parts, which should cover all relevant topics:

i also set-up a github repository where you can follow the project: https://github.com/juergengutsch/react-chat-demo . feel free to share your ideas about that topic in the comments below or in issues on github. because i'm still learning react, please tell me about significant and conceptual errors, by dropping a comment or by creating an issue on github. thanks.

signalr for asp.net core is a framework to enable websocket communication in asp.net core applications. modern browsers already support websocket, which is part of the html5 standard. for older browsers, signalr provides a fallback based on standard http1.1. signalr is basically a server-side implementation based on asp.net core and kestrel. it uses the same dependency injection mechanism and can be added via a nuget package into the application. additionally, signalr provides various client libraries to consume websockets in client applications. in this chat application, i use @aspnet/signalr-client loaded via npm. the package also contains the typescript definitions, which makes it easy to use in a typescript application, like this.

i added the react nuget package in the first part of this blog series. to enable signalr i need to add it to the servicecollection:

in c#, i created a chatservice that will later be used to connect to the data storage. now it is using a dictionary to store the messages and is working with this dictionary. i don't show this service here because the implementation is not relevant here and will change later on. but i use this service in the code i show here. this service is mainly used in the chatcontroller , the web api controller to load some initial data and in the chathub , which is the websocket endpoint for this chat. the service gets injected via dependency injection that is configured in the startup.cs :

the chatcontroller is simple, it just contains get methods. do you remember the last posts? the initial data of the logged on users and the first chat messages were defined in the react components. i moved this to the chatcontroller on the server side:

the method loggedonusers simply created the users list. i will change that if the authentication is done. the method initialmessages loads the first 50 messages from the faked data storage.

the websocket endpoints are defined in so-called hubs. one hub is defining one single websocket endpoint. i created a chathub , that is the endpoint for this application. the methods in the chathub are handler methods, to handle incoming messages through a specific channel.

the chathub needs to be added to the signalr middleware:

a signalr methods in the hub are the channel definitions and the handlers at the same time, while node.js socket.io is defining channels and binds an handler to this channel.

the currently used data are still fake data and authentication is not yet implemented. this is why the user's name is not hardcoded yet:

this hub only contains a method addmessage , that gets the actual message as a string. later on we will replace the hard-coded username, with the name of the logged on user. then a new message gets created and also added to the data store via the chatservice . the new message is an object, that contains a unique id, the name of the authenticated user, a create date and the actual message text.

then the message gets sent to the client through the websocket channel "messageadded."

while googling for dependency injection in react, i read a lot about the fact, that di is not needed in react. i was kinda confused. di is everywhere in angular, but it is not necessarily needed in react? there are packages to load, to support di, but i tried to find another way. and, actually, there is another way. in es6 and in typescript it is possible to immediately create an instance of an object and to import this instance everywhere you need it.

inside this class, the websocket ( hubconnection ) client gets created and configured. the transport type needs to be websockets. also, a consolelogger gets added to the client, to send log information to the browser's console. in the last line of the constructor, i start the connection and add an error handler, that writes to the console. the instance of the connections is stored in a private variable inside the class. right after the class i create an instance and export the instance. this way the instance can be imported in any class:

to keep the chat component and the users component clean, i created additional service classes for each the components. this service classes encapsulated the calls to the web api endpoints and the usage of the websocketservice . please have a look into the github repository to see the complete services.

the websocketservice contains three methods. one is to handle incoming messages when a user logged on the chat:

this is not yet used. i need to add the authentication first.

the other two methods are to send a chat message to the server and to handle incoming chat messages:

in the chat component, i pass a handler method to the chatservice and the service passes the handler to the websocketservice. the handler then gets called every time a message comes in:

in this case, the passed-in handler is only an anonymous method, a lambda expression, that calls the actual handler method defined in the component. i need to pass a local variable with the current instance of the chat component to the handleonsocket method because this is not available after when the handler is called. it is called outside of the context where it is defined.

the handler than loads the existing messages from the components state, adds the new message, and updates the state:

at the end, i need to scroll to the latest message and to focus the text field again.

the usersservice.ts and the chatservice.ts both contain a method to fetch the data from the web api. as preconfigured in the asp.net core react project, i am using isomorphic-fetch to call the web api:

the handler then updates the state with the new list of chatmessages and scrolls the chat area down to the latest message:

now it is time to try it out. f5 starts the application and opens the configured browser: 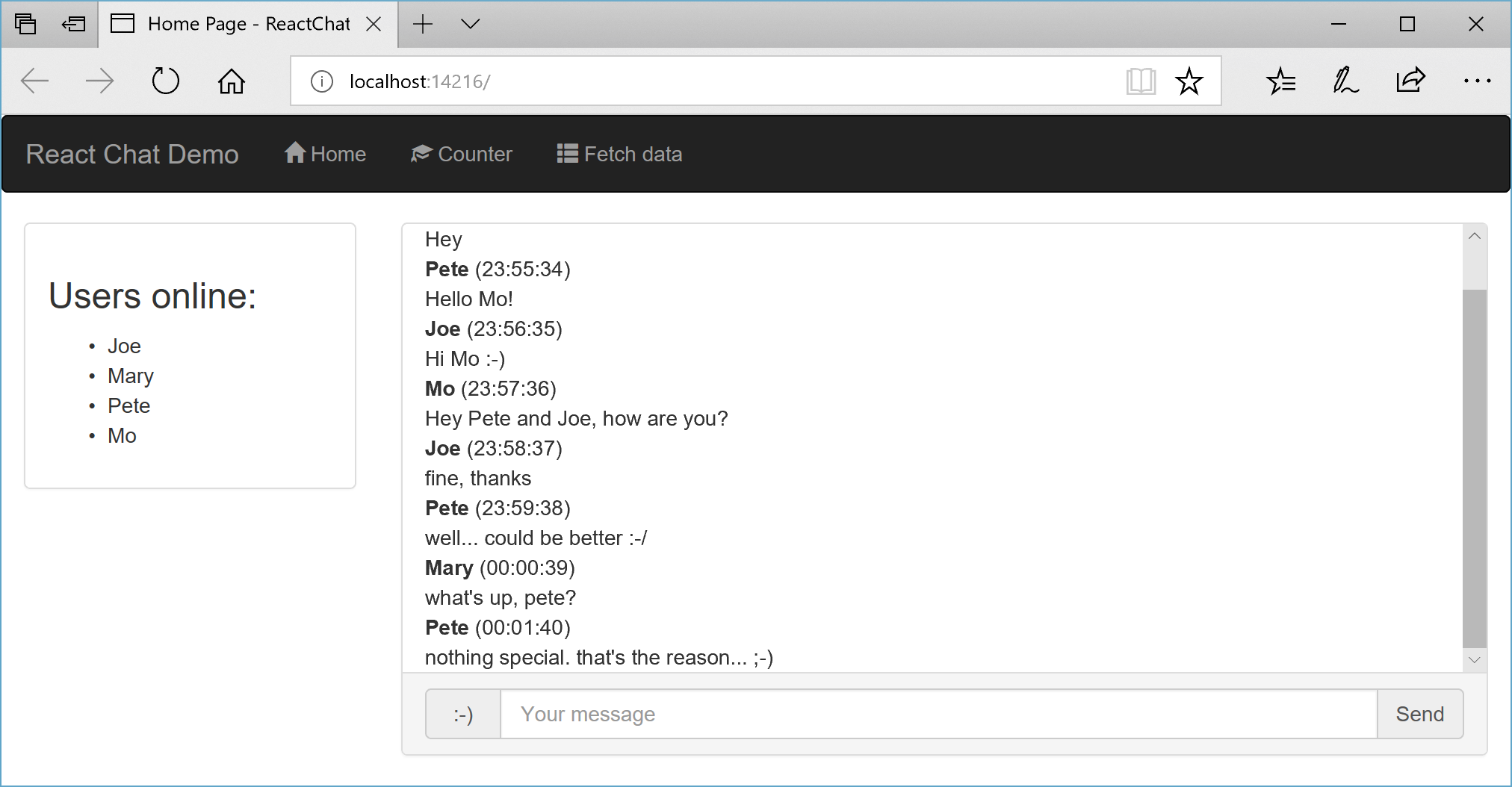 this is almost the same view as in the last post about ui. to be sure react is working, i had a look into the network tap in the browser developer tools: 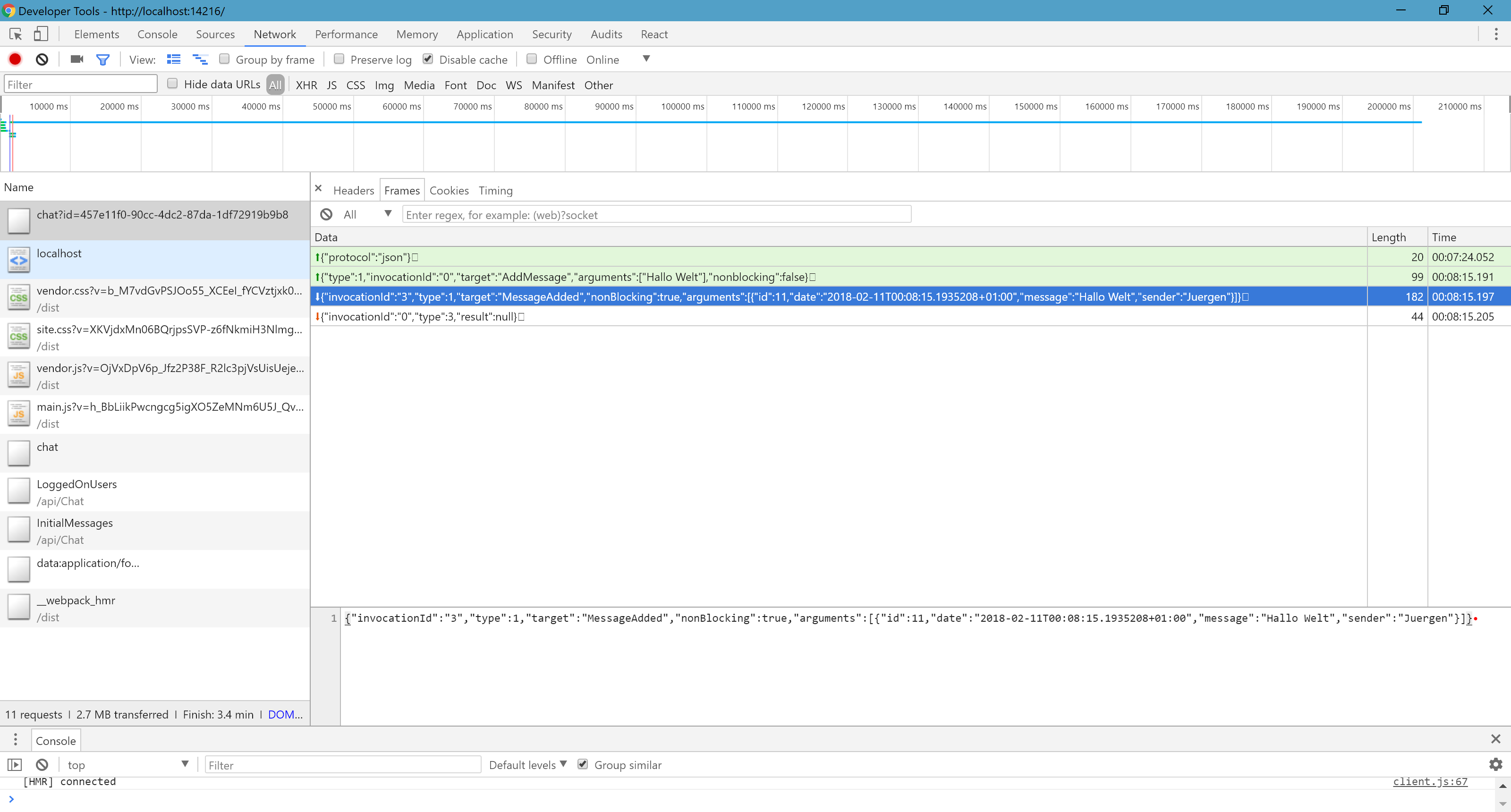 here it is. here you can see the message history of the web socket endpoint. the second line displays the message sent to the server, and the third line is the answer from the server containing the chatmessage object.

this post was less easy than the posts before. not the technical part, but i refactored the client part a little bit to keep the react component as simple as possible. for the functional components, i used regular typescript files and not the tsx files. this worked great.

in the next post, i'm going to add authorization to get the logged on user and to authorize the chat to logged-on users only. i'll also add a permanent storage for the chat message.