You probably already know what Docker is and how it works. Hence, we won’t get into details about it. This blog will cover the Top 12 Docker Security Best Practices that you need to consider when using the Docker platform.

Why Do You Need to Secure Your Dockerfile, Containers?

Containerization has taken the world by storm due to its flexibility in the way applications can be deployed anywhere. However, this also introduces some security vulnerabilities. Docker and Docker Containers make it very easy to build, share and deploy your applications, making it very difficult to find, detect, report, and fix security issues after the deployment.  Much of this overhead can be prevented and minimized by shifting the security left. Therefore, it is crucial to secure everything from Dockerfile to a Docker Container in order to have Docker Container Security in place.

1. Keep Docker Host and Docker Engine Up to Date Along With Your Docker Images

Docker containers run on the Docker engine available on host machines. These host machines could be Linux/Mac or Windows. The Docker Engine can be one of the available versions. It is vital to use the latest, stable version, which updates the known issues from the previous releases. The same applies to the host Operating System.

It is important to have updates or patches in place as every patch solves vulnerabilities like CVE-2021-41092. This particular patch fixed the bug due to which the credentials used to login docker registry from the CLI were being sent to `registry-1.docker.io` rather than the intended private registry; this used to happen due to misconfigured configuration file (typically `~/.docker/config.json`) listing a `credsStore` or `credHelpers.

Refer to the following screenshot to understand the release cycle of Ubuntu OS.

Dockerfile contains instructions used to create Docker Images. COPY, RUN, ADD, CMD, ENTRYPOINT, etc. These are a few of the command instructions that may be part of the Dockerfile. We can also use ENV and ARGS to set variables at run time or build time, depending on the requirement. You can use environment variables within the Docker containers using ENV or ARGS instructions. While setting up environment variables, you should make a note that one should never assign secrets, credentials, passwords, etc., to variables in Dockerfile or should not hardcode in any command. Consider this as one of the Dockerfile security best practices, as ignoring it can lead to potential security threats and can cost you a lot.

E.g., If you hardcode the password or connection details of your databases in the Dockerfile, assign them to environment variables, and upload the Dockerfile to a public repository, anyone with access to the repository could get those credentials and can access details or connect to the databases.

The image registry is where Docker images are stored. It can be private or public. Docker Hub is the official cloud-based registry of Docker for Docker images, and it is the default registry when you install it. If you do not configure any registry, the images are pulled from this public repository.

When you pull Docker images from any public registry, be aware of the source, as you might not know who built them, how they were built, or whether they are trustworthy or not. Whenever you pull an image from an untrusted publisher, do not forget to verify the source registry and the Dockerfile used to build the image. Also, the base image for your Dockerfile, i.e., the FROM instruction.

While writing a Dockerfile for applications that need files to be copied from your local machine to Docker Image, you should be aware of the content being copied using the COPY instruction. You may have files on your local machine that may contain confidential data or secrets. So, if these files get copied into the Docker Image, anyone with access to the container can get those files from within the container. Hence, it is very important to copy only the files needed in the container rather than copying everything, as shown in the following instruction, to improve Docker Container Security.

You can give it a try to .dockerignor.It can help exclude files and directories that match patterns and avoid unnecessarily sending large or sensitive files to images using ADD or COPY.

E.g., In the following COPY instruction, all the files from the current location will get copied in the Docker Image. So, you should always avoid “COPY . ./” and should explicitly specify the file names in the COPY instruction as “COPY package.json ./”

Scanning images is the process of identifying known security vulnerabilities in your Docker images so that you can fix them before pushing them to Docker Hub or any other registry.

You can now run Snyk vulnerability scans directly from the Docker Desktop CLI as Snyk and Docker have partnered together.

E.g.
You can get a detailed report about a Docker image by providing the Dockerfile used to create the image.

6. Use Fixed Tags for Immutability

In Docker, images have tags on them. The most common and the default tag for Docker images is “latest.” So, if you do not assign a tag to your image, it will have the “latest” tag to it by default. One can publish multiple images with the same tag, i.e., Docker image tags are not immutable. Hence, it is very important to –

10. Run Containers as a Non-Root User

As per the “2021 Container Security and Usage Report” by sysdig.com, the majority of images are overly permissive, with 58% of containers running as root. This is not considered a Dockerfile best practice; one should avoid doing this as there are very few instances where you would really need to run your process in the container using a root user. To make sure that you don’t use a root user, always specify a “USER” instruction with the user name.

Using a non-root user in the Docker containers ensures to mitigate potential vulnerabilities in the container runtime and achieves Docker Container Security.

E.g.
Always try to create and use a non-root user to run your application processes in the container. The non-root user you need may not exist; hence you first will have to create one before using it.

Many artifacts are created throughout the Dockerfile build process that is only necessary during build time. These packages are required for compilation or dependencies for running unit tests, temporary files, secrets, etc. Keeping these artifacts in the base image increases the size of the Docker image, which might slow down download time and expand the attack surface because more packages are loaded, as a result, being one of the reasons Docker supports multi-stage builds. This feature allows you to use numerous temporary images in the build process while only maintaining the most recent image and the data you copied into it.

As a result, you have two images:

In this way, you can adopt multi-stage builds to build your Docker Images that can reduce the size of the images and avoid installing unwanted libraries that increase the chance of a potential security risk.

12. Use Docker Images That Are Up to Date

As new security vulnerabilities are found regularly, keeping up-to-date on security patches is a general Docker Security Best Practice. So, it is important to use frequently updated base images and build your own on top of them. There’s no need to always go to the most recent version, which may contain breaking changes, but you should have a versioning strategy. Following are a few of the points to consider w.r.t your base images.

We all know that “prevention is better than cure” and the same applies in the case of Docker. One cannot simply ignore its security as that can lead to a huge disaster. We now know why Docker Container Security is vital and why it has to be in place. Shifting security left is essential for improving your Docker Environment and reducing the management overhead.

Secure your Docker Container with a highly experienced team. 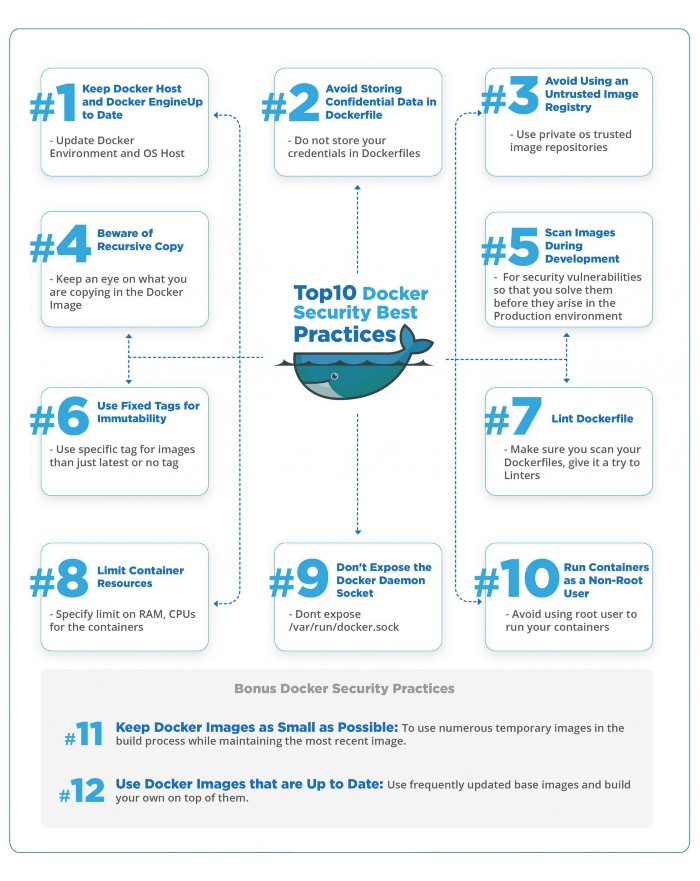