In this article, excerpted from the OCA Java SE 8 Programmer I Certification Guide, I will cover executable Java applications. 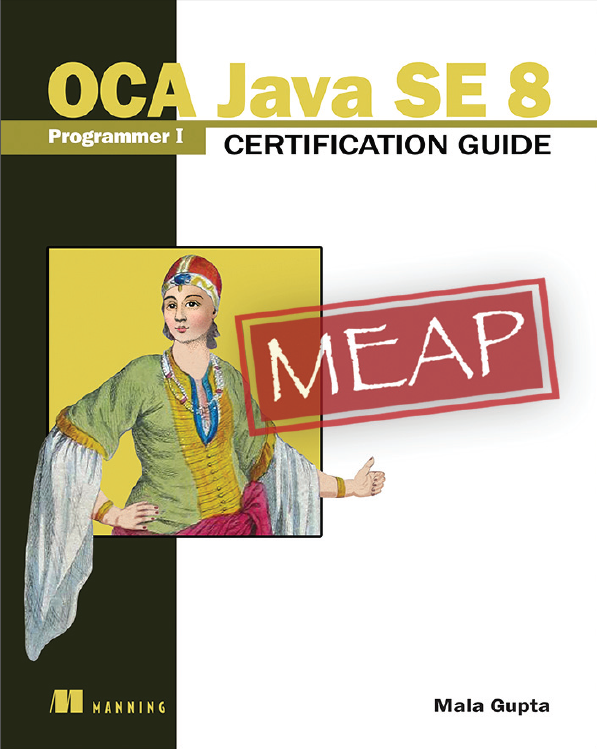 The OCA Java SE 8 Programmer I exam requires that you understand the meaning of an executable Java application, and its requirements; that is, what makes a regular Java class an executable Java class. Even though you might be using an Integerated Development Environment (IDE), like Eclipse, to write and execute your Java code, you need to know how to execute a Java program from the command line for the exam.

“Doesn’t the Java Virtual Machine execute all the Java classes when they are used? If so, what is a nonexecutable Java class?”

An executable Java class is a class which, when handed over to the JVM, starts its execution at a particular point in the class — the main method, defined in the class. The JVM starts executing the code that is defined in the main method. You cannot hand over a nonexecutable Java class to the JVM and ask it to start executing the class. In this case, the JVM won’t know how to execute it because no entry point is marked, for the JVM, in a nonexecutable class.

Typically, an application consists of a number of classes and interfaces that are defined in multiple Java source code files. Of all these files, a programmer designates one of the classes as an executable class. The programmer can define the steps that the JVM should execute as soon as it launches the application. For example, a programmer can define an executable Java class that includes code to display the appropriate GUI window to a user and to open a database connection.

In figure 1, the classes Window, UserData, ServerConnection, and UserPreferences don’t define a main method. Class LaunchApplication defines a main method and is an executable class.

The first requirement in creating an executable Java application is to create a class with a method whose signature (name and method arguments) match the main method, defined as follows:

This main method should comply with the following rules:

Figure 2 illustrates the previous code and its related set of rules.

It’s valid to define the method parameter passed to the main method as a variable argument (varargs) of type String:

To define a variable argument variable, the ellipsis (...) must follow the type of the variable and not the variable itself (a mistake made by lot of new programmers):

As mentioned previously, the name of the String array passed to the main method need not be args to qualify it as the correct main method. The following examples are also correct definitions of the main method:

To define an array, the square brackets, [], can follow either the variable name or its type. The following is a correct method declaration of the main method:

It’s interesting to note that the placement of the keywords public and static can be interchanged, which means that the following are both correct method declarations of the main method:

On execution, the code shown in figure 2 outputs the following:

Almost all Java developers work with an IDE. The OCA Java SE 8 Programmer I exam, however, expects you to understand how to execute a Java application, or an executable Java class, using the command prompt.

NOTE: If you need help getting your system set up to compile or execute Java applications using the command prompt, refer to Oracle’s detailed instructions at http://docs.oracle.com/javase/tutorial/getStarted/cupojava/index.html.

Figure 3 – Using a command prompt to execute a Java application

I mentioned how the main method accepts an array of String as the method parameter. But how and where do you pass the array to the main method? Let’s modify the previous code to access and output values from this array:

Execute the class in the preceding code using a command prompt, as shown in figure 4.

Twist in the Tale Exercise

Here’s a ‘Twist in the Tale’ exercise for you based on executable classes. All chapters in this book, include similar exercises. For these exercises, I’ve tried to use modified code from the examples already covered in the chapter. The Twist in the Tale title refers to modified or tweaked code. These exercises will help you understand how even small code modifications can change the behavior of your code. They should also encourage you to carefully examine all of the code in the exam. The reason for these exercises is that in the exam, you may be asked more than one question that seems to require the same answer. But on closer inspection, you’ll realize that the questions differ slightly, and this will change the behavior of the code and the correct answer option!

In this exercise, and in the rest of the book, you’ll see the names Shreya, Harry, Paul, and Selvan, who are hypothetical programmers also studying for this certification exam. In the book, answer to these exercises is provided in the appendix. For this exercise, I have included the answer, at the end of the article.

One of the programmers, Harry, executed a program that gave the output “java one”. Now he’s trying to figure out which of the following classes outputs these results. Given that he executed the class using the command java EJava java one one, can you help him figure out the correct option(s)?

Purpose: This exercise encourages you to execute the code in the options to understand the correct method signature of the method main together with the method parameters that are passed to it.

Explanation: All the options in this question are supposed to execute using the command javaEJava java one one. The purpose of each of these terms is as follows:

Term 2: EJava—Name of class to execute.

Term 3: java—Passed as the first argument to the method main.

Term 4: one—Passed as the second argument to main.

Term 5: one—Passed as the third argument to main.

To output “java one”, the main method should output the first and either the second or third method parameters passed to it.

Option (c) is incorrect because this main method accepts a two-dimensional array. Hence, it won’t be treated as the main method.

I wish Good Luck to you with your exam preparation and hope you earn it with flying colors!