This article introduces FLoM, a free and open-source software project that provides a tool for local and distributed process synchronization. FLoM provides both a command line utility and a client library. The command line utility is intended for the system engineer, while the client library allows the system programmer to integrate FLoM with its own custom software.

FLoM provides a rich and flexible semantic that simplify the implementation of complex synchronization scenarios. Last but not least, the software implements an event-driven communication protocol to provide good scalability characteristics.

FLoM is a free and open-source software licensed under the terms of the GNU Public License and can be freely downloaded from GitHub and from SourceForge. Process synchronization is discouraged in the implementation of scalable systems as explained in The Reactive Manifesto, but for many daily tasks, it’s helpful.

Sometimes, it is used to reduce the complexity of an algorithm. Assuming that some data cannot be concurrently accessed simplifies code development and test. Other times, process synchronization cannot be avoided because it’s necessary to guarantee the logical correctness of an algorithm.

In the event that you decide to implement some process synchronization, FLoM will be an easy-to-use and flexible solution. FLoM provides two fully integrated tools: a command line utility and a client library available for 5 different languages: C, C++, Java, PHP, and Python.

The command line utility is designed for the system engineer that needs an easy tool to synchronize shell commands and shell scripts. Typical use cases are avoiding the concurrent execution of two conflicting shell scripts, limiting the maximum number of shell scripts concurrently executed, assigning different processing directories to different shell scripts and so on.

The client library exposes a straightforward API that allows the system programmer and the software developer to synchronize some program portions. Typical use cases are avoiding to read a file while another program is writing to it, obtaining a unique identifier or a unique timestamp while many concurrent programs are doing the same, distributing a set of items to distinct programs without conflicts and so on.

A distinctive feature of FLoM is the full integration between the command line utility and the multi-language client library. As an example, with FLoM you can synchronize a backup shell script, a batch Java program and a PHP web application.

All the above can be transparently used in completely different deployment environments: inside a single system or across a network of interconnected systems using the TCP/IP protocol. The support of IPv4, IPv6, and TLS/SSL allows a wide range of network deployments: LAN, MAN, WAN, and Internet.

FLoM implements a client/server architecture; the client is a light piece of code that sends requests and wants answers from the server. All the synchronization logic is managed by the server. 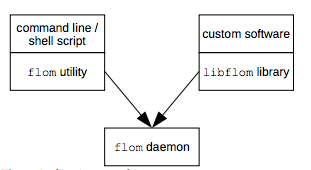 All the components shown in Figure 1 can live in a single Linux system or in a distributed environment: the only requirement that must be met is network connectivity.

FLoM is designed with the aim of reducing the complexity. In the easiest scenarios, you don’t have to explicitly start a flom daemon because it’s automatically activated by the flom utility if necessary. The behavior can be described with this simple algorithm:

Daemon “auto start” is a feature that can be easily disabled by the system engineer that wants to explicitly activate the flom daemon. As shown in section “Persistency and consistency”, disabling “auto start” can be very useful for some use cases.

libflom is a C library that provides a compact and easy to use API that can be used to synchronize custom developed programs using the FLoM model. Together with libflom for C, FLoM provides four further language bindings for: C++, Java, PHP and Python.

Software developed by the customer and linked to the libflom library cannot use flom daemon “autostart” feature and the flom daemon must be explicitly activated using the flom utility.

C++ and Java are truly object-oriented programming languages, but the FLoM programming model is strictly based on the C native interface even for these languages. Nevertheless, integrating your own custom software with FLoM is really simple and straightforward.

The basic usage requires only one “object” of type flom_handle_t and four functions:

All the configuration options can be retrieved using a flom_handle_get_something function.

PHP and Python languages use a similar, C-like syntax:

The basic usage requires only 1 object of class FlomHandle and  methods:

The synchronization model implemented by FLoM is based on the concepts of resource and lock.

The resource is the abstraction introduced by FLoM to support process synchronization: two or more processes synchronize themselves specifying the same resource and an operation (“lock,” “unlock”).

FLoM extensively uses the concept of resource to model process synchronization: the client, without distinction between flom utility and libflom library, asks to the server (flom daemon) to lock a specific resource.

The diagram in Figure 2 shows two processes that exclusively lock the resource “/foo/bar”. 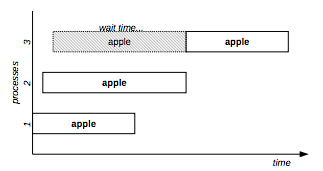 FLoM provides different type of resources to support a wide range of use cases: “simple,” “numeric,” “set,” “hierarchical,” “sequence,” and “timestamp.” As explained in the next paragraphs, some resource types support only a subset of the lock modes described in Table 1.

The type of a resource is automatically inferred from its name: there’s no need to specify the type with an attribute. The syntax of resource names is based on regular expressions.

Simple resources are probably the easiest and most common resources to use; they supports all the lock modes.

Example: command1 and command2 can be synchronized to exclusively use resource R1 with these commands:

To specify protected read lock mode for command2, use this command line:

To reproduce the scenario depicted in Figure 3, use these commands:

Numeric resources are useful to model synchronization processes related to multiple producers and/or multiple consumers; numeric resources can be used to implement workload capping. The only supported lock mode is “exclusive”.

Example: to allow a maximum number of 2 concurrent executions of command, use a numeric resource as below:

Independently from the number of different command lines, as shown in Figure 4, a maximum number of 2 command will be concurrently executed. 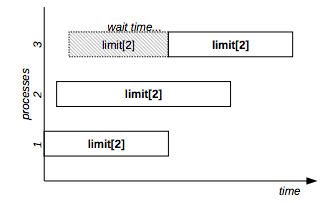 Resource sets can be used to model synchronization processes with a finite set of distinct resources that must be assigned to the requesters: every requester can lock only one resource at a time. This type can be used to implement a simple round robin scheduler. The only supported lock mode is “exclusive”.

Produce the same result of these ones: 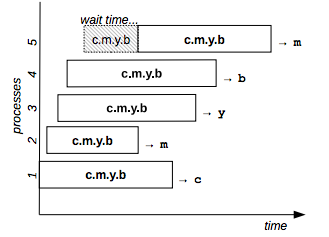 Figure 5 shows an example with a resource set of 4 elements: the fifth process has to wait the completion of the second process and gets the same resource: “m.”

Figure 7 shows the behavior of a sequence resource that allows the concurrent execution of 4 distinct processes: the fifth requester has to wait for the completion of the second one because no free slots are available. 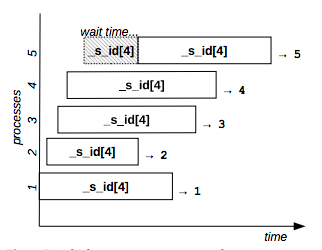 Figure 8 shows the behavior of a transactional sequence resource that allows the concurrent execution of 4 distinct processes: the second requester crashes and its unique id (value=2) is recycled and passed to the fifth requester. 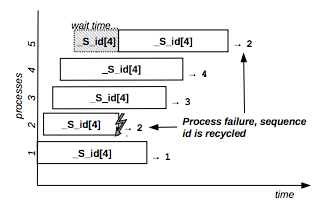 Timestamp resources inherit a characteristic from numeric resources: a limited number of requesters can obtain a different unique timestamp at the same time. The only supported lock mode is “exclusive”.

Figure 9 shows the behavior of a timestamp resource that allows the concurrent execution of 3 distinct processes. 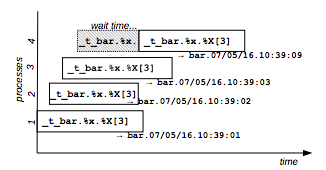 FLoM implements a multiple layer configuration: an option configured in a higher layer overrides the values configured in the lower layers.

Figure 10a shows the configuration layers available for the flom utility (both client and daemon). 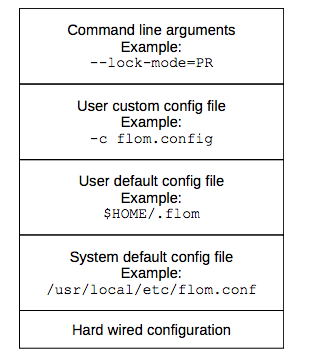 Figure 10b shows the configuration layers available for libflom library: 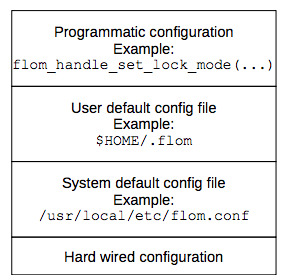 The name of the resource that must be used can be specified in a configuration file using the “Name” key inside the “Resource” section:

Using the flom utility, the resource name can be configured using the command line arguments:

Using the libflom library, the resource name can be configured using the setter method:

A detailed description of FLoM internals is outside the scope of this introductory paper, but some information is useful to deploy the technology in the best way.

The FLoM daemon is a multi-threaded process with one listener thread and a distinct thread for every resource (Hierarchical resources need just one thread for each distinct root).

The usage of a dedicated thread for each resource could be considered a waste of computing resources, but it carries three main benefits:

All the communications between the FLoM client and the FLoM daemon use a custom, non-blocking, XML-based, message passing protocol.

The FLoM daemon does not manage persistent data: everything is kept in memory (RAM).

The lack of long-term persistence could be considered a limit, but under the assumption that lock state is ephemeral, a memory-only design carries at least two benefits:

Every distributed system has to face the constraints described by the CAP theorem, and FLoM is no exception. One of the most serious consistency issues related to the FLoM technology is related to network partition: under some circumstances, two different, but equivalent FLoM daemons could be activated inside a network of distributed systems.

Figure 11a shows a possible distributed initial state with one server (daemon) and three clients nodes.

Figure 11a: Example of a distributed system before a network partitioning event

Figure 11b shows the result of a network partition if the daemon implicit auto start feature is disabled: the two clients in the right side of the network disconnects from the server and errors are raised.

Figure 11b: The clients in the right side of the network cannot connect to the server and raise an error

Figure 11c shows the result of a network partition if daemon auto start and auto discovery features are enabled: in the right side of the network a second daemon can be started. This event can potentially be an inconsistency issue because the two network partitions evolve without coordination: sometimes this is the desired behavior, sometimes this is a dangerous behavior. 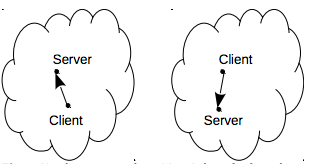 The FLoM project supports IPv6 that can be used, in conjunction with SSL/TLS security, to deploy in the wild: Internet connected devices can communicate in a secure way without auxiliary security like a protected VPN.

The usage of UDP/IP multicast, both IPv4 and IPv6, provides to FLoM a useful auto discovery feature that can be used for cloud deployment: FloM daemon can be activated on systems with dynamic IP addressing.

The FLoM project distributes a complete set of tests along with the source code. The automatic test set is based on the GNU autotool suite: it’s used to perform full regression testing after every release and to certify the supported platforms.

FLoM is a software developed for the Linux operating system: it’s tested and supported for both Ubuntu and CentOS.

The author is not aware of a competing tool. Tools designed for the shell environment like lockrun [7], halockrun [8] and getlock [9] use an auxiliary file to manage the locking part of the synchronization process: the design choice limits the usage to the local system or requires the usage of a shared NFS volume to host a lock file shared among many systems. All the tools provides only a command line interface: an API is not available.

This brief paper describes the basic characteristics of an open source and free software project that provides synchronization tools for:

Leveraging the resource concept, FLoM can be used to implement both trivial and complex synchronization use cases among shell commands (scripts) and custom programs.

The performance, scalability and security features provided by FLoM enable a wide range of different deployments from a single system to a complex network of geographically interconnected systems.

Glossary of The Reactive manifesto

A printer friendly version of this paper is available here.