This post continues the Part 1. We build a simplified but robust and scalable Qiwi-like payment network. The network allows its users to transfer money between the network accounts. To satisfy the functional requirements from Part 1, we use microservice architecture with 1 microservice for every domain object. Specifically, we use Spring Boot and Spring Cloud for the system to be scalable and robust. Also, we use the Axon framework to conveniently utilize the CQRS and Event Sourcing patterns. Finally, we use a Neo4j graph database, alongside a Postgres database, to efficiently audit suspicious money transfers between "related" accounts.

This post is organized as follows. First, I describe the system and its parts. Second, I describe how to implement the account and transfer microservices. Finally, I describe e2e test scenarios to verify if the system works as intended.

The component diagram of our system is depicted in Fig 1. The fully workable code can be found here; the code is based on the Udemy course of Sergey Kargopolov.

In this post, we don't concern with Spring Cloud security. A reader, who is interested in security, may consult, for example, this post, where an in-depth exposition of OAuth2 and two-factor authorization is given. Here we assume the users are already authorized. Let's see what is what in Fig 1.

Fig 1. The component diagram of our payment network.

According to Part 1, there are 2 domain microservices: Account and Transfer ones. The Transfer service transfers money between accounts; the Account service maintains the accounts. The Eureka discovery service (DS) assigns different ports to the instances of the Account and Transfer services. The Spring Cloud gateway (G) receives the deployment addresses of the services. The user interacts with the system via G.

This system is robust and scalable. Indeed, DS just as well assigns new ports (one per service) even to multiple instances of the same domain service.  Then, DS reports the addresses to G; G routes and load balances the incoming requests. If one of the domain services is down, DS recognizes this fact and notifies G so that no requests are sent to the failed service instance.

As it is pointed out in Part 1, we don't explicitly create a User microservice, since we assumed a user may have no more than 1 account, and the user is assumed to be authorized. The only non-credential field of the User domain is his/her "relatives". This information is included in the Account Read Model (see Part 1 to refresh on the definitions).  Before we see how our services are implemented, let's review the Axon framework annotations.

Axon framework provides tools to construct CQRS and ES systems. Here is a brief summary of these tools. For more details, see the documentation.

Finally, here is a tool to update the Read model on an event emitted by an aggregate. In the Axon framework, such handlers are located in public classes annotated with @Component ; these components usually access database repositories.  Every public void event handler is annotated with @EventHandler ; inside these handlers, Read models get updated.

In the Axon framework, every aggregate and saga have their information stored in some tables. For example, the Account microservice stores Read model and auxiliary tables in its database:

Here the accounts and accountlookup are Read model tables. The former stores the current accounts, the latter stores only the accounts' Ids to notify the user if there exists such an account.   saga_entry, token_entry, association_value_entry are auxiliary Axon tables to maintain the saga state for every saga step. The token_entry table is needed to know on what saga step to continue to execute the saga if the Account microservice first went down and then started up. To develop the application faster, we need to automatically clean up these tables before every e2e test scenario. Let's see how the Account service is implemented.

According to the CQRS and ES patterns from Part 1, we split the Account service into 2 parts: the Read and Write models (Fig 2). 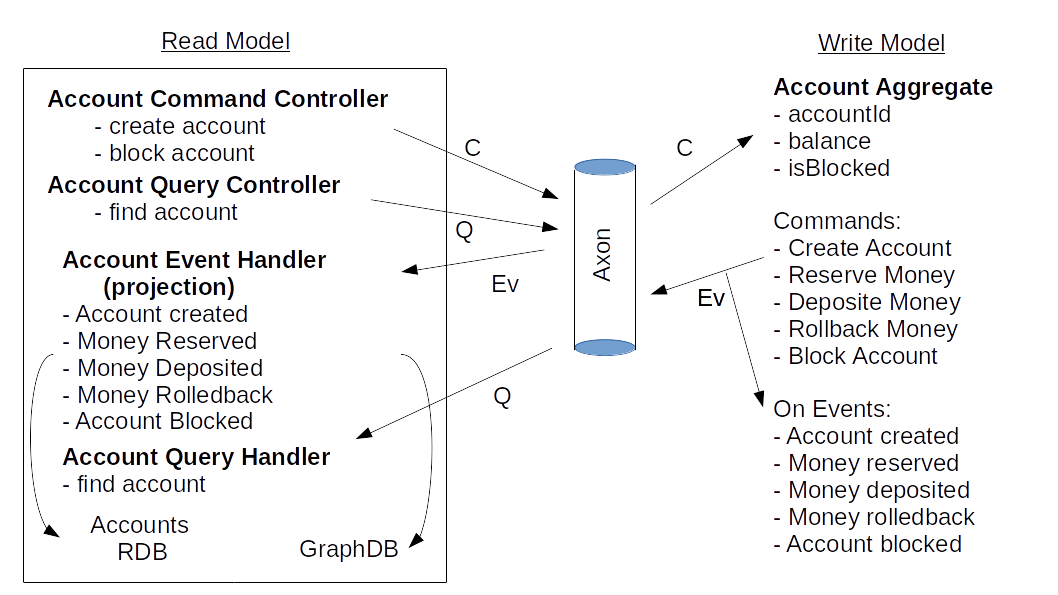 The persistent part of the Read model in Account service is as follows. All accounts are stored in the accounts table in RDBa; the table columns match the Account aggregate fields, plus (auto) created and updated LocalDateTime fields, annotated with @CreationTimestamp and @UpdateTimestamp accordingly. Also, there is an accountlookup table in RDBa that stores only accountIds; this is needed for us to check if the account with a specified accountId exists. Finally, there is a GraphDB, where the Account service persists only the account nodes and only with accountIds. The GraphDB is shared between the Account and the Transaction services.

The Write model is the Account aggregate. The aggregate's fields are specified by the system's domain model. In this case, the fields are self-explanatory: accountId (a string), balance (a BigDecimal), isBlocked (a boolean). Notice that Axon stores all the events with their timestamps, so there is no need for us to have a dedicated timestamp field in the aggregate.

The Account aggregate receives commands and emits events; also the aggregate handles its own events and updates its own state. The commands can be deduced from the functional requirements from Part 1. The CreateAccount command is needed to create a new account; the command's arguments specify the initial account balance. If the account is created successfully, the system returns a random UUID accountId.

ReserveMoney and Deposite money commands are needed to transfer money from one account to another. The former command has the amount to transfer and the accountFromId as the command's arguments. The latter command has the amount to transfer and the accountToId as the command's arguments. These 2 commands also have a transactionId field.  The field is used when money is transferred by a transaction from an account to an account.  How these commands work in successful and failed transfer scenarios is described later in this post.

A RollbackMoney command is called if the receiving account goes down or is blocked. The command's arguments are the accountId and the amount of money. The command does the same as the DepositeMoney command. How this command works in scenarios is described later in the post.

Also, the Block account command blocks an account. The command has an accountId as its argument. Money can be transferred neither from no to a blocked account.

Finally, the Account microservice contains endpoints to clean the auxiliary tables described above (see the code). These endpoints are easy to use in e2e tests. Let's see how the transaction service is implemented.

The main CQRS and Event Sourcing elements of the Transaction microservice are shown in Fig 3. 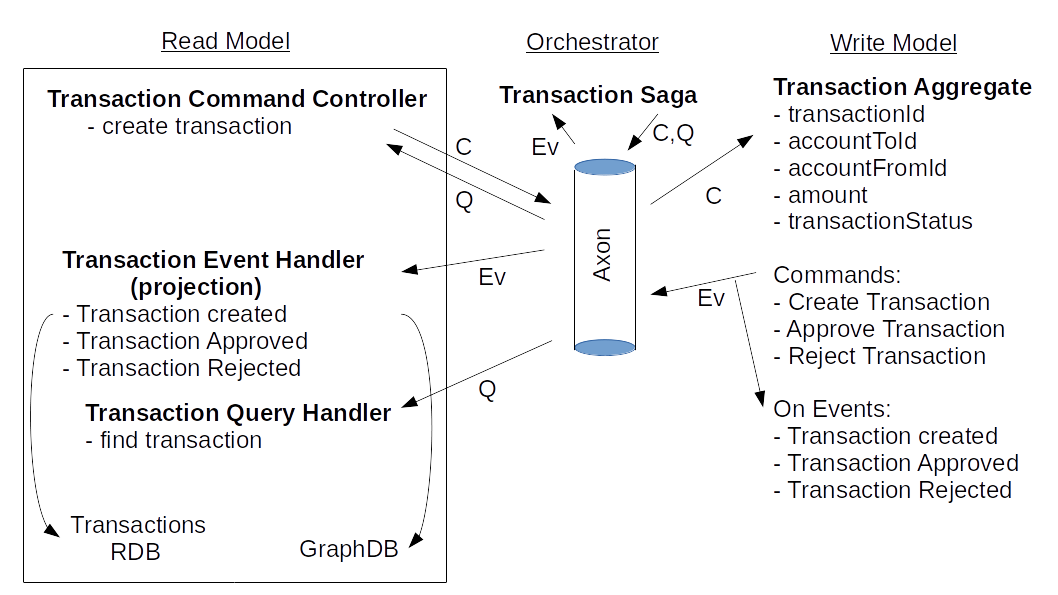 Fig 3. The component diagram of the Transaction service. The C, Q, Ev, and the arrows mean the same as in Fig 2.

Note on How To Use a Graph Database in Microservice Systems

Let's try to persist an accountFrom-transaction->accountTo relation in Neo4j. Neo4j provides an Object Graph Mapping (OGM) functionality to Spring Data. To do this by means of  the OGM, we need to present the related GDB nodes, for example, the following way (similarly to how we do this in an RDB and ORM):

However, in a microservice architecture, it is problematic to use this approach since the nodes should know too much about each other: a Transaction should know not just the accountTo and accountFrom Ids, but also about the whole accountTo and accountFrom  classes. To make the domain elements as little coupled as possible, we should make sure that a Transaction knows only the account Ids.

To implement this accountFrom-transaction->accountTo relation in Spring Data, let's do the following:

Also notice that as of now (version 4.4), Neo4j GDB does not allow bidirectional relations between its nodes. So, for every 2 related accounts, we have to create 2 relations, like an "uncle" and a "nephew".

Finally, let's see how to detect these kinds of "transaction-relation" cycles in Neo4j. 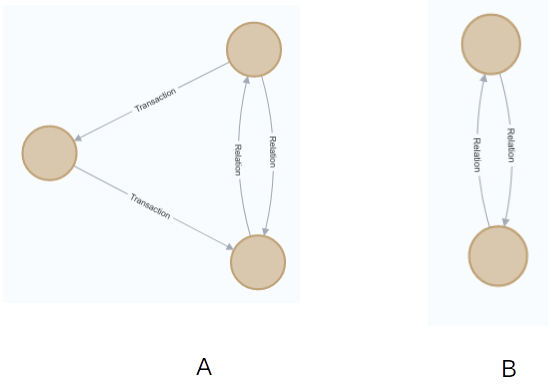 The Cypher query correctly detects the cycle. Let's see how all these work dynamically. 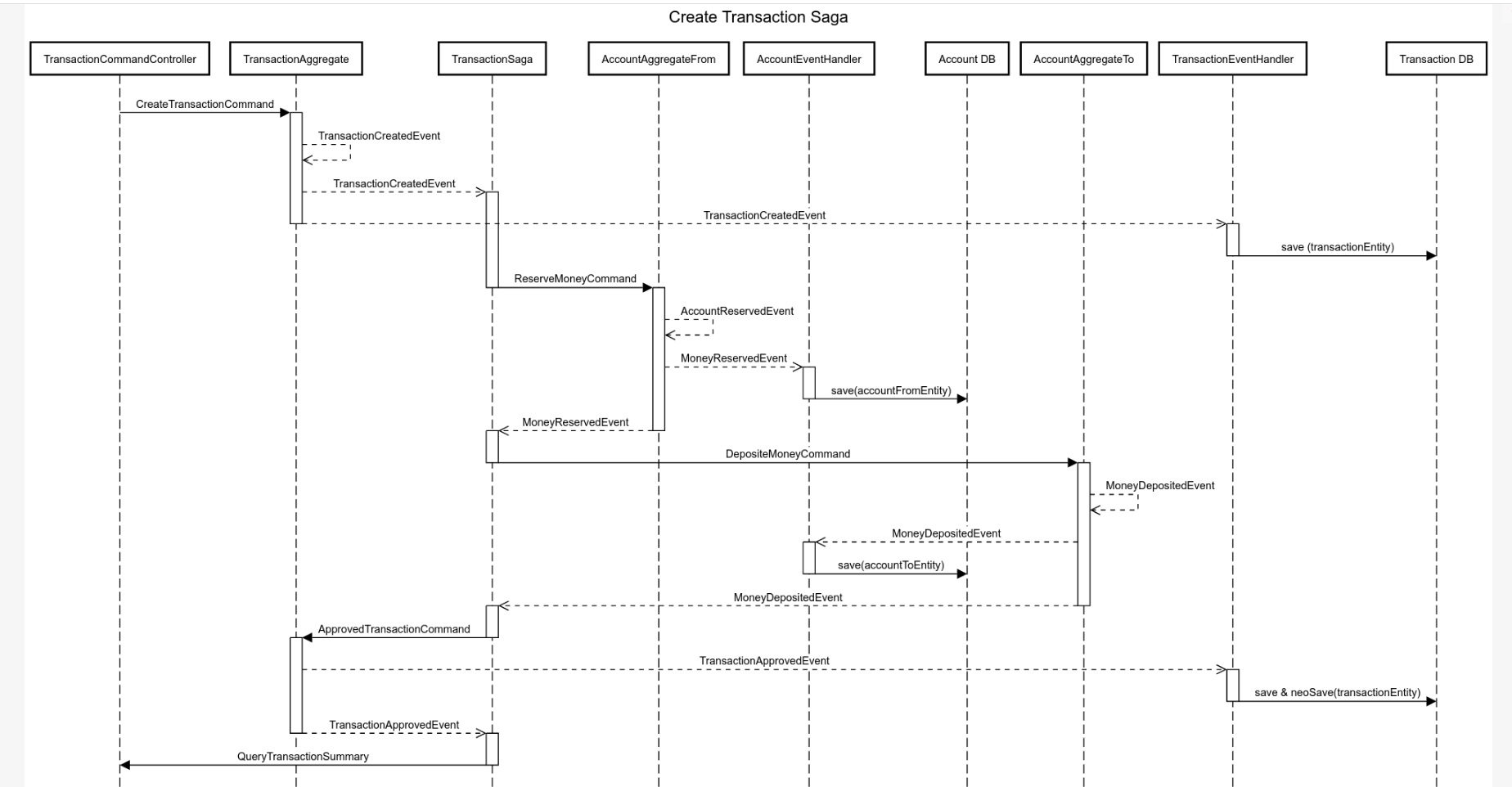 Assumptions: 1) there are two accounts, accountFrom and accountTo, 2) the former account has enough money deposited, 3) both accounts are not blocked.

Next, the saga issues a ReserveMoneyCommand to the accountFrom aggregate. The aggregate checks if the account is not blocked and has enough money. Then, if positive, the aggregate reduces its balance appropriately and issues a MoneyReservedEvent. The AccountEventHandler handles the event and updates the accountFrom Read model.

As the saga gets the MoneyReservedEvent , the saga issues a DepositeMoneyCommand to the accountTo aggregate. The aggregate increases its balance appropriately and issues a MoneyDepositedEvent. The AccountEventHandler handles the event and updates the aggregateTo read model.

The scenario goes as the first one, except the AccountFrom Aggregate checks its balance to be insufficient and throws an exception:

Once the saga catches the exception, the saga issues a RejectTransactionCommand: 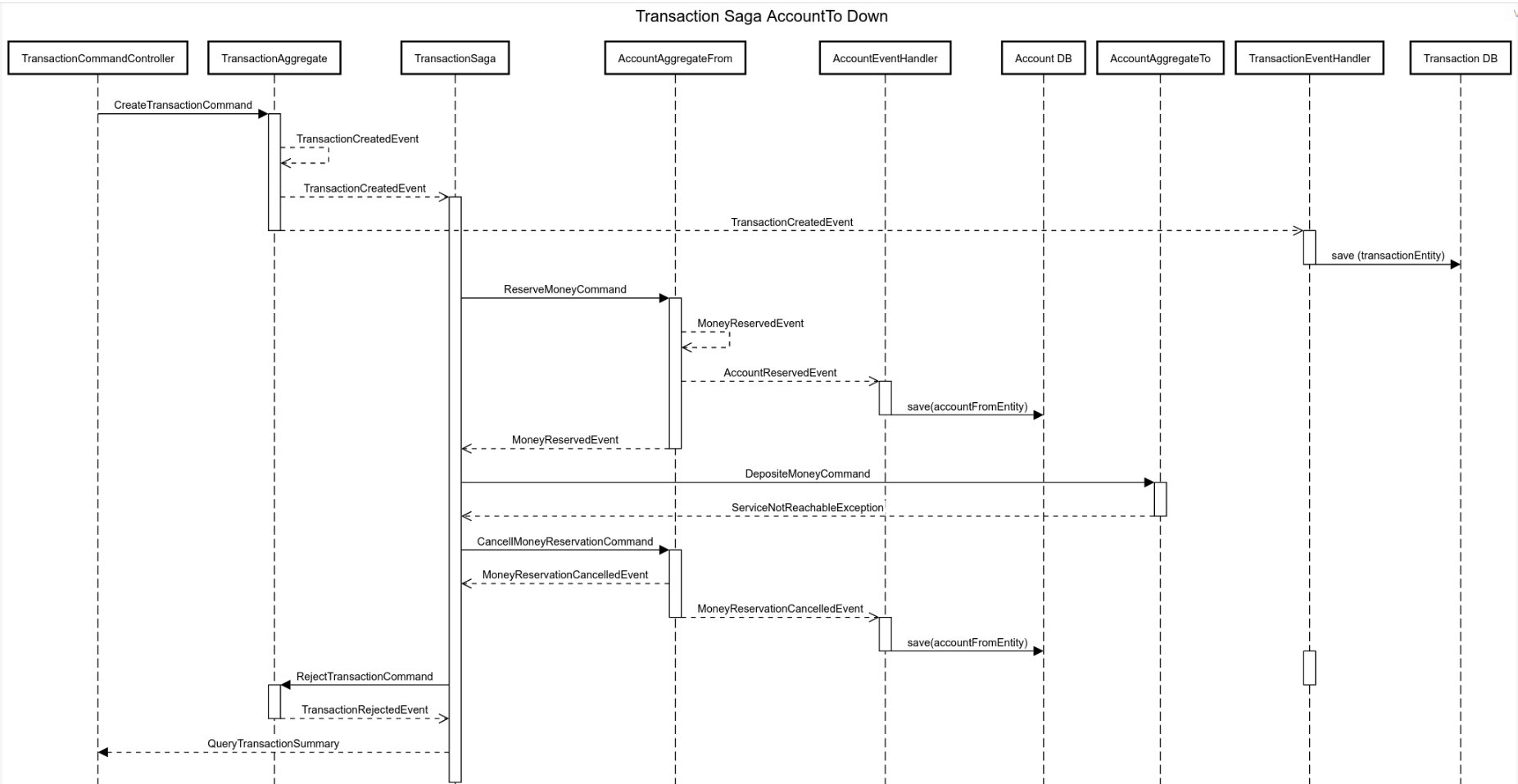 In this case, after a DepositeMoneyCommand was sent to the accountTo, the system throws either a ServiceNotReachableException or an IllegalArgumentException("account is blocked"). The saga catches the exception and initiates a compensation transaction:

The accountFrom aggregate receives the command, emits a MoneyRolledBack event, restores the aggregate's balance to the pre-transaction value. The saga handles the event and issues a RejectTransactionCommand. After that, it goes as in the previous scenario. Let's see how to automatically test all these.

Our test scenarios consist of the following elementary e2e tests (see the HTTP folder in the code for details):

4. Transfer an amount of money from the first to the second account. If there is no overdraft, the accounts are not blocked, the account and transfer services work as expected, and we get a TransactionStatus.ACCEPTED message. Please check other scenarios in the postman folder.

5. Retrieve the accounts balances and verify that the amount is transferred.

These steps can be easily automated with Postman (or similar) software. Please check the instruction on how to install and run the app.

In this post, I demonstrated how to implement a simple distributed payment network system with enhanced audit functionality by means of Axon, Spring Boot, Spring Cloud, Neo4j, Postgres. Also, I pointed out how to use a Graph DB for a microservice system and how flexible it becomes to use a GraphDB in a CQRS system. Finally, I described how successful and unsuccessful transaction scenarios work.