Git users, particularly the new Git users, are often easily confused by the differences between:

In this article, I will explain each of them in details with specific examples.

1- Local branch can split into two types of branches: non-tracking local branch and local tracking branch. You can view your local branches by running command git branch, and you will get the output as below:

The output shows that there only two local branches, "feature" and "master", on my laptop.

1.1- Non-tracking local branches are standalone branches that are not associated with any other branches, you can create a non-tracking branch by running  git branch newBranchName
as shown below to create a new branch called “new branch”.

From this command’s output, you can see that the local branch "master" is tracking the remote-tracking branch "origin/master", and the local branch “feature” and “new branch” are not tracking anything, just sitting there alone. You can run the command
git branch --track localbranch branch-To-track
to create one local tracking branch where "localbranch" is your local branch, and "branch-to-track" is the branch you want to associate with (to track). The effect of this command is that it creates a new branch and in the meantime the new branch tracks a branch “branch-to-track”.

From this output of command, you can see that the “feature” branch starts tracking the “origin/master”.

1.3 - Remote tracking branches are references (points) to the state of branches (remote branches) in your remote machines (repos). They are local branches that you can not move; you can update your remote-track branches using git fetch. The remote branch has the form of (remote)/(branch). For instance, we have seen in the previous the "origin/master".
you can view a list of all the remote-tracking branches on your machine by running git branch -r:

You can push the newly-created local branch myNewBranch to origin by running git push -u origin myNewBranch. Now other users can track it. For example, we push the “feature” branch to the remote server as below shown: 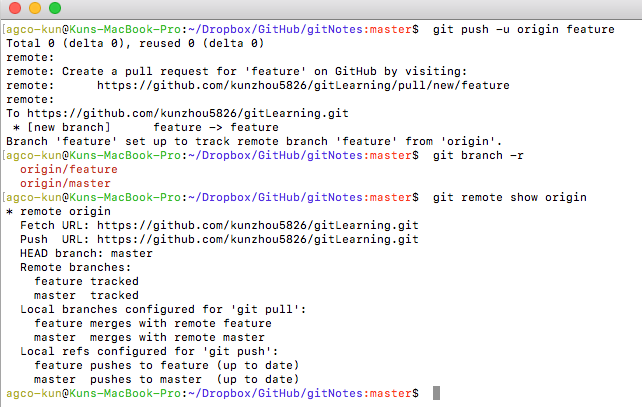