The Git directory on every machine is a full repository which has full version tracking capabilities and independent of network access. You can maintain branches, perform merges, and continue with development even when you are not connected to the network. For me, having a full repository on my machine and ease of use (creating a branch, merging branches, and maintaining branching workflows) are the biggest advantages of Git. It is a free and open-source software distributed under the terms of the GNU.

I will try to cover two common strategies that can be used to support software development in two articles. In this article, I will cover the single release development Git strategy. A software team working on one release at a time usually uses this strategy.

A software team working on one release at a time follows the following steps. I will try to add the git command/git UI steps to perform each step. The following diagram shows the strategy details: 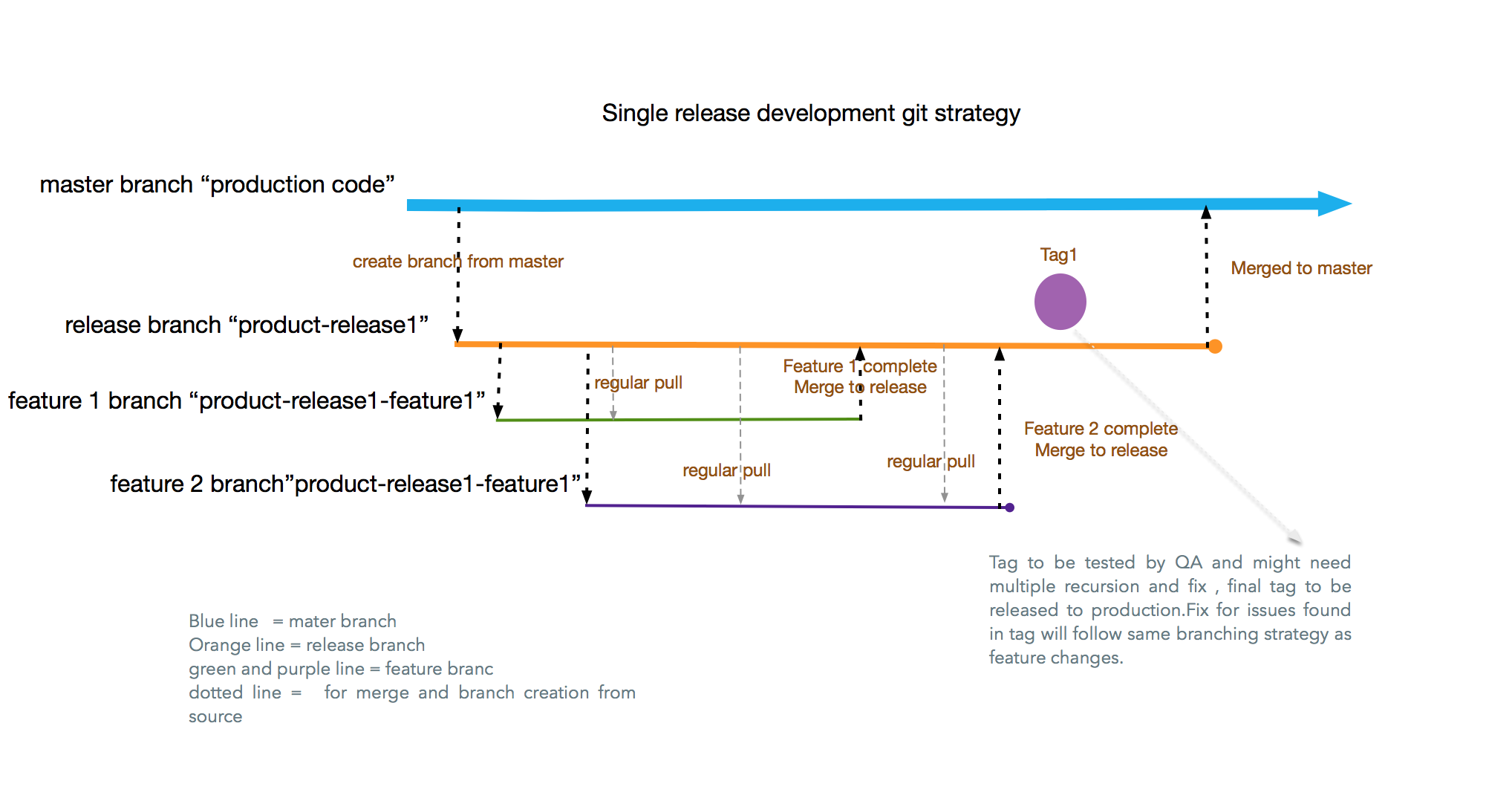 Create a release branch from the production code branch “master.”

The master has production code and “product-release1” is the new release branch.

Each dev member creates a feature branch from the release branch and works on feature development in that branch.

Each dev member has to work on the feature branch “product-release1-feature1.”

Everyone should take the latest updates from the release branch daily using the merge or rebase Git commands.

Let's say you are working on “product-release1-feature1” and you have to pull the latest changes form “product-release1.” This will make sure any changes that were moved to the release branch are available in the local feature branch. This also avoids conflicts or duplicate code while merging the feature branch to the release branch at feature completion time.

Note: I would suggest using the merge option till you are very clear with  rebase.

Before doing this step, you should be only on your feature branch. Use the  “git branch” command to verify the branch name before doing a merge.

On completion of a feature, raise a pull request to merge the code to the release branch. This step can be done in the GitHub UI.

You can create and assign pull requests to a reviewer using the git UI. Refer to this link for the steps in the UI.

A code review will be performed on the pull request and changes will be done if needed. If everything is fine, the pull request will be approved by the reviewer. Refer to this link for the steps in the UI.

This should be done in the Git UI.

Upon completion of all features planned in the release, the final tag can be provided to the testing team for validation.

Once testing is complete, a software production release will be done from the final QA approved tag.

Any post-production release fix can be done in a tag. Remember to move the code to the master and post any production fix release.

Create the next release branch from the master, as the master has the production code, and follow the same approach for development as described above.

In this approach, the master branch has the production code and releases are done from a tag. Each dev member can cut a branch from the release branch, work on a feature independently, and upon completion of the feature, can raise a merge pull request and get it approved. While doing development, each dev member should rebase the code from the release branch so that they have the latest code.

This approach works fine for projects where a team is working on a single release at a time. Most teams are working on multiple releases at a time, so they have to maintain more than one release branch active at a time.

Please read the next article for a possible approach to handling projects working on multiple releases in parallel.