Recently I had to integrate with Google Maps API for a job-related task. I had a great experience working with Google Maps API both on the backend and frontend, but it was not without problems and a lot of research. In fact, I did learn a lot and for this very reason, I decided to share some of the most interesting pitfalls that I fell in.

To show you what I learned I assembled a small no-brainer application. It is a Spring Boot/Thymeleaf web application with the mission to display on a map the employees from an organization. It can display a particular employee on the map, all the employees on the map, and during the creation of an employee, it allows picking an address from a pinpoint on a map. The features that I decided to implement are for the sake of tutorial purposes and they may not make a lot of sense sometimes. The app can be found here: employee-locator

Disclaimer: I am no JavaScript professional, and I am sure that the code that I am going to present to you may be refactored/implemented in a more elegant manner than I did and for that I am sorry.

Okay so let’s get started.

Basically, what you need to do to get started with google maps API is setting up a developer account and for that, you’ll have to set up a billing account. After getting the API key make sure that you enable Geocoding API, Maps JavaScript API, and PlacesAPI.

TIP: Another thing to mention here that I learned the hard way is the restrictions. The Java dependency google-maps-services requires that there is no restriction on the API key for it to work. So from this point, you either leave this key without restrictions, or you can create a key for the web part (restrict it however you want) and one for Java and leave it with no restrictions.

TIP: You’ll need to include the API key in the pages that you are going to use the maps, here are the scripts that I found a must to be included to get the most out of the Maps API for my needs:

TIP: Before getting into the hands-on examples, there is one thing that still has to be mentioned, even if it is out of the scope of this application and the examples that I’m going to give. If you have enabled on your application the Content-Security-Policy header you might need the following lines (on my real project I needed them):

General overview of the domain 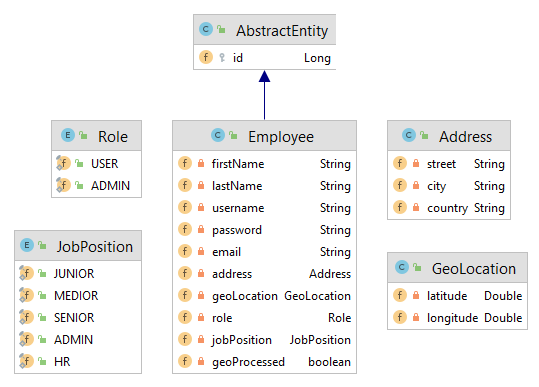 On the backend, almost everything is centered around one entity – the employee. The employee class has some fields describing an actual employee like his name or email. For this tutorial, there is also the address field and the geolocation field.

For the employee entity the I also created the corresponding repository, service, and controller to be able to persist/fetch employees from the database (PostgreSQL) all the way up to the thymeleaf  HTML pages.

Why did I decide to persist the geolocation fields in the database?

TIP: Not sure if this is a tip or not, but from my point of view always calling the Geocoding API/Places API to fetch the coordinates that need to be displayed on the map, in the long run, is going to cost a lot and for this very reason the coordinates are computed on the backed during the fetch time of the employees and before passing them to the controller. Also, there is the geoProcesed field which will ensure that an employee’s address is going to be computed only once. In this manner from the billing point of view mostly we’ll pay just for the displaying of the coordinates via Maps JavaScript API, but not for computing every time.

All the mentioned logic happens in the GeoLocationServiceImpl.

Let’s look at what happens in there.

Firstly (1) you’ll notice the GeoApiContext geoApiContext which is the entry point for calling the Google Geo APIs. The documentation states that

GeoApiContext works best when you create a single GeoApiContext instance or one per API key and reuse it for all your Google Geo API queries. This is because each GeoApiContext manages its own thread pool, back-end client, and other resources.

Now the single instance of the GeoApiContext is guaranteed by the fact that this service is managed by Spring and by default every bean in Spring is a singleton, which plays out kinda nice here.

Next is the creation of GeoApiContext via the builder, which offers many ways of configuring it, but the main thing that you are going to need is the API key which I provided via the .properties file. Also, I configured the max retries of every request to 2 and the connection timeout to 10 seconds. You can configure lots of different things like a proxy if your deployed app runs through a proxy.

Then there is the actual method (2) that computes the coordinates from a String address.

In my case it uses both the GeocodingAPI and PlacesAPI, from the documentation:

Geocoding API - Geocoding is the process of converting addresses (like "1600 Amphitheatre Parkway, Mountain View, CA") into geographic coordinates (like latitude 37.423021 and longitude -122.083739)

PlacesAPI - Performs a text search for places. The Google Places API enables you to get data from the same database used by Google Maps and Google+ Local.

TIP: Usually just invoking the GeocodingApi with its address would suffice if you are dealing with simple addresses, but if you need something more complex like a search by the postal code or some broken/incomplete addresses, even addresses with mistakes I found PlacesAPI + GeocodingAPI to work best.

Basically, the method is performing a text search through more than 100 million businesses and points of interest (from documentation) via the PlacesAPI, it takes the placeId from the first result (which I believe to be the most accurate) and passes it to the GeocodingAPI, to request a GeocodingResult by that placeId. From that point the GeoLocation is being constructed out of the obtained result, in particular, this piece of the code:

A thing to mention here is that the entire google-maps-services suite is just a client wrapping the HTTP requests to the https://maps.googleapis.com

There is also a way to perform the requests asynchronously by setting a callback on the request handling the result and the failure with the .setCallback() method.

Now that we understand where the coordinates are coming from we can move on to the visual stuff. 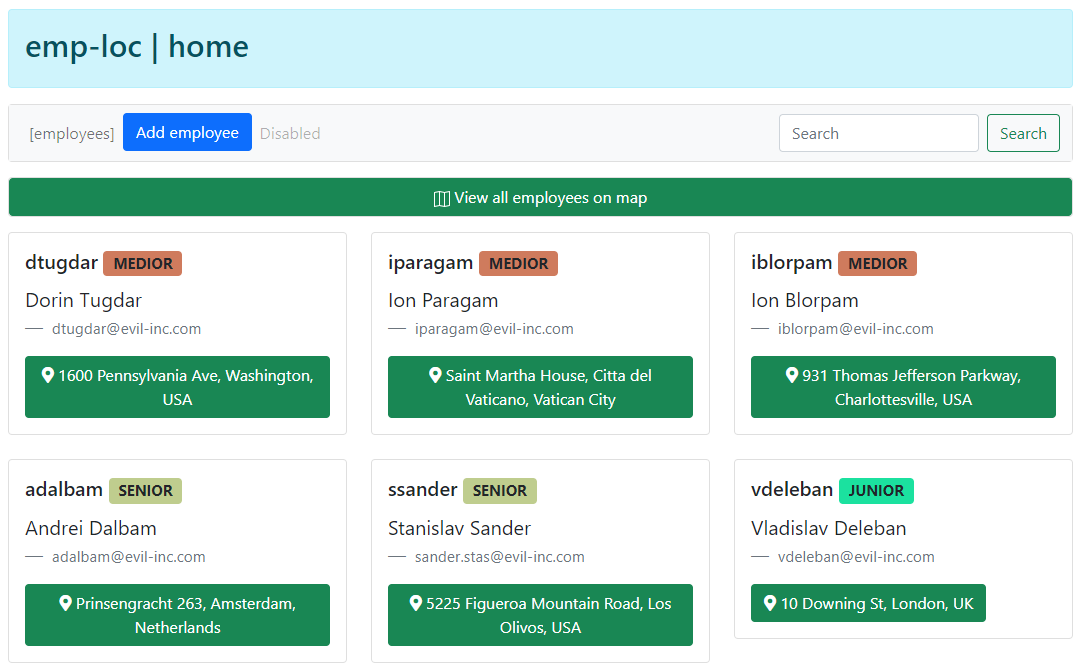 Please excuse my UI/UX skills, the main page is pure HTML with some bootstrap and nothing fancy. It displays all the employees in the system with the ability to view each one of them on the map or all of them at once. Also, there is a button for employee creation/adding.

View an employee on the map

By clicking on the address of an individual employee the following modal will appear. 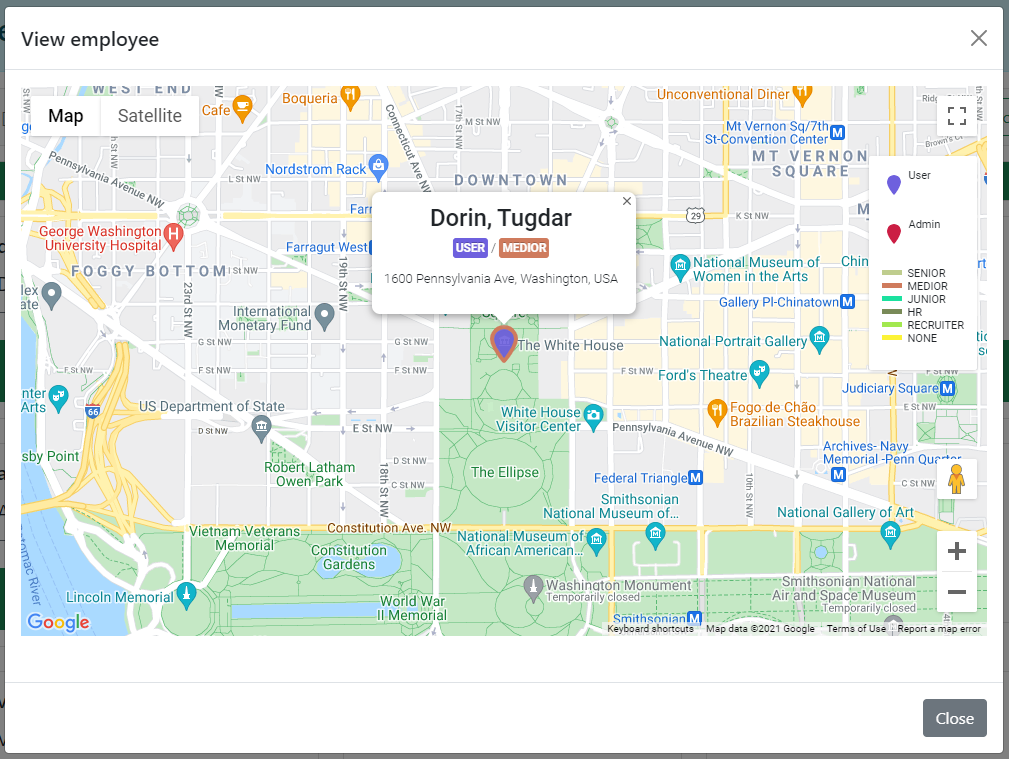 Okay, what is going on here. The first thing to be mentioned is the modal body

Which contains a div with the id employee-map. This div is going to be referenced as the holder of my map with the address marker of the clicked employee. When clicking the address of an individual employee the following JavaScript function will be invoked showIndividualMapModal(element).

Viewing all employees on the map

Viewing all the employees on the map can be viewed also in a modal by clicking the corresponding button which will invoke the showCollectiveMapModal(element).

This function repeats all the steps showIndividualMapModal(element)  is doing, but in a loop for each employee out of an array of employees retrieved via jQuery’s getJson().

The interesting thing to see here is the marker clusterer in action: 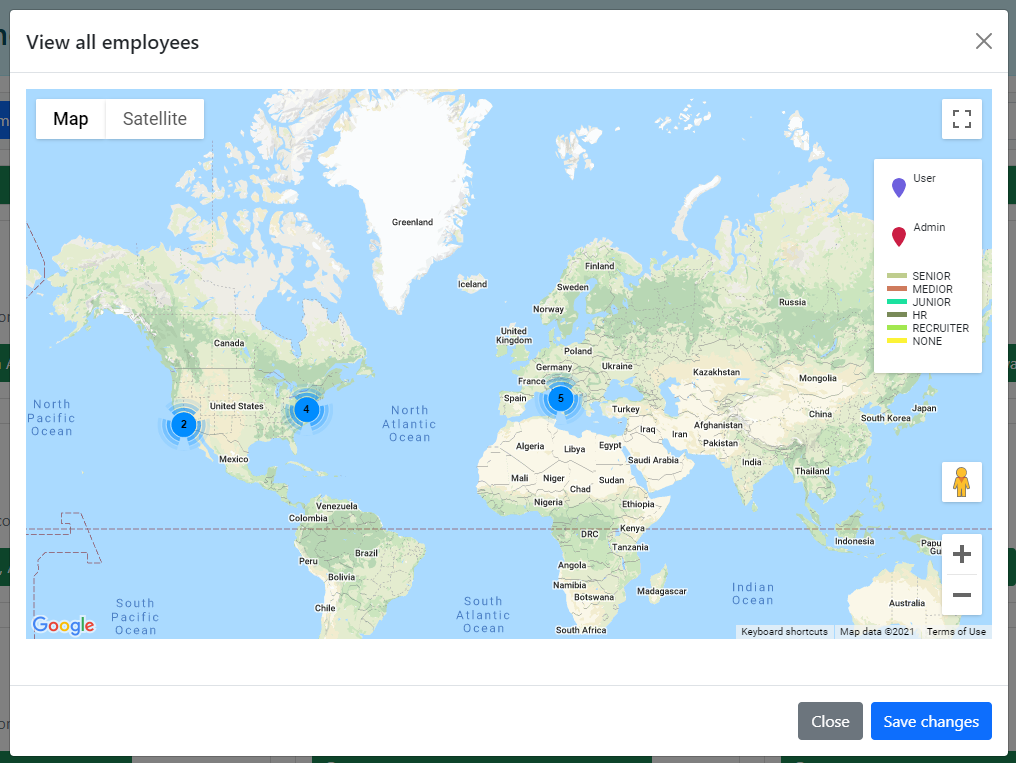 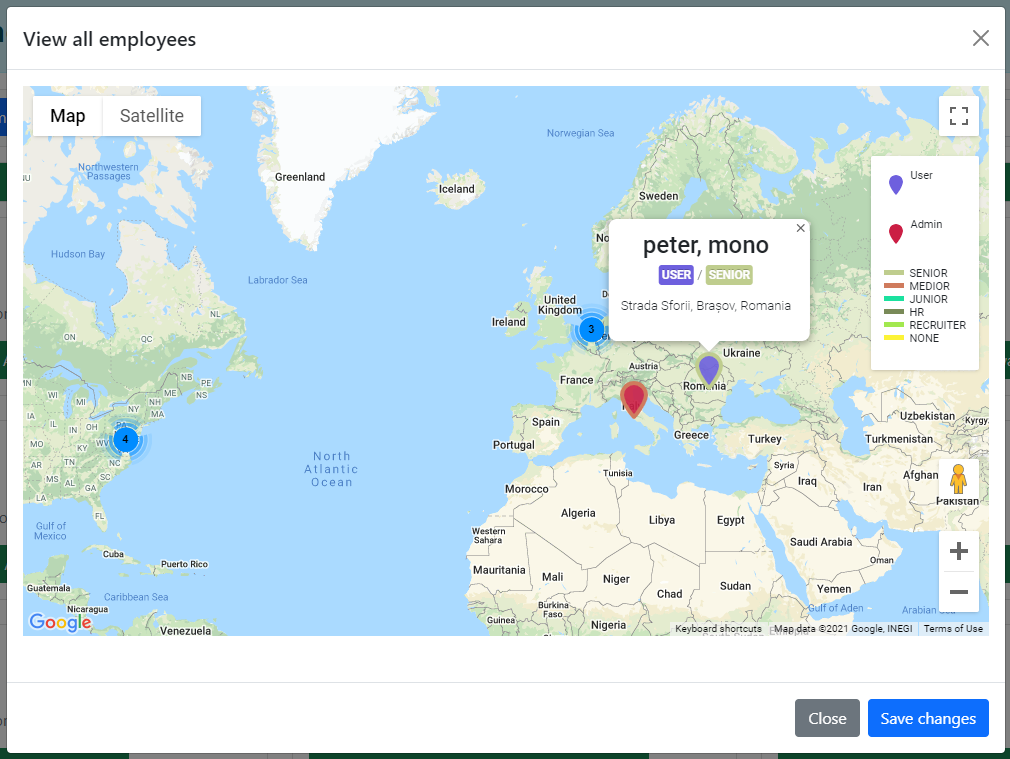 The last feature that I want to show you, as it too has some puzzles, is the creation of the employee. Creation/Adding of an employee does nothing uncommon, except for the fact that it lets the user pick an employee’s address from google maps. 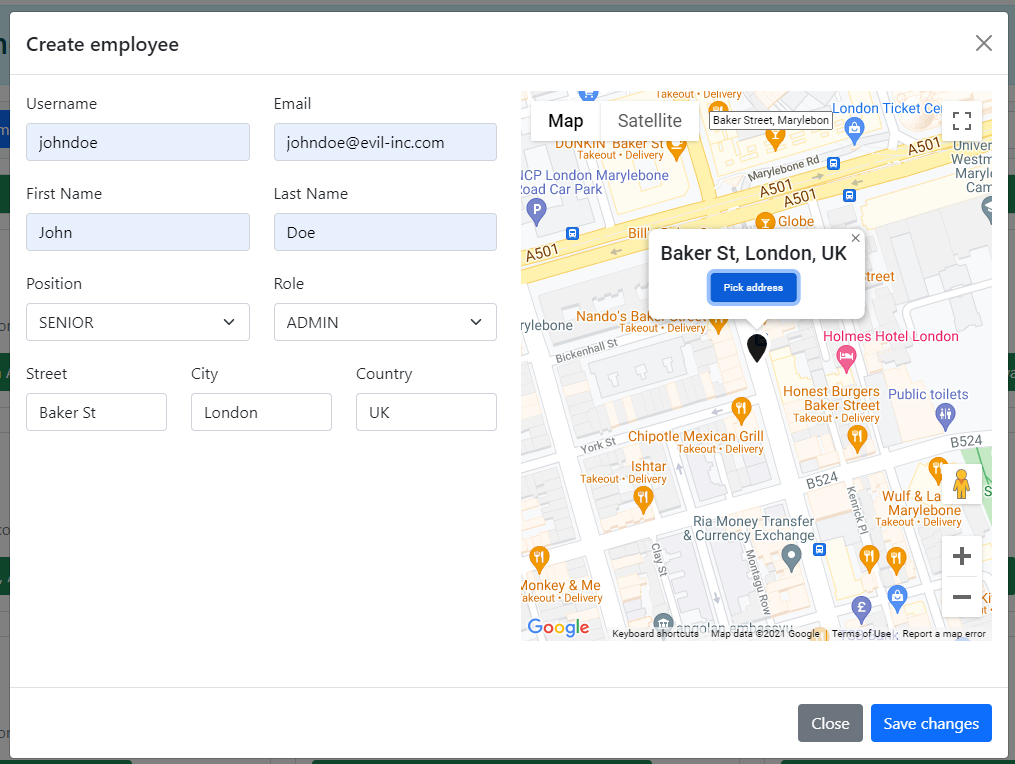 The first thing to notice here is the search box which is providing suggestions for different locations. Another thing is the marker with the info window allowing to pick that address as the employee’s address.

This modal can be triggered by clicking the add employee button which will invoke the initCreateEmployeeMap(element).

I am not going to describe all the lines from this function as it is copy-paste from the official Google Maps API documentation with minor modifications to fit my needs, for example the info window which allows to pick a marker's address and populate with it the address form's fields. What I want to discuss here are some of the pitfalls that you may fall into when dealing with the search box and a modal together.

TIP: Firstly, notice that I created the search box programmatically which will solve the issue of it being unable to be initialized during consecutive triggers of the modal.

TIP: Another thing to pay attention to is this piece of code which I found to solve another modal/search box issue:

The google maps will pick up the previously created input it will add some dynamic CSS to it under the pac-container class which will set the z-index lower than the modal`s z-index and this will result in hidden behind the modal suggestions. The above-mentioned piece of code solves this issue by looking at the created input after it is fully initialized and sets the z-index to 9999 to the pac-container class.

Other than that, everything else is well explained in the documentation

That is it. I want to say that I had a pleasant experience working with the Google Maps API and I want to mention that they did a tremendous job documenting almost everything and providing lots of tutorials. Feel free to check them here: https://developers.google.com/maps/documentation

In case you missed it, the full source code is here: employee-locator

Thank you for your attention and happy coding!