The majority of Spark applications source input data for their execution pipeline from a set of data files (in various formats). To facilitate the reading of data from files, Spark has provided dedicated APIs in the context of both, raw RDDs and Datasets. These APIs abstract the reading process from data files to an input RDD or a Dataset with a definite number of partitions. Users can then perform various transformations/actions on these inputs RDDs/Datasets.

Each of the partitions in an input raw RDD or Dataset is mapped to one or more data files, the mapping is done either on a part of a file or the entire file. During the execution of a Spark Job with an input RDD/Dataset in its pipeline, each of the partition of the input RDD/Dataset is computed by reading the data as per the mapping of partition to the data file(s) The computed partition data is then fed to dependent RDDs/Dataset further into the execution pipeline.

There are more variants of these APIs which includes the facility of specifying various options related to a specific file reading. The full list can be referred to here.

After looking at the APIs for reading data files, here are the config parameters list which affects the number of partitions in the Dataset representing the data in the data files:

Using these config parameters values, a maximum split guideline called as maxSplitBytes is calculated as follows:

where bytesPerCore is calculated as:

After the packing process is over, the number of partitions of the Dataset, for reading the corresponding data files, is obtained. 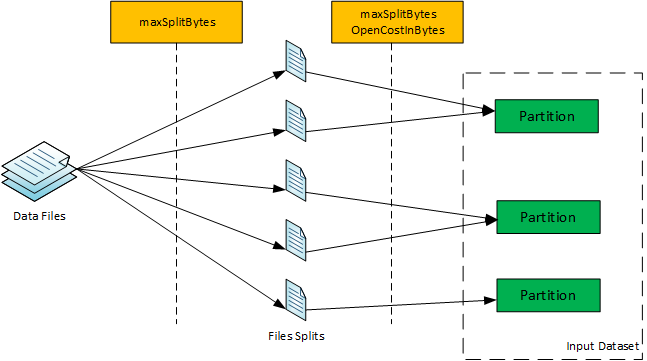 Illustration of the process of deriving the partitions for a set of data files, first the data files are split based on the computed value of maxSplitBytes, then the splits are packed into one or more partitions based on maxSplitBytes and opencostInBytes.

Although the process of arriving at the number of partitions seems to bit complicated, the basic idea is to first split the individual files at the boundary of maxSplitBytes if the file is splittable. After this, the split chunks of files or unsplittable files are packed into a partition such that during packing of chunks into a partition if the partition size exceeds maxSplitBytes, the partition is considered complete for packing and then a new partition is taken for packing. Thus, a certain number of partitions are finally derived out of the packing process.

For illustration, here are some examples of arriving at the number of partitions in the case of Dataset APIs:

(a) 54 parquet files, 65 MB each, all 3 config parameters at default, No. of core equal to 10: The number of partitions for this comes out to be 54. Each file has only one chunk here. It is obvious here that two files cannot be packed in one partition (as the size would exceed ‘maxSplitBytes’, 128 MB after adding the second file) in this example.

(d) 54 parquet files, 40 MB each, maxPartitionBytes set to 88 MB, other two configs at default values., No. of core equal to 10: The number of partitions comes out to be 27 for this case instead of 18 as in (c). This is due to the change in the value of ‘maxPartitionBytes’. The 54 partitions can be easily reasoned based on file split and packing process as explained above.

(e) 54 parquet files, 40 MB each, spark.default.parallelism set to 400, the other two configs at default values, No. of core equal to 10: The number of partitions comes out to be 378 for this case. Again 378 partitions can be easily reasoned based on file split and packing process as explained above.

Following APIs are provided for reading data files into an RDD, each of these APIs is called on the SparkContex of a SparkSession instance:

In some of these API, a parameter ‘minPartitions’ is asked while in others it is not. If it is not asked, the default value is taken as 2 or 1, 1 in the case when default.parallelism is 1. This ‘minPartitions’ is one of the factors in deciding the number of partitions in the RDD returned by these APIs. Other factors are the value of the following Hadoop config parameters:

Based on the values of the three parameters, a split guideline, called split size, is calculated as:

Each of the file chunks (having size greater than zero) is mapped to a single partition. Therefore, the number of partitions in the RDD, returned by RDD APIs on data files, is equal to the number of non-zero file chunks derived from slicing the data files using ‘splitSize’. 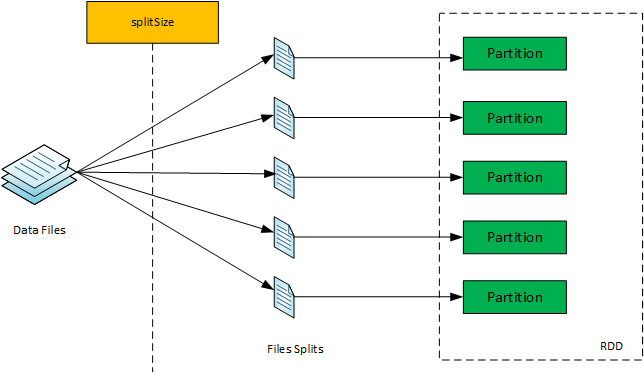 As evident from the ‘splitSize’ calculation, if there is a desire to have Paritions sizes greater than blocksize, then ‘mapred.min.split.size’ needs to be set to a higher number greater than the blocksize. Also, if the desire is to have Partitions sizes less than blocksize, then ‘minPartitions’ should be set at a relatively higher value such that the goalsize (Sum of Files sizes/’minParitions’) computation comes to be lesser than the blocksize.

Until recently, the process of picking up a certain number of partitions against a set of data files, always looked mysterious to me. However, recently, during an optimization routine, I wanted to change the default number of partitions picked by Spark for processing a set of data files, and that is when I started to decode this process comprehensively along with proofs. Hopefully, the description of this decoded process would also help the readers to understand Spark a bit deeper and would enable them to design an efficient and optimized Spark routine.

Please remember, the optimum number of partitions is the key to an efficient and reliable Spark application. In case of feedback or queries on this post, do write in the comments section. I hope you find it useful.

Published at DZone with permission of Ajay Gupta . See the original article here.