Docker is a powerful tool for building, running, and managing distributed applications. It uses the Docker Client and Docker Server to provide a seamless workflow. This makes it easy to run applications using containers, allowing users to set up applications quickly.

Docker can be used across various cloud, desktop, and server platforms. It is available for macOS, Windows, Linux Distributions, Windows Server 2016, AWS, Google Compute Platform, Azure, and IBM Cloud. You can use Docker for your application development without any limitations. However, it is essential to research the architecture of Docker to take full advantage of its features.

This article will help you deeply understand how Docker's client-server model works and give you more insights about the Docker system.

Docker Engine is at the core of the Docker system. When installing Docker on our device, we usually set up two components: the Docker Command Line Interface (CLI) and Docker Daemon. 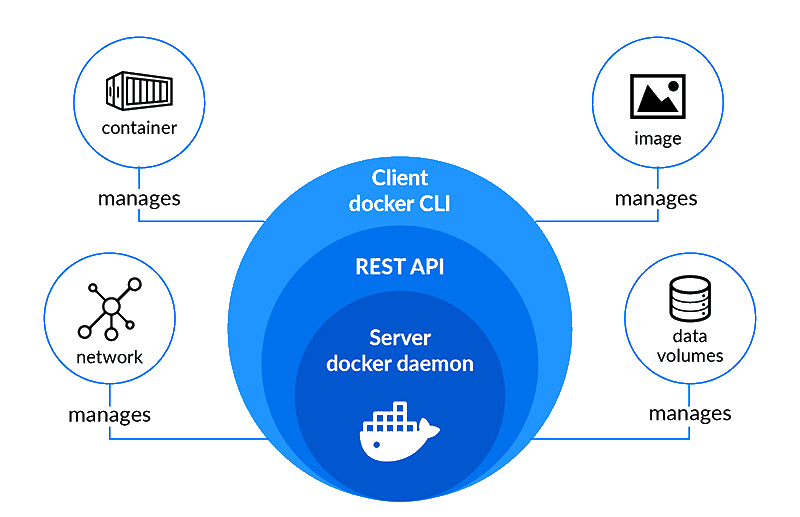 Let's take a look at all the parts that the Docker Engine includes.

The Docker daemon is a service that runs on the Linux operating system and depends on several Linux kernel features. The Docker daemon can also be run on macOS and Windows, although it requires extra setup.

Docker offers an API called the Docker Engine API, which allows users to communicate with the Docker daemon. This RESTful API can be accessed using HTTP clients or most modern programming languages' built-in HTTP library.

Docker CLI is the most commonly used tool. It is the command-line interface used to control the Docker service. The Docker CLI enables you to interact with the system. To do this, we can use the Docker command, which will allow us to send and receive messages from the Docker daemon. The Docker command executes commands, creates images and networks, starts and stops containers, and more.

The Docker system uses a client-server model, with the Docker CLI (Command Line Interface) as the client and the Docker daemon as the server. This architecture makes it easier to scale the system and provides a more secure way of managing applications.

The Docker CLI receives commands, checks to ensure they are correctly formatted, and then turns them into a REST API call. The Docker daemon listens for requests from Docker CLI and processes them according to its configuration. It is responsible for executing commands, processing requests, monitoring how containers run, mounting volumes, starting and stopping containers, and more.

Using the Docker client, you can manage various components of the daemon, such as images, containers, networks, and data volumes. With the official client libraries, you can write applications that interact with the Docker system, giving you greater control and flexibility.

The Docker client and server ultimately work together to simplify developing, deploying, and managing applications. By understanding how the two parts work together, you can better utilize this powerful tool to its full potential.

Docker Client can be run from anywhere, whether it is a laptop running Windows, macOS, or a server running Linux. The client can be installed on any of these systems.

The Docker host is typically a server where the Docker daemon is running. The Docker Server also provides a secure environment for applications and services to run inside containers. It is possible to configure a Docker client to connect with a remote Docker host so users can use Docker on macOS and Windows. In this case, the Docker daemon runs in a virtual machine that uses Linux while the client connects to the remote host. The main idea here is that the client and daemon do not need to be on the same device.

The Docker ecosystem includes the Docker Registry, which is not installed by default. It is a place where you can find and download Docker images, but discussing it in more detail is beyond the scope of this article. However, it would have been strange to omit this part since that would leave arrows pointing from nowhere.

When the Docker client issues commands like run  stop or deploythese commands are sent to the Docker daemon. The daemon is responsible for interpreting these commands and translating them into actions. In response, the daemon sends back an HTTP response with any relevant information.

For example, when you issue a deploy command, the daemon will launch a container and tell the client the IP address of the container. The client can use the provided information to send commands to the container.

In addition to commands issued by the user, Docker clients can also send periodic heartbeats to daemons to ensure they are still alive. For example, if the daemon has not received a heartbeat from a client in a certain amount of time, it will stop any running containers that it was managing for that client.

Docker is a powerful tool that can streamline the process of developing, testing, and deploying applications. It lets you separate your applications from your infrastructure to deliver software quickly.

Understanding how the Docker client and daemon interact is essential for anyone working with Docker containers. As you gain a more profound knowledge of client-server architecture, you can use Docker more effectively to create and manage your applications. With a better understanding of the inner workings of the Docker system, you can also make the most out of your time and resources.