Want to learn how to avoid deadlock in Java? The question of avoiding deadlock is one of the popular Java interview questions, with multi-threading being asked mostly at a senior level interview with lots of follow up questions. Even though the question looks very basic, most of the Java developers get stuck once you start going deeper.

So, what is a deadlock? The answer is simple — when two or more threads are waiting for each other to release the resource they need (lock) and get stuck for infinite time, the situation is called deadlock. It will only happen in the case of multitasking or multi-threading.

How Do you Detect Deadlock in Java?

Though this could have many answers, first, I would look at the code to see if a nested synchronized block is calling a synchronized method from another or if it is trying to get a lock on a different object. If that is the case, there is a good chance of deadlock, if the developer is not careful.

Another way to determine deadlock risks is when you actually get dead-locked while running the application. If this happens, try to take a thread dump, in Linux you can do this by the command "kill -3." This will print the status of all threads in an application log file, and you can see which thread is locked on which object.

You can analyze that thread dump with using tools like fastthread.io, which allows you to upload your thread dump and analyze it.

Another way is to use the jConsole/VisualVM. It will show you exactly which threads are getting locked and on which object.

If you are interested in learning about troubleshooting tools and the process to analyzing your thread dump, I suggest you take a look at this Analyzing Java Thread Dumps course on Pluralsight by Uriah Levy. This is an advanced practice course to learn more about Java thread dump and familiarize you with other popular advanced troubleshooting tools.

Write a Java Program That Will Result in Deadlock

Once you answer the earlier question, they may ask you how to write code that will result in a deadlock in Java.

Here is one way of doing it:

This diagram effectively demonstrates our program, where one thread holds a lock on one object and is waiting for the other object to lock, which is held by the other thread. 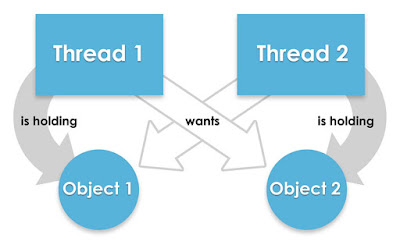 The idea is that you should know the right way to use common concurrent patterns, and if you are not familiar with them then Applying Concurrency and Multi-threading to Common Java Patterns by Jose Paumard is a good starting point to learn.

How to Avoid Deadlock in Java

Now, the interviewer comes to the final part and one of the most important questions, in my opinion: How do you fix a deadlock in code?

If you have looked at the above code carefully, then you may have figured out that the real reason for deadlock is not multiple threads, but it is the way that they are requesting a lock. If you provide an ordered access, then the problem will be resolved.

Here is my fixed version, which avoids deadlock by using a circular wait with no preemption. This is one of the four conditions needed for deadlock.

Multithreading and Parallel Computing in Java

Java Concurrency in Practice - The Book