One of the most important concepts for stream-processing frameworks is the concept of time. There are different concepts of time:

Apache Flink has excellent support for Event time processing, probably the best of the different stream-processing frameworks available. For more information, you can read Notions of Time: Event Time and Processing Time in the official documentation. If you prefer videos, Streaming Concepts and Introduction to Flink - Event Time and Watermarks is a good explanation.

In this article, we’ll take a look at Event time-based pipelines and also to some common problems and misunderstandings working on this type of pipeline.

When we speak about timestamps in Flink, we are referring to a particular field in the event. We can extract it and make it available to Flink, so it knows what’s the actual time from the pipeline perspective. The format expected by Flink is Unix time, specified as milliseconds since the Java epoch of 1970-01-01T00:00:00Z, so we may need to do some type of conversion. To be able to map current time with the event timestamp, Flink expects an implementation of the TimestampAssigner. We’ll see later an example.

Once Flink knows what time it is, it’s the moment to generate a watermark. This is one of the most surprising and genial thinks about working with Flink. A watermark is a special type of event. That means it flows through your job and it’s processed under the hood for each task. This is a clever way to propagate a change through the entire pipeline and it’s used for more things in Flink, like, for example, savepoints.

Generating watermarks is the way to tell the system about progress in event time. To do it, you use a WatermarkGenerator. We’ll see later an example.

Both together, TimestampAssigner and WatermarkGenerator form a WatermarkStrategy which defines how to generate Watermarks in the stream sources.

Let’s illustrate this with an example. Our Flink job will receive readings from different sensors. Every sensor will send measures for each 100ms. We would like to detect when a measure from a particular sensor is missing, for example, because it was off-line.

The job will generate a normal event but the measure value will have a value of -1 when the event is not generated by the sensor or lost in the network.

We’ll have to choose a WatermarkStrategy. We have several options, let’s start with Periodic WatermarkGenerator:

In both cases, the framework periodically invokes the Strategy which generates the watermark. setAutoWatermarkInterval allows us to define that periodicity:

The problem with this approach is that we are mixing processing and event time so the result won’t be deterministic, or even correct depending on the circumstances.

For example, with BoundedOutOfOrdernessStrategyJob, we start defining the watermark interval each 100 ms.

Then we create the DataStream with the watermarks:

To detect missing events, we used a timer so we need a keyed stream and a KeyedProcessFunction:

The TimeoutFunction stores each event in the state and creates a timer for each one. It cancels the timer if the next event arrives on time. If not, onTimer should be invoked and the event in the state identifying the missing sensor is emitted.

Testing and Debugging the First Implementation

Let’s create a simple test: two sensors and one of them misses one of the measures. When we launch the test testBoundedOutOfOrdernessStrategyJob, we obtain the following result:

The job doesn’t detect the missing event, it detects the end of the stream. Why? It’s time to do some debugging. Debugging watermarks issues isn’t easy. There are three options: 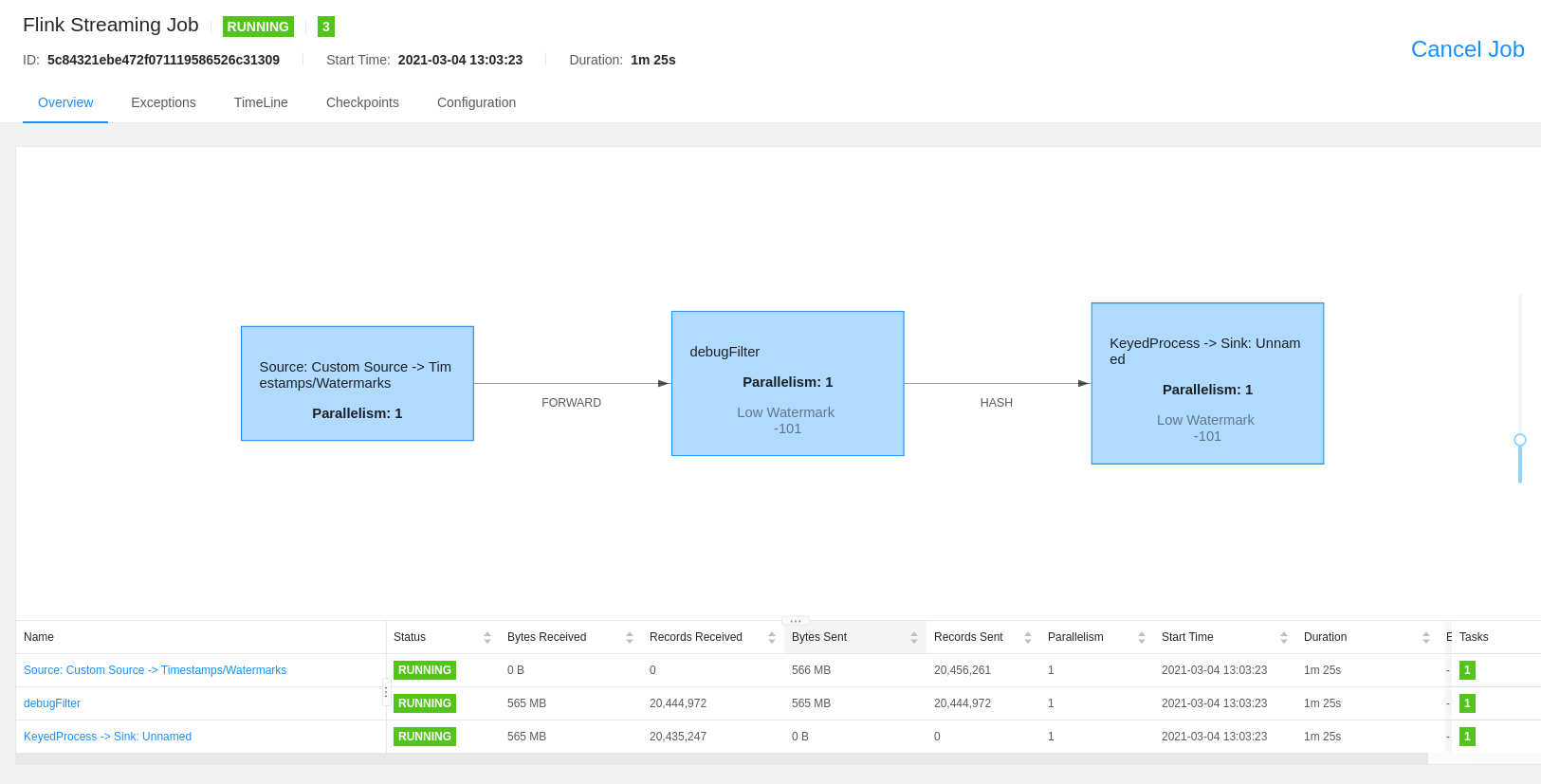 StreamWatermarkDebugFilter is the internal class StreamFilter with some minor modifications:

We apply the new operator to the job:

We can see the watermarks generated executing the test again:

So the Watermark generator isn’t generating a watermark. The only reason I see for that it’s because the job is ending before any watermark is generated. We could set the periodic generation with a smaller value but the problem remains: we are mixing processing and event time so it’s really hard to know how the pipeline is going to proceed in some conditions.

Final Implementation With a Punctuated WatermarkGenerator

We are going to create a generator that will be able to generate watermarks based on the elements of the stream: a Punctuated WatermarkGenerator. So we create a new job CustomStrategyJob:

It’s similar to BoundedOutOfOrdernessWatermarks but we modify the method onEvent to invoke onPeriodicEmit which emits the watermark. So, instead of being invoked by the framework, now it emits a new watermark each time it receives an event.

This seems a lot better, but there is a problem. We don’t have a watermark generated for the sensor 0 at 199. The problem here it’s our stream is keyed, so it’s being processed by two different tasks. Watermarks generations work per task so they don’t advance at the same time. To solve this, the easier way is to set parallelism to 1. Unfortunately, this approach isn’t very efficient.

Relaunching the test, we obtain the expected result:

Summary and Next Steps

Apache Flink is a great framework and it supports Event time in a nice way. The concept of watermarks as events in the pipeline is superb and full of advantages over other frameworks. But it’s also quite complex to understand because:

I wrote this article to contribute to these points. But I have yet some doubts about different points in Event Time so take my conclusions with skepticism and draw your own. If they are different or you would like to share your thoughts, I would appreciate knowing more about it.

There are some resources that helped me a lot and they may help you too:

Source code is on this GitHub repository.

Published at DZone with permission of Anton Rodriguez. See the original article here.