In Scenarios 2a and 2b, we showed different ways of deploying an App Connect flow onto containers on OpenShift – via the command line, and via the dashboard. We eventually saw a response from our deployed integration, but so what! We haven’t yet really seen what Kubernetes is bringing to the table. We will now explore some of the things that Kubernetes significantly simplifies and extends compared to traditional deployments. In this scenario, we’ll specifically look at load balancing and autoscaling.

If you feel you already understand basic load balancing and autoscaling in Kubernetes, perhaps take a look at the Advanced Scaling Topics section at the end of this post.

Load balancing itself is not new, and simply refers to efficiently distributing incoming network traffic across a group of servers. It serves two primary purposes, enabling high availability, and allowing us to scale up 'horizontally' by adding further servers. It has more uses too; for example, when we come to roll out new versions of our code, the load balancing can enable us to do that without downtime.

In our scenario, the servers are integration servers running the integration flows. For our simple flow, it is only incoming HTTP traffic that we need to balance across them. We will look at other types of incoming traffic in future scenarios. 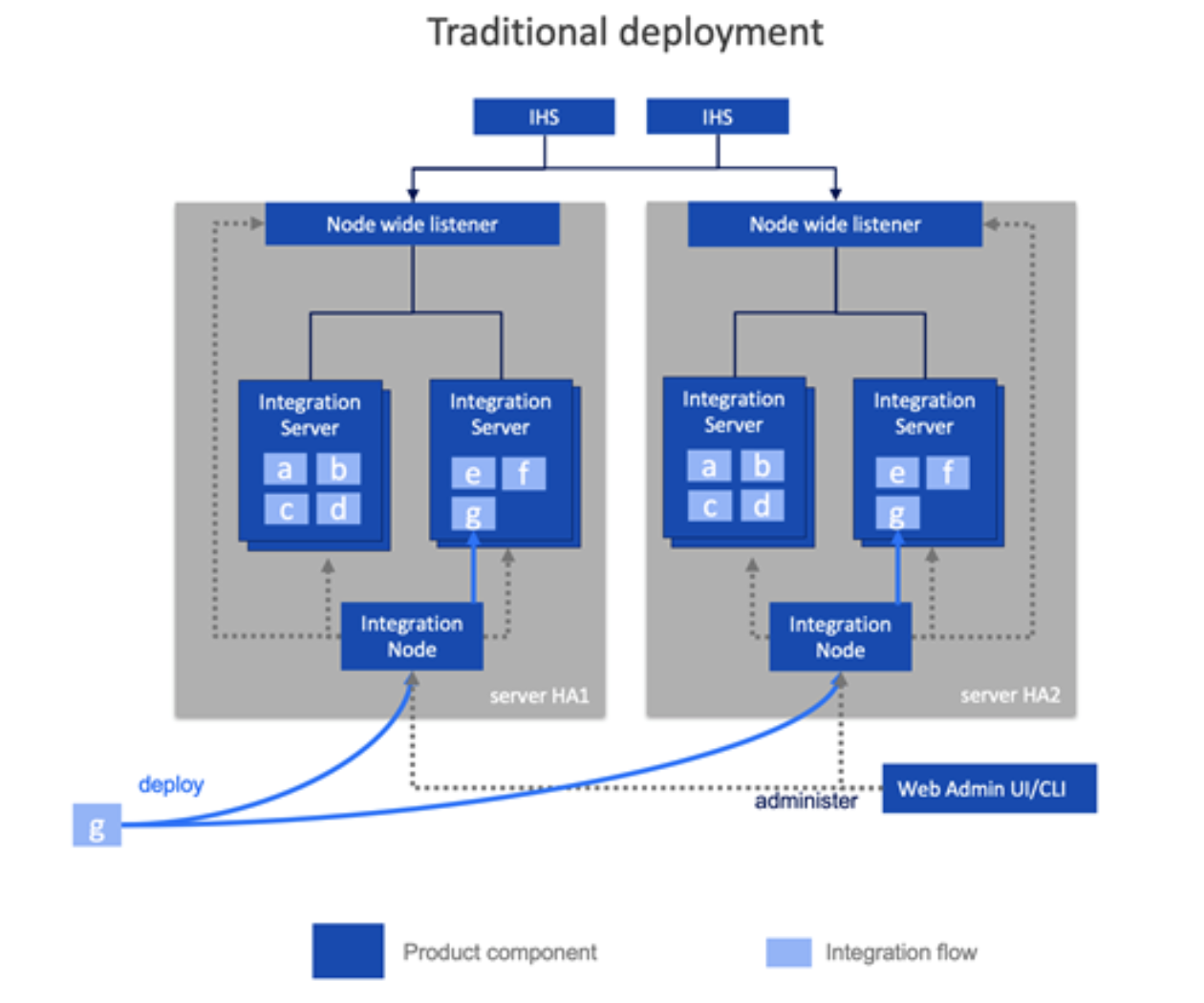 In a traditionally deployed environment, for example, directly on virtual or physical machines, load balancing was something that had to be explicitly set up by those installing the product and setting up the topology. You would likely need to set up an HTTP server to spray the requests across a statically configured set of integration servers. Since there might be multiple integration servers per machine, you might choose to have integration nodes receive the HTTP traffic and then configure those to spread the work to the underlying integration servers. Furthermore, you have to maintain this setup if you added more servers, or re-locate them to other network locations. That’s a lot of configuration, with a lot of specialism required around HTTP servers, and the integration nodes and servers to set it all up and look after it. Those skills aren’t hugely transferable to other products as much of it is specific to this particular runtime. 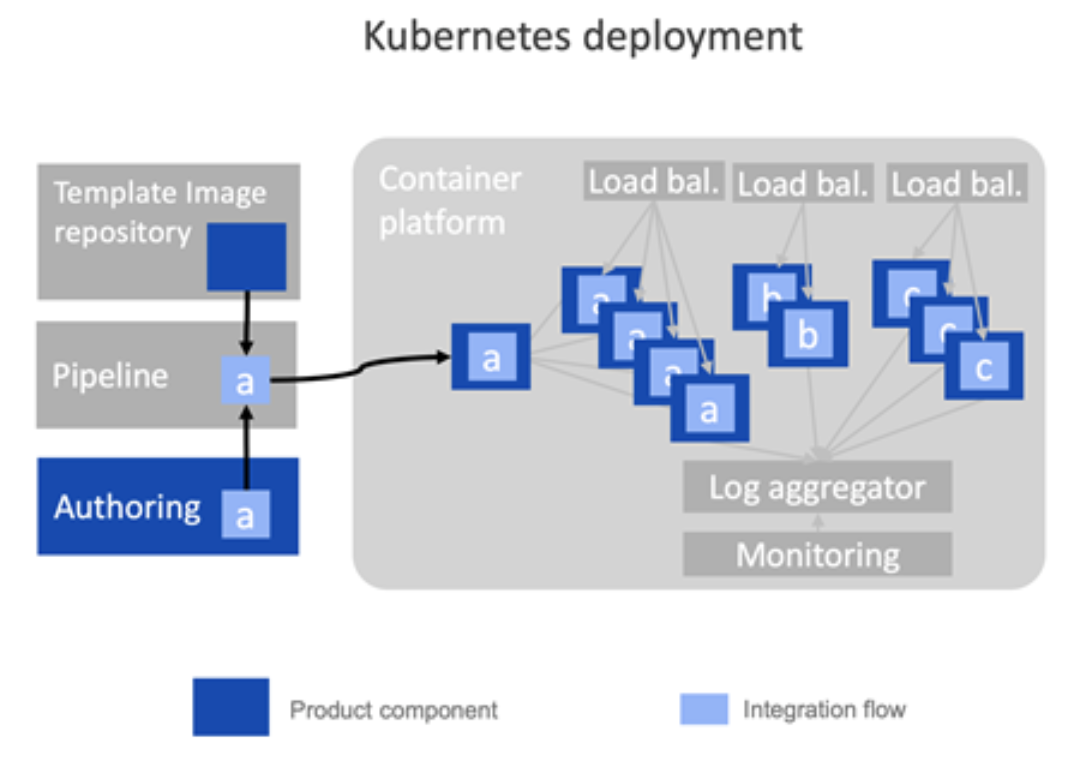 Some would say Kubernetes was originally created to simplify routing. When you deploy onto a Kubernetes environment, you don’t configure load balancing yourself, you just tell Kubernetes how many replicas of your container to create. Kubernetes then takes on the problem of creating those replicas, balancing the incoming requests between them, and re-configuring those routes if new replicas are added, or old ones stop working (and indeed re-instating the failed ones, and much, much more…).

It’s hard to overstate just how different this is to traditional environments. It means setting up load balancing is something that happens implicitly, and largely invisibly at deployment time rather than something that must be done in advance as a separate infrastructure step. This provides an enormous opportunity in terms of such things as more agile approaches in the development lifecycle, the consistency of the deployment pipeline, and the simplification of skills required to operate the environment.

What Is a 'Pod' in Kubernetes?

If we’re going to talk about load balancing in Kubernetes, we’re going to need to know a new term. Kubernetes always deploys containers in what’s known as a 'pod'. Often there is only one container per pod, although it is possible to have more than one. A pod is the unit of deployment. You can’t deploy part of a pod, only a whole one. Of most relevance to this post is that when you scale up, you create multiple identical pod replicas. So from this point on, when you hear us talking about 'load balancing across pods', or 'pod replication', you can roughly translate pods to containers, at least for the purposes of this post. You can read more about pods here.

The BAR file and other related artifacts for this scenario can be downloaded from https://github.com/amarIBM/hello-world/tree/master/Samples/Scenario-3

The following is the YAML definition file for our deployment.

Save this Integration CR definition as  IS-github-bar-3-replica.yaml.

We need to ensure the barauth configuration object is in place. Refer to the instructions for Scenario 2a for what this file should look like then apply it with the following command.

Now create the Integration Server with instructions for 3 replica pods.

Upon successful deployment, you will see 3 pods for your integration server using following command:

Get the public endpoint for your message flow service using ‘routes’

Since we have deployed IS with 3 replicas, we expect the messages to be distributed to each of the pods equally by the K8s service/load balancer.

So we send 6 messages to the message flow on the public URL obtained from the routes above. (Message flow is listening for incoming requests on endpoint  /Echo).

The message flow has been modified from earlier scenarios to output the pod name and pod IP address to allow us to know which pod the response has come from.

As you can observe from the output above, we sent 6 requests to the message flow using curl command. Each of the 3 pods has served 2 of the requests, so the load balancing is working.

You can also verify using the pod logs that each IS pod has received and processed the request.

This demonstrates that the requests are being spread across all the pods evenly using the default round-robin distribution.

When you first deploy your application to a Kubernetes cluster, you may not be sure about its resource requirements in different situations and usage patterns. Equally, you may know that the inbound workload varies significantly. Perhaps there is a low workload most of the time, but occasional much higher peaks.

So far in our definition for integration servers, we have only been able to specify a fixed number of replicas. In this section, we will show that you can add scaling policies to ensure that your workload scales up and down with demand, and thereby functions consistently in different situations without needing to over-provision the capacity to cater to some occasional peak loads. 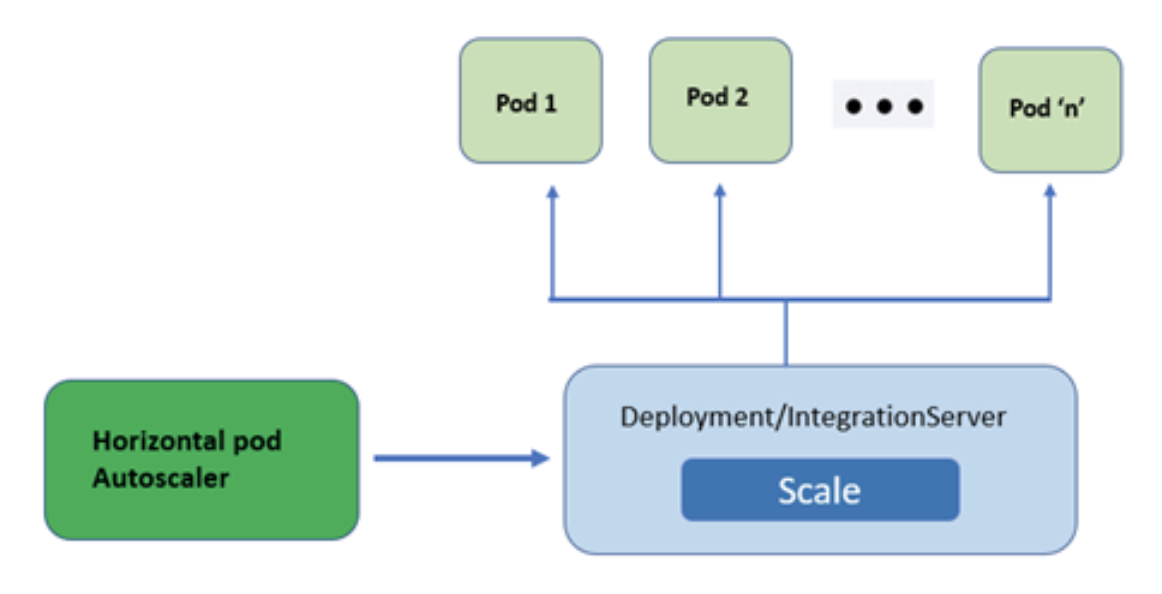 You can create a horizontal pod autoscaler (HPA) to specify the minimum and maximum number of pods you want to run, as well as the CPU utilization your pods should target. At the end of the post we’ll also discuss some more advanced scaling options.

The real magic here is that the load balancing we looked at in the beginning of this post, will dynamically follow the autoscaling and seamlessly spread the load across the available replicas without the need for any further configuration.

In order to demonstrate the autoscaling feature in the context of the App Connect certified container, we will create an Integration Server and associate that with an HPA policy in our OpenShift cluster. If you don’t have time to perform the below exercise there is an excellent demonstration of the capability in a previous video. Feel free to return here afterwards to understand what’s happening under the covers.

We will first create an Integration Server that has a fixed replication policy of one replica.

Save this to a file named IS-github-bar-autoscaling.yaml

Note that the number of replicas is set to 1 and cpu limits to a maximum of 300m (millicores) – a third of a CPU.

IMPORTANT: Our bar file for this scenario is once again on Git Hub, so don’t forget that we need to create a barauth 'configuration' object that defines the credentials. The instructions for this are in Scenario 2a.

Now we’re going to create a Horizontal Pod Autoscaler (HPA) policy that targets the integration server we just deployed (auto-scale-demo).  The policy will state that the integration server should be scaled up if the CPU utilization of a pod reaches 80% of the allocated CPU. It will also state that the maximum number of replicas to scale to up to (maxReplicas) is 3.  Recall that in our integration server definition above, we set the CPU to 300m (millicores of CPU), so if the CPU of any POD reaches 240 millicores, the auto scalar will kick in and start replicating.

Following is the YAML definition of HPA that we will create in our cluster.  Save this in a file named ace_autoscaler_policy.yaml

Let's stress test the message flow by sending a high volume of messages so that it drives high CPU usage. We used the SoapUI tool to generate the load for the message flow. You may however use any other tool that is available to you and is capable of generating load for the target HTTP endpoint.

In this example, we can see that the POD’s CPU utilisation reached above the trigger limit so HPA has spawned an additional two pods (max total pods 3 as per the policy).

You can see the scaling up activity in the OpenShift event log as well.

Now we stop the stress test activity and keep the message flows idle or with very minimal volume of messages for some time. The HPA will recognize that the IS does not need 3 replicas for the amount of load currently it has, so it will scale it down to 1 replica.

We began this article discussing load balancing. Did you notice that Kubernetes automatically adjusted the load balancing to spread the load across however many replicas were available? You didn’t have to do a thing!

How Does Autoscaling Really Work, and What Does This Tell us About Kubernetes?

Autoscaling and the associated dynamic load balancing works because HPA is just using the core underlying Kubernetes functionality. When the HPA sees a need to scale up or down, it edits the 'replica' value in the integration server definition to a new value. The rest is regular Kubernetes activity. Kubernetes is constantly monitoring the definitions for changes. When it sees a change in the replica count it attempts to make the actual deployment match the definition, adding or removing a replica. It doesn’t know or care whether it was an HPA that made the change, or you running a command line, or editing the definition in the web console, it’s all the same to Kubernetes.

This idea of matching the current state with a 'to-be' state is fundamental to how Kubernetes works, and is one of its strongest assets. It means the state of an environment can be completely described using definition files which could (and probably should…) be stored in a source control repository. This enables us to completely and reliably re-create an environment from scratch on any Kubernetes platform.

Compare this to a traditional environment, that was perhaps built several years ago and has had multiple in-situ updates since that is lost in the mists of time. It quickly becomes hard to know for sure whether the various environments (development, test, production, etc.) are actually identical, and it is extremely hard to reliably re-create an environment should you need to.

Kubernetes allows us to define our topology as 'code' in a repository, and build that topology accurately from scratch at deployment time. It means our CI/CD pipeline can contain not just the code we’re deploying, but the runtime characteristics of our solution too. It even enables us to 'roll back' an environment, for example to a 'last known good' state.

Let’s finish with a look at some more advanced topics around scaling.

Acknowledgement and thanks to Kim Clark for providing valuable input to this article.

Published at DZone with permission of Amar Shah. See the original article here.