In this article, we’re going to cover HTTP request and response processing using the Ballerina programming language. This will take an in-depth look at how HTTP clients are created, and how its functionality is used effectively.

The “clientEp” instance above now represents a client to the “example.com” host through the HTTP protocol. In the default configuration, a connection pooling configuration is attached by default, which means, a single client object is backed by a pool of network connections to the host.

The code above creates a client by providing an explicit client configuration, which provides the connection pooling configuration.

The following shows an example of its usage.

An HTTP POST is executed using the post remote method in the HTTP client. Here, we can provide the request path as the first parameter. The second parameter is a value of http:RequestMessage, which is a union type of http:Request and other data binding types such as XML, JSON, and other custom record types. The third parameter is the target type for providing the response data binding type, similar to the result of the HTTP GET functionality. The default value of the target type is http:Response.

Similar to get and post remote methods, there are other methods such as put, delete, patch, head, and options to represent the HTTP methods. There is also a generic execute remote method for users to specify the HTTP verb and execute the HTTP action.

A MIME entity in Ballerina is represented using the mime:Entity object. Let’s take a look at how we can use a MIME entity in setting a text payload in an HTTP request.

The mime:Entity object contains functions for setting the body with other data types, such as binary, XML, and JSON, as well.

A multipart message can be created by setting the body parts in the mime:Entity object using the setBodyParts method. This method takes in an array of mime:Entity objects, and also optionally the content type of the enclosing entity, where the default is set to multipart/form-data. If required, we can override this with other multipart values such as multipart/mixed, multipart/alternative, and multipart/related.

The following example shows how a multipart/mixed message is created using plain text content and an image file as an attachment.

Here, the setContentDisposition method in the mime:Entity object is used to set the content disposition of the entity. This provides information on how the recipient should handle the data. For example, if it should be displayed inline, treated as form data, or downloaded as an attachment.

Similar to how we work with MIME entities in HTTP requests, the HTTP response entities can also be processed using the getEntity method in the http:Response object.

Example usage of this is shown below.

In our earlier HTTP GET scenarios, we used the default value of the target type parameter in the get remote method of http:Client, which is http:Response. We can also pass in the types string, json, xml, map<json>, byte[], and custom record and record array types to perform automatic data binding with the returned payload.

In the data binding scenario, any HTTP response that returns status codes 4xx or 5xx are considered error situations, and thus, the get remote method will return the error value of type http:ClientError.

Here’s an example of using JSON and XML data binding.

Similarly, the following example demonstrates the usage of a custom record type in data binding.

In the record data binding scenario, the field names must match the fields in the returning JSON payload.

HTTP data streaming can be attained using chunked transfer encoding. In Ballerina, the clients automatically switch between chunked or non-chunked mode based on the size of the content provided as the payload. This is controlled from the http:ClientConfiguration object’s http1Settings.chunking property, which has a default value of AUTO. The fully supported modes are as follows:

To effectively use the HTTP streaming feature, we need to create an HTTP request with a streaming input data channel. For example, if we want to stream the content of a large file to a remote endpoint, but we read its content using a function such as io:fileReadBytes to read in the full content as a byte array to memory, then we lose the benefit of streaming the data. So in this case, we should use a streaming data channel, by using an API such as io:openReadableFile, which returns a ReadableByteChannel. This streaming data channel can be used in places that accept streaming channels, such as the http:Request object’s setByteChannel.

The following example shows a scenario of opening a file with a streaming data channel and using it to create an HTTP request to stream its data to a remote endpoint.

In the code above, since we are using the default HTTP client configurations, if the input file is larger than 8KB, it will automatically stream the content to the remote endpoint using chunked transfer encoding.

The HTTP client supports multiple communication resiliency options out of the box. These features allow us to handle and recover from unexpected communication scenarios gracefully.

The HTTP client can be configured with a retry configuration using the “retryConfig” property in the HTTP client configuration to retry sending the same request to the endpoint in the case of a failure. This follows an exponential backoff algorithm to execute the retry requests.

The example below shows an HTTP client configured with a retry configuration.

The circuit breaker pattern is used to handle temporary faults when communicating across the network. If a remote endpoint is not available due to a high service load or a network failure, our application may be repeatedly trying to communicate with this service, waiting till it returns a successful result. If the requests keep failing continuously and adding more stress to the backend system, it is not a desirable state for our system. We should rather fail-fast and handle the error from the application. This will make sure the caller is not wasting too many resources by waiting for request timeouts and so on, thus holding back a chain of network calls, which in-turn may be holding up resources such as execution threads and network connections. 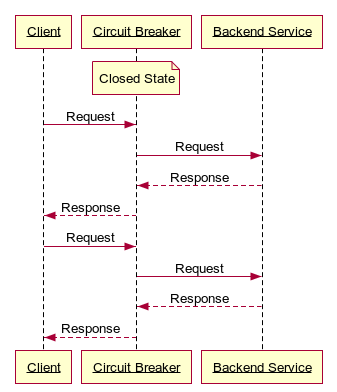 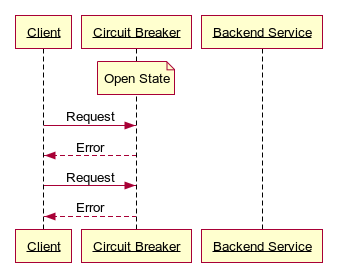 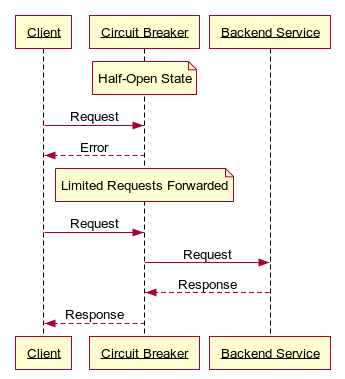 The circuit breaker pattern can be used in Ballerina HTTP clients by using its client configuration. This contains the following configuration properties:

The example below shows an HTTP client configured with a circuit breaker.

Here, the HTTP client is configured with a circuit breaker configuration that tracks a 10-second rolling window of request statistics and updates its information with 2-second intervals. By including a request volume threshold of 5, any fewer number of requests in the rolling window will not trigger the logic to trip the circuit. Otherwise, in the case of 20% requests failure in the rolling window, the circuit will trip and go into the open state. Now, the client will immediately return errors until 10 seconds, where it will go into a half-open state, and check again if the backend service is responding with successful responses. If the backend request succeeds, the circuit will go back to the closed state and all clients’ requests will be forwarded to the backend service. Or else, it will go back to an open state.

Similarly, Ballerina supports fail-over scenarios using http:FailoverClient. Here, a list of target URLs can be provided to attempt requests in order, where in the case of failure, it will move on to the next available URL in the list for retrying the request. The following example shows this in action.

The TLS features are used with the HTTP client by using the “https” protocol in the endpoint URL. Here, we can optionally provide the information on the trust store location to use for validating the server certificates received when creating an HTTP connection over TLS. This is provided using the “secureSocket” property in the HTTP client configuration.

The following example shows a scenario of communicating with an HTTPS endpoint.

A custom trust store configuration can be created and provided to the client in the following manner.

In our general TLS case, the server is authenticated using the certificate provided to the client, and the secure communication is started based on this information. In the mutual SSL scenario, the client also gets the chance to authenticate itself with the remote server. This is done by additionally providing a key store (“secureSocket.keyStore” property in the HTTP client configuration), which will contain our private key and the certificates used to authenticate ourselves to the remote server.

The example below shows an HTTP client configured for mutual authentication.

More information on Ballerina’s authentication/authorization features can be found in the Ballerina auth module.

In this article, we took a look at the HTTP client communication features available in the Ballerina programming language. It provides a feature-complete client functionality that can be used to implement any required scenario. For more in-depth information on the HTTP APIs, check out the Ballerina API documentation for the HTTP module.

Also, quick examples of Ballerina features can be found in Ballerina by Example.