It's not so hard to create a single endpoint API or a "Hello, World!" page.  But what about creating a complete microservice: multiple endpoints with CRUD services, business logic enforcement, and a multi-page application?  Well, that's a horse of an entirely different feather.

In this article, we'll show how to use open source technologies to:

Create a Project With One Command

API Logic Server is an open-source Python project, and consists of the following, as outlined in the official documentation:

It runs as a standard Python (pip) install, or under Docker. Here, we use the CLI under Docker to create our project, with the ApiLogicServer create command:

Quite a Lot Just Happened: Executable API and App

Quite a lot just happened that substantially accelerates your project.

The ApiLogicServer create command
introspected your database to
create an executable API and app.

Here, the default database was used: a pre-supplied version of Northwind (Customer, Orders, etc.). The project is ready to run. Start the server like this:

Then, use your browser to run the app and API.  You can explore it on PythonAnywhere.

The process is shown in the diagram below, mapping your actions (A, B, C, D: you just did step B) onto a modern n-tiered software architecture: 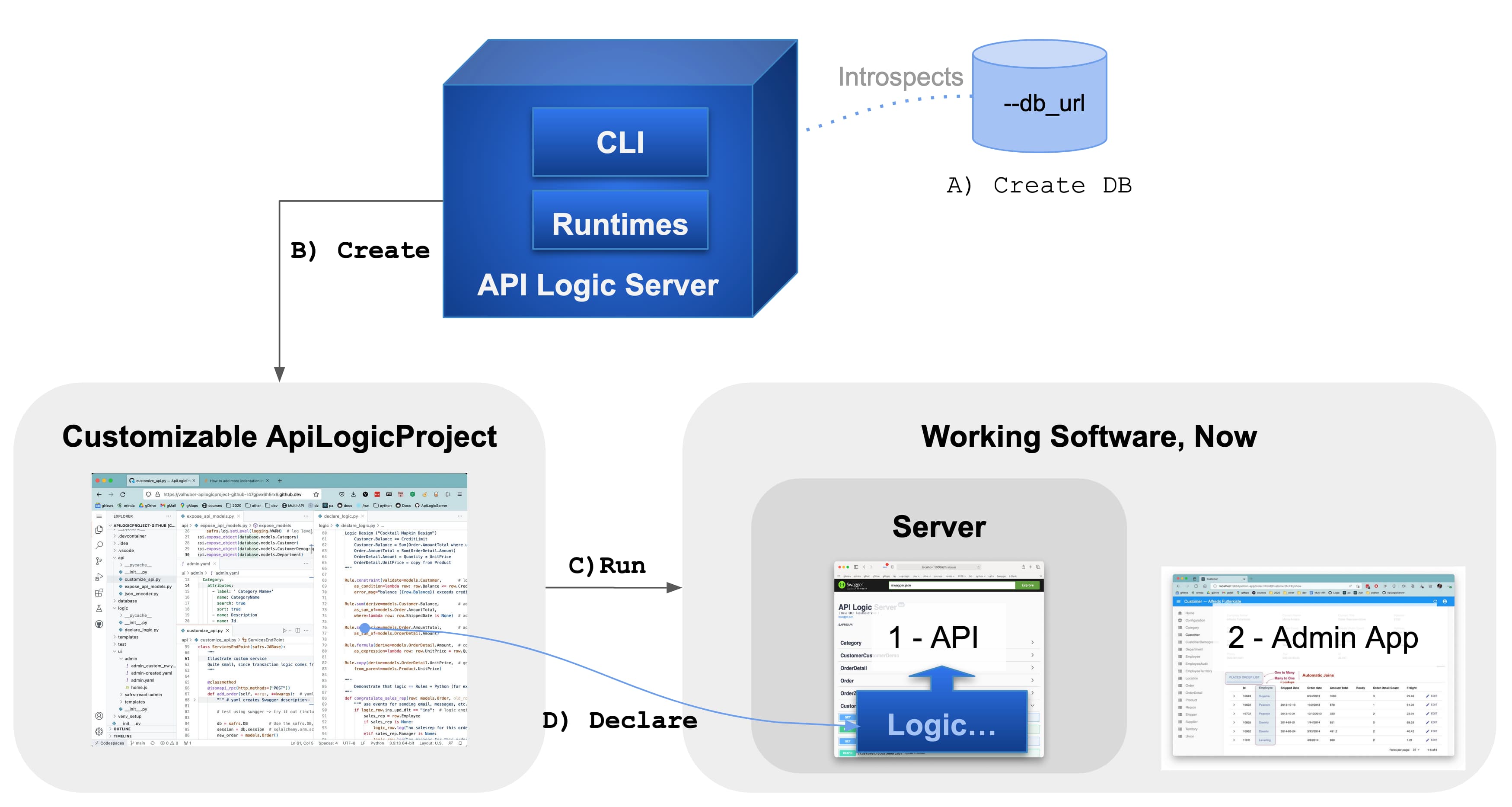 Let's have a closer look at creation automation.

The creation process builds a react-admin application as shown below.  The database relationships are used to construct master/detail pages (placed orders for each customer) with automatic joins.

The screenshot below illustrates automatic joins.  Each Order has an EmployeeID for the Sales Rep, but Business Users cannot make sense of IDs (who is Employee 22?).  So, the system automatically joins in the Employee Name.  This is just a default. It's simple to specify your own joins. 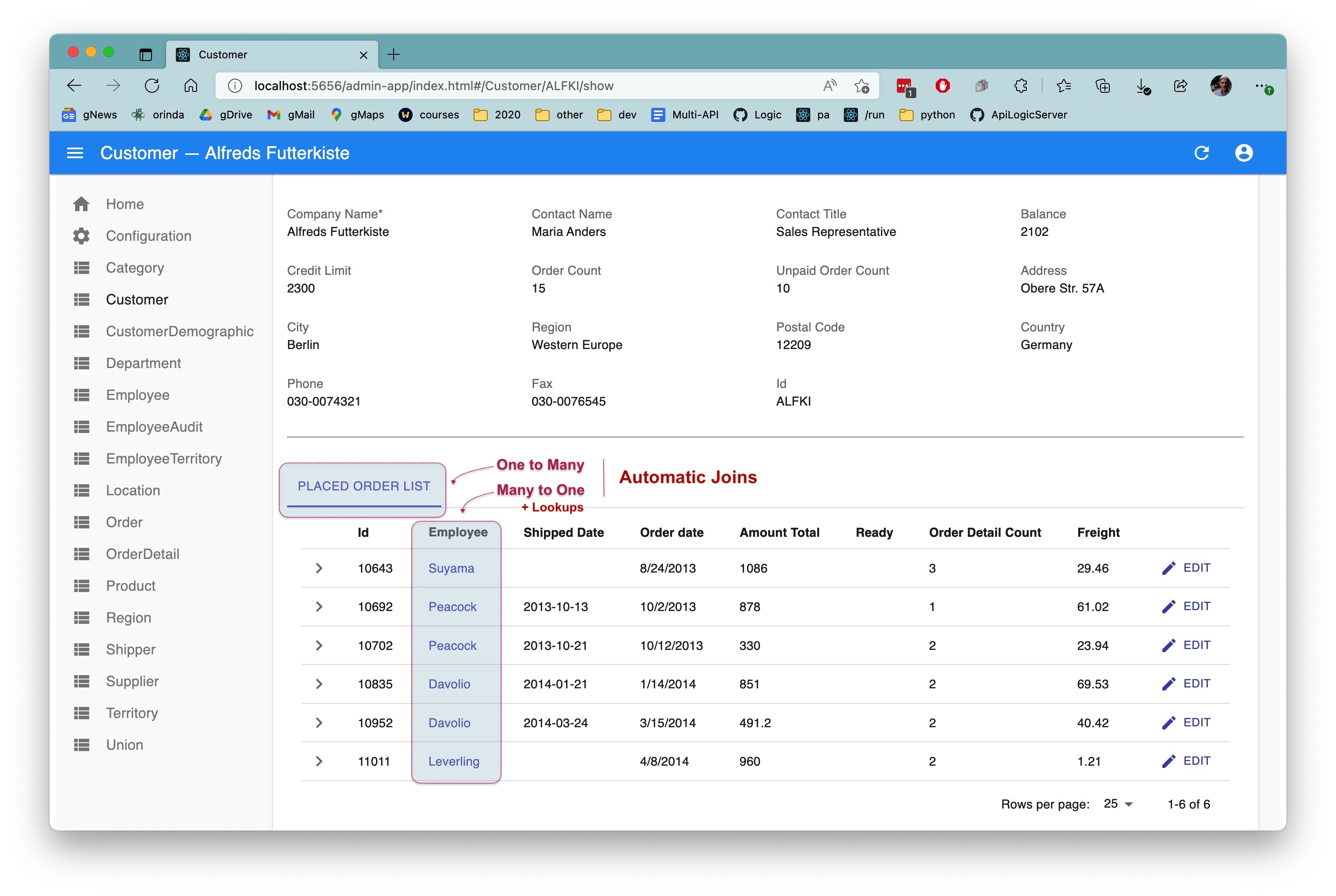 The "create" process also builds the underlying API: an endpoint for each table, with support for GET, POST, PATCH, and DELETE.  GET operations support filtering, sorting, pagination, and related data access.  Update operations to enforce the business logic described below.

The Admin App above is useful for connecting with business users and back office data maintenance, but most projects will require custom UIs as well.  This instant API has two important implications: 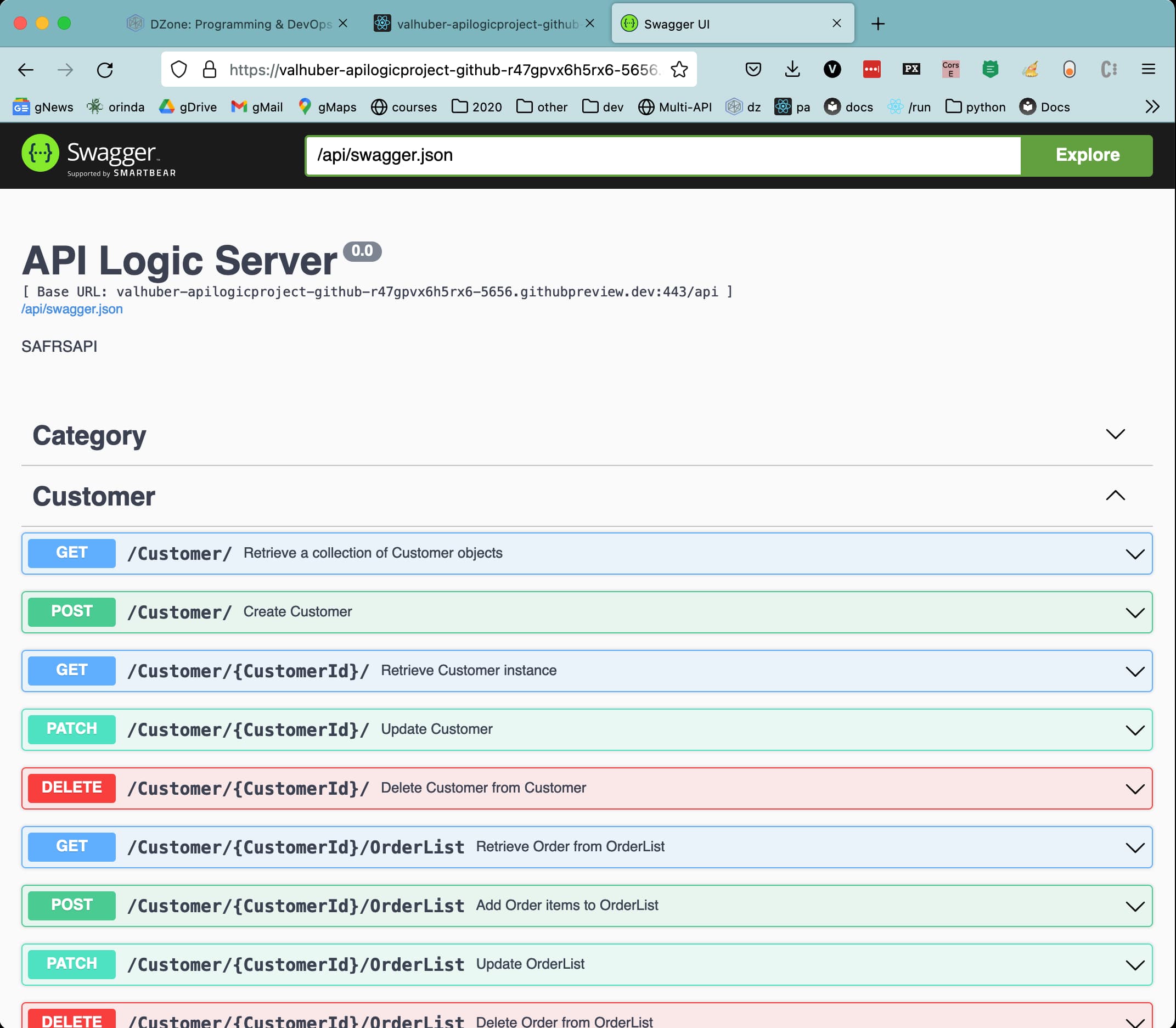 Save API Logic Project to GitHub

Save your project to your GitHub account just as you usually do, as follows:

Customize It With VSCode

ApiLogicServer create provides impressive automation, but let's face it: it's only useful if you can customize it (e.g., add new endpoints, add business logic, integrate with external systems, etc.).

The ApiLogicServer create command creates a
standard customizable project, a directory
you can open in your current IDE, such as PyCharm or VSCode.

Here's our project, open in VSCode: 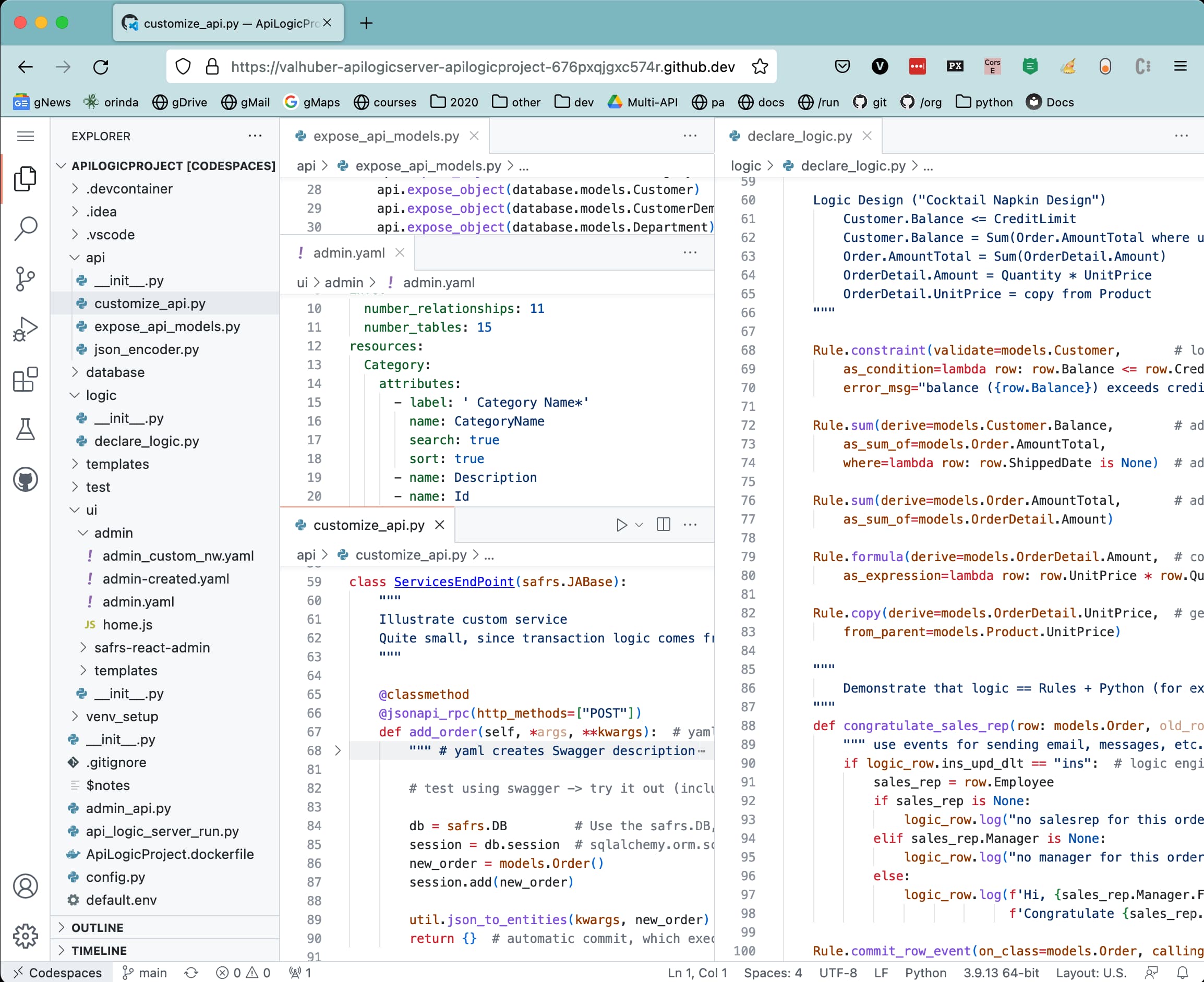 Let's take a look at some key points.

Models, Not Code: Much Simpler To Understand, Customize

Created projects are small since the creation process constructs models and not a massive generation of code that is hard to understand or customize.  For example, as shown above:

The screenshot also illustrates some key customizations, described below.

You can extend the automatically created endpoints as shown in customize_api.py.  You can use:

API and UI automation are impressive answers to familiar challenges.  Logic automation is a unique answer to a significant and unaddressed problem:

For transaction systems, backend multi-table constraint and derivation logic is often nearly half the system.  This is not addressed by conventional approaches of "your code goes here."

The logic portion of the API Logic server is a declarative approach: you declare spreadsheet-like rules for multi-table constraints and derivations.  The 5 rules shown below (Figure 5) represent the same logic as 200 lines of Python: a remarkable 40X.

Since they automate all the re-use and dependency management,
rules are 40X more concise than code.

Like a spreadsheet, rules watch for changes and react by automatically executing relevant rules, which can chain to activate other rules (you can visualize the process here).  The rules engine in API Logic Server operates by listening to ORM events.  This means your logic is automatically reused over APIs and custom code (e.g., new endpoints, message handlers, etc.).

Logic consists of rules and conventional Python code.  Referring to declare_logic.py in Figure 5 below: 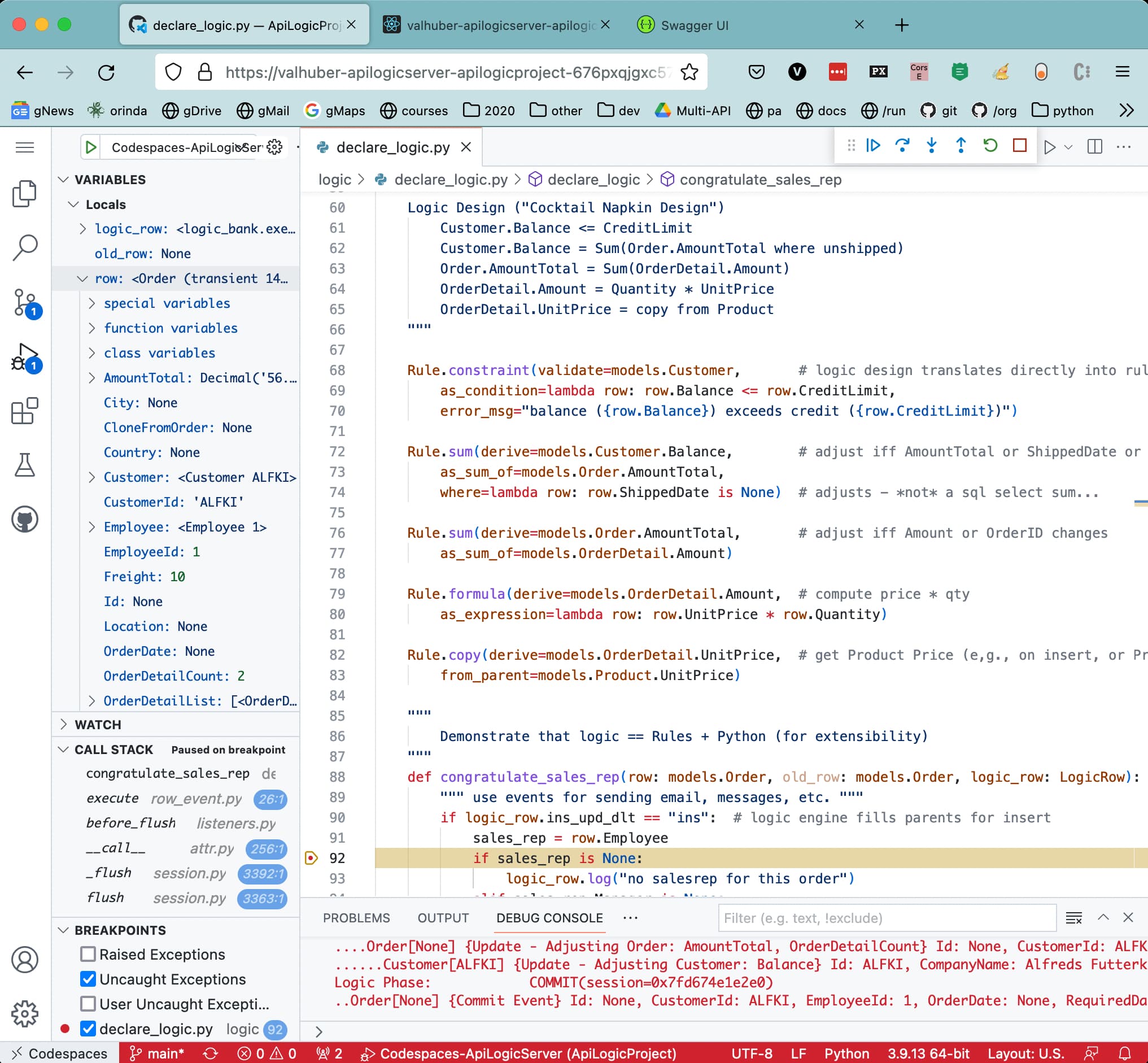 Take a closer look at the VSCode screenshots above.  They look just like VSCode running on your desktop (which is also quite simple), but, instead, they are running in the browser.

But, what are they connected to?  The browser is not interacting with your desktop.  In fact, your desktop might not even have Python or ApiLogicServer installed.

Instead, it is accessing a machine - in the cloud - that was dynamically created for your GitHub project.  It is a fully containerized development environment (IDE, terminal, dependencies, lifecycle actions) integrated with GitHub (repo, secrets, etc.).

All this magic is courtesy of Codespaces, a new product from GitHub.  The underlying premise:

We saw the GitHub portion above.   Now let's look at API Logic Server support for developing in a container, and then how we can manage that with Codespaces.

Container configuration is fully automated. The ApiLogicServer create command creates projects that are pre-configured for containers.  Projects include creating 2 files (details below):

You can see the .devcontainer directory in the upper left in Figure 4 - API Logic Project, above.  .devcontainer/devcontainer.json looks like this:

The apilogicserver/api_logic_server image definition on DockerHub contains Python, API Logic Server, etc. - all the libraries for your project.

This automated container configuration enables API Logic Server projects to be customized, run, and debugged under VSCode, in 2 different ways:

Let's have a look at running under Codespaces.

Automated container configuration makes using Codespaces remarkably simple. This unlocks some very interesting scenarios.  For example, maybe a colleague would like you to examine their project; but it's Python - not always a simple install.  However, it is simple using Codespaces.

Got a GitHub account?
Execute the procedure below,
in about 2 minutes.

Using your GitHub account, you launch Codespaces from the GitHub project (you can use this project to explore Codespaces): 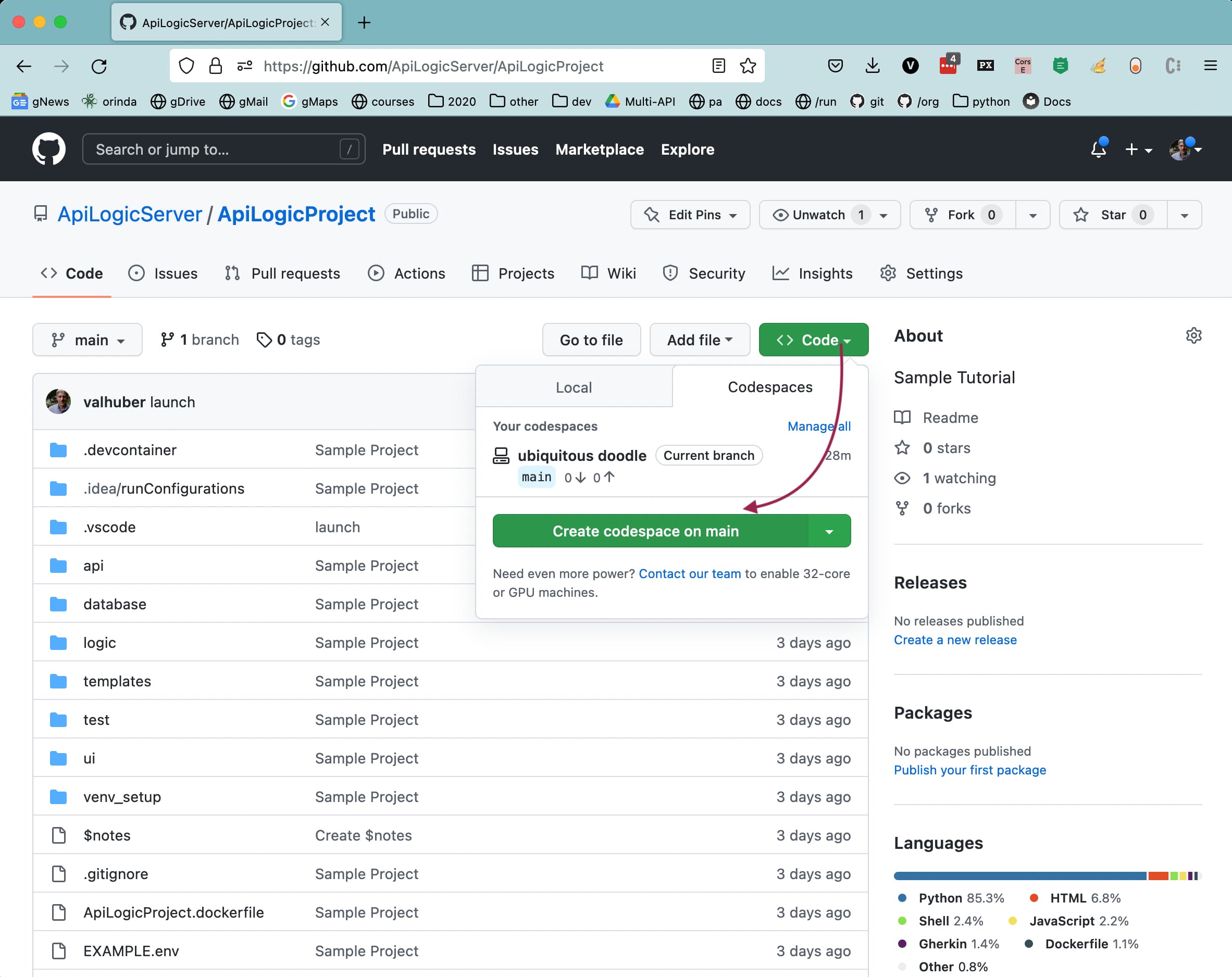 Codespaces uses the automated configuration described above to requisition a computer on the cloud, start your project in the container, and provide access through VSCode running in your browser.  It's amazingly fast to start (around 10 seconds).

With Codespaces, there's no need to configure your Desktop
as a dev machine (install Python, configure databases, etc).
That friction is eliminated.

As shown below, all you need to do now is: 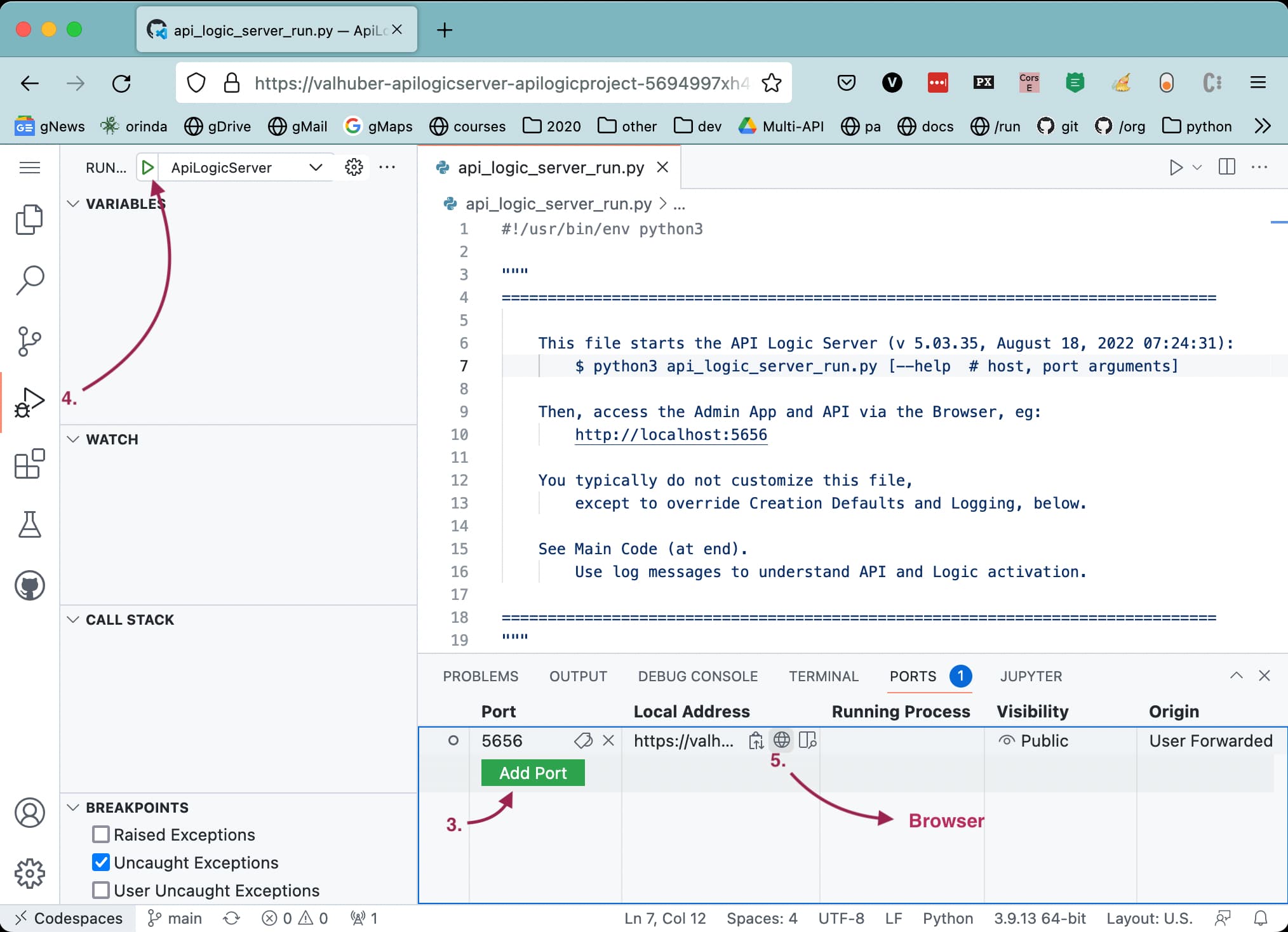 And there you have it: your project, in the browser, running high in the cloud.  Just don't look down.

Of course, the "quick look" is just one scenario.  If your team is losing time with each developer installing and configuring their development environments, Codespaces can eliminate that friction. DevOps... for Devs.

Much of this underlying magic is based on containerized software.  Why not containerize the created project, to make it easy to deploy, and build dynamic scaling sites (e.g., Kubernetes)?

Which you can invoke like this to publish an image of your project to DockerHub:

Automation: Running in Moments, Not Weeks or Months

With a single command, we created the following:

It's a low-code approach that creates standard projects you can customize with the IDEs and tools you're already familiar with, such as VSCode.

Rules look like formalized design specifications, are 40X more concise than code, and are extensible with Python.

Codespaces eliminates the fiddling to set up development machines, enabling you to focus on creating value.

It's all open source, at API Logic Server.