What Is ‘Waiting’ CPU Time?

Waiting CPU time indicates the amount of time the CPU spends waiting for disk I/O or network I/O operations to complete. A high waiting time indicates that the CPU is *stranded* because of the I/O operations on that device. For optimal performance, one should aim to keep the I/O waiting CPU time as low as possible. If waiting time is > 10%, then it is worth investigating it.

How to Find ‘Waiting’ CPU Time?

Waiting CPU time can be found from the following sources:

b. ‘Waiting’ CPU time is also reported in the Unix/Linux command line tool ‘top’ in the field ‘wa’ as highlighted in the image below.

How to Simulate a High ‘Waiting’ CPU Time?

To simulate high ‘waiting’ CPU reporting, let’s use BuggyApp. BuggyApp is an open-source Java project that can simulate various performance problems. When you launch BuggyApp with the following arguments, it will cause the ‘waiting’ CPU consumption to spike on the host. 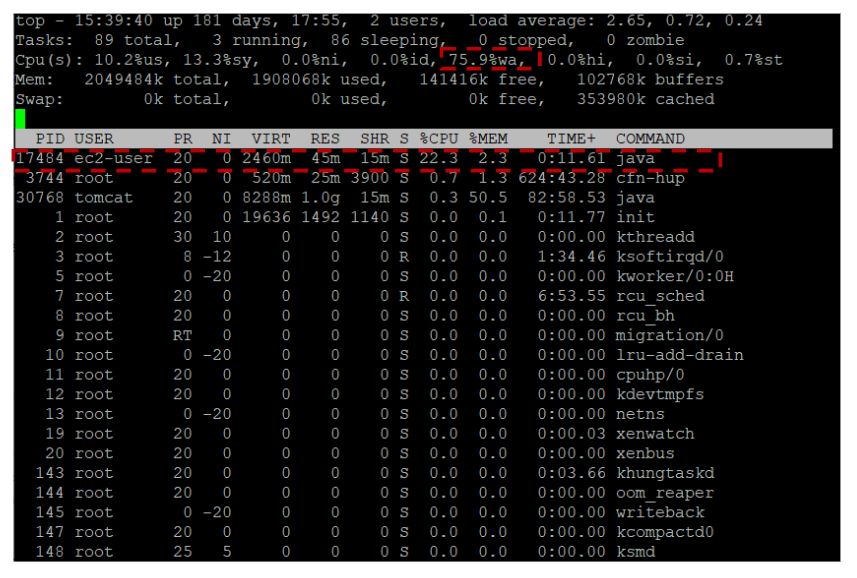 Now let’s see the source code in BuggyApp that is causing the ‘waiting’ CPU time to spike.

Here you can see that BuggyApp is launching 5 ‘IOThreads’ in the ‘IODemo’ class. You can see that ‘IOThread’ is going on an infinite while loop. In that loop, it’s writing the content into a file and reading the same content from the file. It is doing these two steps repeatedly. Since writing content and reading content from the disk is an I/O-intensive operation, ‘waiting’ CPU time is spiking up to 75.9%

How to Resolve High ‘Waiting’ Times?

If your device is suffering from a high I/O waiting time, then you can follow the steps outlined below to reduce it: