In this article, we will discuss 21 important Java exception handling interview questions with the answers.

Before we get started, check out this  complete beginner-to-expert, in-depth exception handling tutorial in Java!

Let's explore the following questions, which are likely to appear in technical interviews for Java developers regarding exceptions.

1. What Is an Exception in Java?

An exception is an event that occurs during the execution of a program and disrupts the normal flow of the program's instructions.

Read more about exceptions in Java in the Java Exception Handling Guide!

2. How Does Exception Handling Work in Java?

Below steps demonstrates how the exception handling works in Java:

Step 2: After a method throws an exception, the runtime system attempts to find something to handle it. The set of possible "somethings" to handle the exception is the ordered list of methods that had been called to get to the method where the error occurred. The list of methods is known as the call stack. The following diagram shows the call stack of three method calls, where the first method called has the exception handler. 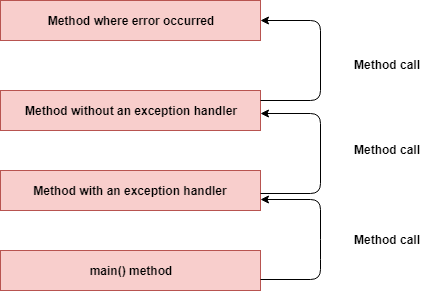 Step 3: The runtime system searches the call stack for a method that contains a block of code that can handle the exception. This block of code is called an exception handler. The search begins with the method in which the error occurred and proceeds through the call stack in the reverse order in which the methods were called. When an appropriate handler is found, the runtime system passes the exception to the handler.
An exception handler is considered appropriate if the type of the exception object thrown matches the type that can be handled by the handler.

Read more at How the Exception Handling Works in Java with Example.

3. What Are  Exception Handling Keywords in Java?

1. try: Enclose the code that might throw an exception within a try block. If an exception occurs within the try block, that exception is handled by an exception handler associated with it. The try block contains at least one catch block or finally block.

2. catch: The Java catch block is used to handle the exception. It must be used after the try block only. You can use multiple catch blocks with a singletry.

3. throw: Sometimes, we explicitly want to create an exception object and then throw it to halt the normal processing of the program. The throw keyword is used to throw an exception to the run-time to handle it.

This diagram provides a summary of the usage of these keywords. 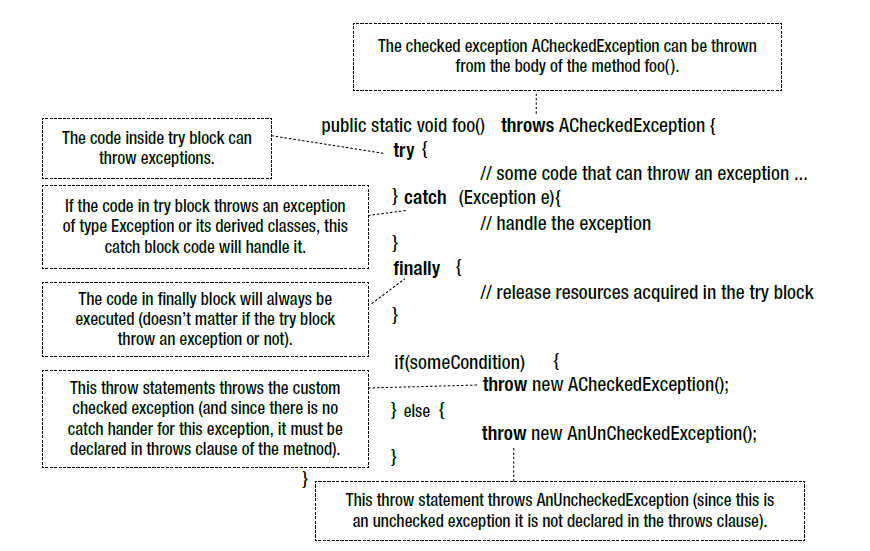 Read more about all five keywords at Exception Handling Keywords in Java with Examples.

4. What Is the Purpose of the Throw and Throws keywords?

Thethrows keyword is used to specify that a method may raise an exception during its execution. It enforces explicit exception handling when calling a method:

Thethrow keyword allows us to throw an exception object to interrupt the normal flow of the program. This is most commonly used when a program fails to satisfy a given condition:

5. How Can You Handle an Exception?

You can handle an exception by using a try-catch-finallystatement:

The block of code in which an exception may occur is enclosed in a try block. This block is also called “protected” or “guarded” code. If an exception occurs, the catch block that matches the exception being thrown is executed. If not, all catch blocks are ignored. The finally block is always executed after the try block exits, whether an exception was thrown inside it or not.

The figure below illustrates the class hierarchy of the Throwable class and its most significant subclasses.

Error Class: When a dynamic linking failure or other hard failures in the Java Virtual Machine occurs, the virtual machine throws an Error.

Exception Class: Most programs throw and catch objects that derive from the exception class. An exception indicates that a problem occurred, but it is not a serious system problem. For example, when dealing with the FileNotFoundException, we should catch this exception and provide a useful message to the user and log it properly for debugging purposes. The exception is the parent class of all checked exceptions.

RuntimeException Class: This provides one exception subclass, RuntimeException, that is reserved for exceptions that indicate an incorrect use of an API. An example of a runtime exception is the NullPointerException, which occurs when a method tries to access a member of an object through a null reference.

7. How Can you Catch Multiple Exceptions?

There are three ways to handle multiple exceptions in a block of code.

The first is to use a catch block that can handle all exception types being thrown:

You should keep in mind that the recommended practice is to use exception handlers that are as accurate as possible.

Exception handlers that are too broad can make your code more error-prone, catch exceptions that weren’t anticipated, and cause unexpected behavior in your program.

Note that if the exceptions have an inheritance relationship, the child type must come first and the parent type later. If we fail to do this, it will result in a compilation error.

The third is to use a multi-catch block:

This feature, first introduced in Java 7, reduces code duplication and makes it easier to maintain.

8. What Is the Difference Between Checked and Unchecked Exceptions in Java?

3. Checked exceptions are error scenarios that require being handled in the code, or else, you will get a compile-time error. For example, if you use FileReader to read a file, it throws the FileNotFoundException and we must catch it in the try-catch block or throw it again to the caller method. Unchecked exceptions are mostly caused by poor programming, for example, the NullPointerException when invoking a method on an object reference without making sure that it’s not null. I can write a method to remove all the vowels from the string. It’s the caller's responsibility to make sure not to pass a null string. I might change the method to handle these scenarios, but ideally, the caller should take care of this.

4. Checked and unchecked exceptions are also known as compile-time and run-time exceptions respectively.

9. What Is the Difference Between Throw and Throws Keywords in Java?

The throws keyword is used with a method signature to declare exceptions that the method might throw, whereas the throw keyword is used to disrupt the flow of a program and handing over the exception object to run-time to handle it.

Read more at Difference Between Throw and Throws in Java.

10. What Is the Difference Between an Exception and an Error?

All errors thrown by the JVM are instances of Error or one of its subclasses. The more common ones include:

Although an error can be handled with a try statement, this is not a recommended practice since there is no guarantee that the program will be able to do anything reliably after the error was thrown.

Read more on this subject here: Exceptions Hierarchy in Java.

11. What Is the OutOfMemoryError in Java?

The OutOfMemoryError in Java is a subclass of the java.lang. VirtualMachineError and it’s thrown by the JVM when it runs out of heap memory.

The figure below illustrates the class hierarchy of the Error class.

We can fix this error by providing more memory to run the Java application through Java options.

12. What Is a Chained Exception in Java?

The chained exception feature allows you to associate another exception with an exception. This second exception describes the cause of the first exception.

For example, imagine a situation where a method throws an ArithmeticException because of an attempt to divide by zero. However, the actual cause of the problem was that an I/O error occurred, which caused the divisor to be set improperly. Although the method must certainly throw an ArithmeticExceptionsince that is the error that occurred, you might also want to let the calling code know that the underlying cause was an I/O error. Chained exceptions let you handle this and any other situation in which layers of exceptions exist. This concept was introduced in JDK 1.4.

13. How Can We Write a Custom Exception in Java?

In bigger applications, most of the cases we need custom exceptions for representing business exceptions are at a level higher than technical exceptions defined by the JDK.

Here are the steps that create a custom exception:

A simple example of a custom exception is shown below.

Read more in detail at Guide to Create Custom Exceptions.

14. What Is the Difference Between Final, Finally, and Finalize in Java?

1. final: is used to apply restrictions on the class, method, and variable. The finalclass can't be inherited — nor can it be overridden or changed.

2. finally: this keyword is used with the try-catch block to provide statements that will always get executed even if some exception arises. Usually, finally is used to close resources.

3. finalize: is used to perform clean up processing just before the object is garbage collected.

15. What Happens When an Exception Is Thrown by the Main Method?

When an exception is thrown by main() method, Java Runtime terminates the program and prints the exception message and the stack trace in-system console.

16. What Is the Try-With-Resources Statement?

17. What Is a Stacktrace and How Does it Relate to an Exception?

A stack trace provides the names of the classes and methods that were called, from the start of the application to the point that an exception occurred.

It’s a very useful debugging tool since it enables us to determine exactly where the exception was thrown in the application and the original causes that led to it.

18. What Are the Advantages of Java Exceptions?

The following are advantages of using exceptions in your programs:

2: Propagating errors up the call stack

Read more detail about each advantage here at Advantages of Java Exceptions with Examples.

19. Can You Throw any Exception Inside a Lambda Expression’s Body?

However, if you are using a custom functional interface, throwing checked exceptions is possible:

20. What Are the Rules We Need to Follow When Overriding a Method That Throws an Exception?

Several rules dictate how exceptions must be declared in the context of inheritance.

The next example will fail to compile since the overriding method throws a checked exception not declared in the overridden method:

Note that both methods respect the rule. The first throws fewer exceptions than the overridden method, and the second, even though it throws more, they’re narrower in scope. However, if we try to throw a checked exception that the parent class method doesn’t declare or we throw one with a broader scope, we’ll get a compilation error:

I kindly suggest that if you have other interview questions regarding Java exception handling that will help others prepare for their interview, leave a note in the comments below!

Published at DZone with permission of Ramesh Fadatare. See the original article here.