The capability of concurrent processing is no longer a nice-to-have quality, but rather a must-have one in today’s software applications. While almost all modern programming languages provide different semantics to achieve this capability, when it comes to Java, the JVM threads are mostly concerned with concurrency.

Therefore, Java provides many utilities to handle concurrency-related matters under its java.util.concurrent package. One of the most important utilities is an ExecutorService called ThreadPoolExecutor, which has the capability to accept asynchronous concurrent tasks and carry them out using a pool of threads that it maintains underneath. Most importantly, this ExecutorService takes care of the maintenance tasks of the thread pool such as spawning new threads and evicting idle ones, while developers only have to provide the parameters that control the size and scalability factors of the pool.

The three most important such parameters are the core pool size, maximum pool size, and the work queue. According to the Java documentation, the following are the definitions of those parameters.

So let’s take an example scenario and see how the default Java thread pool executor will behave under a load of concurrent tasks.

If you are already aware of how the default thread pool executor works and you are here just to know whether scale-first is a myth or a reality, you can skip the next section and head onto the one after that.

First of all, let’s configure an instance of Java’s ThreadPoolExecutor (which will be referred as Thread Pool here onwards) and observe how it behaves when a set of concurrent tasks are submitted. Assume that this thread pool is configured with a core size of 20, a max size of 100, a bounded work queue of size 50, and all the other parameters are kept to default values.

In case you got lost in the above details, the following flow chart will be helpful:

So when we look at those behaviors, although the first behavior is completely acceptable, the second behavior is not. While it might be perfectly sensible for some use cases, this is not the ideal behavior for a system that could expect sudden peaks, yet has the ability to scale as soon as it hits the peak without waiting for the system to be stabilized. While one could possibly argue that there should be more core threads in that case, the number of threads in the system under the usual operation (non peak) should be a fair amount, due to obvious contention issues caused by higher thread counts.

We at Adroitlogic, also encountered this same problem when we were designing Project-X, which is the core framework of our integration product stack. Since all our integration products are performance critical, we needed to get rid of this queue-first behavior of the thread pool executor and make it scale-first. So after trying out several alternative approaches, we came across the following implementation, which brought the expected results. 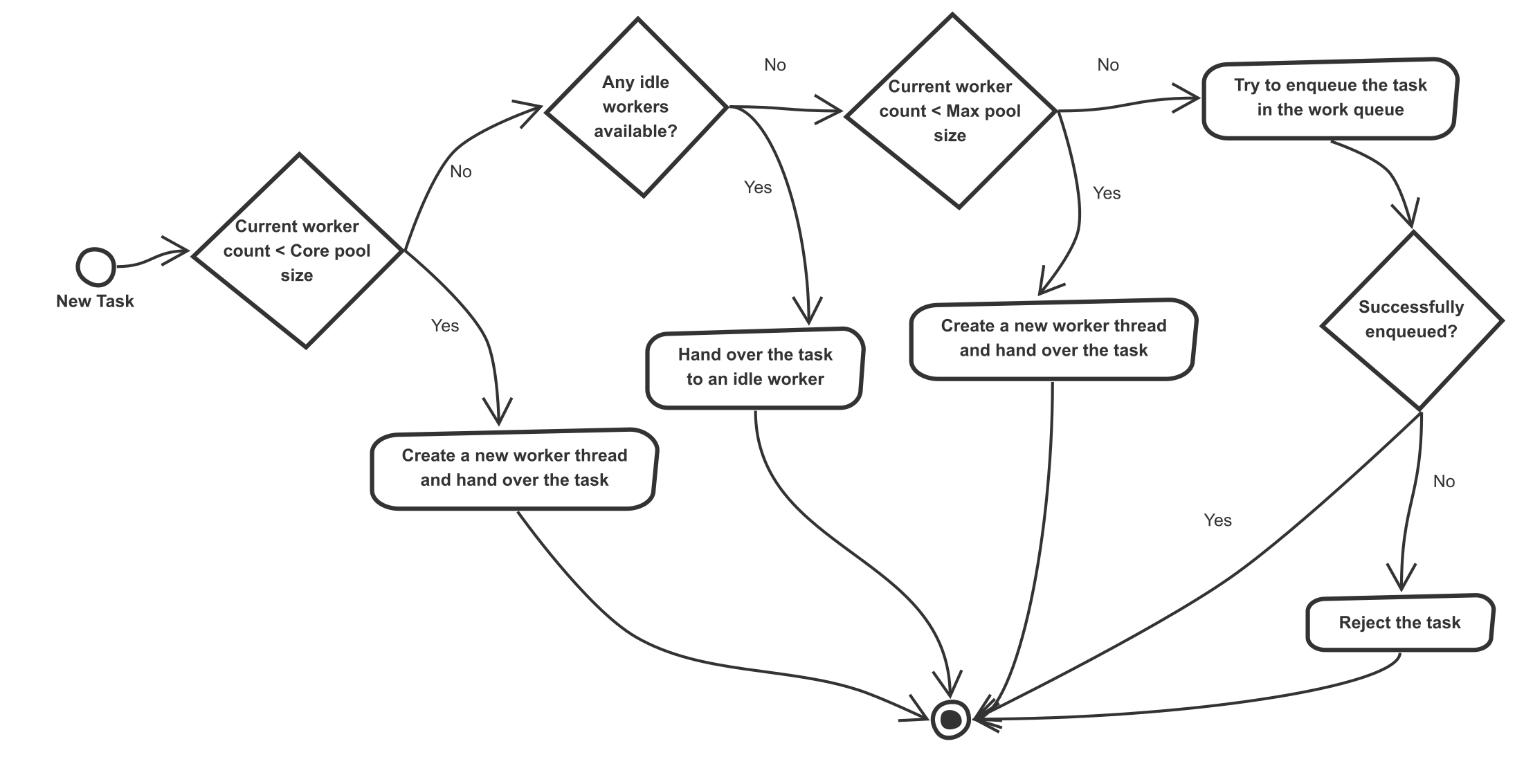 Understanding the Implementation of the Current Behavior

So as the first step, let’s go through Java’s ThreadPoolExecutor class to find out how this queue-first behavior is implemented. The following code block from its execute() method looks interesting:

The first if block is responsible for creating a new core thread for the newly submitted task if the current worker thread count is less than the core pool size. Since we are fine with that behavior, let’s move to the next if block.

Simply put (ignoring some rechecks performed to preserve the consistency of the thread pool), the second if block invokes the offer() method of the work queue with the task to be executed.

By default, when the offer() method of a BlockingQueue is invoked, it tries to enqueue the provided element (the task in this case) and returns true if successful. If the queue does not have enough space left to store the element, it will simply return false.

So in this case, if the queue has enough space, the task will be queued. If there are any idle worker threads available, they will be looking at this queue, and one of them will quickly grab this task.

Otherwise, the execution will be moved to the final else if block. That code block will first try to create a new worker thread to handle the task and if it failed (due to max pool size limit is reached), it will simply reject the task.

Modifying the Behavior of the Offer() Method

So from what we saw here, we can understand that by modifying the default behavior of this offer() method of the work queue, we can solve a major part of this issue. Conceptually, what we have to do is first check whether there are any idle worker threads in the pool. If there are any, we can try to enqueue the task so one of those threads can pick it up from there. Otherwise, we should return false from offer method, which will make the thread pool to create a new worker thread for the task.

The following two diagrams show the default behavior of the offer() method and our modified behavior.

So assuming that an AtomicInteger with the name currentIdleThreadCount contains the number of current idle threads, our new offer() method looks like below.

But unfortunately, there is no straightforward way to get the current idle worker thread count of the thread pool without introducing a performance bottleneck for the work queue. So now we need to implement a way to keep track of that, too.

To implement this, we basically need to identify a point where the status of a worker thread changes from idle to busy or vice versa. If we go back to the code of the ThreadPoolExecutor class, we can see that the getTask() method performs exactly that. Each idle thread executes this method to acquire a new task to be executed, and the following code block plays an important part of that.

First of all, let’s consider the scenario when timed is false. In this case, the thread will call the take() method of the work queue. So it is obvious that any thread that comes into the take() method is currently idle and, therefore, we can override the implementation of this method in our work queue to increment the idleThreadCount at the beginning. Then we can call the actual take() method, which could result in one of the following two scenarios.

Then let’s consider the other scenario — where timed is true. In this case, the thread will call the poll(long timeout, TimeUnit unit) method of the work queue with a timeout value. So here, it is also obvious that any thread that comes into the poll() method is currently idle and, therefore, we can override the implementation of this method in our work queue to increment the idleThreadCount at the beginning. Then we can call the actual poll() method, which could result in one of the following two scenarios.

So our overridden poll(long timeout, TimeUnit unit) method looks like below.

Therefore with these new implementations of offer(), take(), and poll(long timeout, TimeUnit unit) methods, now our thread pool will be scaled up when it has no idle worker threads to take up new tasks.

Now have we implemented our scale-first executor service? Unfortunately not. Our current implementation is a scale-only ExecutorService, which will only try to scale-up. Once it comes to the max pool size, it will reject the tasks instead of trying to queue them. So let’s fix that as well.

Please note that the rejectedExecutionHandler variable holds the original rejection handler of the thread pool. In order to guarantee the correctness of this implementation, we need to override the add() method of the work queue as below:

Now the implementation is all done and dusted and we have a perfect and very much real scale-first executor service on top of Java’s ThreadPoolExecutor.

Published at DZone with permission of Udith Gunaratna. See the original article here.