At TestProject we strive to use the most up-to-date best practices, and as part of an upgrade for some components and workflows in our infrastructure, we are partially shifting to Jenkins X. There is a lack of useful material available on Jenkins X serverless setup, so as part of our belief in sharing and giving back to the community we’ve decided to create a full-blown step by step tutorial on about it!

In this step by step tutorial, we are going to build a CI/CD solution for a modern cloud application based on microservices with Jenkins X.

Jenkins X is a CI/CD solution for modern cloud applications on Kubernetes. It helps us create great pipelines for our projects and implement a full CI and CD.

You may also enjoy: All You Need to Know About Jenkins X

Jenkins X automates the management of the environments and the promotion of new versions of applications between environments via GitOps.

GitOps is a software development methodology for Kubernetes cluster management and application delivery. When following this methodology, Git is the single source of truth for both the infrastructure-as-code and the application code. All changes to the desired state are Git commits.

Jenkins X automatically spins up preview environments for our pull requests so we can get fast feedback before changes are merged to master.

For the purpose of this tutorial, we’ve created a simple demo project with a microservice design that will be deployed on Kubernetes. Our demo project consists of 3 main services: A frontend application and 2 backend services.

Our demo project displays the current version of the backend services and its own. This will be helpful to illustrate and test the CI/CD pipeline that we are building later.

Our demo project services are written in Python and packaged into a Docker container based on Alpine image. The image below illustrates our demo project: 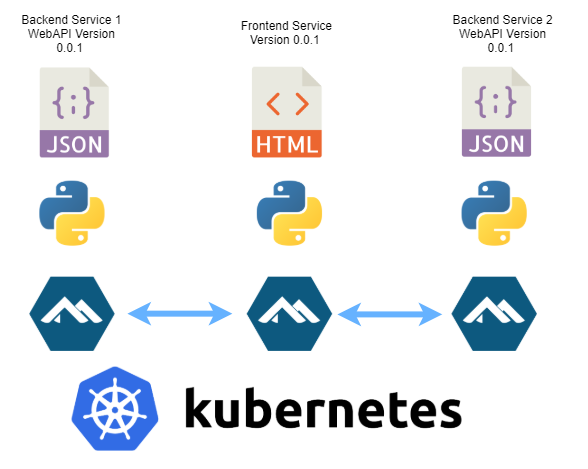 By the end of this tutorial, we will have a working CI/CD solution that will enable us to develop, test and deliver our application in a fast and reliable way.

Before we start the hands-on part of the tutorial, we need to cover the main components of Jenkins X serverless infrastructure. The image below illustrates these components: 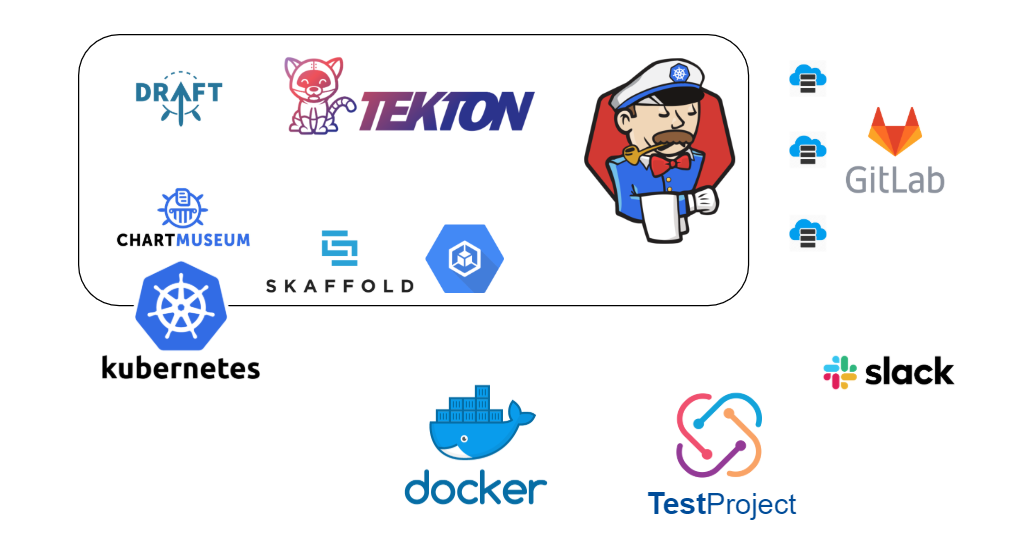 Let’s drill down a bit more:

Now we will install Jenkins X and use Google Cloud as our cloud provider, but the installation process is very similar to other clouds.

5. Run the following command to:

6. Now you will be asked a series of questions that will configure the installation:

That’s it! You are ready to start.

In this part, we will learn how to import an existing project into Jenkins X.

Before importing your project to Jenkins X, we need to understand what are the different environments created by default by Jenkins X. By default, Jenkins X creates the following environments:

The first thing you will need to do is fork the repository with the source code of your project, and then clone it to your development environment.

In this chapter of the tutorial, we will use the Backend1 demo project as an example. You should fork the main tutorial repository and run the following commands in order to clone it to your development environment:

Now you have a new repository to work with, but you still don’t have all the needed files for Jenkins X to work with it.

As part of the default import process, Jenkins X will go over the code and choose the right default build pack for the project based on the programming language. Our project was developed in Python so it will be a Python build pack.

You can view the contents of the build pack by looking at:

To verify the import progress, run the command below:

When the import is successfully finished, you will see that all the files that are in the build pack now appear in the project repository, the difference is that some of them were templates before and now they are legit files.

Let’s go over what happens behind the curtains of the import process:

The cool thing about this process is that all the changes are tracked in Git and can be viewed by going to:

In order to verify whether the service was deployed correctly to the staging environment, you can view the service by the URL that will be printed in the console at the end of the import process. For example, in our demo project Backend1, the following JSON should appear in your browser after opening the provided URL:

You can see that you get the name and version of the service, but what about unit testing? This stage is not included in the default build pack. To solve this, you will need a custom build pack for Jenkins X.

In this part, we will create a custom build pack for Jenkins X and include unit testing as part of it.

Build packs define how to build, test and deliver your project each time a developer makes changes to the source code of your project. Jenkins X provides basic build packs, but in real life, you need to create a custom build pack for your project.

It is recommended to keep your build packs in a central repository and share them between the developers in your company.

In order to create a custom build pack for the tutorial project, the first thing you need to do is fork the official repository with community build packs. Then, clone the repository to your development environment using the following commands:

It’s advised to add an upstream repository to receive future updates from the official repository, in order to stay up-to-date. Use the following command to do so:

Next, in order to create a custom build pack, we need to create a branch of the repository. Use the following commands:

Selecting the Source for Build Packs in Jenkins X

By default, the source of build packs is in the following folder:

To change the source to point to your newly created repository, run the following commands:

From now on, when you import a new project, Jenkins X will use the build packs from your newly created repository.

By default Jenkins X provides build packs for the popular development languages. As a base for our custom build pack, we will use the Python build pack since our project is written in Python.

Copy the Python build pack folder to a folder called tutorial-build-pack. To do this run the following command:

In order to implement unit testing in the custom build pack, you need to extend the basic build pack. To extend a build pack you simply need to modify the pipeline.yaml file that is located in the home directory of the build pack.

Let’s say you want to add a script that runs some unit tests before building the image. For the sake of example, you will run an echo command “Running unit tests!”. But in reality, you should run a command or script that will run your tests.

Now add a new step to the pipeline.yaml to execute the new script before we build our service. Use the following commands to do so:

In order for the changes to take effect, we need to commit our changes to the build pack. However, the newly created build pack is not associated with any project.

For the purpose of the tutorial, if you have already forked and cloned the main tutorial repository, then skip the next step and simply enter the Backend2 folder inside the repository folder.

If you have not already cloned the main tutorial repository, then run the following commands:

Now we have a new repository to work with. To import the new project with the build pack you’ve created, run the following command:

In order to check if the build was correctly executed with our new unit test, run the following command:

Congrats! Your unit tests are now being executed!

In this part, we will learn how to implement integration testing for the services that we deploy with Jenkins X.

In order to understand where to implement the integration tests, you need to understand their purpose – to verify that all the services in our production environment will communicate with each other in the correct way.

If you’ve followed the tutorial from the start, you should have a staging environment that includes: Two working services, Backend1 and Backend2. These services have no interaction with each other so there is no actual integration testing we can perform to verify that the services are communicating correctly.

To make the integration testing example meaningful, we will add a frontend service that interacts with both of the backend services.

For the purpose of the tutorial, if you have already forked and cloned the main tutorial repository, then skip the next step and simply enter the Frontend folder inside the repository folder.

If you have not already cloned the main tutorial repository, then run the following commands:

When the import is successfully finished, verify that the 3 services are up and running in your staging environment.

To verify that the 3 services are available, you can run the following command:

How to Execute Integration Tests with TestProject via API

TestProject is a community-powered test automation platform that is completely free. It is built on top of Selenium and Appium, supports all major operating systems, and enables every member of your software team to collaborate and test Web, Android and iOS apps, effortlessly. TestProject is the perfect fit for integration testing within a CI/CD pipeline, since TestProject exposes a RESTful API which allows R&D teams to schedule and trigger automation, get status and retrieve testing results. In addition, TestProject Agents can be deployed with ease on various platforms (both local and remote), including a dockerized version of the Agent that can be deployed serverless, which allows for parallel distributed testing on-demand.

Now let’s implement our integration tests! The first thing you need to do is to clone the staging environment repository to your development environment. Use the following commands:

After cloning the repository to your development environment, inside the home directory folder we can find a file called jenkins-x.yaml. This file describes the steps that represent the pipeline for the deployment of services to the staging environment.

In order to execute the integration tests after the build, we need to add the following commands to this file:

Now that we’ve added the commands that will execute the integration tests, we can push the changes to Git.

Congratulations, the integration tests will be executed every time anything is deployed to the staging environment!

You can verify this by looking at the build logs: