Regardless of how well I followed the official documentation, I honestly didn’t understand a single damn thing!

After watching some tutorials on YouTube, I was able to write and duplicate the tutorials, but a core understanding of Kubernetes networking concepts was still missing.

This blog post is my take on explaining Kubernetes networking concepts in depth and answering the following questions, which always confused me:

Throughout the entire blog post, we will assume the following.

Let’s start by answering the why.

Why Do We Need Services in the First Place?

K8s assigns an IP address whenever a pod is created. The command below shows you an example IP address of the Pod

Wouldn’t it be great if somehow a static IP address or a DNS name was assigned to the Pod? This will solve our problem.

That’s where the Service resource of K8s comes to the rescue. I know the name Service sounds deceiving. A Service resource doesn’t run our containers. It merely provides and maintains a network identity for our Pod resource.

This Service network identity provides both a static IP address and a DNS name. We just need to specify the ports on which the incoming request will be received and the port of the pod on which the request has to be sent.

Services listen on a static address that doesn’t change and forwards the request to the unreliable container address. It internally keeps a map that always contains the latest IP address of the Pod. So, whenever a Pod restarts, it updates that map automatically so you get a seamless connection.

Another benefit of using services is load balancing between replicas of the same application. With our imaginary application, because there are three instances of each microservice running on separate VMs, a service will load balance the request between the replicas of $Products_A$ $Proudcts_B$ $Products_C$.

Until now, we have understood what are services and why are they needed. Let’s check out the different services that K8s offers and their use cases.

How Do I make $Products_A$ Service Talk to $Reviews_A$ service?

ClusterIP Service to the Rescue

The following YAML defines a service of type ClusterIP

The important fields in this YAML are

Selector labels must match to attach a service to a pod.

The command below shows you the static IP address of the service which can be used by other Pods:

You can use the above IP address for communication between the $Products_A$ and $Reviews_A$ microservices.

There are two way to communicate using DNS.

Now you can pass these addresses to your microservice for communication.

Until now, we've understood how applications inside the K8s cluster talk to each other, but you made your application to be consumed by users on the internet. Let’s check out how it is done.

How Do I Expose $Products_A$ Service Over the Internet?

Every application that is deployed in K8s by default cannot be accessed over the network/internet. They need to be exposed Via a Service. K8s provides two Services to do just that:

The following YAML can be used to create a NodePort service:

The above YAML definition is very similar to the ClusterIP Service definition. The only field that has changed is the type field from ClusterIP to NodePort. When you create a NodePort service, K8s will randomly select any available port on the node/VM between 30000 - 32767 and listen on it for incoming requests.

You can specify the NodePort field yourself in the service definition, but you have to deal with the hassle of checking if the port is available on every node.

After creating the service, to get the port on which this NodePort service is listening for requests, use the command:

In our imaginary K8s cluster, this will happen on all the nodes:

K8s provides another service to expose your application called the LoadBalancer service.

The following YAML can be used a create a LoadBalancer service:

The above YAML definition is very similar to the ClusterIP Service definition. The only field that has changed is the type field from ClusterIP to LoadBalancer.

The LoadBalancer service is an abstraction over the NodePort service. What’s special about this service is that, if you are using a managed Kubernetes service like EKS(AWS), GKS(GCP), AKS(Azure), or any other cloud provider, it provisions a load balancer by itself so that you don’t have the hassle setting up a load balancer yourself.

After creating the service, to get the public IP address of the load balancer provisioned by this service, use the command:

But what happens if you create a LoadBalancer service on your local K8s cluster or configured your own K8s from scratch in the cloud?

The answer is: It won’t do anything. You will see a <Pending> state for the IP address section. The reason is that cloud-specific K8s clusters add other special programs/controllers that detect the LoadBalancer service creation and take the appropriate action accordingly.

One thing to note here: The LoadBalancer service doesn’t expose any ports by itself like the NodePort service.

LoadBalancer is a superset of NodePort, which is a superset of the clusterIP service, which means that, when you create a service of type NodePort, a ClusterIP service also gets created implicitly. So if you create a NodePort service for a $Products$ microservice, then this same service can be used for both internal communications by other pods and accessing the $Products$ service on the internet. 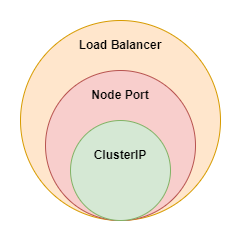 What Should We Use NodePort or LoadBalancer Service?

If you read carefully, you will observe there is not much difference between the NodePort and LoadBalancer service, except for some automation being done in the latter one.

Using a LoadBalancer service takes away the trivial task of configuring and provisioning LBs. Meanwhile, using a NodePort gives you the freedom to set up your own load-balancing solution, such that configuring environments that are not fully supported by Kubernetes, or even exposing one or more nodes’ IPs directly.

So it depends upon the situation you are in, but the general rule of thumb is to try to use the LoadBalancer service first, but if it doesn’t work for your environment, go for the NodePort service

That is it, these two services are used to expose your application outside of the cluster. But there is a slight problem.

If you want to expose more than one application, you end up creating multiple NodePort / LoadBalancer Services. This gets the job done but you have to face some consequences because with each NodePort service you need to deal with the hassle of manually managing the IPs and ports. And with each LoadBalancer service, you go on increasing your cloud bill.

No worries, K8s has addressed this issue with the use of Ingress and Ingress controllers.

How to Expose Multiple Applications Without Creating Multiple Services

An Ingress controller is just another K8s deployment resource (an app running in a container), but what is special about this deployment is that it provides a single point of control for all incoming traffic into the Kubernetes cluster.

With these, you can specify what request needs to be routed to which service in your K8s cluster on the basis of any request parameter, like host, URL path, subdomain, etc.

The following YAML can be used to create an Ingress resource:

With the above YAML, we have exposed two services. If a request comes from products.myapp.com and the request path starts with /proudcts, we send it to our products-app K8s Service, which in turn forwards the request to our container.

Similarly, if a request comes from ratings.bar.com it is forwarded to ratings-app

The important fields in these YAML are:

An ingress resource should be created in the same namespace where the corresponding K8s Service resides, but an ingress controller can be placed in any namespace. It will automatically detect Ingresess defined in other namespaces on the basis of ingressClassName.

An important thing to remember is that an Ingress by itself doesn’t expose any port. In the end, it’s just a K8s deployment resource. You need a service(NodePort/LoadBalancer) in front of it to expose it.

Congratulations on sticking around until the end. Let’s summarize what we have learned so far. Kubernetes gives us three types of Service Resource Object