There is a cycle in a linked list if there is some node in the list that can be reached again by continuously following the next pointer. Internally, pos denotes the index of the node that the tail's next pointer is connected to. Note that pos is not passed as a parameter.

Return true if there is a cycle in the linked list. Otherwise, return false.

Let's imagine a running circle.  And then, we add two runners to this circle.

If one of the runners is faster, it is obvious that the fastest runner will catch up with the slowest.

I'm going to use the same principle in my algorithm. I want to prepare two runners; slow and fast. After it, we should iterate till the end. Do you understand what it means 'end' in our case? We have two endings: the list has a cycle, and pointers will meet, and we have a null at the end of the list.

Our next today's problem is...

This problem can be tricky, but I will explain a few algorithms to solve it.

For example, we can iterate over the list and calculate the size of the list, and then iterate to the middle element =) Super simple.

In the second variant, we can use the same approach as in the previous problem; two pointers.

Sure, don't forget about the borders. It is extremely important to check fast pointer is not null and fast.next, not null.

Given the head of a sorted linked list, delete all duplicates such that each element appears only once. Return the linked list sorted as well. 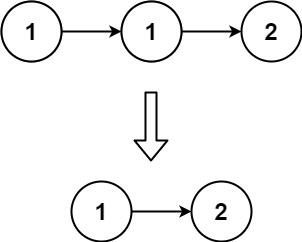 The main trick in this problem is to understand how we can eliminate duplicate elements. Also, we should check the borders. In this algorithm, we will check the current element and the next one. If elements are the same, we should set cur.next to cur.next.next. Is it clear? you can ask me in the comments.