Start-ups flash fast, often to fizzle and fade into nothingness. After the hype is gone, the developers move on, and capital is recouped, there's nothing left but the shadow of the once-was-new first idea. 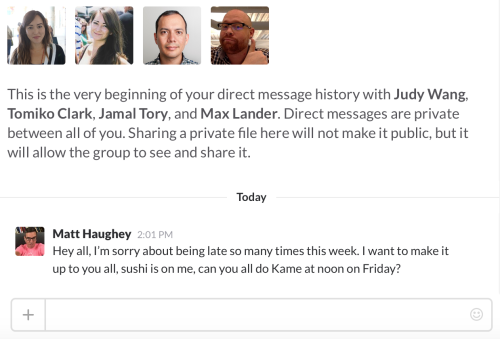 Slack is different because it isn't new. It isn't a new mode of working: every capability and feature that Slack has, it got from somewhere else.

So what's the secret behind the newest darling of the tech industry, from its remote teams to the high-rises and board rooms?

To get to that answer, we'll ask a question: doesn't Slack present a concept darn similar to something from days gone by?

When I was but a sprite in the eyes of my designers, there was a thing called IRC (Internet Relay Chat, for those of you new to internet...and chatting).

As you can see from the illustration at right, mIRC is a feature-rich, powerful, extensible, menu- and icon-filled Noah's Ark of an app. (I know because the icons tell me so.)

So why did mIRC die a slow and unnoticed death while Slack was able to reach rampant adoption-levels in a fraction of the time mIRC has existed?

Those icons—I have no idea what they mean. The burden of caring enough to find out scares me.

It's overkill. Every feature and function can be controlled at a very granular level. You can even write your own bots for it, to carry out routine administrative tasks or play Uno.

In a phrase: User Experience. While the term has been over-used and somewhat evacuated of meaning, Slack proves that this concept still has legs.

Slack is delightfully irritating. It bugs you in the most pleasant ways. It's ephemeral and easy. It doesn't make you think. It relies on recognition and convention rather than memorization and recall. (To be fair and balanced, Slack leverages appropriation appropriately here.)

So Slack is the answer to one simple question:

What happens when familiar and obvious capabilities are re-packaged with insight?

Case in point: I could have made you wade through descriptions, technical specifications and comparisons, red-line diagrams, interaction heat maps, and task flow analyses.

But you probably read all you really needed to, or wanted to, rather easily.

And now you can go on with what you were doing. Isn't that the point?