MongoDB is a document-based database management system commonly used for high-volume data storage. It is an easy tool to manage data and was developed to substitute the MySQL structure, as the growth of data required new tools for its management. MySQL became outdated for its lack of flexibility for reformatting data structures. The problem lies within a table-based design, as it makes the set of multivariate search queries finite. Enterprises rely on a combination of structured and unstructured data for business decisions, giving MongoDB rapid growth.

MySQL is a table-based system or open-source relational database, while MongoDB is also called an object-based system. A table-based design is the data query structure for search, where all data is related to another data point or set. Data in MongoDB, on the contrary, is non-relational. Instead of using tables and rows, MongoDB makes collections and documents. The documents are formed from key-value pairs – the core units of the system. Unlike rows, documents can store information that is complex in structure. Sets of documents and functions are united in the collections, which can be equivalent to relational database tables. MongoDB allows you to represent store arrays, hierarchical relationships, and other more complex structures.

MongoDB Is a NoSQL System

MongoDB is a non-relational system is known as a NoSQL database. The main unit of data for search is a document, which makes MongoDB an object-based system. It employs binary JASON language, which is effective for data complex in structure. MongoDB's way of storing data is similar to JSON, although JSON is not formally used. For storage, it uses a format called BSON – JSON-like documents binary coded into smaller files. It makes the data management process faster. MongoDB also uses MongoDB query language, considered to have a more flexible structure. Many businesses prefer the MongoDB database system for its structure. The information is ordered with the help of a dynamic ‘schema’ design, which makes the system flexible and fast. While structured data is organized upon a defined schema, unstructured doesn’t follow any pre-defined model. The first wins in terms of quantity, but the unstructured stands for quality.

Structured data easily fits into organized fields or columns. They may be as follows: Name, Address, Account Number, Order Amount, Price. As the steam is so well-defined you can query and analyze the data easily. Unstructured data is more difficult to structure and store. It may include messages, videos, photos, webpages, and audio files. You could never be sure what you would see if you used traditional tools to query for video, as there is no definition for any of it. As well as there is no defined structure for social media feed as people express themselves freely with no rules for standardization. That’s where ordinary query tools don’t work.

According to IDC, 90% of extremely large datasets are unstructured, that why Mango DB is a tool that is worth implementing into your work with Big Data. In my previous article, I explained the difference between MongoDB, MySQL, and PostgreSQL.

When It’s Perfect To Use MongoDB

According to The McKinsey Global Institute research companies, that are driven by data are 23 times more likely to acquire customers, 6 times as likely to retain customers, and 19 times as likely to be profitable as a result. Furthermore, the amount of data produced by enterprises themselves is increasing up to 55-65% yearly and the majority of it is unstructured. Thus finding a modern tool for managing data can be vital to your business not only in terms of modernization but also in terms of future success. There are some examples of where it is vital to use the Mongo DB database. 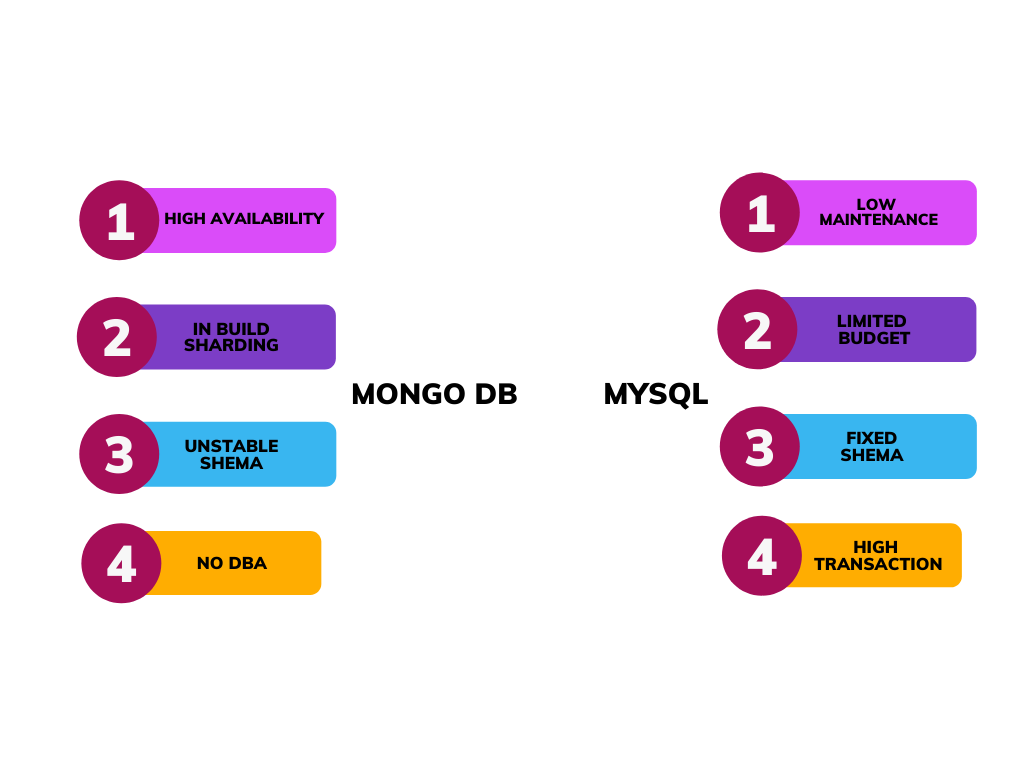 Legacy modernization is a step to applying innovations to your business and how it deals with big data. If you are to merge numerous data sources, the document model has the flexibility and power to create a single unified view in ways that other databases are unable to provide. Modernizing will help your scale applications effortlessly, build business functionality 3-5x faster, scale to millions of users, and cut costs not less than 70%.

The modernization process requires people, a well-organized process, and technology. All this, except for the team of developers, can be provided by MongoDB. It provides you with advisory consulting, program governance, and application lifecycle expertise. Furthermore, it gives you inventory and characterizes the app portfolio, defines project scope and execution, as well guidelines for design, implementation, validation, and optimization. Data document model accelerates development productivity, distributed systems design helps to scale always-on apps and you and the technology itself.

Content management systems handle large-scale unstructured data in real-time and serve content to a variety of applications. This requires the implementation of the most current database technologies and solutions, which are able to manage unstructured data. MongoDB provides storage and is appropriate for any type of content within a single database.

There Are Several Reasons To Use It for Your CMS:

Flexible data model: you can incorporate any kind of data from any source, you can also make frequent updates to the database without downtime to your application;

Scalability: MongoDB has a horizon scale architecture, which makes it easy to harness additional functions as your audience grows;

Lower cost: you don’t have to spend a budget on hardware to scale the system and Mongo DB is easy to work with, so it also maintains the performance of your teams.

High-query Sites and Applications, Such as Analytics Apps

Mongo DB is second to no tool to build high-query sites and applications. First of all, it is suitable for managing data of any kind. Regardless of what type of data you need to organize, whether it’s numbers, objects, or geospatial data, the database system provides the manipulation of data without incurring additional procedures from the client side. Traditional databases are not suitable for this, as they enter designed to address small data volume and consistent data structures, as well as fewer updates. Mongo DB can also provide real-time updates which is a useful tool for any kind of analytics app and site, dealing with financial analytics, social media, gaming.

Why It’s Better To Use MongoDB in the Cases Above?

There are several benefits of Mongo DB that complement any type of manipulation with unstructured data.

A relational database uses a schema to describe any functional element, which includes tables, rows, views, indexes, and relationships. MongoDB operates without a schema. It means that it can accept, store, retrieve, and query any data type, as well as it makes almost no changes to your original data.

You can allocate work to different machines, as collections are self-contained and there’s no need to bring them together across nodes. The scale-out can be achieved through sharing and replica sets. Sharing means that a subset of the overall data is spread to a certain node, while replication means that the dataset is duplicated. Thus you are able to create an application that will handle spikes in traffic as your audience grows.

The Level of Consistency Is Variable

In Mongo DB you may regulate the level of consistency according to the value of your data. Different combinations of reading and writing concerns provide different causal consistency guarantees. If you seek faster performance reduce the inserts to Mongo DB. Replicating the inserts to the multiple nodes before returning makes the consistency higher, though slows the performance.

Mongo DB is free to use and can run on  Linux. The charges may be provided for specific tools, which are not always needed.

Companies That Are Using MongoDB

With the help of MongoDB Forbes built a CMS just within 2 months. It took one month to develop a new mobile site. With the help of the database, it gets more insights into the articles shared through social media, thus being able to capitalize in real-time on the viral aspect of the content.

eBay built a media metadata storage for their web properties with the help of MongoDB. The technology was also used by Pearsons to develop a cloud-based learning management system. Carfax created MongoDB CMS, modernizing their legacy, and discovered that they could provide service to 10x more customers as a result.