While implementing new ideas or new features in an existing system, most organizations are unable to decide what strategy to adopt for developing their product or evaluating the idea and its feasibility. The results every organization expects are a satisfied customer, the right transformation of ideas into an actual product, and better ROI.

The three fundamental strategies that organizations go for to achieve this in an initial stage are Proof-of-Concept (PoC), Prototype, and Minimum Viable Product (MVP). The dilemma when choosing an MVP, PoC, or Prototype can at times lead towards an incorrect selection. By doing so, an organization may end up leaking their finances, wasting their effort and time, and it may affect business growth overall.

Each of these can be used independently or together depending on the project roadmap. All three of these approaches have their shades of features, objectives, operations, and benefits. Let us first understand each of them and then move towards comparing them with each other. 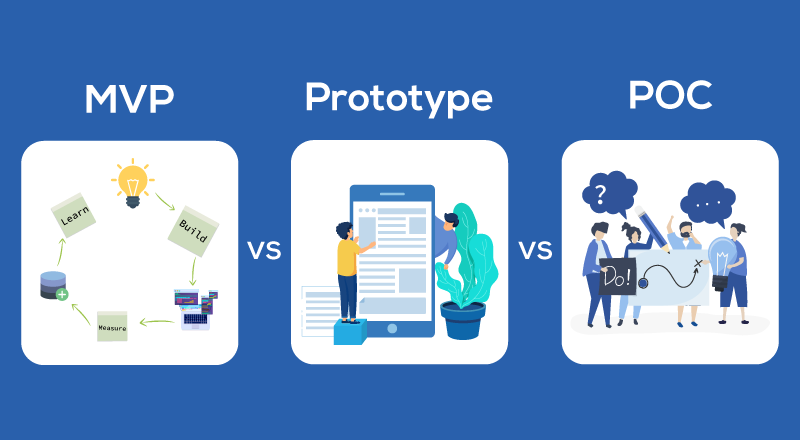 As its name suggests, this can be the best approach to verify the uncertain idea or the concept’s feasibility for the practical implementation. It is used before the actual development of the product and before the product is launched in the market.

For developing a PoC, a small project is implemented to verify whether certain concepts can be implemented (both in terms of business models and technical capabilities).

A PoC is usually not shown publicly or to the customer. It may not be usable at all since its major focus is to verify if the fundamental idea is operationally workable or not. Building a PoC needs a good amount of time and effort for the development. It helps you assess whether the project will run flawlessly or not, based on the initial study. PoC is all about testing whether the concept will work further or not. If not, it might as well be aborted at the start.

A PoC usually is made to depict an area of the system, so certain projects may need multiple POCs to showcase different components. If the PoC is successful, the project may move ahead, take a different route or may even stop. In the case of a positive PoC, there are higher chances of getting initial buy-in from stakeholders with further financial help build prototypes. A PoC may or may not be reusable, fully secure and scalable as it is used to validate the idea and its feasibility.

When Do You Need a PoC?

PoC is needed when you are not sure or are uncertain about the acceptance of the idea. It might be because you are trying to implement an original and fresh idea or you are trying to provide some cost-effective product which was earlier done with high investment. Whatever the reason is, a PoC will provide you a clear picture about whether your idea is viable or not.

“A prototype is an early sample, model, or release of a product built to test a concept or process or to act as a thing to be replicated or learned from” – Wikipedia

A prototype focuses on determining how the product will be done, its look and user flow. It is an important aspect of the project as it helps in understanding the fundamental project workflows, their usability, and special features to be included. It is an interactive model of the system that allows users to visualize the experience in a better manner. Though it may not be a standalone system, it does give a clear idea of how the product would look. Initial errors in study and designing can be pointed out to keep them from being in the in the final product.

Prototyping is an appreciated method of visualizing how your product will function and how it will be received by the end-user and business users. It describes the flow and gives an inclusive idea of the design and layout of your desired system. A prototype usually includes wireframes (paper, interactive), design layouts, mock-ups, and user flows. It could be a working prototype, visual prototype, user experience prototype, and functional prototype.

Key Features of a Prototype

An MVP is a functional product that has enough features for it to be shipped to its initial set of users. Starting from a basic concept to reality, an MVP is a standalone and primary system on its own. It represents the fundamental version of your system catering to a small set of users and is offered to them for further usage and comments.

Eric Ries, the author of The Lean Startup, defines an MVP as "that version of a new product which allows a team to collect the maximum amount of validated learning about customers with the least effort."

Implementing an MVP has its own set of benefits, like sensible pricing, faster time to market, reduced risks, immediate value, minimal development costs, and augmented flexibility. The MVP process helps you verify product feasibility, team assumptions about the product, usability, and market demand. It facilitates in building a product that has minimal features and iteratively helps in building a better version of the product by leveraging end-user feedback and come up with the best decisions. Stagewise, the product evolves and offers maximum ROI with increased maturity. Here are two of the known examples that have seen success based on this model:

When Do You Need An MVP?

Generally, an MVP is the right choice if you want to check the demand of your product, analyze the behavior and preference of your target audience and want to release the product in a short time with minimal features.

Key Considerations Prior to Developing an MVP, Prototype or POC

Prior to deciding whether you need to develop a prototype, PoC, or MVP, there are certain questions which need to be clearly answered and perceived. Once the answers to these questions are well understood, the decision to choose from these three is surely a correct one.

When to Choose Which Method

When it comes to choosing among these three becomes quite tricky. Here is a list of certain parameters, pre-conditions, questions that can help choose which one would fit the bill.

The above checklist is designed to cover most possible conditions, but some organizations may feel the need for a combination of the above. In such cases, a mechanism can be worked out that can take two of them and implement them one after the other, as the situation demands.