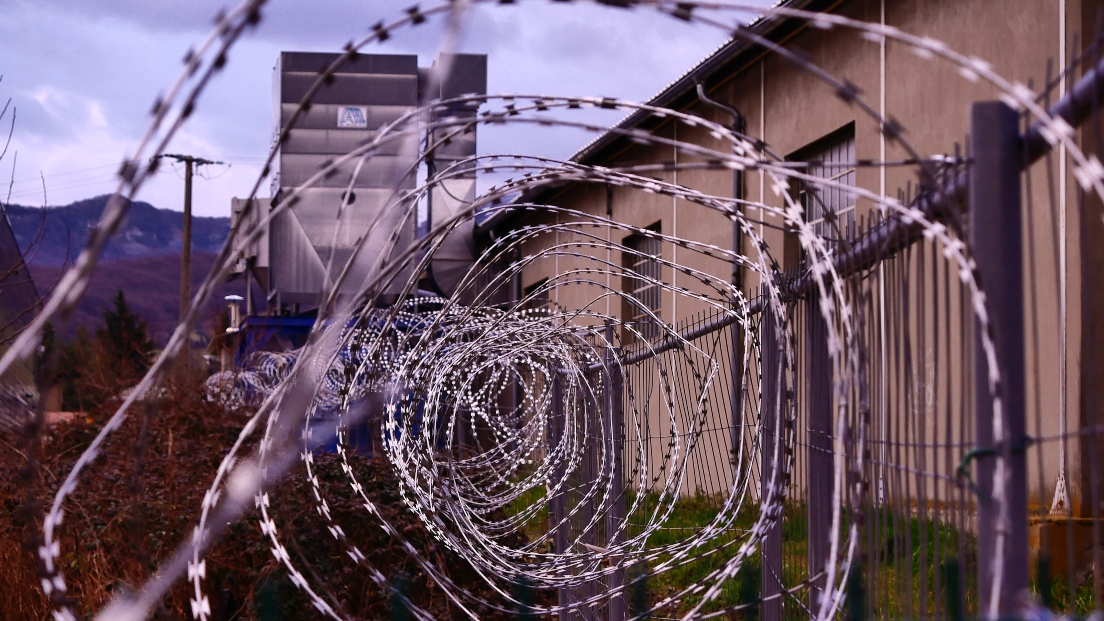 Istio supports Token-based end-user authentication with JSON Web Tokens or JWT. In terms of Istio, the process of authentication of the end-user, which might be a person or a device, is known as origin authentication. Istio allows you to validate nearly all the fields of a JWT token presented to it. Since JWT is an industry-standard token format, the origin authentication feature of Istio is compatible with OpenID connect providers such as Auth0, Google Auth, and Key Cloak.

To understand origin authentication in detail, we will generate a custom JWT and discuss the steps involved in granting access to a microservice to a valid user. You should have access to a Kubernetes cluster with Istio installed to work through the demo. For local development, Docker Desktop for Windows or Mac is my preferred option.

At the time of writing this article, I am using Istio v.1.3.2 on Kubernetes v.1.14.7. If the configurations that we discuss here vary for you because of a difference in the versions of Kubernetes or Istio, then you will have to make suitable adjustments.

You may also like: Configure an External Identity Provider for Single Sign-On in a WSO2 API Deployment.

Our cluster hosts a service that should be only accessible to authenticated users. One of the endpoints of the service, named headers, should only be accessible to privileged users. To distinguish a privileged user from other authentic users, the identity provider of the application adds a property, named role, with value, header-reader, to the payload of the JWT token that it issues to the privileged users. Only the users with a valid token and role set to the value header-reader should be able to access the headers endpoint of the service.

The specifications and source code used for building this demo is available in this GitHub repository: https://github.com/rahulrai-in/custom-token-istio-auth.

Let’s now proceed with deploying our service to the mesh.

For this demo, we will use the containerized version of a popular HTTP request and response service from Postman, called HTTPBin, as the service that we intend to secure. The source code and documentation of this service are available in this GitHub repository.

To gain familiarity with the HTTPBin service, try hosting it in a Docker container using this container image and send a few HTTP requests to it.

Use the following specification to deploy the HTTPBin service to your Kubernetes cluster and expose it to the internet using an Istio ingress gateway.

As evident from the specification, the virtual service httpbin-vservice is responsible for directing the traffic that it receives from the gateway transparently to the service, httpbin-service. Let's apply the specification to our cluster by executing the following command from our terminal.

Currently, no access control policies are in effect and, therefore, you can access the API without any restrictions. Execute the following command from your terminal to send a request to the headers endpoint of the API.

Note that Docker Desktop exposes the gateway, istio-ingressgateway, at the address localhost:80 (or 127.0.0.1). The IP address of the ingress gateway may vary based on your choice of Kubernetes hosts, such as minikube, AKS, and EKS. To find the external IP address of ingress gateway on your host, execute the following command.

The output of the previous command presents the external IP and ports on which you can communicate with the ingress gateway.

The following diagram presents the high-level workflow of authenticating a client with an external identity provider, such as Google Auth to grant access to a secure service. 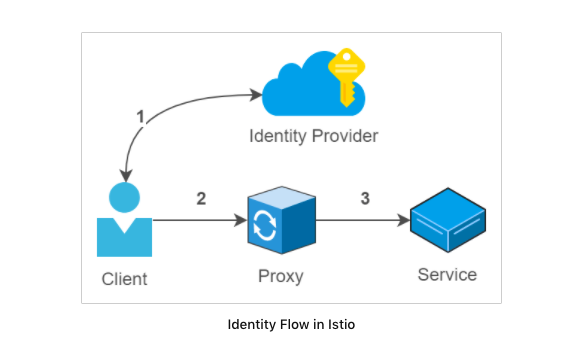 Let’s visit each of the steps outlined in the diagram.

Each JWT carries a signature that can be verified for legitimacy by the proxy using the corresponding public key of the private key used to sign the token. The standard procedure of sharing public keys of JWT issued by an identity provider to the server is to publish them on an API endpoint accessible to the server in the JSON Web Key Set (JWKS) format.

The JWKS endpoint is a read-only endpoint that represents a list of JWKs. A JWK, or JSON Web Key, is a JSON object that contains the cryptographic public key and other properties of the key. You can read more about the syntax of JWK and JWKS in the IETF RFC spec here.

The following are the JWKS endpoints of Google and Microsoft:

To generate a JWK that we can use to publish JWKS, you can use one of the several command-line tools, libraries, and node packages available online. Since we require asymmetric encryption of token signature so that Istio proxy can validate the JWT signature with the public key of the cryptography key pair, we will use the RSA algorithm for encryption. We will follow the following workflow to generate valid RSA keys and JWK.

In the source code of this application, you will find a folder named generate-jwk, which contains a shell script named run.sh that can carry out the first three steps of the workflow that we just discussed. The following code listing presents the commands present in the script, along with inline comments that describe the purpose of each command.

The following screenshot presents the output generated from executing the previous script on my system.

The execution of the shell script generates a JWK in a file, private.jwk. The only fields of the JWK that we require in our public JWKS are the key type (kty), whose value is RSA, the RSA public key modulus value (n), and the RSA public key exponent value (e).

Copy the three values and paste them in the file named jwks.json that is present at the root of the repository. The file jwks.json contains the JWKS that we intend to expose to the Istio proxy for authentication, and therefore, we need to upload the file to a publicly accessible location. For this sample, I am going to use the raw GitHub location of the jwks.json file so that Istio proxy can easily access it.

The previous policy instructs the proxy to verify the issuer (iss), and audience (aud) field of the received JWT before forwarding the request to our service httpbin-service. I have also specified the location of the JWKS document that we created previously as the value of the jwksUri field. Apply the previous configuration to the cluster with the following command.

If you try to send a request to the service now without a valid token, you will receive an unauthorized response.

Let’s now generate a valid token that we can use to make a successful request.

Although there are many libraries available for generating JWT tokens, I prefer to use the online JWT generator JWT.io for a one-off token generation or to validate an existing token without parsing it programmatically. Let’s head over to the website JWT.io and create a new token by following these instructions.

The following screenshot illustrates the previous workflow in action. After adding the values to the relevant fields, JWT.io will generate a JWT for you to use. 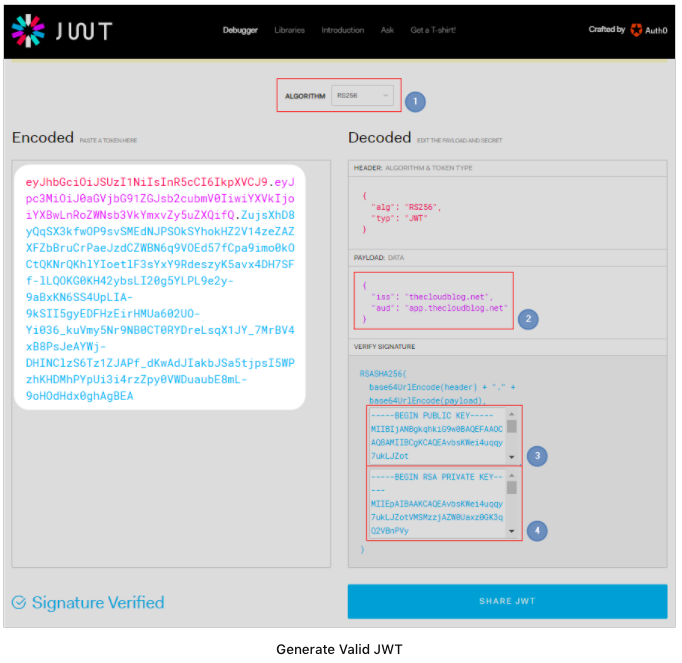 Let’s copy the token and save it in a file named authN-headers.txt in the following format. Replace the placeholder text {TOKEN} with the actual token value that you copied from the website.

We will now send another HTTP request to our API that includes an authorization header read from the file that we just created. From your terminal, change to the directory where you created the header file and execute the following command.

The output of the previous command shows how Istio intercepts a request and carries out authentication checks before allowing the request to reach the destination service. Try to execute the previous command with a different token that does not meet the issuer and audience constraints, which should return an unauthorized response from the Istio proxy.

Let’s now enable RBAC on our service, such that only the principal with the role header-reader can access the endpoint. Configuring RBAC in Istio requires creating two objects as follows.

You can enable RBAC on all services within the cluster. However, such an operation may disrupt ongoing operations, and therefore, a more appropriate migration strategy is to enable RBAC on a namespace or a service such that any communication with the service or every service in the namespace requires RBAC. The following specification enables RBAC only on the httpbin-service.

Next, we will define a ServiceRole, named header-reader, that will grant principal access to the headers endpoint of our service.

Finally, we will bind the ServiceRole to request attributes with ServiceRoleBinding with the following specification.

The previous specification will instruct Istio to read the claim named role from the principal created from the JWT token, and, if its value matches the text header-reader, then it will assign the principal the role header-reader that we defined previously.

Let’s apply these settings to the cluster using the following command.

Let’s now generate another token from JWT.io by following the same steps that we followed earlier for generating an authentication token. However, this time, we will use the following payload content for generating the token.

The following is a screenshot of the token generation process with the change highlighted. 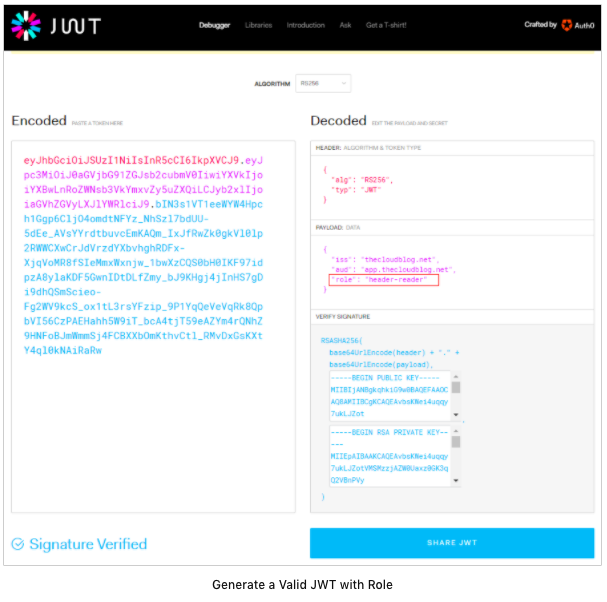 Just like we did earlier, we will save the token in a text file named authZ-headers.txt and execute the following command to invoke the headers endpoint with the new header.

Next, try replacing the value of the payload attribute role with some other value and compare the response with what you just received.

Istio supports integration with OpenID connect providers that can issue JWT tokens to authenticated users (persons or systems) so that only authorized users can access the services in the mesh. RBAC policies can encompass the whole mesh, or they can be scoped to an HTTP verb on an endpoint, which grants the developers absolute control over access to the services. Moreover, configuring access control does not require making any changes to the underlying application.

I have covered the topic of authentication policies in Istio in detail in my upcoming FREE title on Istio. This article is an extension of the same topic. If you want to be among the first ones to know about the launch of the book, subscribe to my blog and follow me on Twitter @rahulrai_in.