Red Hat Openshift is a Platform-as-a-Service — PaaS — that delivers things like build and deployment of Docker images over Kubernetes and many other resources. HashiCorp Terraform is a tool to implement Infrastructure-as-Code with many types of providers.

The platform is defined by code, this code is managed by Git, built, analyzed, and versioned by the CI tool, and deployed by Terraform. If we used build or deployment offered by Openshift, the lifecycle will be managed outside of our platform-as-code pipeline, and we would not be able to reproduce the right state, or we would never know what the right configuration is. These problems are maximized if our team uses the web console.

HashiCorp Terraform is a tool to implement Infrastructure-as-Code that offers many providers for infrastructure deployment. You can look at the documentation here.

There is no specific provider for Openshift, but there is one for Kubernetes, and we will use this. In fact, Openshift exposes the entire REST API of Kubernetes.

To install Docker properly, follow the instructions for your operating system.

Up the Openshift Cluster

For this article, we will use Openshift Origin, which can be up by following these steps.

In Debian, edit /lib/systemd/system/docker.service and add this configuration to the end of the line which starts with ExecStart.

The file will look as follows:

Now you are ready to up the Openshift Origin cluster. To do this is very simple, just type oc cluster up.

If you got the output below everything is OK, but if you have any issues, read the official documentation.

To illustrate a real use case I will deploy the platform for an app written in NodeJS with the following resources:

To address the route creation, we use an Openshift JSON definition and deploy it using Openshift CLI.

It’s possible to classify the resources created in Openshift by the longevity of the lifecycle. I can see three: long, short, and ephemeral.

The high level of segregation of resources in the cluster, commonly known as Project on Openshift ecosystem.

Volumes are persistent storage to mount in containers and used to save data.

This is the way that Openshift exposes the app to the outside world.

Used to balance the load between Pods. Pods are instances that can accommodate one or more Docker containers. As a best practice, use just one container per Pod.

Used to store credentials, certificates, or sensitive data and consume them through volume mounts or environment variables.

Configmap stands for Configuration Map; they can be consumed as environment variables or volume mounts.

This is our main resource. Replication Controllers are responsible by the number of replicas and auto-scale the Pods, creating them using template.

To manage the environments, we use the pipeline (to get deep, read this awesome article written by Kief Morris). In a few words, we have one definition to apply in development, UAT, and production that will be parametrized through the pipeline stages.

The strategy used to address the environment segregation is one cluster, separating the development, pre-production and production environments using namespaces. In other words, distinct namespaces (projects) within a cluster. Get deep here.

To run the pipeline, I choose Jenkins with a Pipeline plug-in.

All resources belong to the same repository with the following layout.

When you have distinct sets of resources per environment, one for development, one for pre-production, and another for production, put them in separate subdirectories in the repository.

For enterprise environments, I suggest putting the namespace, resource quota, and limit range files in another repository for governance purposes, and for secrets, use a vault tool like HashiCorp Vault. But these are subjects for another article.

Terraform has variables placeholders; use them to parametrize your resources. I use them to fill metadata annotations and label selectors because they are very common fields in Kubernetes resources.

For conversion, I suggest you adopt a manifest file to publish metadata like version and name of the project. Name it package.tf and use the Terraform variable notation.

Below, you can see an example of a manifest.

The Terraform provider for Kubernetes does not have a definition to manage route creation because routes are native to Openshift, but we need to expose the app to the world. We use routes to do this and we process this resource on our own in the pipeline.

In every deploy, use oc create -f route.json to create the route because it’s not possible to manage the state of this resource unless we implement something similar to Terraform tfstate.

We do the setup of the Kubernetes provider using a file named configuration.tf.

All the code is available here.

To implement the pipeline, we use the Jenkins Declarative Pipeline, which is amazing and has a lot of tools and plug-ins. To perform the deployment, we use Rundeck with some custom shell scripts.

Another important aspect is the workflow used to work with Git branches. I am a fan of Gitflow — A Successful Git branching model — by Vincent Driessen and, because it’s a robust branching model, the pipeline is modeled to work side-by-side with Gitflow.

In the build, we inject metadata in the variables.tf, like build date, build id, build name, Git commit, Git branch, etc, and create the versioned package to perpetuate it in the artifact server.

The package is a tar gzip file, created using the command below.

It’s necessary to exclude Git metadata, Jenkinsfile and some pre-existing tar files, and the package-name.tar.gz should be a variable with the correct name and version of the package  created in the setup stage.

To publish the package, I use just the curl to directly call the upload API.

The username:password is the credential that has access to the upload API, which you should replace with the real one.

This is responsible for getting the versioned package, extracting the content, identifying the environment, injecting the deploy metadata in variables.tf, processing the route.json, and proceeding to the deployment running the terraform apply command and oc create.

At this stage, a call is made to the Rundeck API, passing as parameters the versioned package, the build number, and the job name, and following the execution log to get the success or failure status.

To perform this operation, I developed a shell script that triggers and follows the execution of Rundeck Jobs. See it below:

As I said, we have an approval stage, and at this point, the pipeline stops and waits for user input to proceed or abort the deployment to production. This stage just executes when the sources are from the master branch.

Tests are very important to guarantee the integrity of the deployed platform, checking some key points and determining if all is as expected. For now, I will just show you simple tests, but in another article, I will get deep into infrastructure tests.

There is one stage for testing: Acceptance Testing.

There are many tools to perform tests, but nothing specific to test a deployed platform in Openshift or Kubernetes. I chose Cucumber- more precisely, cucumber.js.

To work properly, it's necessary to have a combination of tools installed and configured as a slave node in Jenkins:

Basically, I wrote the steps calling the Openshift CLI, querying the deployed platform and getting JSON files that are parsed and tested using the Cucumber engine.

First I wrote the features using the Gherkin syntax.

The scenario below is defined to test if all pods managed by a replication controller have the status running.

Second, I wrote the test code: a JavaScript file that implements the steps defined for each scenario.

The example below shows how I address the tests using native calls to Openshift CLI and get the returned JSON, parse it, and do assertions to validate what is defined.

Third, run the tests! When this command is run and ends with success, a JSON report will be generated and archived in Jenkins.

All the test files must belong to a Git repository with the following layout:

Now, let me explain the basic flow and tool interactions used to implement the pipeline, from the platform coder workstation to running the platform within Openshift. 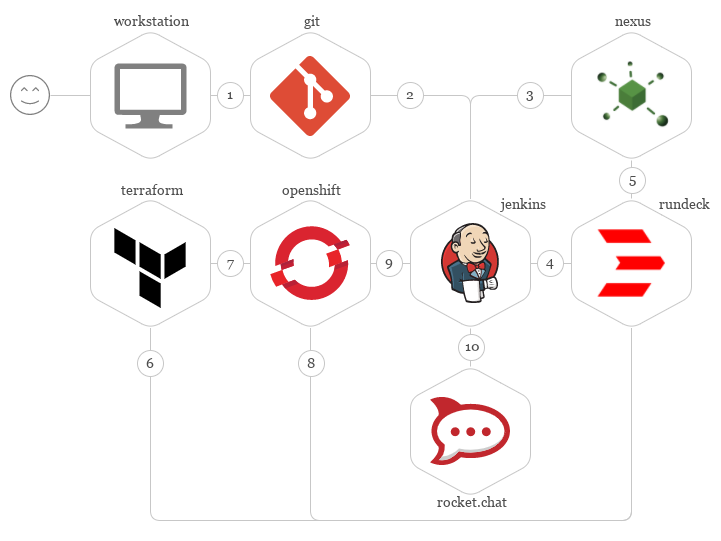 This is the high-level description of the main functionality implemented in the pipeline for deploying the platform-as-code, coded using Terraform Domain Specific Language — DSL.

Now, see the complete Jenkinsfile file with Pipeline declarative syntax used to build, test, and deploy the platform code. I’ve put comments in strategic lines if you want to understand the details.

As you can see, there are some more stages for notifications that send messages to Rocket.Chat and the team get details without accessing the Jenkins web console, like status, version, branch, etc.

The Jenkinsfile is another file that could belong to the Git repository, as below.

These are my observations and experience from fieldwork with Openshift in corporations.

Now, if you are building something similar to this or have any comments, questions or improvements, I’d love to hear from you.

Get the code here: https://github.com/fabiojose/platform-as-code-example