While performing Selenium test automation, you’d often come across scenarios where you’d need to handle frames or iframes. Frames are used to split the content into horizontal and vertical splits, while iframes are used to embed content on a web page.

Difference Between iFrames And Frames

Frames are used for horizontally and vertically splitting of the screen while iFrames are used to insert content from other sources, such as advertisements on your websites.

The frame is an HTML tag used to split the same web page or domain into separate frames /or windows.  Frames are used along with framesets, the < frame > tag in a web page defines each of the frames inside the frameset file tag and so we can say that the framesets include several frames.

In Protractor, you can handle iFrames and Frames in Protractor in the same way.

Some major differences between frames and iFrames are:

Frame or iFrame is nothing but another web feature on the HTML page that shows another component of the web page. When we look at the DOM structure of a website that includes an iframe, we will never find the inside content of the iframe. So, we are not going to be able to communicate with it through the DOM. We need to turn to the frame to see the elements present in the frame.

Testers need to check whether an element is inside an iframe/frame or just on a web page. In certain cases the element might be inside a frame, you’ll have to switch to that particular frame in order to access those elements. You’ll have to use the switchTo() method in the protractor to manage any of the frames or iframes present on the webpage.

Below is an example of frames present on the selenium.dev website at: 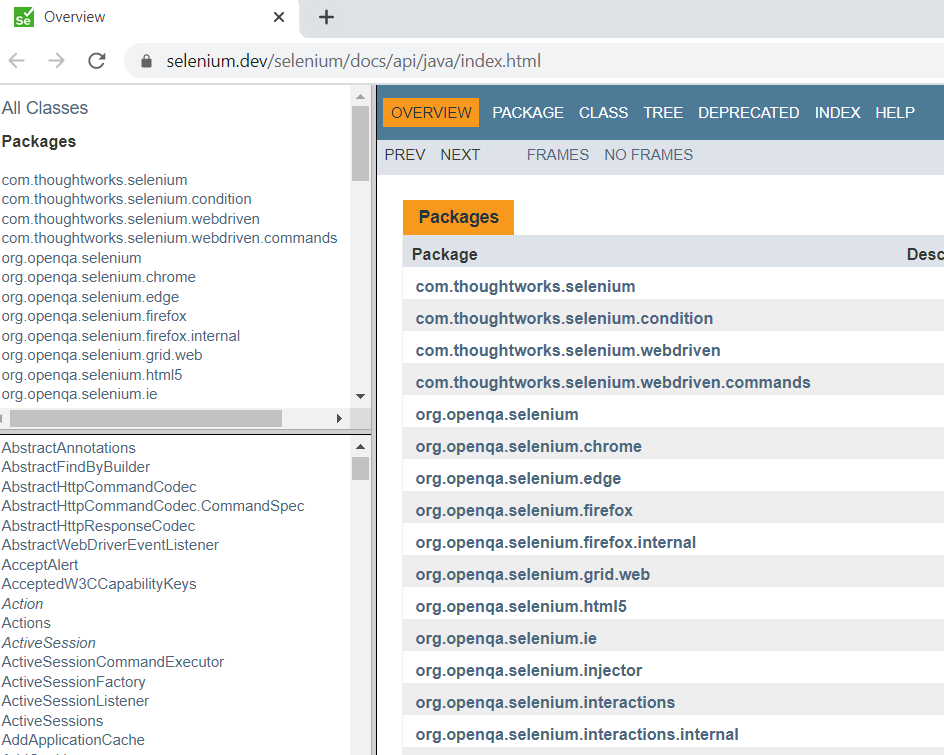 How To Find iFrame Or Frame In Protractor

To handle frames in Selenium with Protractor, you’ll need to identify them first. You can find the frame or iframe by right-clicking in the browser while performing manual testing. But finding frames or iFrames for Selenium test automation can be a bit tricky.

Below are the ways to locate an iframe/frame:

While finding iframes or frames, you’ll come across scenarios where frames or iframes share the same name and id. Also, we cannot use the locators such as link text or partial link text as they are only available for the anchor tag. Refer to this blog to know more about handling locators in Protractor.

In order to identify the elements to handle frames in Selenium, you can use locators like XPath, class name, CSS, etc. to find frames or iframes. This is the widely used approach when finding frames. For our example, we can consider the iframes and use the XPath locator to get the element.

When you create a frame in Protractor, it assigns an index in an increment way to every frame on the web page. These indexes can be used to find the frames or iframes. However, the use of the index approach is not preferred, as the index might change whenever a new frame position is introduced before the frames.

How To Handle Frames In Selenium With Protractor?

The most common use case is to handle frames in Selenium with protractor where you locate a frame and then switch to the target frame. Here I’ll handle a single frame in this Protractor testing tutorial.

Below are the steps involved to find the frame in protractor:

Step 1: Navigate to the URL in the browser using the below:

Step 2: Fetch the text from the element and store the value in the string datatype.

Step 3: We use the unique attribute to fetch the element using the attribute id, hence we can use this unique id to switch to the frame.

Step 4: We will find the text in the new frame and store input the text stored from the previous frame.

By performing this you can verify that the frame is switched successfully and the text from the first frame is written in the new frame. Example of a single iframe is available at http://the-internet.herokuapp.com/iframe

Below is the complete code for this Protractor testing tutorial that demonstrates this behavior to handle frames in Selenium with Protractor.

Sometimes there are Selenium test automation scenarios, where you’ll encounter multiple frames in a web page, especially with nested frames. The situation becomes complex when you’ll switch between these frames to handle frames in Selenium with Protractor. Refer to the article on handling multiple windows in Protractor, to know more about how to handle multiple windows

Hence, you need to follow a particular approach when switching a frame inside a frame. You can only access the content of a child frame when we are inside a particular frame as it is not to access them from outside of the frame or from any other frames on the webpage.

Below are the steps involved to handle frames in Selenium with Protractor for nested frames:

Step 1: Navigate to the URL in the browser using the below

Step 2: Locate the current frame i.e. frame1 and save that as a web element.

Step 3: Next, using the switchTo().frame command we will navigate to frame1.

Step 4: From inside the frame1 we will now locate the current frame and switch to the frame. Since we are already inside a frame, we will use xpath location to switch to the inner frame.

Step 5: Then we can perform any operation to validate the switching of the frame such as  writing a text or clicking a button

Below is the complete code for this Protractor testing tutorial that demonstrates this behavior to handle frames in Selenium with Protractor for nested frames.

Navigate to Parent Frame With the Framework

There are certain Selenium test automation scenarios, where after performing actions in the current frame, i.e. the inner frame, you’ll need to navigate out of that frame, so that you can access the elements in the outer frame . For such type of situation, protractor provides us with switchToParentFrame(). It assists in switching the control to the outer frame of the web page to handle frames in Selenium, otherwise, it won’t be possible to interact with the other elements of the webpage in the parent frame without exiting the current frame.

But it is important to note that once we are outside of the inner frame we cannot access the elements inside this frame and need to again navigate to the frame with the nested frame approach.

For our demonstration to handle frames in Selenium with Protractor we will execute the following Selenium test automation scenario:

Below in this Protractor testing tutorial are the detailed steps that will be involved to handle parent frames in protractor:

Step 1: We will switch to frame 1 and then switch to the inner frame i.e. frame 3 as we did in our previous demonstrations.

Step 2: Now, we will switch back to the outer frame i.e. frame 1 using the switchToParentFrame() method.

Step 3: Next, we will enter the appropriate text after locating the text box in the frame.

Step 4: Next, we will switch back to the main frame at the page level using the switchToParentFrame() method.

Step 5: Locate the elements that have the subject and fetch the header text.

Step 6: Finally, to validate we will compare this text with the desired value.

Below is the complete code that demonstrates the approach of switching back to the parent frame to handle frames in Selenium.

Unlike the switchToParentFrame() method earlier discussed in this Protractor testing tutorial, which is used to exit from the current frame, the default content method in protractor exits from all the frames on the webpage and positions the control of protractor at the page level. Moreover, once the control is moved at the page level, we will not be able to access any elements inside the iframe unless we navigate back to it.

For our example, we need to perform the following steps to handle frames in Selenium.:

Step 1: I’ll perform the operation in the inner frame by navigating to frame 1 and the switch to frame 3 as per the previous demonstration.

Step 2: Now I'll use the switchTo().defaultContent() to exit from all the frames and handle the control to the page level.

Step 3: Navigate to the other frame again using the switchTo() method and select the value from the dropdown to store the selected value in the web element

Step 4: Finally, we would be able to validate the dropdown using clicks.

Below in this Protractor testing tutorial  is the complete code that demonstrates the behavior of default content with frames in protractor.

You can run the same test script to handle frames in Selenium on a cloud selenium grid platform. Using an online Selenium grid. you can run the tests across various real browsers, OS, and devices. You just need to make a few configuration changes to connect with the LambdaTest hub. Below is our revised script with the appropriate modifications to handle frames in Selenium.

As we saw in the example for this Protractor testing tutorial, that just by appending a few lines of code we can connect to the LambdaTest Platform and run our previous test script in the cloud by. In order to have this setup, we are required to generate the desired capability matrix.

We can visit LambdaTest Selenium desired capabilities generator for generating the required configuration through which we can specify the environment in which we would like to perform our tests. Also, we just need to pass our LambdaTest username and access key in the configuration file that will uniquely identify us on the LambdaTest platform.

Below is the output on running the test to handle frames in Selenium:

This brings us to the end of this Protractor testing tutorial on how to handle frames in Selenium with the protractor. I hope it was a great experience in learning about handling frames and iFrames and exploring different approaches that we should keep in mind. I explored how to use the switchTo() frame method to work with a single frame in Protractor and how to navigate to the parent frame or between the nested frames.

This further helps in performing automated browser testing of websites that have multiple frames and browser windows. Moreover, adding frames to our web page enhances the look as the frame helps to allot proper sectional division based on the content which makes it more effective when used to the fullest.

Also since we know that protractor is based on selenium and used mainly for automated selenium test automation on browsers, it inherits many properties from them, including debugging protractor tests. This is the reason we can use the frames with other similar selenium frameworks. That’s all for now. Feel free to share this article with your peers.