The latest operator provides native integration with the Couchbase Prometheus Exporter for collecting and exposing Couchbase Server metrics. These exported metrics can be scraped by Prometheus and then visualized in tools like Grafana.

We will describe the steps to deploy the cluster with the Couchbase Prometheus Exporter and look at some of the metrics through Grafana. This will be a simple single cluster test deployment and will not detail all the other necessary steps for a production level deployment.

We will be closely following the Couchbase Autonomous Operator 2.0 Beta tutorial on installing on Amazon EKS.

I assume you already have an Amazon Virtual Private Cloud (VPC) to use. Follow the documentation on Getting Started with Amazon EKS and install the following:

A quick overview of the architecture of our deployment. 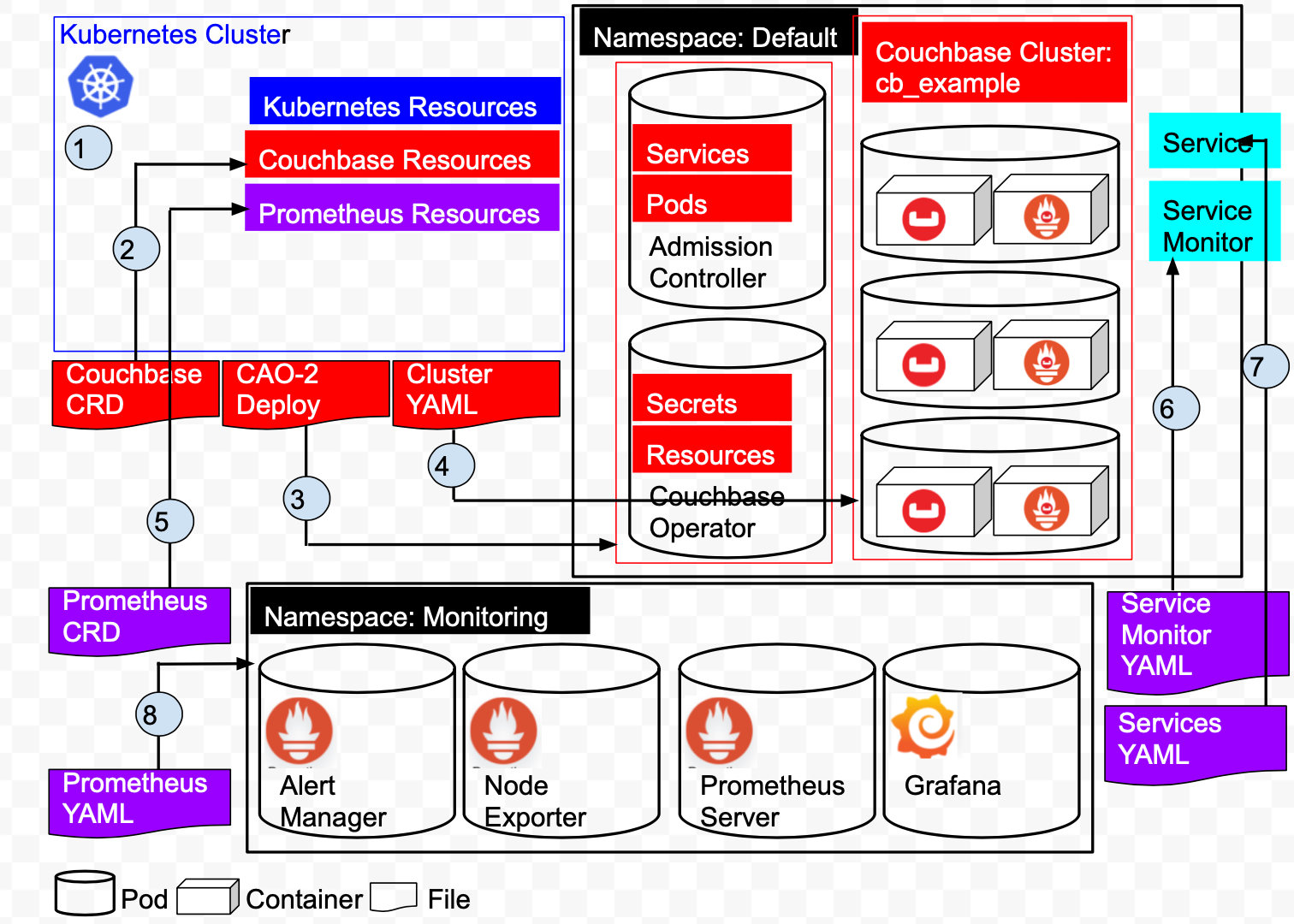 Referring the above diagram:

Create the Cluster and Configure kubectl

This command is vital as it sets the relevant Amazon Resource Name (ARN) variables in ~/.kube/config. Optionally, you can add --region regionName to specify a cluster in a region that is different than the default. (Your default region should have been specified when you first setup the AWS CLI through aws configurecommand.)

Note: I downloaded the Operator for MacOS, renamed the package from  couchbase-autonomous-operator-kubernetes_2.0.0-macos-x86_64 to cao-2 and cd’d into this directory.

The first step in installing the Operator is to install the custom resource definitions (CRD) that describe the Couchbase resource types.

Check the status of the Operator

I’ll deploy a 3 node Couchbase Server 6.5.0 Cluster with Prometheus Couchbase Exporter. For this, I created my-cluster.yaml file in the current directory. This is just my sample. Here is the file:

Tip: Make sure that buckets.managed is set to false. Otherwise, if you create a bucket manually once the cluster is up and running, Kubernetes will automatically drop it.

Both the secret as well as the cluster are created. This does not mean they are up and running yet, for that you will have to verify as described in the next step.

Make sure that all the pods are Ready and Running. In case there is some problem, you can get the logs from the Operator.

Optional: Get the Logs

If you encounter any problems in the previous step, you can check the logs as shown below.

Here, the Couchbase cluster deployed without any errors.

Let’s describe a Couchbase pod to check what its running.

From the output above, we see that each Couchbase pod is running 2 containers. The first is running Couchbase Server 6.5.0 and and the other is running the Couchbase Prometheus Exporter which is using Port 9091.

In an actual production environment, you would typically deploy using DNS and a LoadBalancer acting as the proxy and would access Couchbase UI securely, with SSL using DNS SRV records. Since we are in a test environment, we will access the Couchbase UI directly from Port 8091. We do need one more step to achieve this and that is Port Forwarding.

We now have deployed three pods, however, it’s enough to port forward from one pod to access the Couchbase Admin UI.

Run a workload to generate some metrics

We will use cbc-pillowfight to generate the workload. Luckily, this is bundled along with the Operator and lets deploy this. Let’s make a minor modification to the YAML file first, so that it doesn’t stop with loading the data but performs operations on the bucket. We will use the pillow bucket we just created.

Change the bucket from default to pillow and changed the -c (number of loops) option from 10 to 10,000.

With the above approach, there is a limitation. First is, we would have to forward port 9091 from all 3 nodes and those node names would be hardcoded. Hardcoding node names is a huge problem in a Kubernetes environment. Moreover, you would really not be doing port forwarding in a Production environment, where you would be typically deploying with DNS and would use the DNS SRV to connect to the cluster. Finally, its best practice to run Prometheus and Grafana in Kubernetes itself, aligning with the Cloud Native paradigm.

In Part 2, we will be doing just that, apart from DNS since we still want to keep this as simple as possible for quick testing.