As one of the most widely used enterprise resource planning solutions on the market, SAP plays a central role in the most critical business processes for many companies. In order to fully automate and optimize these business processes, companies need to integrate SAP with other applications within their organization. This article discusses SAP integration with other applications like Salesforce, e-POS, e-Commerce SharePoint etc. including uses and benefits, challenges, and new approaches.

An alternative approach to point-to-point quick fixes and expensive SOA stacks is integrating SAP using an ESB (Enterprise Service Bus). ESBs provide a modern, lightweight, standalone solution for integrating SAP with other applications, including SaaS solutions like Salesforce, ePOS, e-Commerce, and SharePoint. Mule ESB is the only enterprise service bus to be certified by SAP for SAP integration. Mule’s SAP Enterprise Connector provides bidirectional communication and works with existing SAP technologies such as:

The SAP connector establishes a connection to a SAP system using JCO libraries (provided by SAP). The Connector supports the option to configure SAP connection details, connection pooling, and max limit of active connections. If the connector is used for outbound data from SAP, then ESB registers the current Mule ESB instance as JCO destination/Gateway Server. 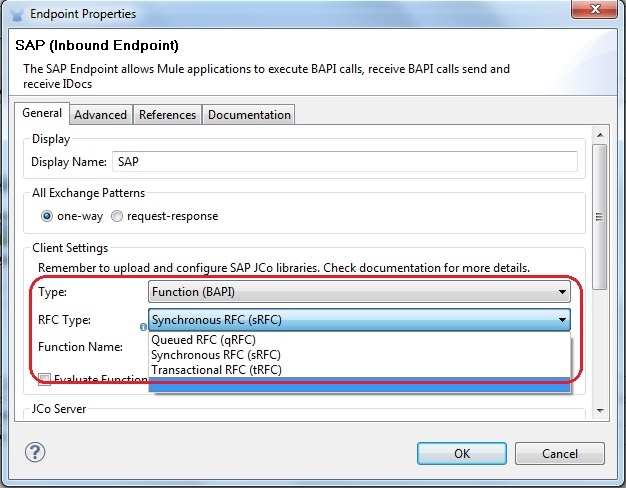 The adapter at the outbound channel, however, is called by the pipeline, and can, therefore, be regarded as part of the pipeline. As part of ESB flow definition, a SAP inbound endpoint was used to receive iDocs from SAP. A new destination (Program ID) was created in SAP, the iDocs created in SAP were also published to the new destination. There are two processes in IDOC processing one is INBOUND PROCESS (IDOC coming to the system and its handling at various stages) and the other is OUTBOUND PROCESS (IDOC is sent to another system. Outbound data from SAP, in case of Price/VAT data from SAP, ESB receives iDocs as JCO iDocDocumentList elements. Each iDocDocument contains iDoc metadata and Segments which internally had the Segment data (Price or VAT information).

ESB can receive multiple iDocs at any time: inbound data to SAP, in case of Sales/Return Order from other application to SAP, Mule ESB converted payload to iDoc XML format using XML-to-iDoc transformer, and posted the request to SAP.

Mule ESB Enterprise can be clustered to support High Availability. The SAP adaptors are cluster-aware. The TID handler should be configured to use the database in case of Clustered ESB nodes to ensure that ESB does not process the same transaction twice. Reliability and Throttling were enabled by using Active MQ message broker using Mule ESB which provided an out of the box connector. Throttling was controlled through configurations such that Mule ESB processes load to a downstream system like POS, based on a response acknowledgment.

It is possible for Mule ESB to handle a higher volume of data from SAP to support batch process. ESB received data from SAP and output to destination interfaces were throttled using Active MQ. ESB also provides options to tune the number of threads for processing.

Benefits to the Customer

When SAP is properly integrated with other applications, companies are able to streamline and fully automate their business processes. Companies further benefit from SAP integration in the following ways:

Although integration has been around for well over a decade, the specific challenge of integrating SAP with other system emerged much more recently. Moreover, traditional approaches to integration have been costly and complex. Direct, point-to-point integration, for instance, has been utilized in some cases as a quick, ad hoc solution to SAP integration challenges. However, such an approach creates tight dependencies between the two systems, resulting in a brittle environment and a progressively more complex architecture as new integration are added over time.