All multi-threaded applications are prone to deadlock. The modern Kotlin platform is no exception to it. In this post let’s discuss how to simulate a deadlock in Kotlin and how you can troubleshoot it. 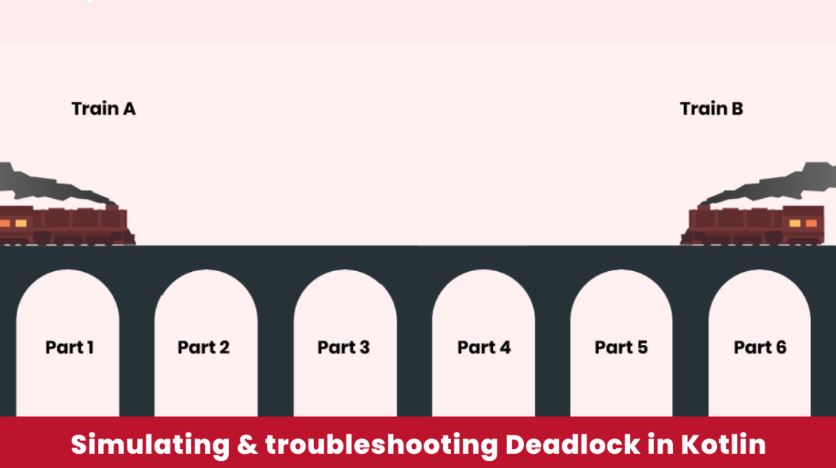 First, let’s try to understand what ‘Deadlock’ means. Several technical definitions aren’t clear. ‘Deadlock’ is one among them ;-). Deadlock’s definition goes like this: “Deadlock is a situation where a set of processes are blocked because each process is holding a resource and waiting for another resource acquired by some other process.” It’s always easier to learn something new through examples and pictures. Let’s look at the below practical example, which may help you to understand Deadlock better.

Let’s say there is only one train track, and this train track has six parts(part-1, part-2, part-3, part-4, part-5, part-6). Train-A starts at part-1 and Train-B starts at Part-6 on the same train track at the same time. Let’s say both trains travel at the same speed. Under this circumstance, Train-A and Train-B will reach a Deadlock state when they reach part-3 and part-4 of the train track. Because when Train-A is in part-3 of the train track, it will be stuck waiting for part-4 of the track, which Train-B holds. On the other hand, when Train-B is in part 4, it will be stuck waiting for part 3, which Train-A holds. Thus, both trains can’t move forward. This is a classic Deadlock situation. Once a Deadlock happens in the application, it cannot be recovered. The only way to recover from Deadlock is to restart the application.

Here is a sample program application, which generates a deadlock between 2 Kotlin threads.

You can notice the sample program contains the ‘DeadlockApp’ class. This class has a start() method. In this method, 2 threads with the name ‘ThreadA’ and ‘ThreadB’ are launched.

So let's visualize what happens when the above program is executed:

Thus, both threads will end up in classic Deadlock.

How to Troubleshoot Kotlin Deadlock?

To troubleshoot deadlock problems, it’s sufficient if you can just capture thread dumps and analyze them through thread dump analysis tools such as fastThread, and samurai. However most of the time, you will not know whether the actual problem in your application is a deadlock or not. What you will notice is the unresponsiveness of the application. Thus, it’s safe to capture all the prominent artefacts that are essential for troubleshooting such as Garbage Collection logs, thread dump, heap dump, netstat, iostat,…

We used yCrash open source script, which would capture 360-degree data (GC log, 3 snapshots of thread dump, heap dump, netstat, iostat, vmstat, top, top -H,…) from your application stack within a minute and generate a bundle zip file. You can then either manually analyze these artefacts or upload them to yCrash server for automated analysis. When we uploaded the captured artefacts, it instantly generated a root cause analysis report highlighting the source of the problem. 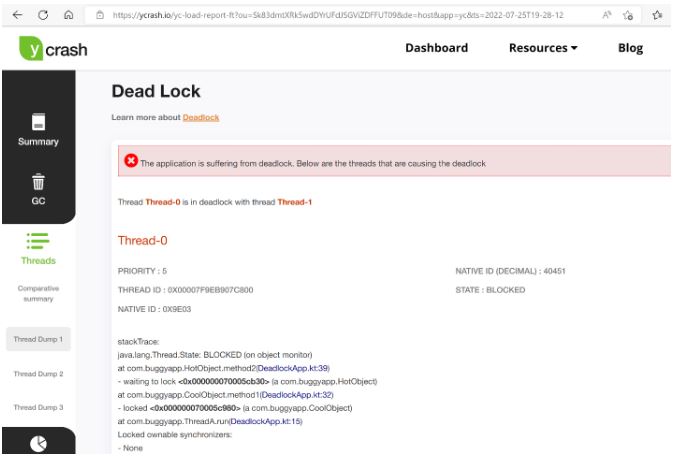 Fig: Stacktrace of two kotlin threads are suffering from deadlock

Above is the thread dump analysis report from the tool highlighting the two threads and their stack trace which were causing the deadlock.

You can clearly see yCrash reporting ‘Thread-0’ and ‘Thread-1’ suffering from Deadlock. yCrash also reports the stack trace of ‘Thread-0’ and ‘Thread-1’. From the stack trace, you can notice ‘Thread-0 ‘ acquired the lock of ‘CoolObject’, and it is waiting for ‘HotObject’ lock. On the other hand, ‘Thread-1’ acquired the lock of ‘HotObject’, and it is waiting for ‘CoolObject’ lock. Now based on this stack trace we know the exact line of code that is causing the problem.