Join For Free
Physically, sound is an oscillation of a mechanical medium that makes the surrounding air also oscillate and transport the sound as a compression wave. Mathematically, the oscillations can be described as

where t is the time, and f the frequency of the oscillation. Each musical note vibrates at a particular frequency and to generate a tone we have to generate an oscillation with the appropriate frequency. The following table shows the complete musical scale between middle A and A-880, in the first column we have the tone and in the second the frequency that we have to use to generate the tone: Sound on a computer is a sequence of numbers and we are going to see how to generate an array that represents a musical tone with numpy. The following function is able to generate a note using the formula above:
And we can use this function to generate an A tone of 2 seconds with 44100 samples per second in this way: The script put the sound into a wav file and we can play it with an external player. This plot shows a part of the signal generated by the script: 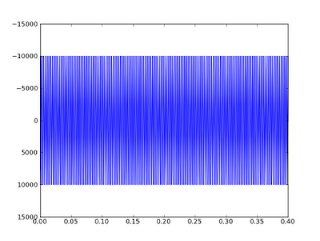