The remainder of the series is focussed on working through the end to end steps of building a real (albeit simple) application. – MongoPop. Part 2: Using MongoDB With Node.js created an environment where we could work with a MongoDB database from Node.js; it also created a simplified interface to the MongoDB Node.js Driver. Part 3: Building a REST API with Express.js built on Part 2 by using Express.js to add a REST API which will be used by the clients that we implement in the final posts.

This post demonstrates how to use Angular 2 (the evolution of Angular.js) to implement a remote web-app client for the Mongopop application.

Angular, originally created and maintained by Google, runs your JavaScript code within the user's web browsers to implement a reactive user interface (UI). A reactive UI gives the user immediate feedback as they give their input (in contrast to static web forms where you enter all of your data, hit "Submit" and wait.

Version 1 of Angular was called AngularJS, but it was shortened to Angular in Angular 2 after it was completely rewritten in Typescript (a superset of JavaScript) – Typescript is now also the recommended language for Angular apps to use.

Angular application codes can also be executed on the back-end server rather than in a browser, or as a native desktop or mobile application.

The Angular client code is included as part if the Mongopop package installed in Part 2: Using MongoDB With Node.js.

The existing package.json file includes a script for transpiling the Angular 2 code:

That tsc:w delegates the work to a script of the same name defined in public/package.json;

tsc -w continually monitors the client app's Typescript files and reruns the transpilation every time they are edited.

To start the continual transpilation of the Angular 2 code:

Angular applications (both AngularJS and Angular2) are built from one or more, nested components – Mongopop is no exception: 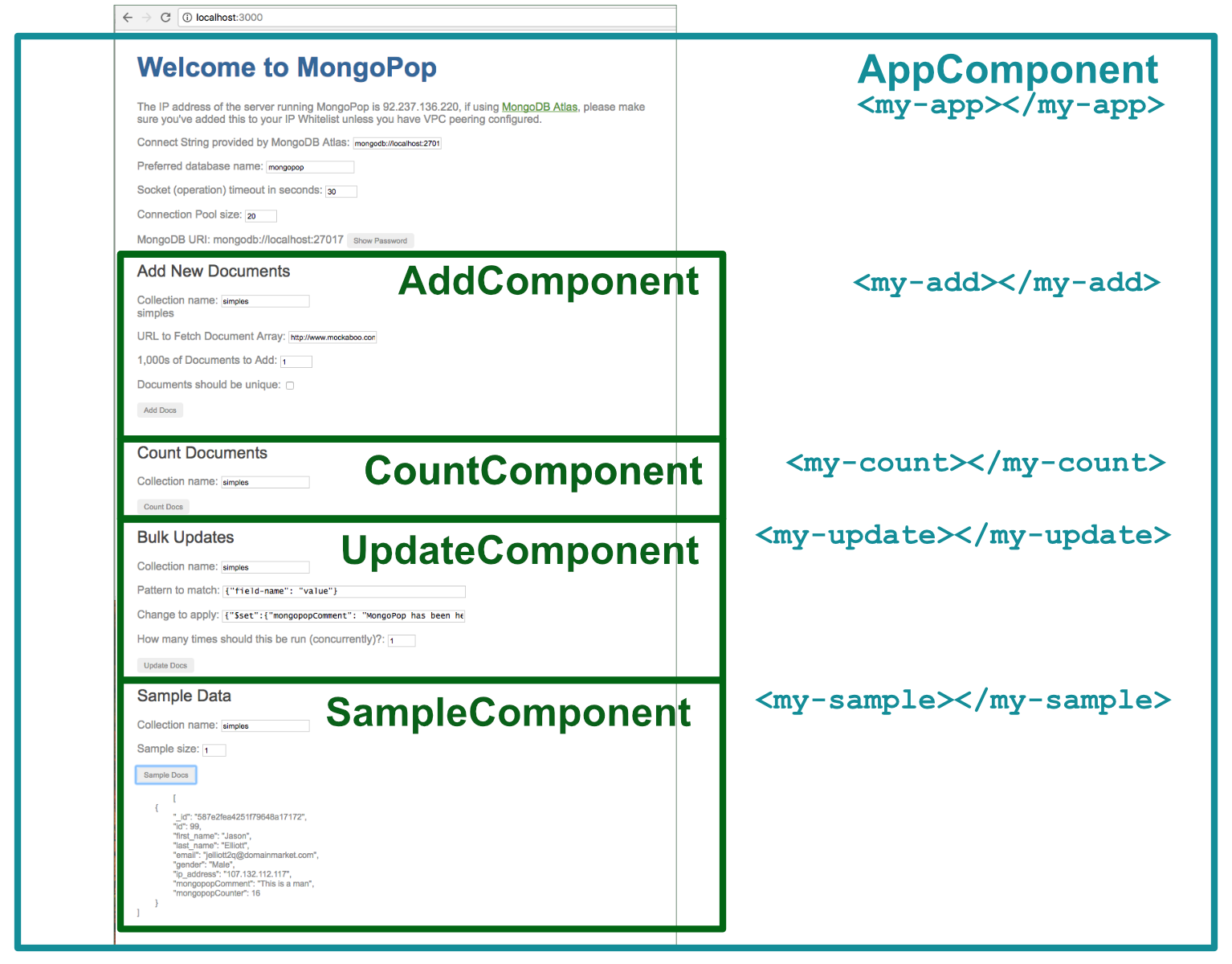 The main component (AppComponent)contains the HTML and logic for connecting to the database and orchestrating its sub-components. Part of the definition of AppComponent is meta data/decoration to indicate that it should be loaded at the point that a my-appelement (<my-app></my-app>) appears in the index.html file (once the component is running, its output replaces whatever holding content sits between <my-app> and </my-app>). AppComponent is implemented by:

Mongopop is a reasonably flat application with only one layer of sub-components below AppComponent, but more complex applications may nest deeper.

Changes to a data value by a parent component will automatically be propagated to a child – it's best practice to have data flow in this direction as much as possible. If a data value is changed by a child and the parent (either directly or as a proxy for one of its other child components) needs to know of the change, then the child triggers an event. That event is processed by a handler registered by the parent – the parent may then explicitly act on the change, but even if it does nothing explicit, the change flows to the other child components.

This table details what data is passed from AppComponent down to each of its children and what data change events are sent back up to AppComponent (and from there, back down to the other children):

To recap, the files and folders covered earlier in this series:

Now for the new files that implement the Angular client (note that because it must be downloaded by a remote browser it is stored under the public folder):

"Boilerplate" Files and How They Get Invoked

This is an imposing number of new files and this is one of the reasons that Angular is often viewed as the more complex layer in the application stack. One of the frustrations for many developers is the number of files that need to be created and edited on the client side before your first line of component/application code is executed. The good news is that there is a consistent pattern and so it's reasonable to fork your app from an existing project – the Mongopop app can be cloned from GitHub or, the Angular QuickStart can be used as your starting point.

As a reminder, here is the relationship between these common files (and our application-specific components): 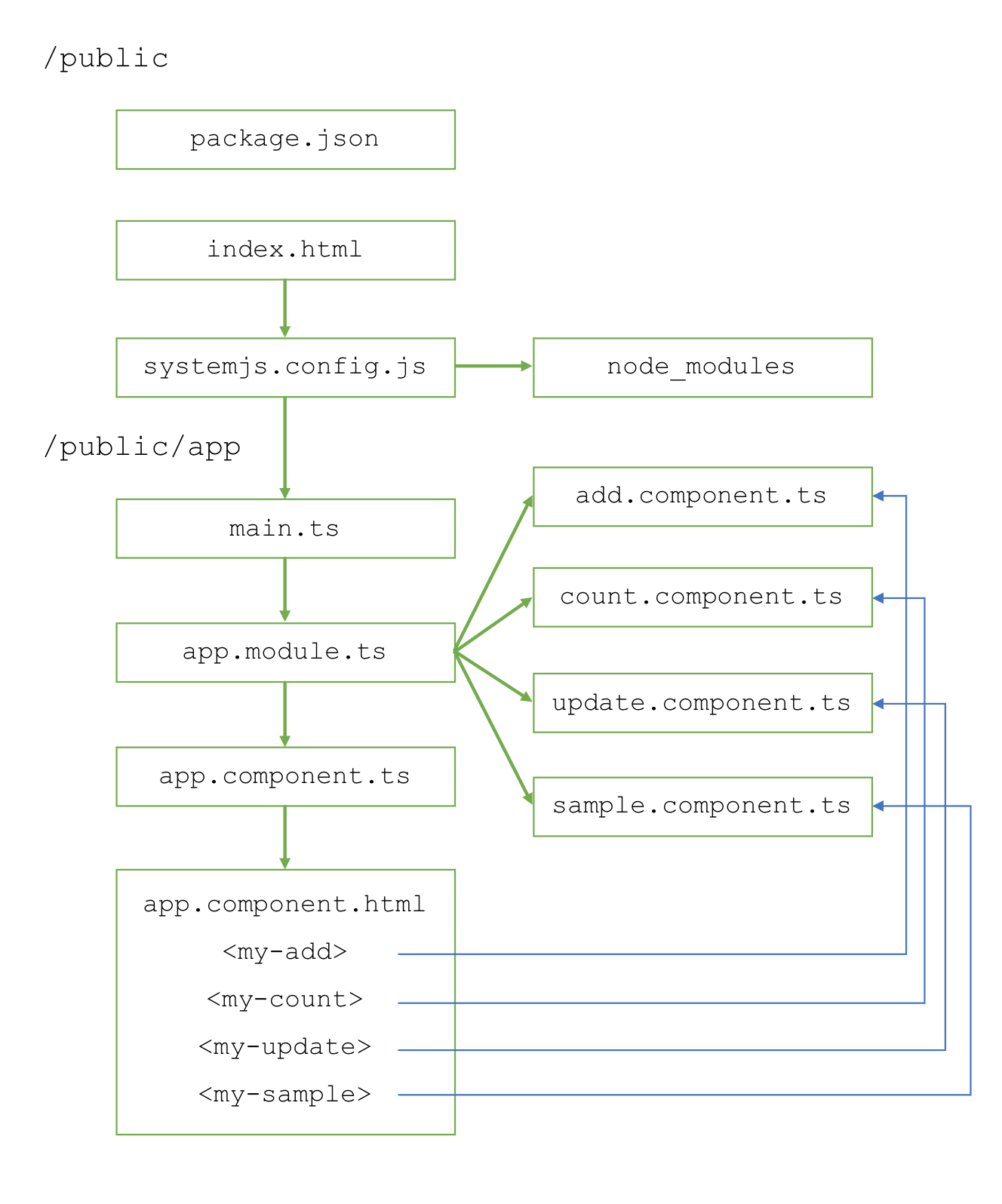 Contents of the "Boilerplate" Files

This section includes the contents for each of the non-component files and then remarks on some of the key points.

The scripts section defines what npm should do when you type npm run <command-name>from the command line. Of most interest is the tsc:w script – this is how the transpiler is launched. After transpiling all of the .ts Typescript files, it watches them for changes – retranspiling as needed.

Note that the dependencies are for this Angular client. They will be installed in public/node_modules when npm install is run (for Mongopop, this is done automatically when building the full project ).

Focussing on the key lines, the application is started using the app defined in systemjs.config.js:

And the output from the application replaces the placeholder text in the my-app element:

packages.app.main is mapped to public/app/main.js – note that main.js is referenced rather than main.ts as it is always the transpiled code that is executed. This is what causes main.ts to be run.public/app/main.ts

This simply imports and bootstraps the AppModule class from public/app/app.module.ts (actually app.module.js)

This is the first file to actually reference the components which make up the Mongopop application!

Note that NgModule is the core module for Angular and must always be imported; for this application BrowserModule, HttpModule, and FormsModule are also needed.

The import commands also bring in the (.js) files for each of the components as well as the data service.

Following the imports, the @NgModuledecorator function takes a JSON object that tells Angular how to run the code for this module (AppModule) – including the list of imported modules, components, and services as well as the module/component needed to bootstrap the actual application (AppComponent).

Typescript and Observables (Before Getting Into Component Code)

As a reminder from "Modern Application Stack – Part 1: Introducing The MEAN Stack" - the most recent, widely supported version is ECMAScript 6 – normally referred to as /ES6/. ES6 is supported by recent versions of Chrome, Opera, Safari, and Node.js. Some platforms (e.g. Firefox and Microsoft Edge) do not yet support all features of ES6. These are some of the key features added in ES6:

Typescript is a superset of ES6 (JavaScript), adding static type checking. Angular 2 is written in Typescript and Typescript is the primary language to be used when writing code to run in Angular 2.

Because ES6 and Typescript are not supported in all environments, it is common to transpile the code into an earlier version of JavaScript to make it more portable. tsc is used to transpile Typescript into JavaScript.

And of course, JavaScript is augmented by numerous libraries. The Mongopop Angular 2 client uses Observables from the RxJS reactive libraries which greatly simplify making asynchronous calls to the back-end (a pattern historically referred to as AJAX).

RxJS Observables fulfill a similar role to ES6 promises in that they simplify the code involved with asynchronous function calls (removing the need to explicitly pass callback functions). Promises are more contained than Observables, they make a call and later receive a single signal that the asynchronous activity triggered by the call succeeded or failed. Observables can have a more complex lifecycle, including the caller receiving multiple sets of results and the caller being able to cancel the Observable.

The Mongopop application uses two simple patterns when calling functions that return an Observable; the first is used within the components to digest the results from our own data service:

In Mongopop's use of Observables, we don't have anything to do in the final arrow function and so don't use it (and so it could have used the second pattern instead – but it's interesting to see both).

The second pattern is used within the data service when making calls to the Angular 2 http module (this example also shows how we return an Observable back to the components):

By adding the @Injectable decorator to the class definition, any member variables defined in the arguments to the class constructor function will be automatically instantiated (i.e. there is no need to explicitly request a new Http object):

After the constructor has been called, methods within the class can safely make use of the http data member.

As a reminder from Part 3: Building a REST API with Express.js, this is the REST API we have to interact with:

Apply an update to all documents in a collection which match a given pattern.

Most of the methods follow a very similar pattern and so only a few are explained here; refer to the DataService class to review the remainder.

The simplest method retrieves a count of the documents for a given collection:

This method returns an Observable, which in turn delivers an object of type MongoResult. MongoResult is defined in MongoResult.ts

The pop/count PUT method expects the request parameters to be in a specific format (see earlier table); to avoid coding errors, another Typescript class is used to ensure that the correct parameters are always included – CountDocsRequest.

http.post returns an Observable. If the Observable achieves a positive outcome then the map method is invoked to convert the resulting data (in this case, simply parsing the result from a JSON string into a Typescript/JavaScript object) before automatically passing that updated result through this method's own returned Observable.

The timeout method causes an error if the HTTP request doesn't succeed or fail within 6 minutes.

The catch method passes on any error from the HTTP request (or a generic error if error.toString() is null) if none exists.

The updateDBDocs method is a little more complex – before sending the request, it must first parse the user-provided strings representing:

This helper function is used to parse the (hopefully) JSON string:

If the string is a valid JSON document then tryParseJSON returns an object representation of it; if not then it returns an error.

A new class (UpdateDocsRequest) is used for the update request:

updateDBDocs is the method that is invoked from the component code:

After converting the received string into objects, it delegates the actual sending of the HTTP request to sendUpdateDocs:

Continue following this blog series to step through building the remaining stages of the Mongopop application:

Sorry to cut you off, but we'll have the second part of this article up tomorrow!