Before we get started with our tutorial, let's cover some general terminology that we'll need to know. 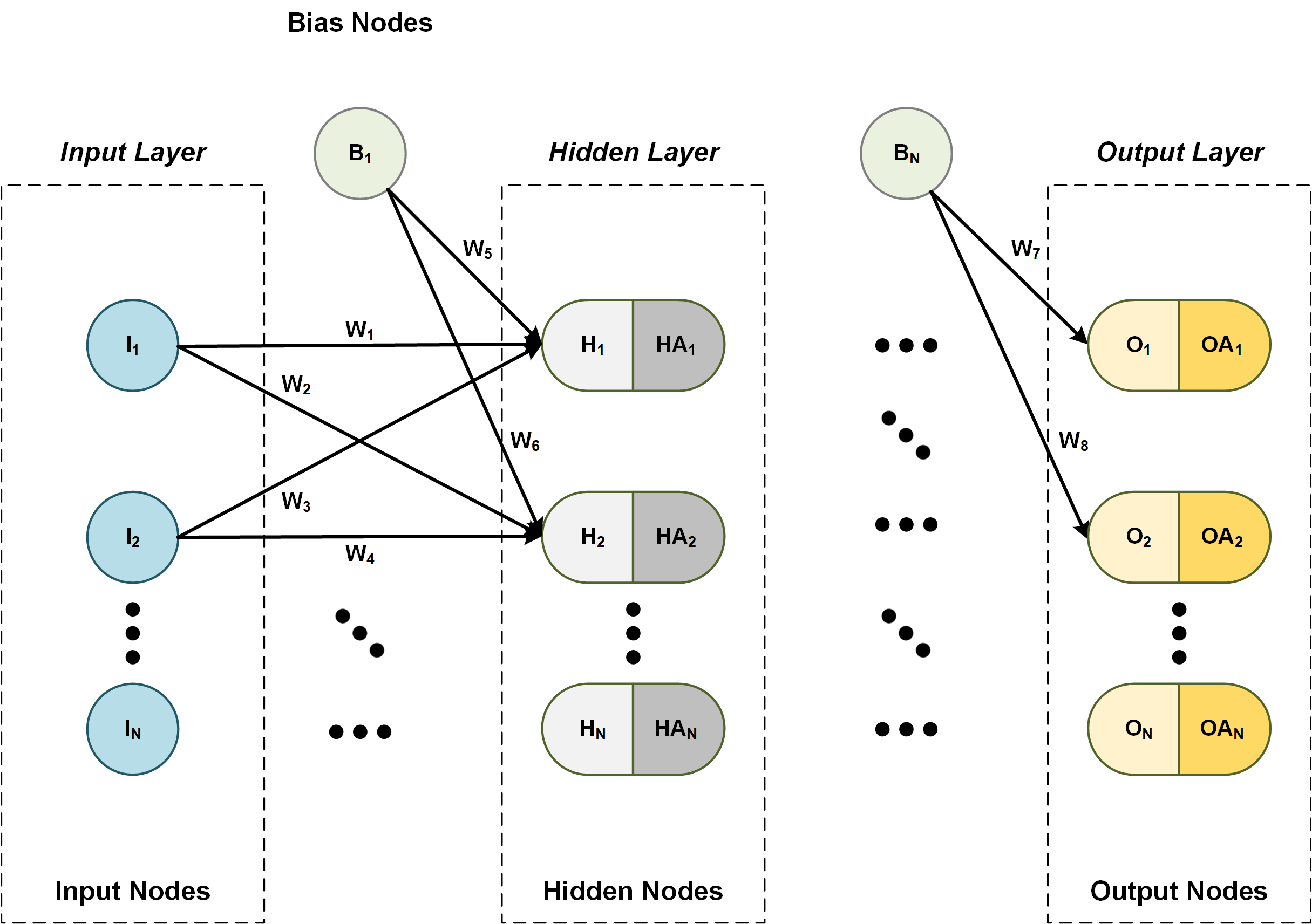 Getting straight to the point, neural network layers are independent of each other; hence, a specific layer can have an arbitrary number of nodes. Typically, the number of hidden nodes must be greater than the number of input nodes. When the neural network is used as a function approximation, the network will generally have one input and one output node. When the neural network is used as a classifier, the input and output nodes will match the input features and output classes. A neural network must have at least one hidden layer but can have as many as necessary. The bias nodes are always set equal to one. In analogy, the bias nodes are similar to the offset in linear regression i.e. y = mx+b. How does one select the proper number of nodes and hidden number of layers? This is the best part: there are really no rules! The modeler is free to use his or her best judgment on solving a specific problem. Experience has shown that there are best practices such as selecting an adequate number of hidden layers, activation functions, and training methods; however, this is beyond the scope of this article.

As a user, one first has to construct the neural network, then train the network by iterating with known outputs (AKA desired output, expected values) until convergence, and finally, use the trained network for prediction, classification, etc.

Let's consider a simple neural network, as shown below. 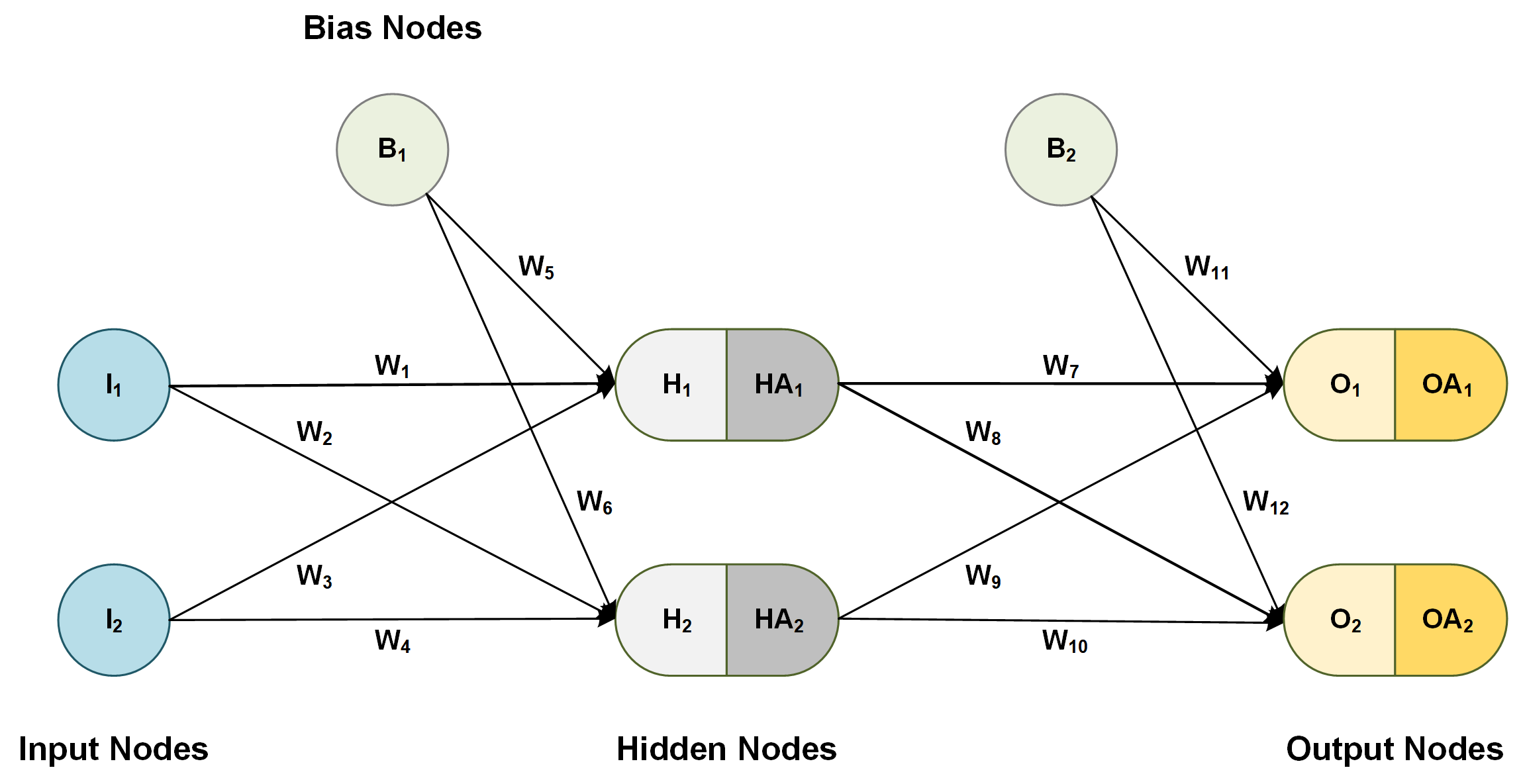 The first step after designing a neural network is initialization:

Note: Keep in mind that the variance of the distribution can be a different value. This has an effect on the convergence of the network.

As the title describes it, in this step, we calculate and move forward in the network all the values for the hidden layers and output layers.

Note: Here, the error is measured in terms of the mean square error, but the modeler is free to use other measures, such as entropy or even custom loss functions..

After the first pass, the error will be substantial, but we can use an algorithm called backpropagation to adjust the weights to reduce the error between the output of the network and the desired values

This is the step where the magic happens. The goal of this step is to incrementally adjust the weights in order for the network to produce values as close as possible to the expected values from the training data.

Note: Keep in mind statistical principles such as overfitting, etc.

Where k is the iteration number, η is the learning rate (typically a small number), and:

...is the derivative of the total error with regards to to the weight adjusted.

Let's calculate the derivative of the error e with regards to to a weight between the input and hidden layer, for example, W1 using the calculus chain rule. 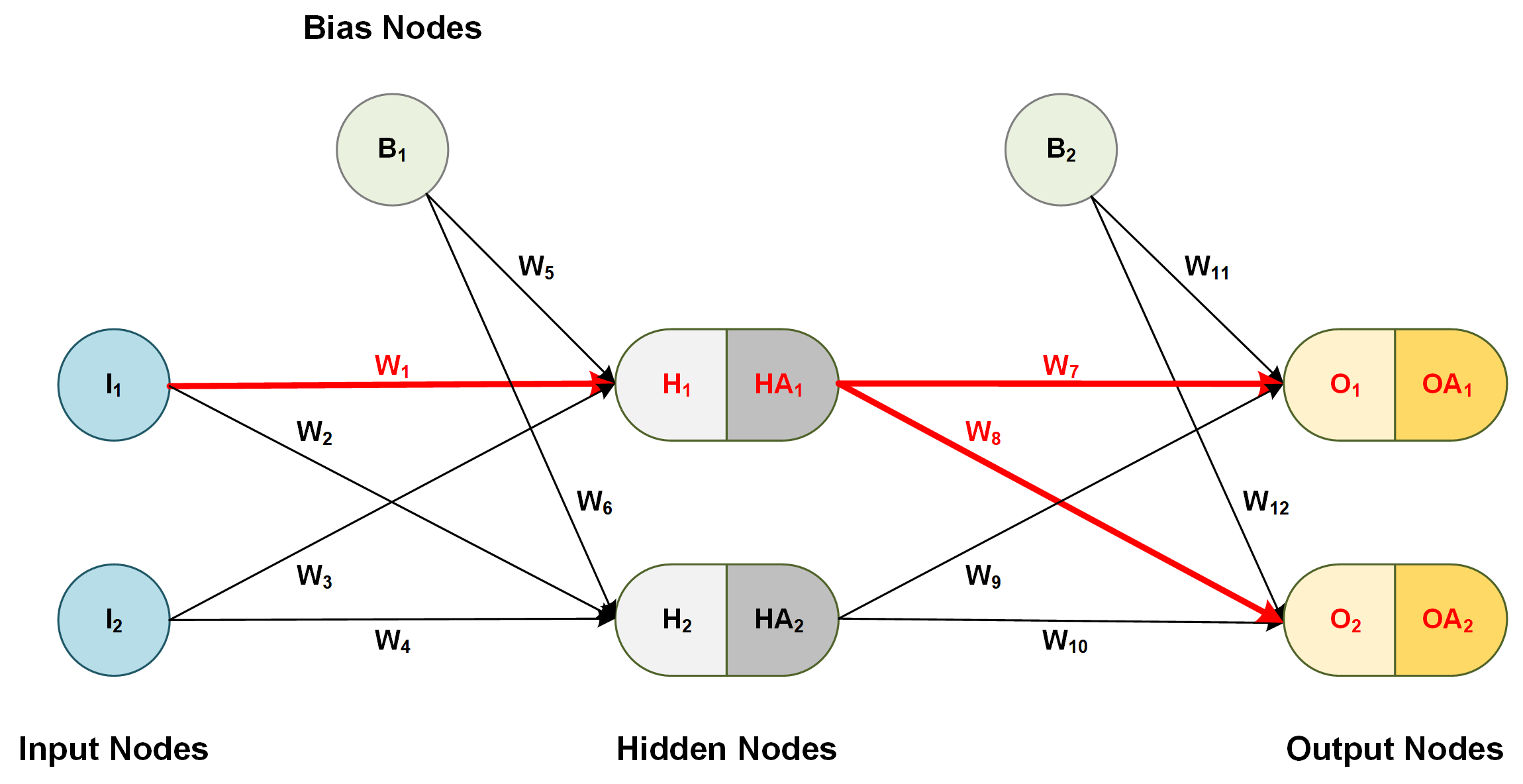 Figure 3: Chain rule for weights between input and hidden layer

This concludes one unique path to the weight derivative — but wait... there is one additional path that we have to calculate. Refer to Figure 3, and notice the connections and nodes marked in red.

Note that we leave out the second hidden node because the first weight in the network does not depend on the node. This is clearly seen in Figure 3 above.

We follow the same procedure for all the weights one-by-one in the network.

Here is another example where we calculate the derivative of the error with regard to a weight between the hidden layer and the output layer: 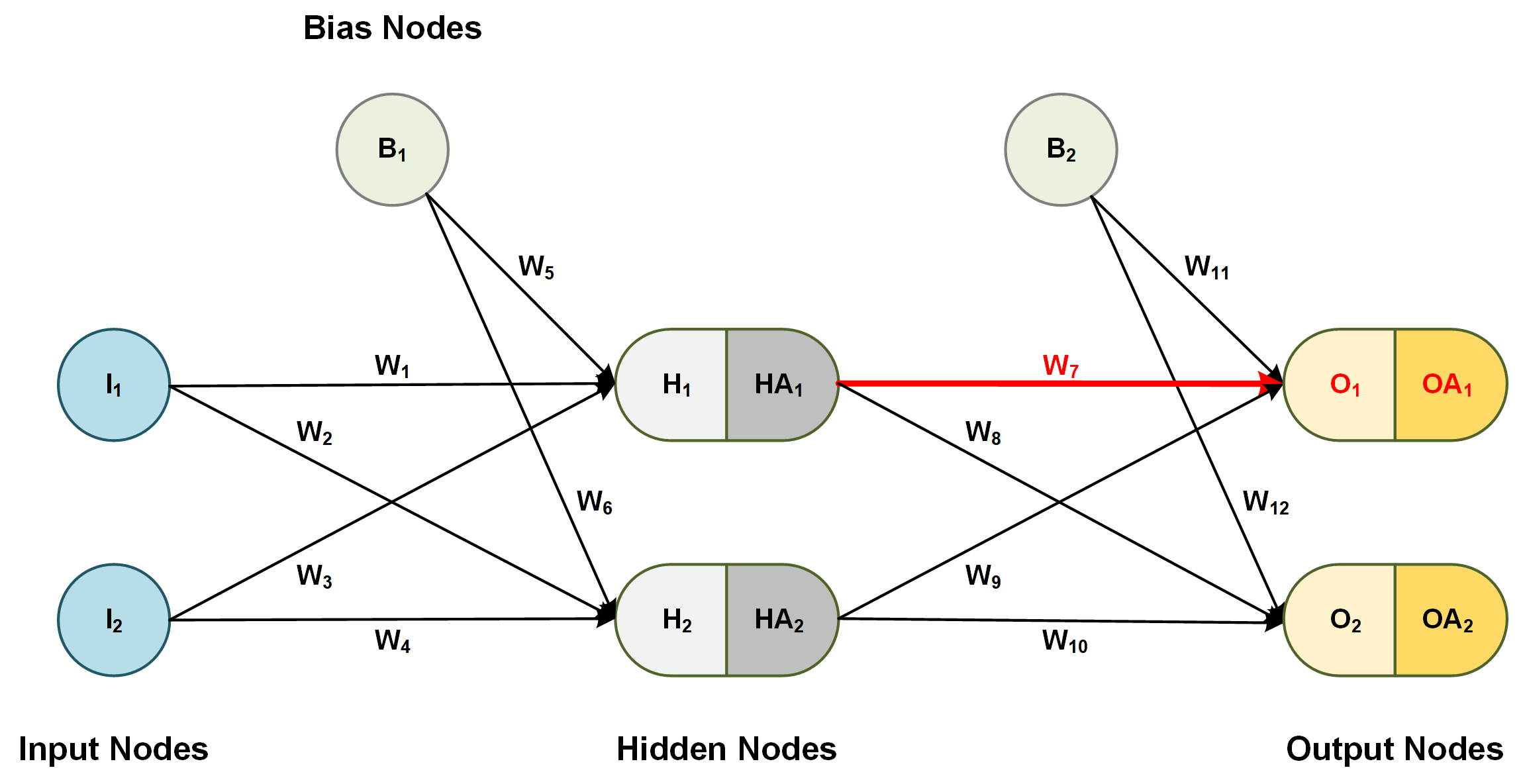 Figure 4: Chain rule for weights between hidden and output layer

Why do we calculate derivatives for all these unique paths? Note that the backpropagation is a direct application of the calculus chain rule.

Note that the total derivative of z with regard to t is the sum of the product of the individual derivatives. What if t is also a function of another variable?

Now, let's compare the chain rule with our neural network example and see if we can spot a pattern.

The same pattern follows if HA1 is a function of another variable.

At this point, it should be clear that the backpropagation is nothing more than the direct application of the calculus chains rule. One can identify the unique paths to a specific weight and take the sum of the product of the individual derivatives all the way to a specific weight.

Neural networks with two or more hidden layers are called deep networks. The same rules apply as in the simpler case; however, the chain rule is a bit longer.

Figure 5: Chain rule for weights between input and hidden layer

Notice something interesting here: each product factor belongs to a different layer. This observation will be useful later in the formulation.

Yet another example of a deep neural network with three hidden layers:

Figure 6: Chain rule for weights between input and hidden layer

Once again, the total derivative of the error e with regard to W1 is the sum of the product of all paths (paths 1-8). Note that there are more path combinations with more hidden layers and nodes per layer.

To efficiently program a structure, perhaps there exists some pattern where we can reuse the calculated partial derivatives.

To illustrate the pattern, let's observe the total derivatives for W1, W7, W13, and W19 in Figure 6 above. Note that these are not all the weights in the net but they are sufficient to make the point.

We can view the factored total derivatives for the specified weights in a tree-like form as shown below. 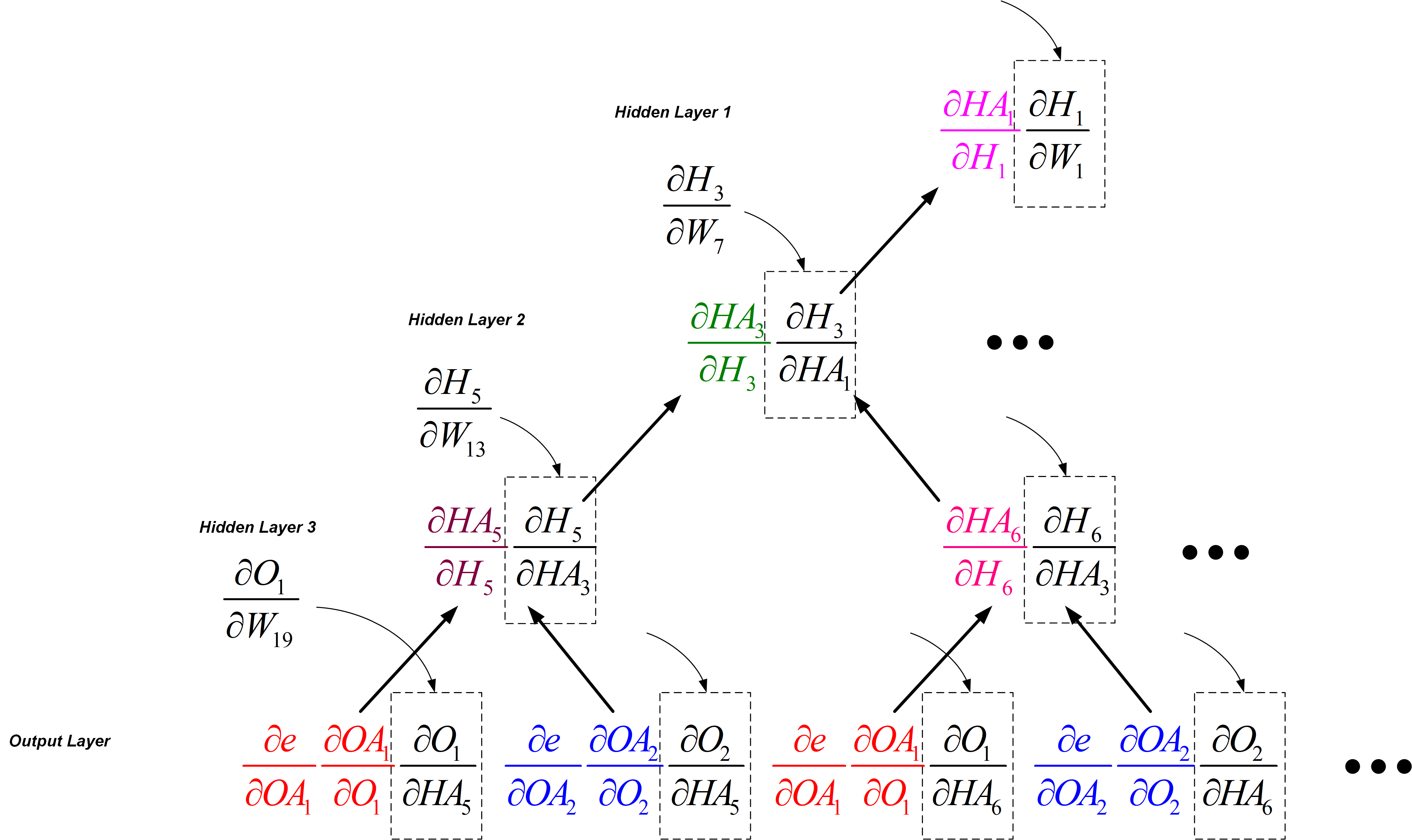 The rule to find the total derivative for a particular weight is to add the tree leaves in the same layer and multiply leaves up the branch.

For example, to find the total derivative for W7 in Hidden Layer 2, we can replace (dH3/dHA1) with (dH3/dW13) and we obtain the correct formula. Note: We ignore the higher terms in Hidden Layer 1.

We can do the same for W13, W19, and all other weight derivatives in the network by adding the lower level leaves, multiplying up the branch, replacing the correct partial derivative, and ignoring the higher terms.

The advantage of this structure is that one can pre-calculate all the individual derivatives and then, use summation and multiplication as less expensive operations to train the neural network using backpropagation.

Published at DZone with permission of Edvin Beqari. See the original article here.