Not long ago, a colleague brought to my attention that I was configuring Travis CI on new GitHub repos. They suggested I use GitHub Actions instead. I’d looked into Actions back when it was in beta, but didn’t delve too deeply into it because of some issues I found pretty early on. Plus, I’d been using Travis-CI for a bit now and didn’t have the bandwidth to learn another new thing at the time.

However, if GitHub Actions is as good as everyone says, it would be one less external service to deal with. This article is going to walk you through migrating your existing repository to GitHub Actions. And I’ll be sharing my findings along the way!

I’m going to use the Okta Maven Plugin for my repository. If you are a Java developer, it can get you set up with Okta in 30 seconds, check out the project’s readme. Even though I’m using a Java project, it’s possible to modify these steps for any project.

My original .travis.yml configures a simple matrix build. Matrix builds contain multiple jobs that run in parallel with different configurations. These can be as complex as you need; run a build on multiple operating systems, against different versions of tools, and with different environment variables. A matrix build that defines two operating systems, three environment variables, and two versions of Java would result in 12 individual builds (2 x 3 x 2).

My project expands into just two builds, one for each Java (8 and 11):

My build scripts do have a few references to Travis-CI environment variables like TRAVIS_REPO_SLUG and TRAVIS_SECURE_ENV_VARS, so I’ll need to find a replacement for those too.

The first step is to create a branch in your project. I called mine "github-actions-test":

GitHub will look at all of the YAML files in the .github/workflows directory in your project. I named mine, build.yml.

Why do all of these services still use the yml extension? The yaml.org FAQ even recommends yaml! Is anyone out there still supporting DOS 8.3 file names?

To keep this simple, I’m going to use a template for an Apache Maven projects on the first pass to make sure everything is working and then circle back and set up a matrix build with my custom build scripts.

Scheduled jobs are ONLY run against the "default" branch. I lost hours of my life trying to figure this out.

Test it out by adding the file and pushing the branch:

Navigate to the "Actions" tab of your GitHub repository to see the build, for example: 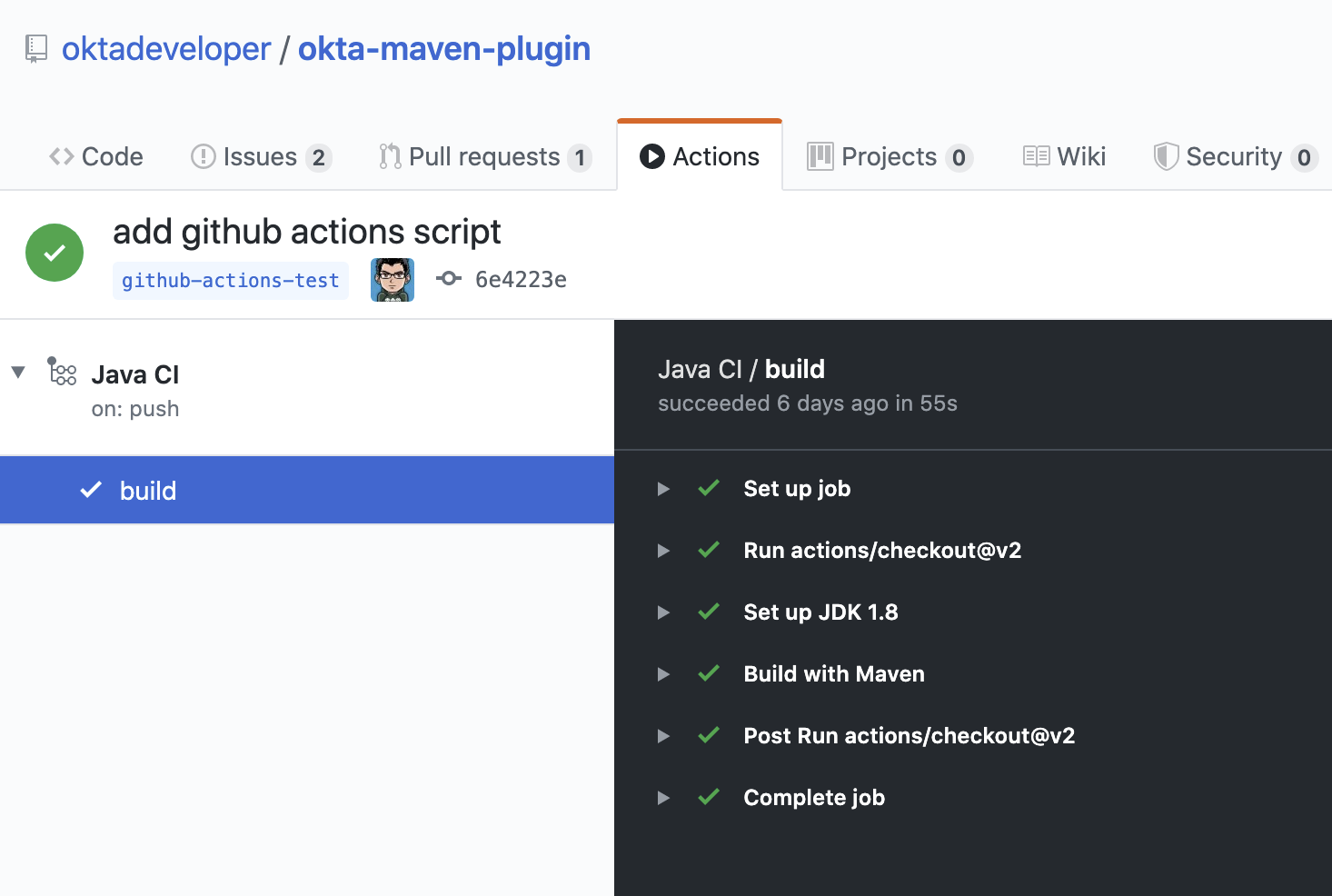 Of course, if you create a pull request the build status will be reported there as well.

My build was all green, so I’ll update the run attribute with my custom script:

Commit and push the changes again.

Matrix builds are configured a little differently in Actions than Travis CI, and it took some head-scratching before I understood the differences between the two. With Travis CI the configuration is declarative, unlike GitHub Actions which uses an expression syntax for everything. Variables are defined in a matrix element which are then used in "expressions" throughout your configuration. To build against multiple versions of Java I needed to define strategy.matrix.java = [8, 11] and then use the expression ${{ matrix.java }} where I previously had hard coded "1.8":

Once again, commit and push to your branch. Then, head over to the "Actions" tab on your GitHub project to see the matrix build result. 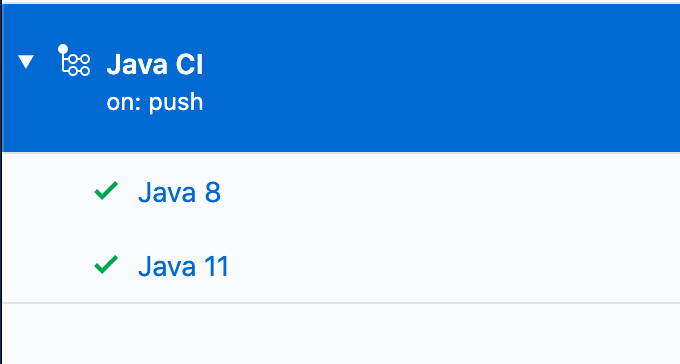 My original travis.yml included an "after success" step to upload code coverage data. This step simply executes a bash script:

I know, I’m not a fan of piping remote URLs to bash either.

The same command could be run directly with GitHub Actions too, but the GitHub Marketplace contains a whole host of third-party actions you can plug in into your build; a quick search for "Codecov" turned up what I was looking for!

Third-party actions use the same format as a GitHub Action, uses: <org>/<repo>@<tag>. For Codecov the usage looks like this:

This action does the same thing as the original bash script under the covers, the syntax is just more declarative.

I mentioned before that my bash scripts used a few TRAVIS_* environment variables. They also default to reasonable values where possible, which allows for running the script locally, or via GitHub Actions. To keep things focused in this post, I’ll walk through setting the Travis CI environment variables and tease the implementation-specific bits out of my build in a future post.

There are two ways to set environment variables with GitHub Actions: declare them directly in the YAML file or use a special syntax to output them to the console.

Declare them globally for your whole job:

Or scoped to the context of a single step:

You can also write a script to output a specific format: ::set-env name=<var-name>::<value>. In practice, that looks like this:

The GitHub Actions context variables and Travis CI environment variables don’t always line up one-to-one, but I was able to find the Actions equivalent for the following:

If you are trying to figure out what properties are available in the build context, you can add a run: echo "${{ toJson(github) }}" line to print them all.

While it’s possible to use the Travis CI environment variables, I don’t recommend it. It’s a great option if you want to test out GitHub Actions or need to run them in parallel in the short term, but to say this option is ugly and difficult to debug, is an understatement. Cleaning up these scripts is out of the scope of this post.

Overall I’m happy with GitHub Actions. I was able to migrate my build with minimal effort. The GitHub Marketplace has a lot of potential. I can use the ability to define actions across multiple repositories, which has me excited. Going forward, I’ll be migrating my other projects to Actions.

If you want to learn more about CI or building secure applications, check out these links: