the cap theorem is a tool used to makes system designers aware of the trade-offs while designing networked shared-data systems. cap has influenced the design of many distributed data systems. it made designers aware of a wide range of tradeoffs to consider while designing distributed data systems. over the years, the cap theorem has been a  widely misunderstood tool  used to categorize databases. there is much misinformation floating around about cap. most blog posts on cap are historical and possibly incorrect.

it is important to understand cap so that you can identify the misinformation around it.

the cap theorem applies to distributed systems that store state. eric brewer, at the 2000 symposium on principles of distributed computing (podc), conjectured that in any networked shared-data system there is a fundamental trade-off between consistency, availability, and partition tolerance. in 2002, seth gilbert and nancy lynch of mit published a formal proof of brewer's conjecture. the theorem states that    networked shared-data systems  can only guarantee/strongly support two of the following three proper   ties:

the c and a in acid represent different concepts than c and a in the cap theorem.

a venn diagram or a triangle is frequently used to visualize the cap theorem. systems fall into the three categories that depicted using the intersecting circles. 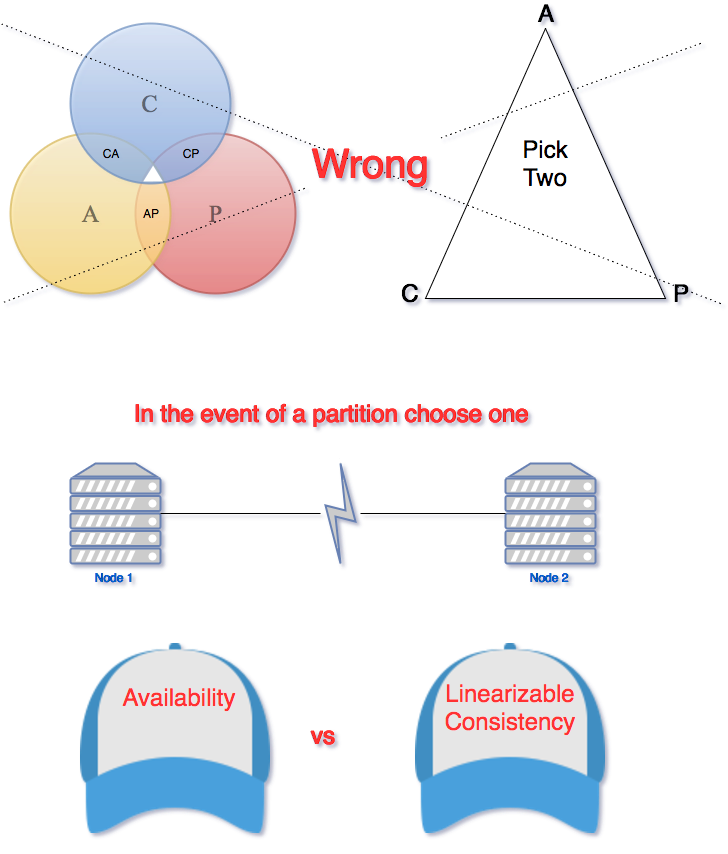 the part where all three sections intersect is white because it is impossible to have all three properties in networked shared-data systems. a ven   n diagram or a triangle is an  incorrect visualization  of the cap. any cap theorem visualization such as a  triangle or a venn diagram  is   misleading. the correct way to think about cap is that in case of a network partition (a rare occurrence) one needs to choose between availability and  consistency  .

network partition forces nonfailing nodes to reject clients' requests as these nodes cannot guarantee consistent data. at the opposite end of the spectrum, being available means being able to respond to a client's request but the system cannot guarantee consistency, i.e., the most recent value written. available systems provide the best possible answer under the given circumstance.

during normal operation (lack of network partition) the cap theorem does not impose constraints on availability or consistency.

according to brewer, the cap theorem prohibits only a “tiny part of the design space: perfect availability and consistency in the presence of partitions, which are rare." system designers have a broad range of options for dealing and recovering from network partitions. the goal of every system must be to “maximize combinations of consistency and availability that make sense for the specific application.”

Published at DZone with permission of Akhil Mehra. See the original article here.